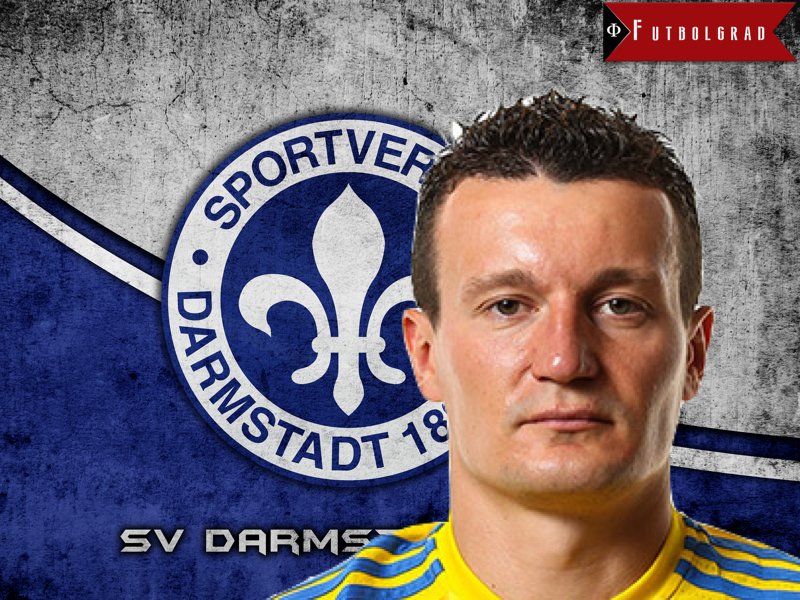 The picture shows Artem Fedetskiy smiling into the camera whilst undergoing the mandatory medical heart rate test for his new club, the Bundesliga side Darmstadt 98. Tomorrow Fedetskiy will join his new teammates, who are currently taking part in a training camp in Austria.

Fedetskiy’s former club, Dnipro Dnipropetrovsk has been experiencing significant financial difficulties, as their owner Ihor Kolomoyskyi has refused to pay debts owned to players, and former coaches. Fedetskiy was one of the players, who was forced to wait for outstanding salaries, and in April he told the Ukrainian news outlet Tribuna that “he couldn’t remember the last time he received a salary.”

Later Fedetskiy revealed that he hadn’t received his salary in eleven months, and that consequently, he and several other Dnipro players were leaving the club.

Due to Dnipro’s financial instability, the club were banned by UEFA for unpaid wages, and breaches of Financial Fair Play regulations. The Ukrainian Premier League and the Football Federation of Ukraine also threatened to sanction to club and, at one point, it ven appeared that Dnipro could be dissolved—instead the FFU seemed to have reached some sort of compromise, as the club is now promising to cut costs and, as a result, is starting the season with a very young squad.

Fedetskiy was one of several players who announced to leave the club, as a free agent at the end of the season—in fact the financial problems have meant that, overall, 14 players have left the club this summer. Many of the players, who were part of the successful squad that stormed all the way to the Europa League final in the 2014-15 season, have now left the club, Dnipro’s average age is now just 23.7, and the transfer value has sunk to just €8.1 million.

Meanwhile, for Fedetskiy, the move to Germany, and the Bundesliga in particular, means that the right back can finally show his skills in one of Europe’s top competitive clubs.

In fact, the Ukrainian was adamant that he would only move to a strong competition, and reportedly rejected offers from Israel, Major League Soccer, Greece, and some smaller clubs in Spain.

Indeed, the Bundesliga always seemed to have been his preferred choice, as he told the Ukrainian media that he was close to signing for Werder Bremen before the European Championships in France.

Instead, he ended up at Darmstadt 98, whose Cinderella story easily dwarfs that of Leicester City. Darmstadt finished the 2012-13 3 Liga (thid division) season in 18th spot, which would have relegated the club. But then Kickers Offenbach didn’t receive a licence for the 2013-14 season, and Darmstadt were saved.

The following two seasons the club, which has one of the smallest budgets in German professional football, was promoted first to Bundesliga 2, and then to the Bundesliga. Last season, Darmstadt’s manager, Dirk Schuster, formed a squad of Bundesliga rejects, and successfully fought off relegation.

Players like Sandro Wagner and Konstantin Rausch were considered surplus material at their old clubs, but both used the opportunity given them at Darmstadt to reassert their status as Bundesliga players. Unfortunately for Darmstadt, this has meant that they could no longer afford either player, and Wagner moved on to Hoffenheim, while Rausch went to 1. FC Köln.

Schuster also left the club to coach FC Augsburg. Yet, it is expected that sporting director, Holger Fach, will once again put together a strong squad by finding players like Fedetskiy, who have, without a doubt, the ability to play in the Bundesliga, but have been without a contract due to problems at their former clubs.

Fedetskiy is, therefore, in many ways, the perfect signing for Darmstadt, as the no nonsense right back, who plays a defensive first kind of style, has plenty to prove to his new club.