Champions League – Shaqiri out, but Liverpool remain a danger to Crvena Zvezda

It was an unhappy return to Anfield two weeks ago for the Crveno-beli. After their monumental two-one win in 1973, the modern day Serbians left Liverpool having been thumped by four goals to nil.

Matchday Four sees the two clubs go head-to-head once again. The hosts are rock bottom of Group C, while visitors Liverpool remain atop of the pile.

The SuperLiga record champions have been in blistering form domestically. Unbeaten since the start of the league campaign – June 2018 – they have amassed 43 points from a possible 45. However, it is their recent form in Europe that places them as underdogs as they welcome Liverpool to the Stadion Rajko Mitić.

Navigating the qualification rounds with relative ease, it has been the group stage that has left them looking short on ability and quality.

After a  positive start – holding Napoli to a goalless draw on Matchday One – their campaign has swiftly been followed by back-to-back defeats at the hands of PSG and Liverpool.

A healthy nine point SuperLiga gap was opened up on the weekend, thanks to an away victory at Proleter Novi Sad.  Radnički Niš are their closest domestic rivals, and they are somewhat short of the potential carried by Tuesday evening’s visitors.

Zvezda’s brief reacquaintance with Europe’s premier competition looks all but over, only a shock result against Liverpool could kick start any hope of playing European football come the new year.

Top of Group C and still unbeaten in the Premier League, Liverpool pose a real and present danger to their hosts on Tuesday evening.

Having dropped points against Napoli, the Reds stormed back to winning ways against Zvezda – dispatching their Serbian opponents four-nil two weeks ago.

However, their man of the match on that occasion – Xherdan Shaqiri, has been left out of the trip to Belgrade to avoid any ‘distractions’.

The Swiss international is of Albanian-Kosovan heritage, and it was his controversial eagle celebration against Serbia in Russia that led to his withdrawal from Tuesday’s fixture.

It’s a situation where we will go to the fantastic city of Belgrade as a football team to play football.

We have no political message, absolutely not, we want the focus to be on a great game of football, free from anything else.

We are keen to be respectful and keen to avoid any distractions that would take focus away from a 90-minute-plus contest that is important for football and only football.

So for that reason Shaq is not involved and he accepts and understands this” – Jürgen Klopp : liverpoolfc.com

Even without the impressive Shaqiri, Liverpool still have a plethora of talent to call upon.

While Napoli left Belgrade with just a point – and manged to take all three against the Reds in Naples – there are very few who would bet against the Meseryside club leaving without all three points on offer during Matchday Four.

Crvena Zvezda vs Liverpool – Players to look out for:

Both Marko Marin and Ben bring international experience to the home side, but it is Stojković who has been marked out as the man to watch by Futbolgrad’s resident Serbian journalist, Miloš Marković.

The versatile defender can play on either the right or left side, adding pace to the Zvezda attack. A product of the Red Star youth academy he returned to Belgrade in 2017 after a short stint with German side, 1860 München.

Strong in the air, he also possess the ability to break up opposition attacks and transition the ball forward. 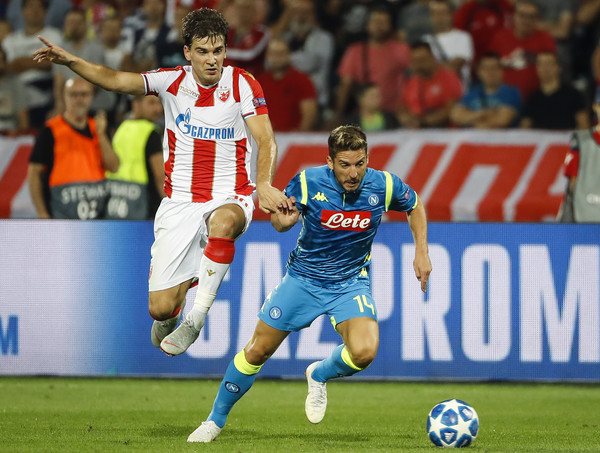 Filip Stojkovic challenges Dries Mertens during Matchday One of the Champions League, he will be one to watch when Crvena Zvezda vs Liverpool takes place. (Photo by Srdjan Stevanovic/Getty Images)

The Senegalese forward is a critical component of Liverpool’s much talked about front three. Together with teammates Roberto Firmino and Mohamed Salah, the trio lit up last seasons’s Champions League.

This time around the 26-year-old looks to have started where he left off. With a goal and assist in this season’s early stages – Mane also sits on six goals in 10 Premier League appearances.

Exceptionally comfortable on the ball, the forward is at home driving towards opposition defences. He is just as adept at combining quickly with those around him to bypass any defensive block. 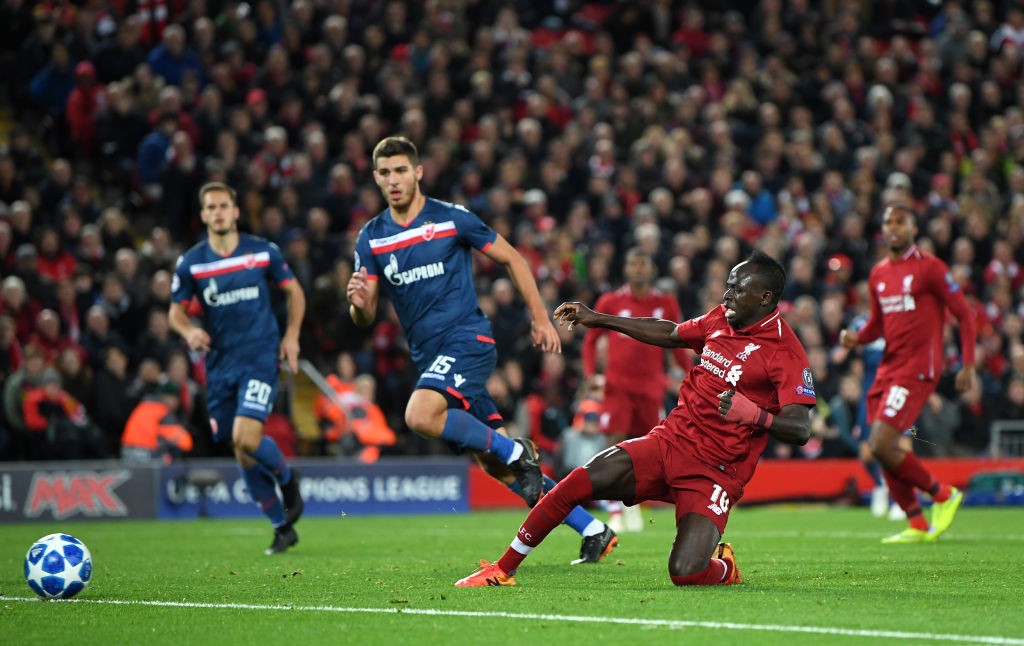 Sadio Mane scores his first Champions League goal of the 2018/19 season against Crvena Zvezda, can he do score another when when Crvena Zvezda vs Liverpool gets underway? (Photo by Michael Regan/Getty Images)