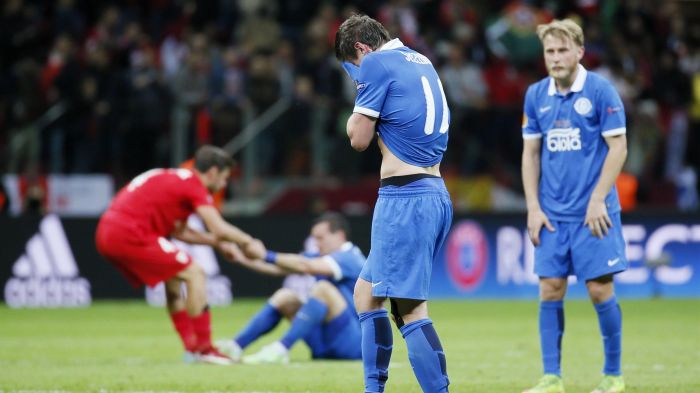 Dnipro Dnipropetrovsk – From Boom To Bust

Just months after being on the verge of European glory,  Dnipro Dnipropetrovsk are on the brink of all-out collapse.

Several weeks ago Futbolgrad ran a story on the complete lack of signings by the Europa League finalists. Very little has changed since then. Dnipro have completed the signing of just one new player, the Brazilian attacking midfielder Danilo, who came over on a free transfer from now-bankrupt Metalurh Donetsk. Results have been mediocre—Dnipro Dnipropetrovsk have just one victory in four matches and sit seventh in the table on five points.

While few players are coming in, several are set to leave the club. Yevhen Konoplyanka finally moved abroad after an extended transfer saga, but that was only the beginning. After Dnipro’s disappointing 2-1 loss at home to Dynamo Kyiv on Sunday, manager Myron Markevych revealed that many players have expressed a desire to leave:

“How can I lead a team if the players say they want to leave? They openly declare, either raise wages or release us. With whom do I keep working? Should I also leave?”

Among these players are midfielder Jaba Kankava, who is heavily linked with a move to French side Reims, and striker Nikola Kalinic, who has reportedly already agreed to terms with Fiorentina.

As it later emerged, Markevych does in fact want to leave the club. The day after the loss to Dynamo the manager told Tribuna that he wants to resign, adding “I still have two years remaining on my contract, so I hope that we can terminate our agreement by mutual consent.”

But on Wednesday Markevych said in an interview television channel Futbol 1 “I would like to leave, but for now I’m not being permitted. I don’t understand how the club can continue to develop. Many footballers have left.”

Considering that Markevych would have to pay $1 million in compensation to the club if he breaks his contract, it is no surprise that the club management is unwilling to accept his resignation.

Markevych’s frustration stems from the club’s lack of ambition and activity in the transfer market. The Dnipro manager has made it clear all summer that the club requires new signings to remain competitive, but as of now none of the rumored transfers have materialized.

This lack of investment is likely related to the heavy economic and political pressure currently facing club owner and chairman Ihor Kolomoyksyi. Last month the credit rating agency S&P lowered the rating of PrivatBank, the largest commercial bank in Ukraine, of which Kolomoyskyi is one of the primary owners. He is also engaged in a power struggle over control of his interests in the country’s oil and gas industry.

On the political front, the appointment of Mikheil Saakashvili as governor of the Odessa region at the end of May is widely seen as a move by President Petro Poroshenko to counter the influence of Kolomoyskyi. Saakashvili even directly accused Kolomoyskyi of being involved in contraband smuggling at the Odessa port.

Kolomoyskyi has already stopped financing the country’s basketball clubs, and there is very little to indicate that he will suddenly change course and decide to pour money into Dnipro.

As of now, Markevych is still with the club. But if the player exodus continues and no high-quality signings are brought in, it will be a long season for Dnipro fans. Another run at a European trophy now seems like a pipe dream.