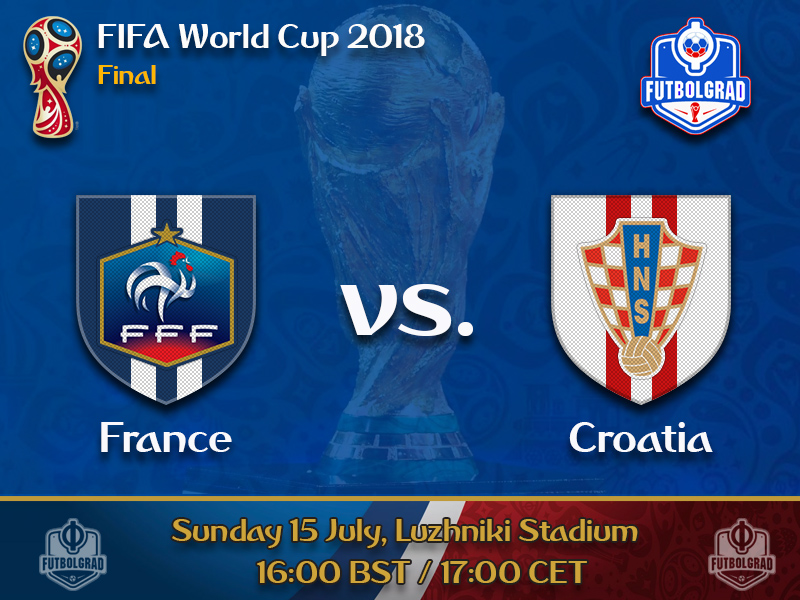 France vs Croatia will take place at the newly refurbished Luzhniki Stadium in Moscow. (Photo by Michael Regan/Getty Images)

Belgium’s players were fuming after the 1-0 defeat to France. “I rather lose with this Belgium side than win with this France side,” Thibaut Courtois told HetNieuwsblad. “It is their good right to play like that because they know that it will cause us problems. But it isn’t nice to watch. [France] aren’t better than us. They defended well, but that was about it. To be honest, I would have rather lost to Brazil than against this French side,” Courtois added.

Despite having its pragmatic defensive approach has defined one of the most talented attacking sides at this World Cup France. As a result, France has not been fun to watch at this tournament. But for France head coach Didier Deschamps the title will be the only thing that matters after losing the 2016 Europ final in his home country.

“We always have a unified idea. Everybody knows what they have to do to help the collective”, defender Raphaël Varane explained to the media on Wednesday. “Let people think what they want. We won that is the only thing that matters”, Antoine Griezmann threw back at the critiques following the match against Belgium.

20 years ago France already faced Croatia. Back in the semifinal of the 1998 FIFA World Cup in France, the result was 0-0 at halftime. Head coach Aimé Jacquet had lost it and was screaming at this team during the halftime talk. At that point, Deschamps got up and said: “The Croats are doing whatever they want. Some of us are attacking, and some of us are sitting back. From now we will sit back and fortify our defence and then we will attack in a collective effort.” France returned to the pitch and won the match 2-1.

It is an anecdote that says a lot about Didier Deschamps and this France team. The head coach is not about creative football and fancy match tactics. This Equipe Tricolore side is all about compact play and collective hard work. It is almost like Deschamps was given a Ferrari, which he is now driving 10 km/h below the allowed speeding limit not to damage it.

At the same time, it is a strategy that has brought France to the World Cup final – the third World Cup final in the last 20 years which makes the Equipe Tricolore the most successful national team on the planet. There is, however, a risk. Nobody will criticise Deschamps should he end up winning the title on Sunday but the floodgates of criticism will open up should his strategy fail on Sunday.

A floodgate of criticism is not something that Croatia head coach Zlatko Dalić will have to worry about. The relative unknown head coach, who was hired at the last minute ahead of Croatia’s crucial World Cup qualifier against Ukraine, has guided Croatia to their first ever tournament final.

It is a result, which nobody expected ahead of the tournament. In fact, the feeling in Croatia ahead of the tournament was that this side would likely fail to reach anything significant in Russia. “A collective of stars that are not able to work together”, the Futbolgrad Network was told by one fan ahead of the World Cup. “Dalić is not the coach to form a team, he also doesn’t have a tactical idea”, another fan added.

There is some truth in that statement. Croatia have not convinced by using an integrate tactical masterplan. Instead, Dalić seems to have gotten the most out of this team by allowing his players to play in a formation that makes them the most comfortable. In fact, much of this Croatia side seems improvised almost chaotic.

The lack of a plan of a plan was recently pointed out in Aleksandar Holiga’s Guardian piece “Croatia are the masters of improvisation”. In the article Holiga points to the lack of a plan when it comes to youth development and infrastructure. It is a culture that has allowed Croatian football to produce great individuals but also at the same time has meant that the country has struggled to come up with a collective that could win titles.

That collective is still absent at this tournament to a certain extent. Instead, it is the individual determination that seems to carry this team. It is a determination that was evident throughout the 120 minutes against England. Croatia had previously needed 120 minutes and penalties against Denmark and Russia to advance to the semifinal of the tournament. Despite the obvious toll that had taken on the players Dalić made no substitutions until extra-time.

“Nobody wanted to be substituted; they just wanted to carry on. They are an amazing bunch of players,” Dalić explained to the media after the match. The stamina of this Croatia side has been indeed impressive. The Vatreni have now played 360 minutes in the last three games, which is, in essence, another full 90 minutes played.

It is perhaps, the most significant advantage France will have in the final. The Equipe Tricolore have had an extra day of rest and managed to finish all their opponents in regulation time. At the same time, this Croatia side seems to be determined to go the final step, and there is a general sense that all players that emerged with knocks from the 120 minutes played against England will be fit for the final. As a result, the final will likely another battle of attrition that will likely be decided in extra-time.

France vs Croatia – Players to look out for:

The teenage sensation will once again be France’s key player. Against Argentina, the 19-year-old became the first teenager since Pelé to score two goals in a World Cup knockout match. Mbappé will also be the first teenager to feature in a World Cup final since Ronaldo was in the 1994 FIFA World Cup Brazil side. But unlike the famous Brazilian – Ronaldo did not play feature in any of the matches at the 1994 World Cup – Mbappé will not witness the match from the bench but instead be France’s key player. In a side that is defined through its collective defensive approach, Mbappé will provide the creative attacking outlet in the transition game that will be key against a physical Croatia side. 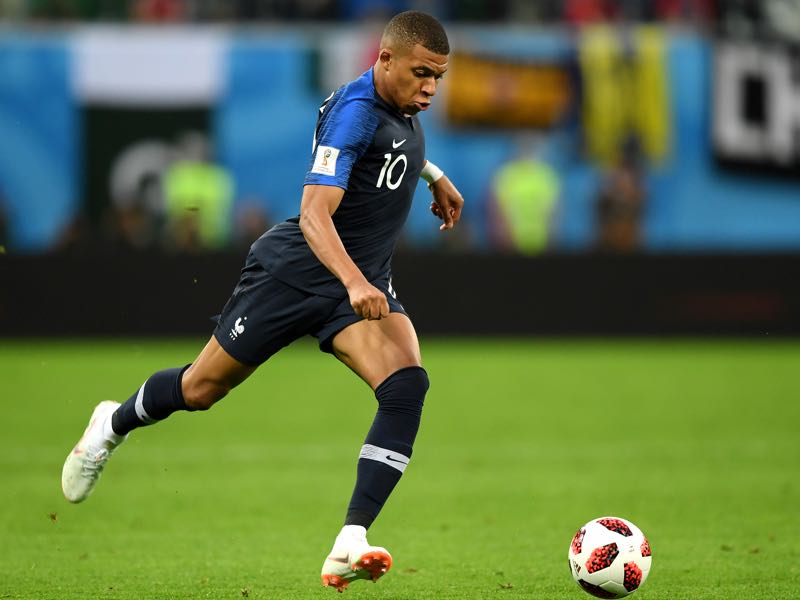 Kylian Mbappe of France in action during the 2018 FIFA World Cup Russia Semi Final match between Belgium and France. The teenager will be one to watch during the France vs Croatia match. (Photo by Shaun Botterill/Getty Images)

Luka Modrić is the brain of this Croatia side. The Real Madrid midfielder has, in fact, made a decent claim to become the player of the tournament. An elegant midfielder Modrić keeps this team of individuals together. Used both as a number ten and a number eight by Dalić Modrić is both an attacking threat but also a team player, who is not shy to track back to fulfil defensive tasks. Overall, however, Dalić seems to be convinced that Modrić best serves this team in a more forward role – despite, the fact, that he was used as a defensive midfielder against England. Against France’s defensive collective Modrić will likely feature as a number ten tasked with deciphering France’s defensive code by coming up with the key moment that could decide the 2018 FIFA World Cup final. 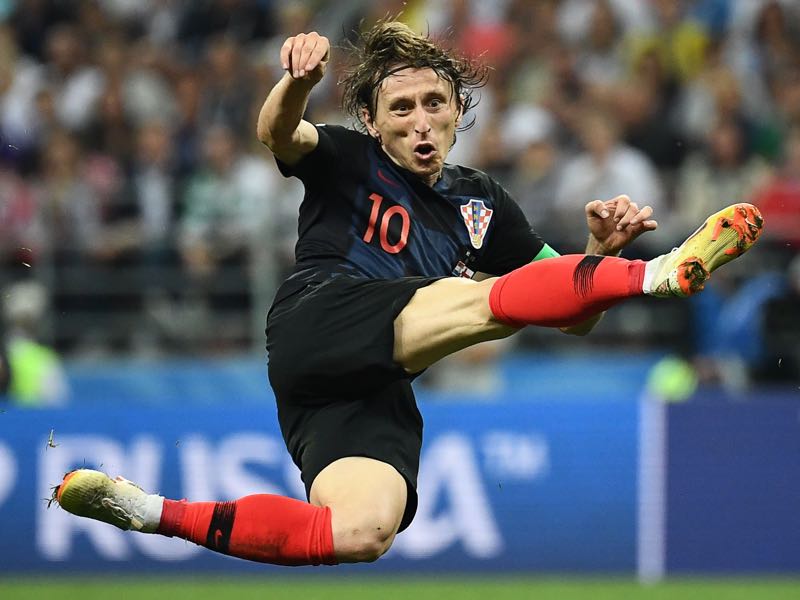 Croatia’s midfielder Luka Modric attempts a shot during the Russia 2018 World Cup semi-final football match between Croatia and England. The Vatreni midfielder will be another key player during the France vs Croatia match (Photo by FRANCK FIFE / AFP)