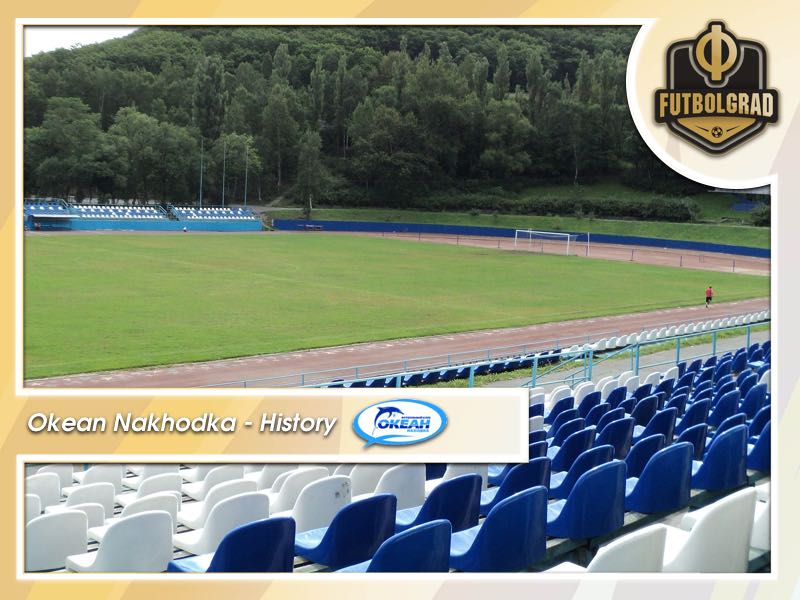 It is one of the biggest obstacles Russian football faces today. The sheer size of the country means that many clubs, especially from the Far East find it difficult to survive in the top flight. The most recent example is Yenisey Krasnoyarsk, the club from Central Siberia had to struggle with climate problems, long flights and financial short-comings this season and are likely to be relegated. Last year SKA Khabarovsk were the furthest east club ever to have played in the Russian Premier Liga, hit with a heavy travel schedule the club lasted just one season. Before Yenisey and SKA, Luch Vladivostok and Okean Nakhodka were clubs that represented the Russian Far East.

Located in the Pacific harbour towns of Vladivostok and Nakhodka both Luch and Okean were the only two clubs to ever represent the Russian Pacific Region in the Russian top flight. Although Luch Vladivostok is the better known of the two Pacific clubs, it was Okean Nakhodka that reached the top flight first. A member of the inaugural Russian first division Okean Nakhodka was one of twenty founding clubs of the first Russian national championship following the collapse of the USSR in December 1991.

Split into two groups Okean Nakhodka finished seventh in Group A, which meant that the club had to play in the relegation round for the second stage of the tournament. Here the club finished 13th, which qualified Okean Nakhodka for the first single stage Russian Top League, which was to be played in 1993. Luch, in the meantime, competed in the Russian First League, which was split into three groups (West, Centre and East). One club from each division would eventually be promoted, and Luch won their 16-team division ahead of Irtysh Omsk and joined KAMAZ Naberezhnye Chelny and Zhemchuzhina Sochi in the first division.

Luch Vladivostok and Okean Nakhodka – A local rivalry was not enough

Luch’s promotion meant that for the first, and only time, Russian football had a Pacific derby. Just 88km separate the two coastal towns – although the drive along the 186km coastal road takes almost three hours.

Once in the top flight, however, things were not that easy for the two Pacific clubs despite having a local rivalry to build upon. In the first decade of the Russian Top League, Russia struggled for almost a decade before the leagues reached a competitive playing level. Until then, the Russian league system experienced reforms and uncertainty. One component that was changed regularly was the size of the league. Altering the size of the league is a very public way of signalling reform without actually accomplishing much. The size of the first division does very little to improve youth development, the financial situation of clubs, or falling attendance figures.

In 1993, the Russian Vysshaia Liga consisted of 18 teams, already reduced from the 20 teams that played in the top flight the previous year. Further reform, however, was planned and the division was to be reduced to 16 for the following season. The hope was that fewer teams would create a better product on the pitch, as fewer “top clubs” would mean better football. But reformers failed to understand that it was not the number of clubs in the Vysshaia Liga that led to falling attendance numbers, but rather the overall poor product of the league, as stadiums crumbled and the football failed to live up to the standards set by the old Soviet Vysshaia Liga.

The clubs argued that the introduction of a free market economy within the CIS had resulted in a manifold increase in transportation tariffs, price spikes in food and hotel services, as well as the introduction of new currencies in the now sovereign Republics of the former Soviet Union. Furthermore, the clubs were worried about the political situation in many of the now sovereign republics. As it would turn out, they would also have a similar problem with the likes of Okean Nakhodka and Luch Vladivostok playing in the Russian first division.

In the 1990s going into the 2000s, match-fixing was one of the most pressing issues in the Russian game and caused fans to lose trust in the integrity of the league. The origin of “friendly games” as they are called in the post-Soviet space does not stem from betting, but instead from predetermining results similar to the Italian tradition. The legendary Ukrainian head coach Valery Lobanovskyi was, in particular, fond of pre-arranging fixtures, making good use of the two-point system that was used in the USSR he would aim for winning all his home games and drawing on the road. It was a mathematical formula that almost always guaranteed success.

The big Moscow clubs may have also done the math following the conclusion of the 1993 season. Travelling twice to Pacific for away games after all was a costly affair – especially given the difficult financial situation in the immediate post-Soviet collapse.

Controversy, however, surrounded this tournament, and Okean Nakhodka later alleged that matches were fixed to ensure that the Pacific clubs would go down. Played in Moscow Okean Nakhodka struggled playing away from home and collected just one point from the five matches – a 0-0 draw against Lada Togliatti. In the end, the club from the Pacific finished last. Luch Vladivostok, in the meantime, finished fourth even on points with third-placed Dinamo-Gazovik Tyumen, who as a result were promoted to the Russian Top League.

A 2010 report on match-fixing by Sport Ekspress journalist Igor’ Rabiner supports this allegation. According to Rabiner, match-fixing was used to ensure that Vladivostok and Nakhodka would go down because teams in the Russian Premier League did not want to travel to the Russian Pacific region. In the light of the memorandum of the big five Moscow clubs that torpedoed the creation of a CIS championship, Rabiner’s allegations make sense.

The European clubs of Russia’s championship could not afford to have their teams travel all the way to Russia’s Far East region. Rabiner’s story becomes even more significant when one looks at the league reforms for the 1996 season, in which the league was expanded back up to 18 teams; clearly the reform that reduced the league to 16 teams was intended as measure to rid the Russian Vysshaia Liga of the two clubs based in the far east of the country.

Clubs from the Far East continue to face hostility whenever they do manage to reach promotion to the top flight. Russia’s former national team keeper Igor Akinfeev even at one point suggested that Luch Vladivostok would be better of “playing in the Japanese league.” Geographic realities in the world’s largest country, however, mean that clubs from the Far East make it to the top flight on a regular basis.

Luch Vladivostok, for example, last reached the Russian Premier Liga in 2006 and stayed in the top flight until the end of the 2008 season.

And Okean Nakhodka? The story was more complicated for them. The 1998 Russian Economic Crisis hit the city of Nakhodka hard. Dependent from the local canning and fishery industry the money simply ran out for past-times such as professional football. At that time Okean Nakhodka had been relegated all the way down to the Russian Professional Football League (second division). In 2005 they came close to achieve promotion back to the Football National League when they finished runners-up behind Metallurg Krasnoyarsk.

The story seems to end in 2017 when the club ceased to exist due to financial problems. Recently, however, there have been rumours that Okean Nakhodka could return in the 2019/20 season. Whether that will be the case remains to be seen – for now, the original Okean Nakhodka remains an intriguing part of post-Soviet professional football history as the 1993 relegation continues to cause consternation in the Russian Far East.