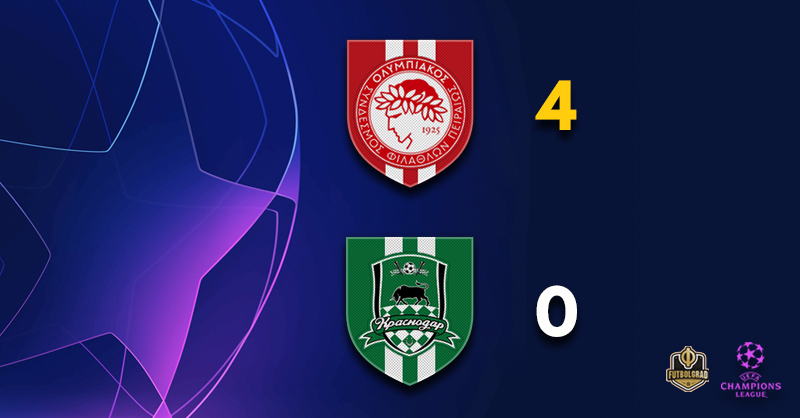 A loud and hostile atmosphere greeted the Russian side Krasnodar in Piraeus. But the Bulls did well to withstand the early pressure and Murad Musaev’s men just started to settle a bit when they lost new signing Remy Cabella to an injury. The French winger went down in what appeared to be a knee injury and after trying to play on had to be taken off in the 24th minute.

Olympiacos quickly took advantage of the restructuring in Krasnodar’s midfield and striker Miguel Guerrero had the space to score a curled effort in the 31st minute. Olympiacos were firmly in control and just before halftime Daniel Podence, and Mathieu Valbuena had chances to double the lead.

Olympiacos’ dominance continued in the early stages of the second half, and Krasnodar reacted bringing on Shapi Suleymanov for Younes Namli, who had been largely ineffective, in the 58th minute. And the 19-year-old Russian striker almost scored on his first shot just one minute later. Krasnodar were now more vertical playing the ball faster forward, and Marcus Berg had keeper José Sa beat with a shot from outside the box, but the ball missed the target.

Instead, Lazar Randelović scored Olympiacos’ second fo the game. In the 78th minute, Mathieu Valbuena was given to much space in midfield and picked out Randjelović’s run with a phenomenal pass that send the Serbian into the box where he slotted the ball past keeper Matvey Safonov. Randjelović was not done there, however. In the 86th minute, the Serbian scored a his second with a shot from outside the box. But Olympiacos were not done there, because in the 88th minute Podence added a fourth in what was a miserable night for the Russians overall.

The 22-year-old Serbian striker came on in the 76th minute and quickly decided the game in Olympiacos’ favour with two spectacular strikes. On loan last year at Radnički Niš the Serbian wants to crack Olympiacos’ first team this season and judging from this game will have a fantastic chance of getting some significant playing time both in Greece’s domestic league but also in the Champions League.

The former French national team player had a slow start to the game but came to life in the second half with Krasnodar pressing forward. The 34-year-old playmaker now took control of the attacking third and his pass ahead of the second goal was a piece of artwork. An impact player when on form Valbuena highlighted that he can still be a difference-maker.

Marcus Berg was brought in from Al Ain Club this summer to add some much-needed experience. The 33-year-old striker, however, snatched at his chances today and was brought off in the second half. We will never know what would have happened had his shot just ahead of his substitution gone in, as it stood it looks like his depth signing will be mostly used in the Europa League rather than the Champions League this season.

Although Olympiacos still have to see out the result in Krasnodar, there is little doubt that they will join PAOK in the group stages of this year’s competition. Once qualified this will be the third year in a row a team from Greece will have qualified for the Champions League group stages, perhaps a sign that Greek football is experiencing a bit of a revival? Meanwhile, Krasnodar will have to wait another year to qualify for the Champions League group stage.