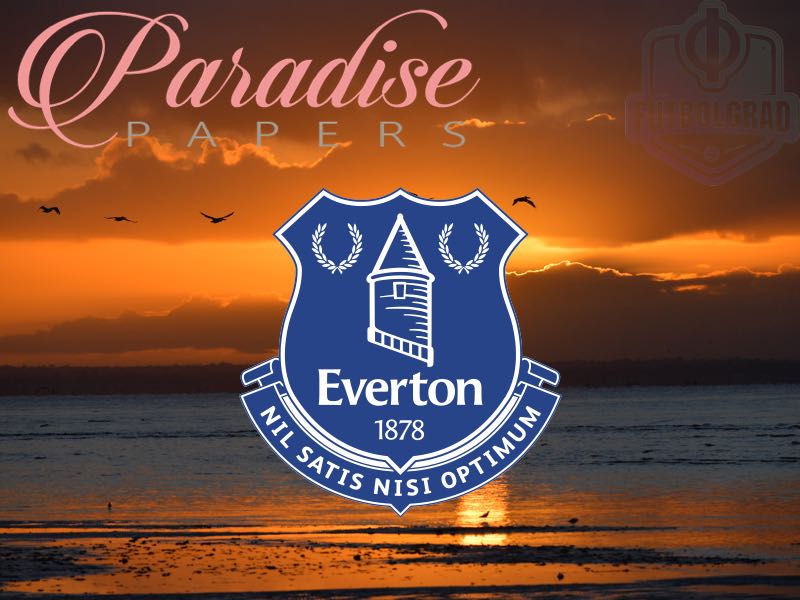 This evening the BBC investigative programme “Panorama” ran the first of two episodes looking at offshore finance, in particular, the so-called Paradise Papers.

The programme on the Paradise Papers spent a considerable amount of time examining Alisher Usmanov and Farhad Moshiri’s investment in Arsenal and Moshiri’s subsequent acquisition of Everton shares.

As I have described in detail below (and here), Usmanov and Moshiri set up a company Red & White Holdings to acquire Arsenal shares in 2007. R&W Holdings was owned 50/50 between Moshiri and Usmanov.

Between August 2007 when Dein sold his 14.58% stake in Arsenal to R&W, to just before the American businessman Stan Kroenke secured 62% in a takeover in April 2011, R&W acquired 27% of Arsenal. Ultimately at the time, Moshiri sold his stake in R&W to Usmanov in February 2016 the company held 30.04%. Panorama now suggests that the funds used to acquire the Arsenal shares came from an Usmanov company Epion Fundings.

Because Panorama suggests the funds came from an Usmanov company, the inference is that Moshiri’s shares in R&W were effectively a gift from Usmanov to Moshiri.

This allegation is both denied by Moshiri’s lawyers and Usmanov himself. In February 2016 Moshiri sold his 50% stake in R&W Holdings to acquire his 49.9% stake in Everton. Premier League rules required Moshiri to dispose of his Arsenal shares held indirectly before acquiring his Everton stake.

For the Moshiri acquisition of Everton shares to go ahead the Premier League, however, had to give its approval first. That approval included an investigation into the arrangements between Moshiri and Usmanov.

The Panorama team infer that because of the supposed gift, Usmanov’s money was used to acquire Moshiri’s stake in Everton. From a legal perspective this does not stand up, a willing donor makes a gift to a recipient, and the title (ownership) passes from one to the other. So even if it was a gift (denied by both Moshiri’s lawyers and Usmanov), it’s a strange conclusion for Panorama to reach.

The Guardian have responded to the Panorama Paradise Paper special by the BBC by publishing an article that includes the following: “The Guardian has been shown a document in which Epion did acknowledge receiving payment from a company owned by Moshiri for his half of the Arsenal stake, in full.”

The Premier League have made the following statement:

“We would not disclose confidential information about clubs or individuals but can explain our general rules and policies in this area. The Premier League has wide-ranging rules in the areas of club ownership and finance. These include prospective new owners having to meet the Premier League Board and provide extensive detail on the sources and sufficiency of funding they have in place. They must also submit information on the financial structure of any proposed investment, and a business plan demonstrating that all liabilities can be met for at least 12 months ahead.”

The statement further read: “The League prohibits any club owner or director from having an interest in another club, or the ability to influence another club’s policies. Should a prospective club owner have previously held shares in a different club, they must provide evidence that they have been divested. Only when these and many other rules have been applied, and due diligence completed, will the Premier League Board allow an investment to proceed.“

Usmanov’s lawyers were also contacted by the BBC show, and they denied that he had any involvement at all with the Blues. Usmanov’s representatives told Panorama: “He has no say, control or influence in the running of Everton Football Club. Our client does not and never has owned or controlled Everton.”

Paradise Papers – The Role of Bridgewaters

Part of the programme on the Paradise Papers also examined the role of a company called Bridgewaters in the Isle of Man. Like many other similar companies, Bridgewaters provide corporate services, offshore administration and organisational management to thousands of businesses.

If not handled the right way allegations made in the BBC Panorama programme on the Paradise Papers could damage Moshiri and Everton. (Photo by Jan Kruger/Getty Images)

The BBC alleged that Bridgewaters was bought by Usmanov in 2011. Both Bridgewaters and Usmanov deny this. This is something of a red herring, the role of Bridgewaters is to act as an administrator and provide corporate services. It does not in any way control the investment activities of Blue Heaven Holdings.

I have to say that the allegations made do not concern me at all, I do not believe for a second the Premier League will do anything other than referring to their statement above. I am concerned though about the reputational damage to Everton, even if there is no substance to the claims made. This sort of publicity does damage the brand and the good standing of the club affecting potential commercial deals, and possibly even the ability to attract players.

It is therefore even more critical that Everton use the media and broader public relations to ensure that the club is not damaged in any way. As we have said many times on #EvertonBusinessMatters this is not a strong point for the organisation and must be looked at in the light of these allegations, ensuring positive messages and the understanding that shareholders, the club and the English Premier League have acted properly and in compliance with the Premier League regulations.

It is usual in these circumstances for the lawyers to suggest minimal or no comment. However, even minimal comment if made can still be powerful and back up statements made by the Premier League, Usmanov and Moshiri.