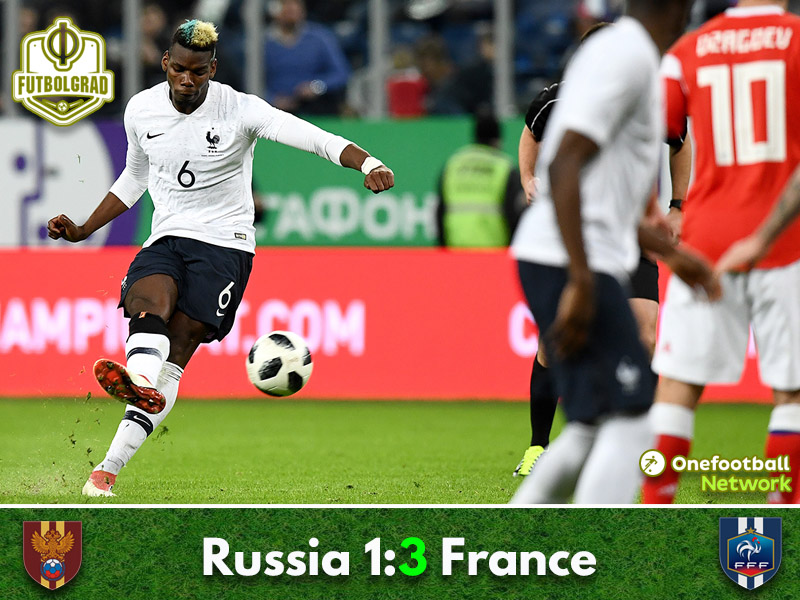 The most expensive teenager of all time struck twice to give former world champions France a commanding win in St. Petersburg. His opener just before half-time came from a perfectly-weighted pass from Paul Pogba before the Manchester United man added a second right after the break with a sumptuous free kick after he had been fouled by Aleksandr Erokhin, and despite Fedor Smolov finishing off a clinical counter-attack with just over 20 minutes remaining, France held firm in the face of intense pressure from the hosts.

Aleksandr Erokhin’s surprise inclusion ahead of Spartak Moscow captain Denis Glushakov in the centre of midfield had mixed results as Paul Pogba’s potential to dominate proceedings was neutralised comfortably. The Manchester United man played as the most advanced of France’ midfield trio, but Adrien Rabiot and N’Golo Kanté did the majority of the legwork without a tangible end product. With Alan Dzagoev given more license to support Fyodor Smolov, it was the hosts who threatened to break the deadlock.

Pogba did provide the first major concern halfway through the opening period with a beautifully judged chip over the out-rushing defence. Spotting his usually more defensive teammate Kante racing through, his lofted pass was gently tapped back to Anthony Martial, whose mishit slice fell to Kylian Mbappé eight yards out. The Paris Saint-Germain teenager’s first-time effort flew straight at Andrey Lunev, and the danger was cleared, but notice had been served of Pogba’s class.

Five minutes before halftime, it was his slide-rule pass that sliced through Russia’s resistance. Granat misjudged his slide to intercept the ball, leaving Mbappe to cut inside onto his right foot and slot a firm effort inside Lunev’s near post. It was harsh on Granat who had barely put a foot wrong, notably winning three consecutive 50-50 challenges against Mbappé after 10 minutes.

Minutes later, the goalscorer almost turned provider with a wonderful stepover to evade Granat again, but Martial’s effort was blocked at point-blank range by Lunev. Getting a taste for danger, Martial burst into the box just before the break under intense pressure from Samedov. Although the Frenchman went down in the six-yard box, the referee was not moved.

Russia had started competitively, with Golovin and Dzagoev fighting the physical battle against Pogba well. Golovin, in particular, played with the maturity of his usual midfield partner Glushakov, holding off the attentions of Kante and getting forward to supply Dzagoev and Smolov. Three minutes from the restart, however, the Erokhin experiment began to falter. Pogba’s immense strength held off the Zenit St. Petersburg midfielder’s attention, leaving the latter no choice but to wrestle the Frenchman in an attempt to win possession. From the inevitable free kick, Pogba himself lifted an unstoppable effort curling over the wall and into the bottom left corner.

Anton Miranchuk’s beautiful drag-back threw Koscielny off guard and winning a corner. Rausch took it deep and long to Smolov, whose volley could only be palmed out by Lloris to Granat. Six yards out his left-footed lunge excruciatingly fell wide. Hope arrived moments later through a fabulous counter-attacking goal for Russia. Smolov won a flick on to Erokhin, who played it into acres of space for Smolnikov down the right. A quick look up showed him Smolov was racing into the box, and his deep cross cut out the French backline to find the frontman at the back post. His cool left-foot finish gave Russia hope going into the last 20 minutes.

Smolov had seen a close-range effort blocked from a well-worked move involving Yuriy Zhirkov and Alan Dzagoev in the first half, and his appetite for more grew after the lifeline. With less than ten minutes remaining, however, Roman Neustadter was sent sprawling by Mbappé’s phenomenal footwork, leaving a Lunev to only get a faint touch on his powerful low finish.

Kylian Mbappé was unstoppable in his brightest moments, even though Aleksandr Samedov and Vladimir Granat were meticulous in their attention towards him. Granat, in particular, was due a stern test after failing to get to grips with Brazil’s fantastically talented forward line last Friday, but he could find no answer to Mbappé’s skill and composure to give France the lead just before the break. Paul Pogba grew into the match as the first half progressed, but he needed the electric pace of his young forward to feed his passes in to. 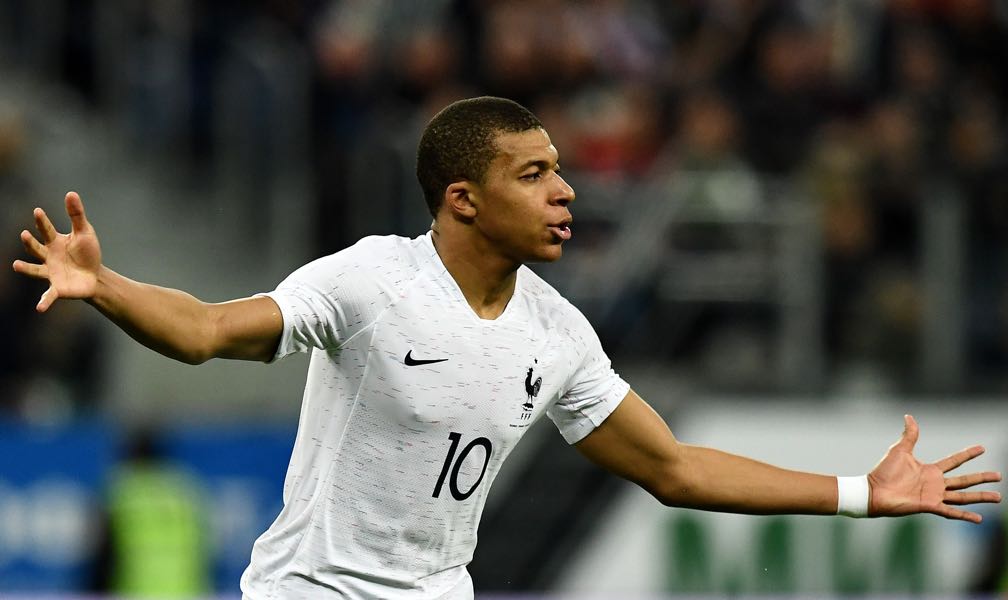 Kylian Mbappé was the man of the match. (FRANCK FIFE/AFP/Getty Images)

Kylian Mbappé was a constant thorn in Russia’s side with his speed, but it also landed him in a spot of minor trouble. Not long after Pogba had doubled France’s advantage, he burst through a gap in the Russian defence with only Roman Neustädter near him. The Fenerbahce defender flicked a foot that grazed Mbappé’s leg, which prompted the attacker to collapse to the ground looking for a penalty, but instead, all he saw was a yellow card. His wry grin afterwards suggested it was merited, but by then the match had all but been decided.