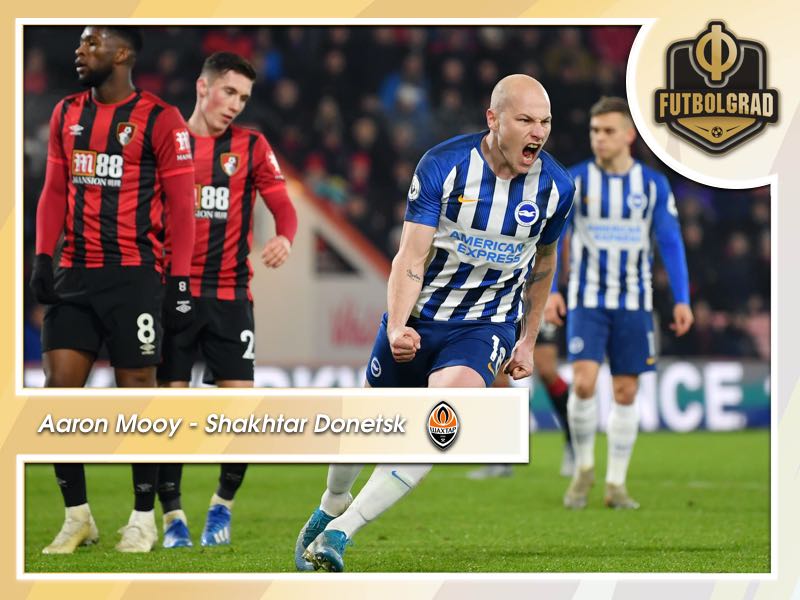 Brighton believe they have done a brilliant piece of business after signing Australian international Aaron Mooy on a permanent deal. However, a  quiet ending to the window still looks the likely thing to happen.

Mooy has signed a three-and-half year deal after impressing on loan. The Seagulls have secured his services at an overall cost of less than £5 million. The 29-year-old has made some stellar performances for Brighton in the current campaign, including a man-of-the-match performance against Arsenal in December.

Brighton are still open to making bargain deals if the right opportunity comes along. Blessed with proper ball control, a good passing range and long-range shooting as well, Mooy would be adding a lot to the Brighton team (now he’s been confirmed permanently). In this current market, £5 million is a proper steal for a player of Mooy’s abilities.

While Albion are pleased to be getting the 29-year-old, the news comes as a blow to Shakhtar Donetsk. The Ukrainian side were in contact with Mooy’s representatives and were hopeful a deal would materialize after Mooy’s loan deal is completed. Unfortunately for them, Brighton came with a deal Mooy’s agent couldn’t resist and it made sense for the Australian to make his move permanent.

The fact that Mooy has also spent most of his time in England made the deal more reasonable to him than moving outside England. Being famous back in his hometown, mobile betting sites in Australia already placed good odds on Mooy moving to Shakthar Donetsk in a deal that could have been up to £10 million including bonuses. Regardless of the links to Ukraine, Brighton boss Graham Potter revealed himself and key figures have always been very confident of keeping Mooy on board beyond his loan deal.

They confirmed things had been made more permanent yesterday morning. Albion head coach Graham Potter said: “We are delighted to have agreed a permanent deal with Aaron and Huddersfield. He’s been an important player for us and will have a key part to play going forward. “We knew what Aaron would bring, and he’s proved to be an excellent addition to our squad and a great professional both on and off the pitch.”

It is understood Albion remain confident the squad they have can guide them well away from the bottom three before the end of the Premier League season. Mooy also revealed that fellow teammate and Australian international Matt Ryan was a key figure in his decision to sign permanently for the Seagulls.

As per Brighton’s official website, Mooy said that his interest in joining the club’s set up was fueled by goalkeeper Ryan who encouraged him to join the Seagulls permanently. “You never know what to expect in football, but I spoke to Maty Ryan a few times before I joined, and he told me good things,” Mooy explained.

“We have always been good friends and he was right with what he told me. I’m enjoying the training ground, the stadium, the fans, the city and everything else. Mooy has impressed in a Brighton team that currently sit 15th in the Premier League and believes they have the quality to escape relegation this season.