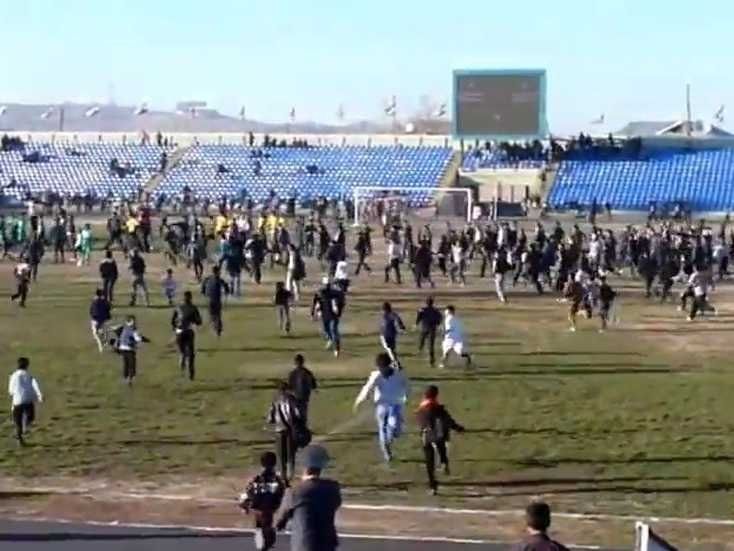 Tajikistan’s footballing prestige was dealt a triple blow this month as FIFA rankings published on November 7 confirmed that the national team has now dropped one place to 137th in the world. This came a day after new Serbian head coach Nikoli Kavazovich issued a public apology following a 6-1 drubbing by Iran, and a day before a Tajik league match erupted into violence amid bribery concerns.

The country’s new FIFA ranking puts them eight places behind fellow Central Asian strugglers Turkmenistan and three ahead of UEFA wooden spooners Kazakhstan. By way of a contrast, Uzbekistan have now risen to one place above Scotland in 69th, while Kyrgyzstan prop up the CIS pack in 200th place.

On Tuesday November 6 at Tehran’s Azadi stadium, a friendly match between Iran and Tajikistan saw the latter of the two Farsi-speaking nation pummelled 6-1. For Kavazovich, who became Tajikistan’s manager at the end of last month, it was a humbling way to begin his time in charge.

The Iranians opened up a 4-0 lead on their Central Asian cousins before half time, snatching another after the break before Tajikistan‘s Sohib Savankulov registered a consolation in the 68th minute. The rout was rounded off by a Alireza Abbasfard goal  in the final seconds of the game.

The new head coach apologized to fans but urged them to put the defeat into perspective.

“I thought that if we had scored in the first fifteen minutes, we might have got a result. We have to strive and endeavor. Our team does not have much experience of games against teams such as Iran. Despite the defeat, I am calm and I believe in the team of Tajikistan,” the defiant Kavazovich said. 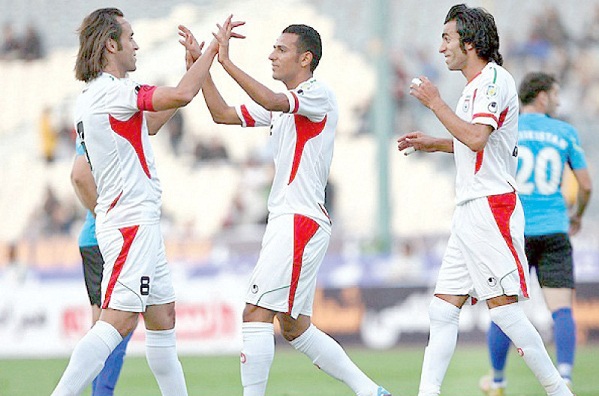 Iran celebrate another in the 6-1 romp over Tajikistan

Kavazovich further argued that it was too early to compare his team with the Iranian national team, currently fighting to qualify for the 2014 World Cup, with Tajikistan having fallen at the first hurdle.

“We had little in the way of preparation for the Iran game – only four workouts. We must honestly admit that our level right now is Challenge Cup level,” he said.

Kavazovich’s ambition is to qualify for the 2015 Asian Cup in Australia – a long term plan for a man on a short-term deal: his current contract will run until the end of April.

“We must send a clear message that the friendly match with Iran was held because I, as head coach, wanted us to play against a strong opponent. I want us to understand the level which we are at currently, and where we will be in two years. I can promise fans of the national team that we will be respected not only in Asia but also all over the world. We just need time and support,” Kavazovich asserted.

If something positive did come out of the thrashing, it was a pledge by the Iranian Football Federation President Ali Kafashiana and General Secretary Mehdi Mohammad Nabi to support the development of Tajik Football. This was a welcome positive story for a nation whose football has lately been making headlines for more unsavoury reasons.

Under a YouTube clip of the melee, a commenter said simply: “Animal Instincts 1: 0 Civilization”.

Meanwhile, one Tajik blogger, after the latest pitch invasion scandal blighted a game between Istaravshan FK and Energetik Dushanbe in the domestic league, wrote:

“Football in Tajikistan is politics. Who heads the Football Federation? President’s son. Whose football club always wins? The club of the president’s son. Too much politics. And everyone knows that our referees can be bought and sold. This is clear in every match. Football players and fans are not idiots, they see everything. This is why they are all angry and ready to explode at any moment.”

Actually, the team owned by Rustam Emomali, Tajik President Emomali Rahmon’s son, did not feature in the game abandoned on November 8, but his increasing passion for the beautiful game continues to make the Tajik version of it all the more ugly, as well as throwing up some national security concerns for his Dad.

Since Rustam has been President of the Tajik FA, the club he chairs, Istikol, have come from relative obscurity to cruise to domestic championships, with a squad boosted by foreign imports and Rustam himself occasionally playing up front. To say Rustam has ‘presence’ is an understatement.

In June 2011, a highly contested victory for Istikol over FC Ravshan, a club based in Rahmon’s home region of Kulob, kicked off a riot that left the referee dodging projectiles and police breaking up a brawl with smoke grenades. The November 8 pitch invasion was mild by comparison.

The central problem is that soccer fans traditionally go to matches to forget about things like pervasive corruption, organized crime and double-digit inflation, but Rustam’s unbeaten (and domestically unbeatable) team has a nasty habit of jogging their memories. Referees and linesmen are already in his pocket, so the battle to become Tajikistan’s second best team has turned into a bidding war. 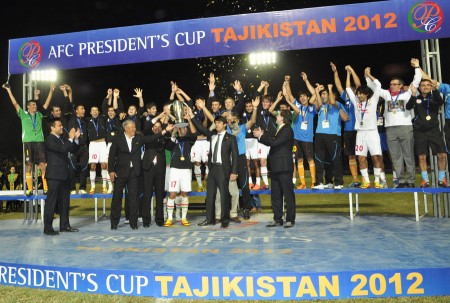 Istikol were victorious in the 2012 AFC President’s Cup

Followers of teams that suffer from poor decisions vent their frustrations in the worst way, registering their disgust at officials both on and off the pitch. With scenes like these repeating themselves every season, football is fast becoming one of Tajikistan’s many political hot potatoes.

But from the perspective of Rustam Emomali’s club, so far so good. Not only have Istikol secured domestic trophies, but they also won the AFC President’s Cup for the first time this autumn. The AFC President’s cup is a bizarre tournament designed for teams from countries too lowly ranked to have clubs competing in the Asian Champions’ League.

Nevertheless, for teams from countries like Tajikistan, Kyrgyzstan, Bhutan, Bangladesh and Sri Lanka, it is just about the best silverware that can be won.

While many Tajik citizens will wonder who is paying for Istikol’s success, hardcore football fans are just eager to see the cash spread slightly more evenly and the rule of law applied to football matches. The fact that the federation chief owns and plays for the best team in the league is not the only conflict of interest: Tajikistan’s new head coach Nikoli Kavazovich is also managing Istikol.