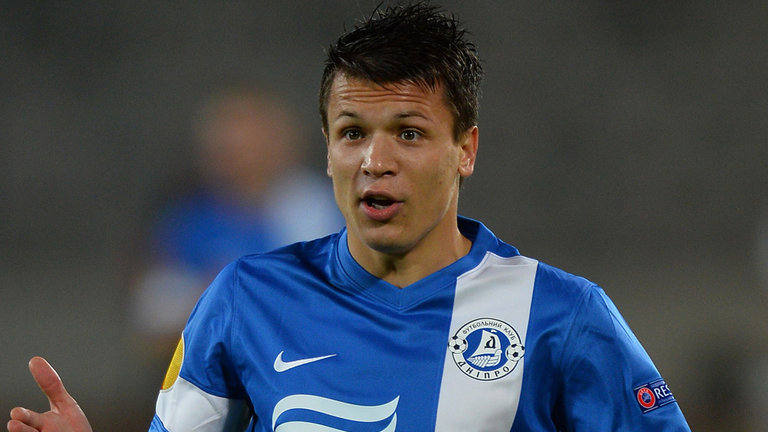 The Chase for Yevhen Konoplyanka

Sami Khedira’s free transfer to Juventus Turin means that Yevhen Konoplyanka is the biggest free agent signing left on this summer’s transfer market. With a transfer value of €18 million the Europa League finalist is valued just €2 million less than Khedira, who won last year’s World Cup in Brazil with Germany.

Interest in Konoplyanka is high with several clubs, including Borussia Mönchengladbach, FC Sevilla, Lazio Rome, and Bayer Leverkusen all thought to be interested in signing Dnipro Dnipropetrovsk’s star midfielder.

Reports from England that suggest that Konoplyanka could be close to be signing a deal with Stoke may, however, have been premature. Stoke has been vocal about wanting to sign the player, but Dnipro’s chief executive Andriy Rusol tells BBC that “there are a lot of clubs interested in Konoplyanka but now I can’t tell you anything about his future.”

While Stoke certainly has the resources to sign Konoplyanka, it remains questionable whether or not Konoplyanka would be willing to sign for a team that did not qualify for next year’s edition of the UEFA Champions League.

This would also mean that clubs such as Tottenham Hotspurs or Liverpool, which have been previously interested in signing the Ukrainian, might not be on Konoplyanka’s list of potential destinations. Also realizing that they might not be able to acquire Konoplyanka, Tottenham has since turned its attention elsewhere.

The fact that Konoplyanka only wants to sign for a club that has qualified for next year’s Champions League does indeed mean that clubs like Borussia Mönchengladbach, FC Sevilla, Lazio, and Bayer may have the best chance to land Konoplyanka. Another option may be AS Roma, which was close to signing the player in January, and have since qualified for Champions League football.

But the failed transfer from Dnipro to AS Roma highlights the difficulties of transfers from Ukraine to Western Europe. This was especially highlighted by Henrikh Mkhitaryan’s odyssey from Shakhtar Donetsk to Borussia Dortmund in July 2013.

Konoplyanka’s transfer to Liverpool in the winter of 2013-14 for example was cancelled at the last minute by Dnipro owner Ihor Kolomoyskyi, who refused to sign the transfer documents despite the fact that Konoplyanka had an exit clause in his contract.

Kolomoyskyi also appeared to be instrumental in Konoplyanka’s failed transfer to AS Roma this last winter, as the powerful Dnipro owner wanted to retain Konoplyanka in order to increase Dnipro’s chances in the Ukrainian Premier League, but also in the Europa League. Kolomoyskyi has long dreamed of breaking the stranglehold of the big two, Shakhtar and Dynamo Kyiv, on Ukrainian football.

Futbolgrad has since learned that Kolomoyskyi promised Konoplyanka more money in a new contract if he would stay with Dnipro until the end of the 2014-15 season. In return Kolomyskyi would receive a fee from whoever will sign Konoplyanka this summer. This means that technically Konoplyanka remains a free agent, but that he might not be completely free to negotiate a deal with whichever club he choses.

As I was told by another source, this is a deal typical for Ukrainian football. According to these sources Konoplyanka is indeed a free agent, but parts of his contract are owned by Kolomoyskyi in what could technically be described as a Third-Party Ownership deal. This would explain why members of Dnipro’s front office, such as Rusol, have been vocal about Konoplyanka’s potential next move.