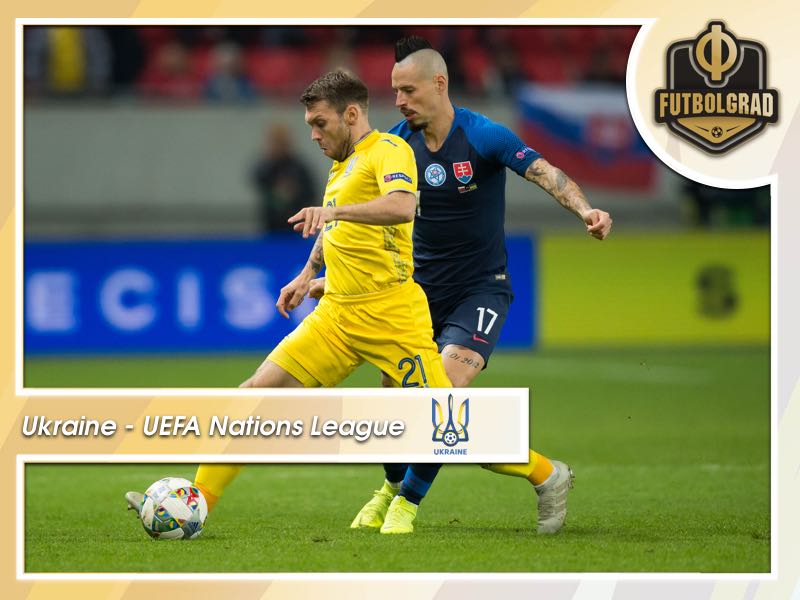 UEFA’s 55 national teams competed against one another in what has been deemed as a successful tournament. The UEFA Nations League saw plenty of drama as national teams such as Croatia, Poland, Germany, Slovakia and Ireland were relegated to the lower leagues. Meanwhile, traditionally weaker sides like Ukraine, Bosnia and Herzegovina, Denmark and Scotland were promoted to the higher divisions.

Switzerland, Portugal, the Netherlands and England will also feature in the competition’s first series of semi-finals. The semi-finals and final will be held in June 2019.

The final group standings of the UEFA Nations League will be used to determine the seeding for the Euro 2020 qualification cycle. Teams that won their groups are also guaranteed a second-round playoff spot in the Euro qualifiers (although they still may automatically qualify via the normal qualification process).

Following the retirement of veteran players such as Peter Čech, Thomáš Rosický and Jaroslav Plašil, the national team had to rely on several new players to help them compete in the UEFA Nations League. Moreover, in order to avoid being relegated to the competition’s League C, the national team underwent a series of managerial changes.

The decisions made by the Football Association of the Czech Republic paid off. Although the Czechs lost both of their matches against Ukraine, they were able to overcome the Slovaks on both occasions. Patrik Schick, who proved to be breakout player for the Czech national team, played a vital role in these efforts. Their performance means they will remain in League B and will have to look toward the 2020/21 UEFA Nations League as their next opportunity to gain promotion. In the meantime, they will look to qualify for the Euro 2020 tournament.

Patrik Schick played an inspirational role in the Czech Republic’s campaign in the inaugural UEFA Nations League. Having lost their footing against Ukraine, the Czechs needed to defeat the Slovaks in order to avoid relegation. During these crucial fixtures, Schick scored two goals in as many games against the Slovaks. Both of his efforts proved to be the winning goals in each match, and the national team will have him to thank for maintaining their place in League B. 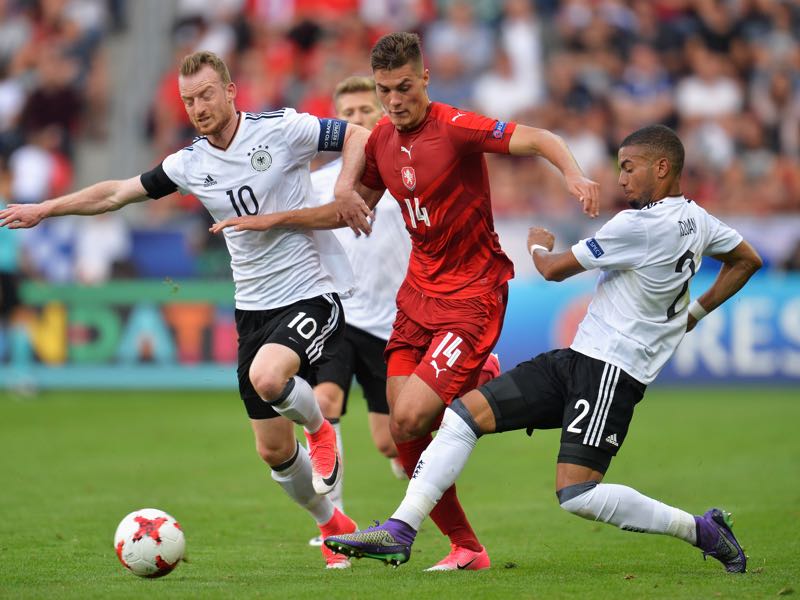 Patrik Schick of Czech Republic attempts to get past Maximilian Arnold of Germany and Jeremy Toljan of Germany during the UEFA European Under-21 Championship Group C match between Germany and Czech Republic. Schick was one of the breakout players in the UEFA Nations League B. (Photo by Adam Nurkiewicz/Getty Images)

Originally projected to win the group and gain promotion, the Slovaks underperformed in the group. Of the three sides in League B, Group 1, the Slovaks havd the strongest national team on paper. Moreover, the Slovak national team is rather diverse, with most of their squad competing in Europe’s top divisions. With the likes of S.S.C. Napoli’s Marek Hamšík, Zenit St. Petersburg’s Róbert Mak, Olympique Marseille’s Tomáš Hobčan and Newcastle United’s Martin Dúbravka, it seemed as if the Slovaks would secure promotion to the competition’s League A.

Alas, this did not occur. A series of defensive frailties saw the Slovaks concede in all four of their group stage matches. Their offensive talents were held at bay by their opposition, thus limiting their scoring ability. The Slovaks were unable to score in two of their four matches, and ultimately, this proved to be the cause of their downfall in League B, Group 1.

The Slovaks will now be relegated to the competition’s League C. Over the next few years, this could potentially hinder the growth of the Slovak national team as they will no longer be competing against some of toughest opponents in Europe.

Albert Rusnák provided depth in Slovakia’s midfield. Over the course of four UEFA Nations League fixtures and two international friendlies, Rusnák scored three goals in six matches. One of his goals came against Ukraine in what proved to be a rout. Slovakia’s convincing victory breathed life into a depleted Slovak side. His efforts would not grow to fruition, however, as Slovakia were relegated by the Czech Republic on Matchday 4 in League B, Group 1. Rusnák will now have to help his side fight for a place in the upcoming Euro 2020 qualifiers. 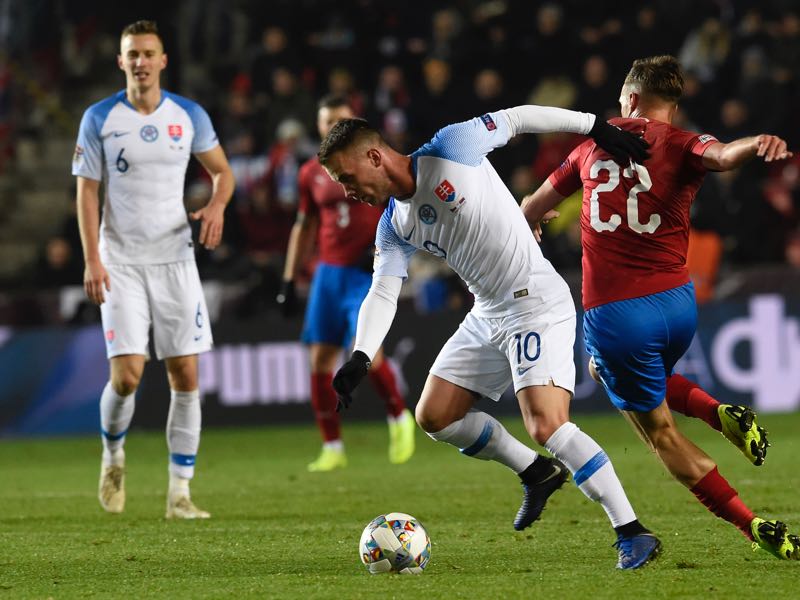 Ukraine exceeded their expectations in the inaugural UEFA Nations League. Traditionally known to underperform in dire circumstances, there were mixed feelings on how the Zbirna would fare in this competition.

Following their poor performance at the European Championships in 2016 and their failure to qualify for the 2018 FIFA World Cup, Ukrainian manager Andriy Shevchenko revamped his squad. The national team saw the departure of veterans Anatoliy Tymoshchuk, Ruslan Rotan and Yevhen Seleznyov and saw the introduction of Oleksandr Zinchenko, Ruslan Malinovskiy and Artem Besyedin. Moreover, a youthful defensive line provided additional coverage for veteran goalkeeper Andriy Pyatov.

During the competition, the Ukrainians secured three victories from three matches. They were one of the first teams in the competition to gain promotion to a higher division. While the Zbirna may have ended 2018 on a sour note, the national team should be praised for their remarkable achievement. Their promotion means they could be pared with the likes of Spain, France or England in the 2020/21 UEFA Nations League. This will surely help with the development of Ukrainian players.

Following the retirement of veteran Ruslan Rotan, Shevchenko sought a vital replacement in his side’s defensive midfield. Ruslan Malinovskiy stood up to the challenge. Having started all of Ukraine’s matches in League B, Group 1, the young defensive midfielder played an important role in helping his side earn two clean sheets in four UEFA Nations League fixtures. Moreover, he scored Ukraine’s winning goal against the Czech Republic in what proved to be their ticket to securing promotion to the competition’s League A. Having won their group, Ukraine are also guaranteed a second round qualification spot for Euro 2020 (although they still may directly qualify for the competition via the normal qualification procedures).

Ukraine – Promoted to League A

Czech Republic – Retain their place in League B

The draw for the Euro 2020 qualification cycle will be held on December 2 in Dublin, Ireland. The competition’s qualification period will begin in March 2019.

The list of national teams and their respective seeds for the upcoming draw can be found here.