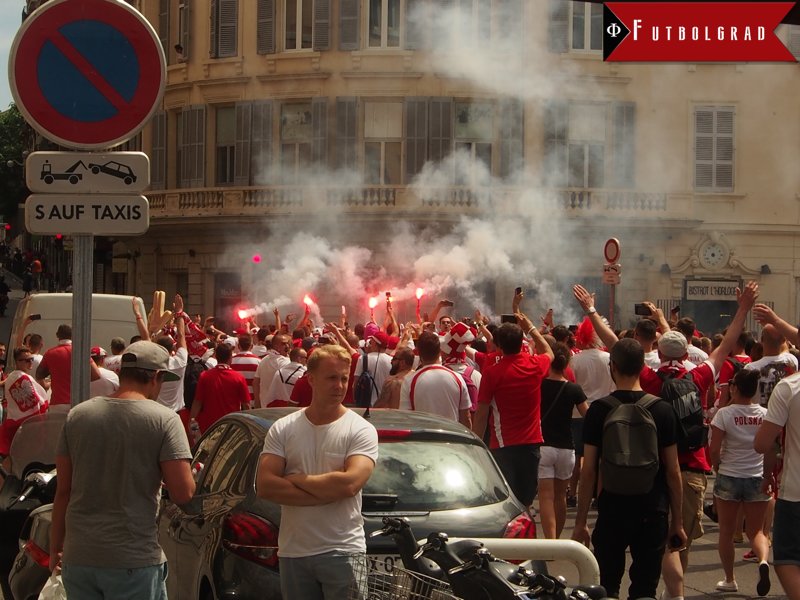 Ukraine vs Poland – A Once in a Lifetime Experience

Ever since I was a child I have always wanted to see the Ukrainian national team play live. After all, it is one thing to watch a match on television while it is another to see it live. Experiencing the excitement of the fans and the atmosphere of a match would be something remarkable.

Finally, after almost two decades of waiting, I was able to “check off my bucket list item.” On Tuesday, 21st June 2016 I attended Ukraine’s final Euro 2016 Group Stage match against Poland. In December 2015 I had predicted that Ukraine would finish second in the group, and would thus move on to the knockout stages. Yet Ukraine, in an unforeseeable fashion, had other plans in mind, as prior to this match the Ukrainian national team had already cemented its position in the group: against all expectations the Ukrainian national team finished in fourth (or in last) place in Group C following consecutive defeats against Germany and Northern Ireland.

The circumstances could not have been more embarrassing. In addition, prior to Ukraine’s final match in the Euro 2016 competition, Ukrainian Manager Mykhaylo Fomenko also announced that his tenure as the national team’s head coach would end following Ukraine’s spell in the competition.

Nonetheless, despite these setbacks, I would not let this ruin the buildup to the match. In my mind this would still be an exciting and wonderful experience to say that I was able to fulfill one of my childhood dreams, and despite Ukraine’s poor performances in its previous two matches, I would not let these outcomes affect my opinion and excitement towards this match.

Ukraine vs Poland – The Atmosphere on Match Day was Remarkable

The atmosphere on match day was simply remarkable. The busy streets of France’s port city saw a plethora of blue and yellow and red and white colors throughout the city. Unlike previous events that had unfolded in Marseille during the tournament, the streets were calm. Ukrainian and Polish fans embraced one another prior to the match, wishing one another good luck. Moreover, feeling that today’s outcome was more or less meaningless for many Ukrainian fans, some individuals stressed that they wanted to see their Polish “brothers” finish above Germany in their respective Euro Group. As the match grew closer, more and more fans started to gather, and a wave of Poles led the charge throughout the streets towards the Stade Vélodrome, where the sea of red and white belted out “Polska bialo czerwoni!” (Poland, white and red!) 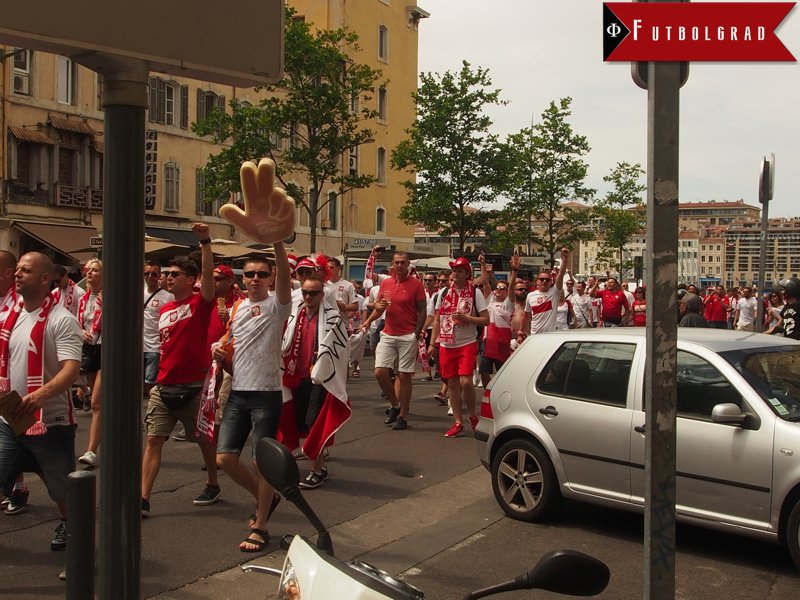 Polish fans leading the charge towards the stadium

Meanwhile, as the streets filled with supporters, French residents looked on as the football fans passed by. And while an overwhelming majority of those present at the match were Polish supporters, the Ukrainians had their fair share of supporters as well. Ukrainian supporters too belted out their own chants, such as “Slava Ukraini! Heroyem Slava!” (Glory to Ukraine! Glory to Heroes!) 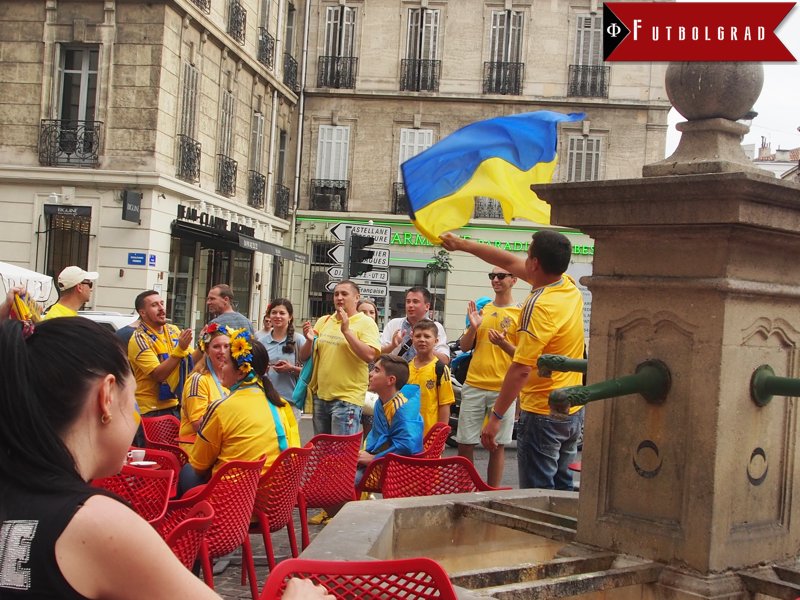 Ukrainian fans gather at a bar prior to the match

After passing through the necessary levels of security, several of my friends and I entered the stadium and we took our respective seats. We were very fortunate to have secured tickets rather close to the pitch, and thus this made the experience even more memorable.

Deadlock in the First Half

The match then began with its regular proceedings, starting with a brief pre-match show. Following the conclusion of this brief ceremony, the starting XI from each nation entered the pitch and took their respective places. The flags were then displayed and the national anthems were sung. Once the formalities ended, the match began. 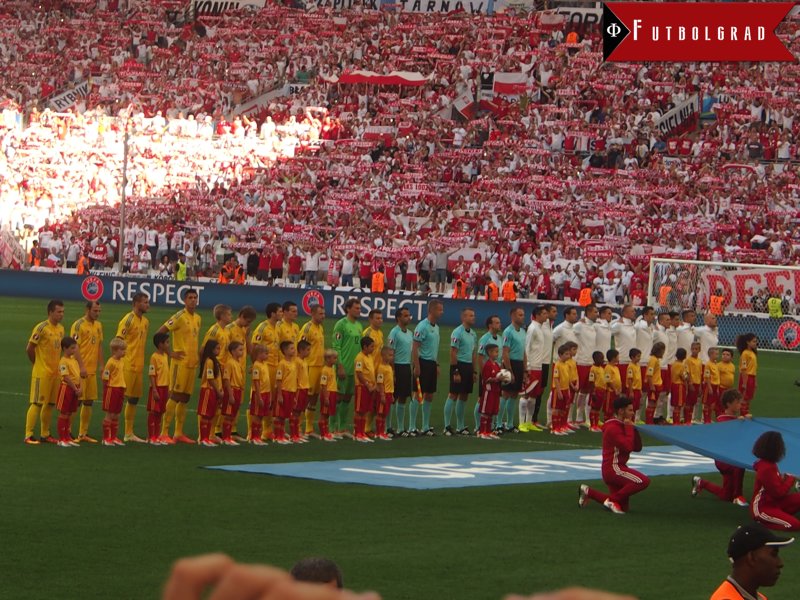 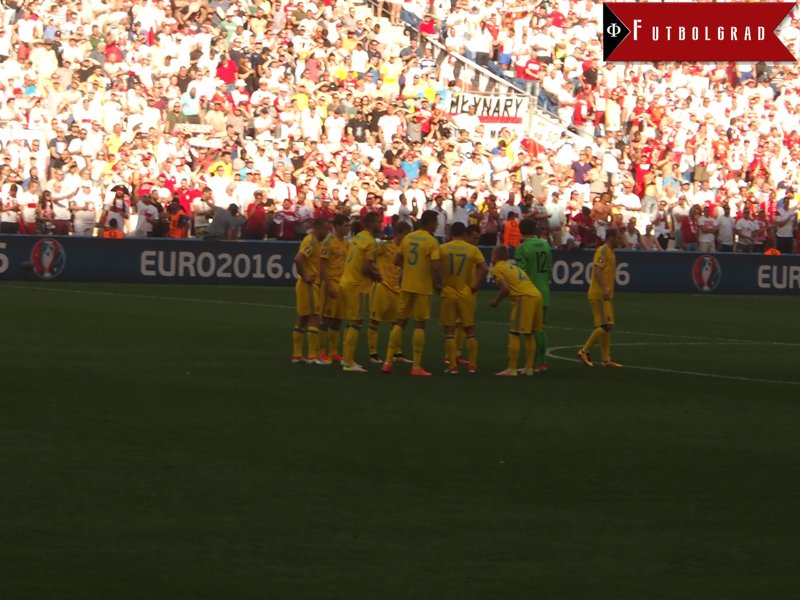 Ukraine and Poland were very deadlocked during the first half, though from where I was seated it seemed that Ukraine had the better chances, with Andriy Yarmolenko most notably going close during the 17th minute. Andriy Pyatov, however, was also busy during the first half, keeping out efforts by Poland’s Arkadiusz Milik and Robert Lewandowski.

The First Half Ended Goalless

Nonetheless, the first half ended goalless, though the Polish fans drained out the chants and songs of the Ukrainian supporters. Though I did not have any official statistics on the 67,000+ fans that were present at the match, it seemed as it 75% of the stadium supported Poland while a low 25% supported Ukraine. (Though not officially, this could be in part because Polish citizens have visa free travel to France while Ukrainians needed visas to attend the matches, many of which were not granted in time, or at all, prior to the Euros). 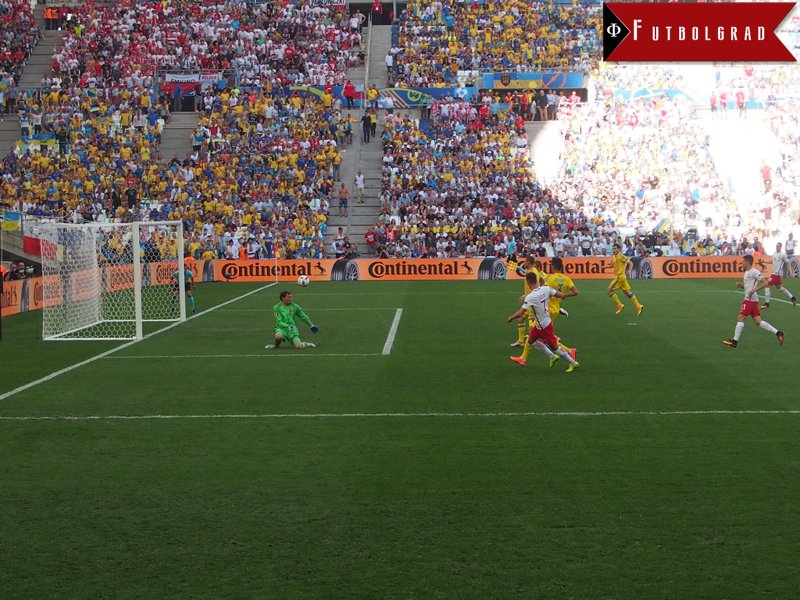 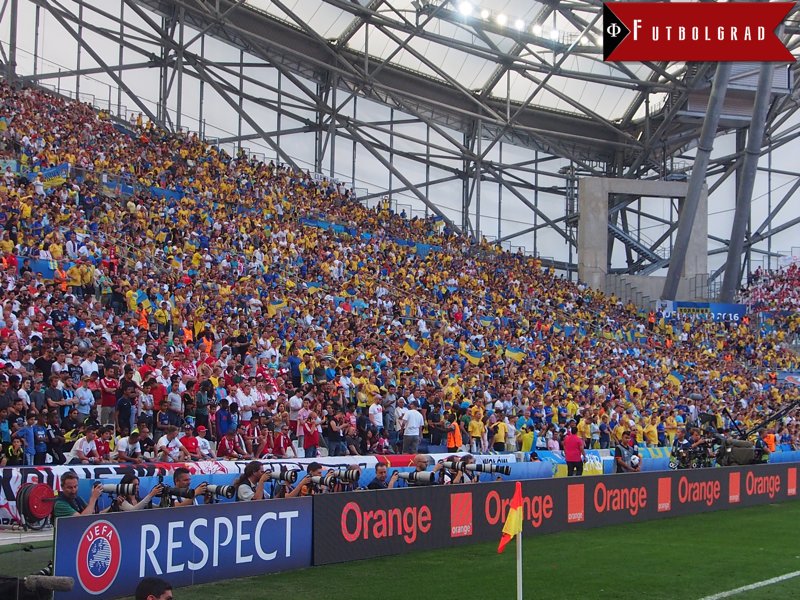 The start of the second half, however, it appeared as if Ukraine was ready to conceded defeat. After all, prior to this match the Ukrainian National Team had yet to score a goal, lost its two prior games, and had a -4 goal differential.

Ukraine Had Only Pride Left to Play For

At this point anything from the Poland match was for pride, yet the Poles were determined to gather all three points to ensure qualification for the next round in the Euros. And their determination showed when Polish substitute Jakub Błaszczykowski scored in the 54th minute. Following this moment nearly the entire stadium erupted in a loud cheer. 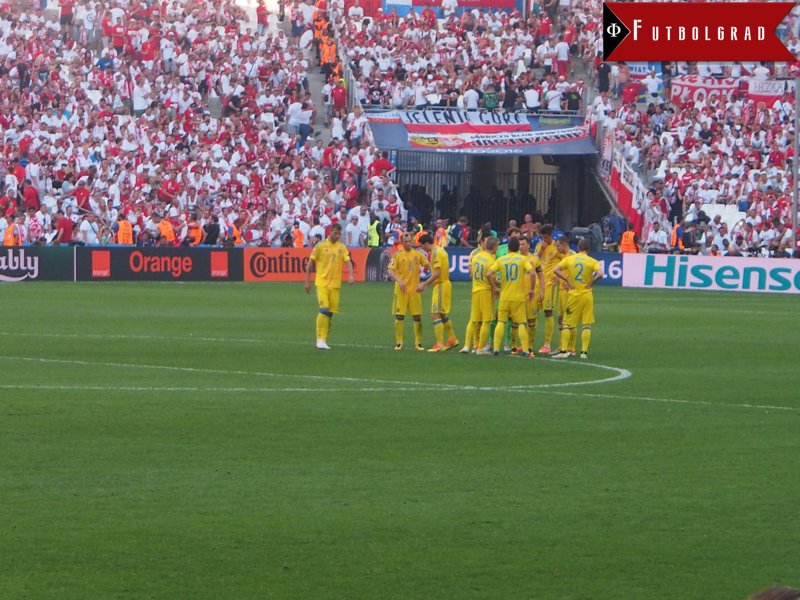 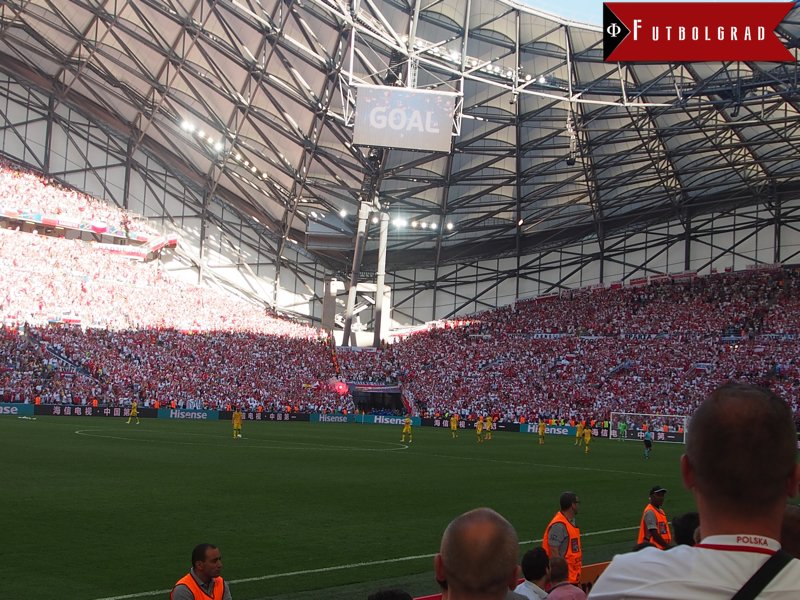 While Ukraine tried to net an equalizer, it seemed as if the match had gone and the Ukrainian players were ready to return home. This sentiment was further supported when Ukrainian manager Fomenko substituted Anatoliy Tymoshchuk for Roman Zozulya, in what has reportedly been Tymoshchuk’s final match as he will retire from the national team once the Euros have concluded. While there were some half chances towards the end of the match, the game ended 0-1 in Poland’s favor. Ukraine was finally out of the competition, and the Ukrainian players could return home to focus on the upcoming club season. 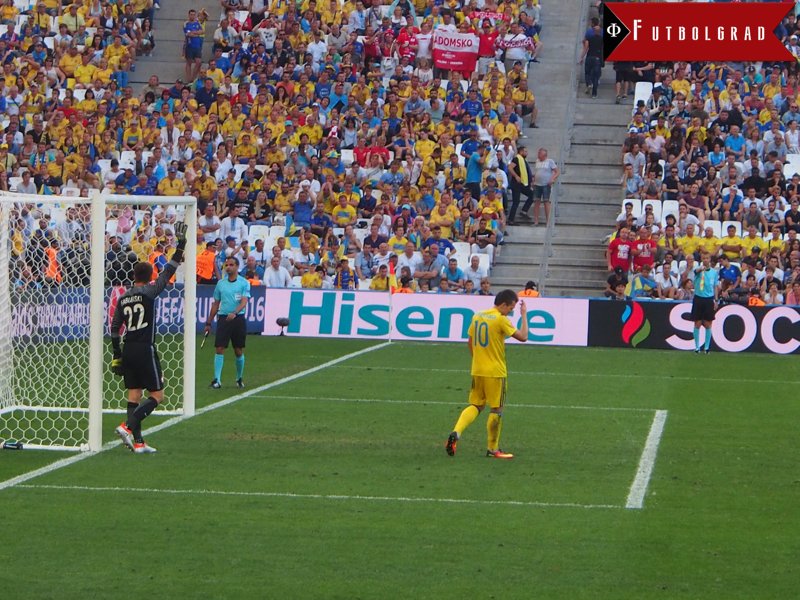 Frustration: Konoplyanka’s Frustration says it all for the Ukrainian National Team

Overall, though it was disappointing that the match was not played on better terms, that Ukraine did not score a single goal in the tournament, and that they lost this match, the experience was simply unreal. Following the match the Ukrainian national team greeted their fans, apologized for their poor performance in the competition, and distributed their kits to some lucky supporters. 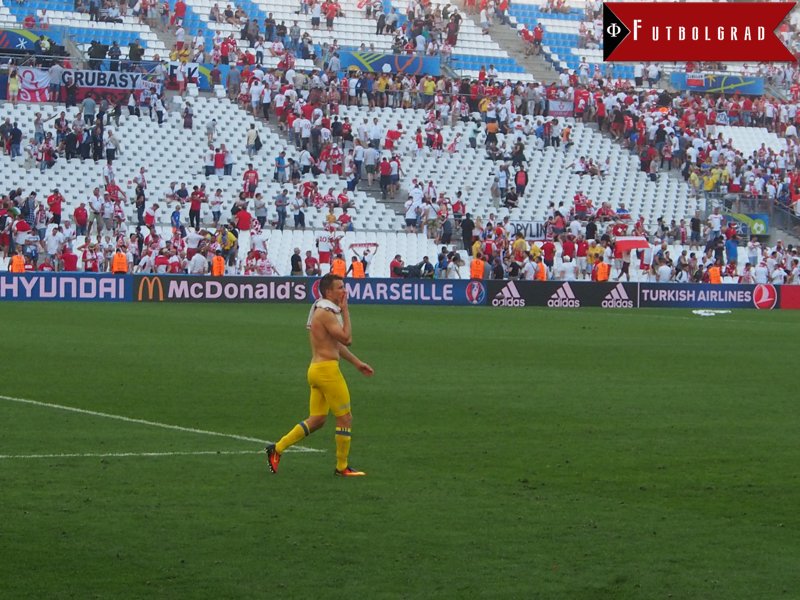 I am very grateful to have attended this match, and hope that I will have future opportunities to see the Ukrainian national team play live in future competitions. Au revoir Marseille! 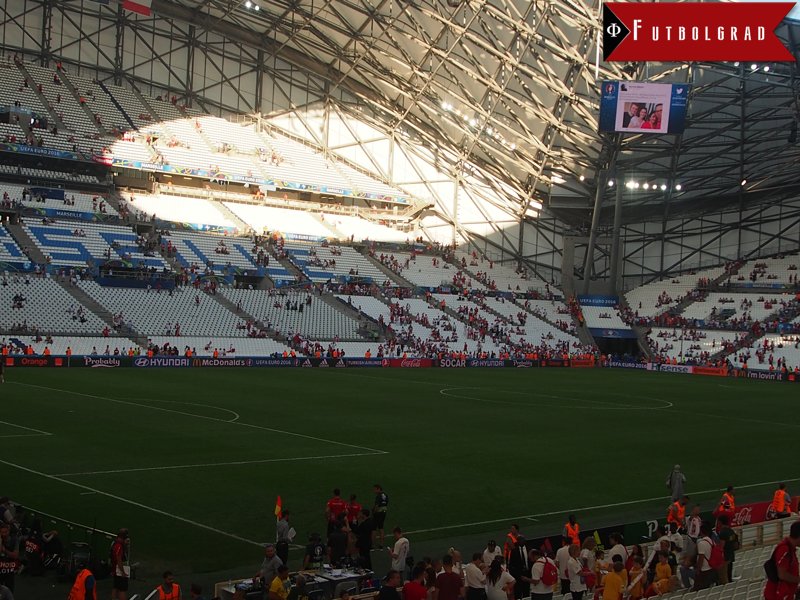