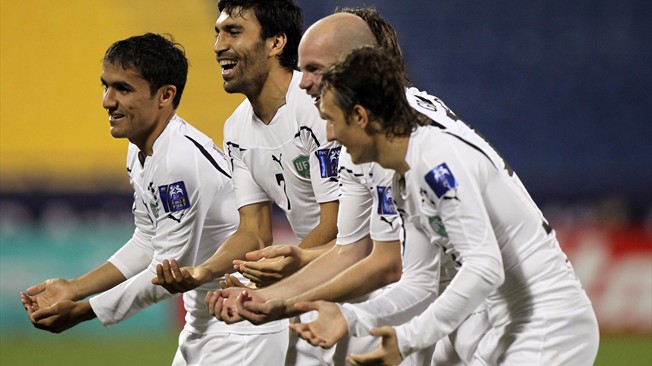 With three games remaining, in a group that would make many American political scientists more than a little nervous, Uzbekistan have crept above (in descending order of positions) South Korea, Iran, Qatar, and Lebanon , into first place, after an unexpected 1-0 victory in Tehran last November.

As the top two sides qualify automatically for Brazil, and with two of Uzbekistan’s final three matches to be played in Tashkent (Uzbekistan’s expansive capital) against Qatar and Lebanon, the notion of Uzbekistan becoming Asia’s latest footballing force is as real as it is unfathomable to most outsiders.

‘Uzbek Football Tastes Success’ declared Central Asia Online to the motley band of Central Asia observers. Uzbek columnist, Valery Samarsky, proclaimed, “It can be stated with conviction that the Uzbekistan Football Federation [UFF] is today the most prestigious of all the Central Asian federations.” Admittedly, a cautiously unambitious crown. Samarsky robustly defends Uzbekistan’s current position, and points to Uzbekistan’s footballing culture: “This is no accident. After all, Uzbek football has long-standing traditions. The centenary of the first appearance of the game on our soil was in 2012. It began to spread in Kokand and Fergana in 1912 – that was where the first teams appeared. And only 16 years later, in 1928, the [Uzbek Soviet Socialist Republic] formed the first ‘national’ team.” Rumours of Baddiel and Skinner penning Uzbekistan’s World Cup anthem are as yet unconfirmed.

The Three Stars  of Uzbek Football

Whether Uzbekistan will successfully progress to Brazil depends on the performances of those unpronounceable, soon-to-be-household, names, bound to be cherished by the forever-young Panini sticker collectors.

Pride of place, and destined to be the subject of classroom jokes, is Server Djeparov (the Uzbek Maradona!), whose physical appearance (hair) is a cross between Pierre Littbarski and the drummer from the Scorpions. Winds of change asides, Djeparov was offered a trial at Chelsea in 2010 – which he rebuffed due to international commitments (allegedly). 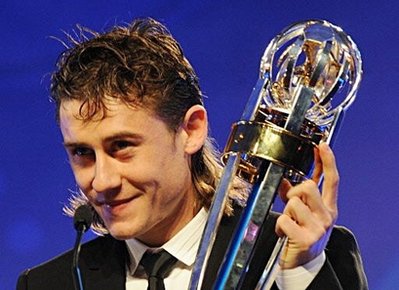 UAE-based Azizbek Haydarov, a retro defence-minded midfielder, is another likely starter for the White Wolves, who, according to Central Asia Online, is (rather cryptically), “[a]nother midfielder, who looks set for glory in the immediate future. The attacker is lacking consistency, but with this unknown country comes many unknown, but positive possibilities.” A complete unknown indeed!

A final one-to-unlikely-remember is Anzhi midfielder Odil Ahmedov. Once linked with Arsenal – around the same time as fellow Uzbek Alisher Usmanov increased his shareholding in the club Ahmedov is a player with genuine ability and, according to Wikipedia: “It is said that he ‘releases the Kracken’ almost like John Arne Riise and it may be true as he scored possibly goal of the tournament of the 2011 AFC Asian Cup.”

In keeping with Uzbekistan’s recent successes, the Uzbekistan Football Federation (UFF) was recently awarded with FIFA’s “Fair Play” award, and, according to Central Asia Online, the UFF achieved this by outmuscling the Guatemalan Football Association, and Turkish club Eskişehirspor, for the prize. In addition, the International Federation of Football History and Statistics (IFFHS) recently rated Uzbek Ravshan Irmatov – who officiated the semi-final between the Netherlands and Uruguay, in 2010 – as the best Asian referee of the last quarter-century (1987-2011).

However, is Uzbekistan’s progress sustainable, or will this talented crop dry up shortly like the Aral Sea? UFF President Mirabror Usmanov holds no such fears: “In recent years, we have put a lot of effort into Uzbek football and its development, and now we are seeing the results,” choked Usmanov proudly. “Our first and most important strategic decision was to develop football for youth and young adults and the sport’s infrastructure. Youth are the future of our football. We built stadiums, football academies and schools and reformed team training and the national championship. Now, we can clearly see that we are moving in the right direction.” 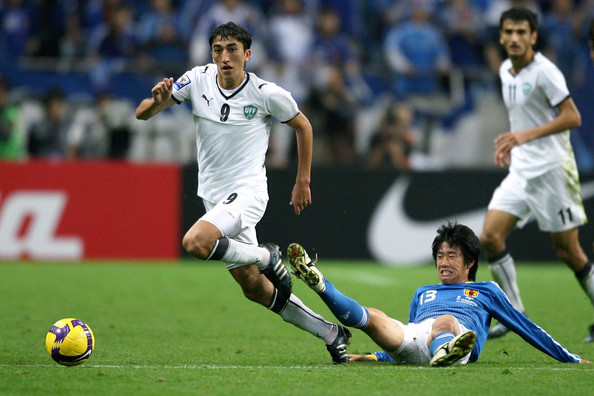 Could Odil Ahmedov be the first Uzbek to grace the EPL?

Shuaib Ahmed, in his article entitled ‘A New Asian Superpower’, concurs with Usmanov and notes that the future of the White Wolves’ young pack is also developing at the same impressive rate as their seniors. The U-16 team, having been runners up in the 2010 Asian Football Championship (AFC), lost to Uruguay in the quarter-finals of the 2011 FIFA U-17 World Cup in Mexico. Uzbekistan, however, won the 2012 AFC Championships held in Iran, beating all three regional heavyweights in succession; South Korea in the quarters, Iran in the semis and, finally, Japan.

The idea of a ‘Stan participating in the next World Cup concocts a trove of Silk Road romanticism – Uzbekistan would be only the third post-Soviet state to qualify for football’s elite international competition (following Russia and Ukraine). Qualification for Brazil would be a remarkable sporting lunge for Uzbekistan (having only gained independence in 1991) – allowing it to rebuild its image, currently consumed with shady authoritarianism and crass nepotism. More importantly, participation at the World Cup would showcase the region of Central Asia as a whole, which continues to suffer from a deficit of (most notably positive) global attention: even if only to expose the Panini sticker collectors to Uzbekistan’s location – landlocked between the four other post-Soviet Central Asian states; Kazakhstan, Kyrgyzstan, Tajikistan, and Turkmenistan, on the world map.