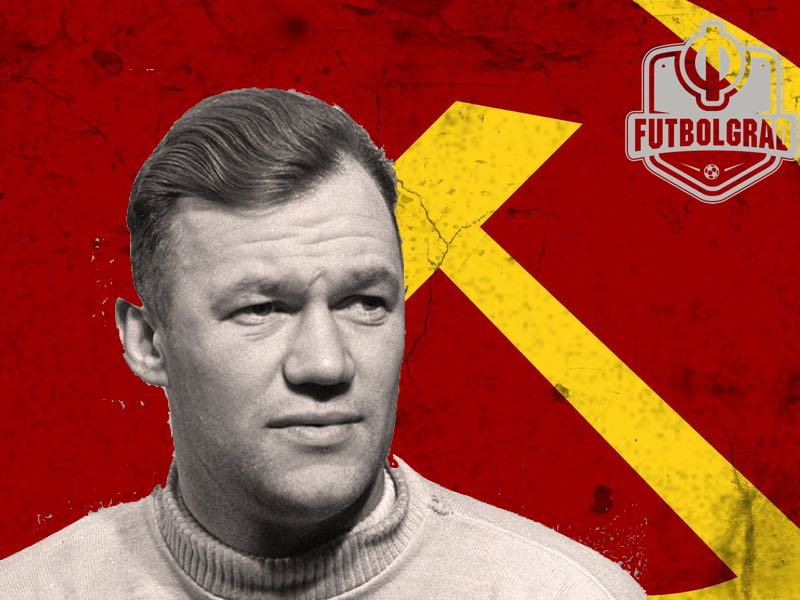 Vsevolod Bobrov – The Individual Within the Collective

I like a good challenge. Hence, when a Futbolgrad Podcast listener challenged me on Twitter to come up with a 1000-word comparison between Fedor Smolov and Vsevolod Bobrov I immediately jumped at the idea.

Vsevolod Bobrov you see is an integral part of Soviet sport having played like a football player for CDKA Moscow, VVD Moscow and Spartak Moscow. Spending most of his football career with the Red Army team CDKA Moscow—the predecessor of CSKA—he scored 82 goals in 79 games between 1945 and 1949. Perhaps this is the most significant link between Fedor Smolov and Vsevolod Bobrov, which is the remarkable ability to score bucket loads of goals.

In truth, the connection between the two on a first glance is limited to just that. Because unlike Smolov Bobrov would become a historical figure in Soviet sport not just for his achievement in football, but also in the country’s other most famous game: ice hockey.

Back in the 1940s and 1950s, it was quite common for players of either sport to play both. Furthermore, hockey in the Soviet Union as it exists today had a lot of overlap with bandy, which is played on ice as well, but outdoors on a field not unlike the dimensions of a football pitch. But hockey, as played in Canada, was a relatively new invention in the Soviet Union following World War II.

Vsevolod Bobrov participated in both the Summer and Winter Olympics

In retrospect, the 1952 Summer Olympics may have been the main reason for Bobrov to turn his back on football and focus on hockey ultimately. Scoring five goals in three matches, including a hattrick against Yugoslavia. The Soviet Union, however, lost that game and failed to win a medal. The backlash back in the USSR was massive. Yugoslavia’s communist leader Tito was Joseph Stalin’s biggest challenger in the post-World War II communist world, and a defeat to Yugoslavia was perceived as a major shame.

As a result, CDKA, which more or less had represented the Soviet Union at the tournament was disbanded. Bobrov, although he also played for VVS Moscow, the team run by Stalin’s son Vasili and a friend of Bobrov. Regardless, following the dissolution of the CDKA team, Vsevolod Bobrov quickly focused on hockey playing for CSKA Moscow, like CDKA a team associated with the Red Army.

As part of CDKA, he would later become part of the Red Machine hockey team that came out of nowhere dominate the sport worldwide. That Red Army hockey team is also important when viewing Soviet, and later Russian sport in a global perspective and why we to some extent can draw a rather loose comparison between Bobrov and Smolov.

Tarasov and Bobrov and the creation of the Soviet hockey program

When I lived in Kyiv back in 2013 a fantastic movie about the Soviet hockey legend Valeri Kharlamov, who is of Russian and Basque origin, had just been released to cinemas in both Ukraine and Russian. The film Legend No. 17 tracks the career of Kharlamov and his complicated relationship with CSKA head coach Anatoli Tarasov.

Tarasov was the father of the Soviet hockey program and built the Red Machine, which was to work as a collective with every part fitting into one another. Although Tarasov identifies Kharlamov as a technically gifted player, the playmaker is considered too headstrong to fit into the machine that Tarasov is attempting to create. As a result, he got sent down to the minors to play in Chebarkul in the Chelyabinsk Oblast for the local Zvezda team.

Playing outdoors in minus temperatures in small Siberian cities Kharlamov learns to work within a team, but at the same time does not forgo his apparent technical abilities. It is exactly what Tarasov had asked for from Kharlamov, who re-integrates the player back into his side. 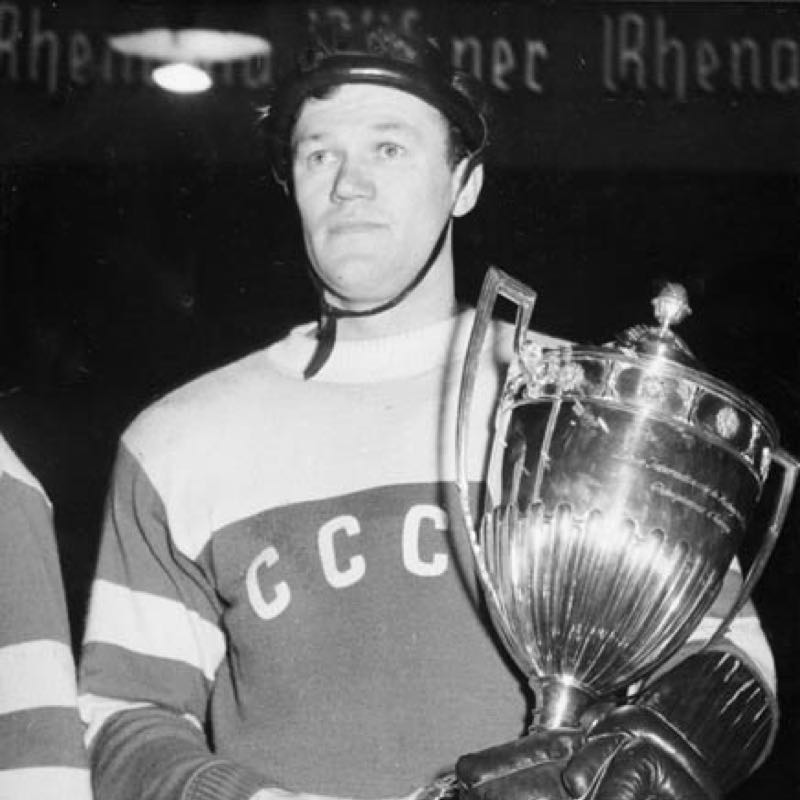 Vsevolod Bobrov with one of the countless trophies he won as part of the Soviet hockey program.

With Kharlamov the Red Machine becomes unstoppable and is sent by the Soviet Union to Canada to play against professionals of the National Hockey League. Dubbed the Summit Series the tournament, becomes a matter of politics as two systems clash. Considered massive outsiders to the Canadian professionals, the Soviets shock Canada by winning the first game in Canada by a score of 7-3.

At this point, however, Tarasov had been replaced as a coach by no other than Bobrov. It was Bobrov, who guided the Soviet Union within one goal of winning the eight-game series. Canada had significantly benefited from the fact that Kharlamov had struggled with a knee injury sustained before the tournament in a car accident.

There was an ultimate lesson in the Summit Series and Bobrov’s approach to the game, which was later also adopted to Soviet football. The collective was undoubtedly the most important aspect of any team put together by the USSR. At the same time, however, coaches like Tarasov and Bobrov also furthered individual talent to make the collective succeed.

The collective can only succeed through individual brilliance

It is perhaps the biggest oxymoron of the collective thought that the masses can only succeed through the inspiration of an individual. But it is no incident that that pattern of thought originates from a coach like Bobrov, who although a hard-nosed coach was an individualistic player himself in both football and hockey.

It is, therefore, no incident that Soviet and later post-Soviet hockey and football seemed to have produced an almost endless number of playmakers and goalscorers that stood out in their rights. In hockey, those talented players include the likes of Igor Larionov, Vyacheslav Bykov, Valeri Kamensky, Alexander Mogilny, Pavel Bure and more recently Aleksandr Ovechkin as well as Ilya Kovalchuk.

The same is true in football. In the most recent Futbolgrad Podcast, we chatted about the sheer endless number of number 10s produced in the Soviet and post-Soviet game. The same could be said about goal scorers and playmakers.

Fedor Smolov is Russia’s number one striker and the latest player in a long line of individual stars to succeed in the post-Soviet space. (Photo by Epsilon/Getty Images)

With playmakers, in particular, there is some thought that the ability to produce an almost endless supply of number 10s by the countries of the post-Soviet space is down to the connection with chess. Indeed modern number 10s like Henrikh Mkhitaryan or before him Andrei Kanchelskis are understood to have some relationship with chess. Going further down the list that also includes the likes of Khoren Oganesian, Igor Dobrolovski, Aleksandr Mostovoi and Oleksandr Zavarov the connection between chess and playmakers is perhaps not that clear.

What is, however, clear is that despite the collective thought that went into team games the individual was never forgotten. Even clubs like Dynamo Kyiv under head coach Valeri Lobanovskyi produced individuals like Andrei Shevchenko, who could dazzle the crowd in their likes.

That perhaps also goes back to Bobrov, who after all returned to football as a manager in the 1960s coaching Chornomorets Odessa in 1963, just two years before Lobanovskyi would play there himself, and then CSKA Moscow from 1967 to 1969 and once again from 1977 to 1978. Giving room to the individual is therefore perhaps one of the fundamentals of the Soviet and post-Soviet game, which in turn also explains individual stars like Fedor Smolov, who could now become the latest post-Soviet export to ply his trade in Western Europe.