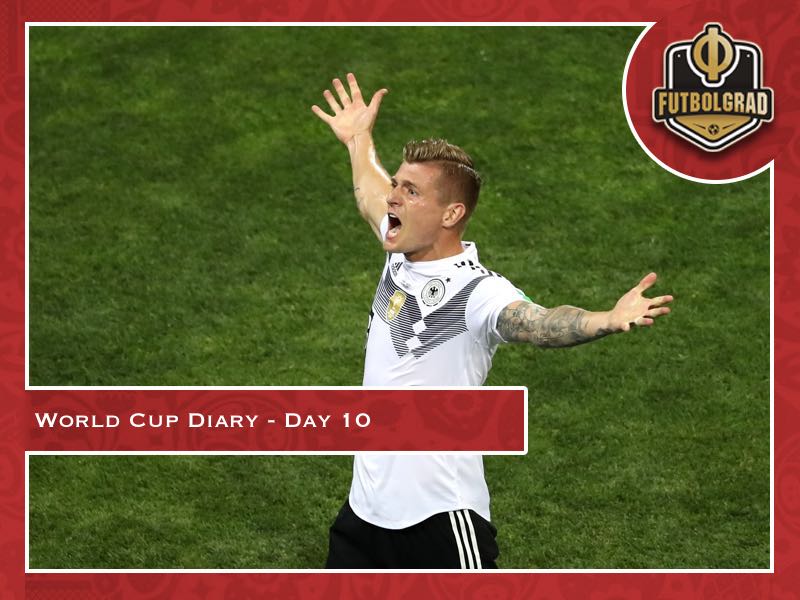 Day 10 of the World Cup is in the books, which in turn means that a third of the tournament is now over. With many games to be played, however, there are still plenty of stories to be written. But one of the biggest stories of the tournament could have been the early exit of world champions Germany. Germany faltered but did not fall thanks to a 95th miracle goal by Toni Kroos. But despite late goal heroics the question remains are Germany resurrected?

Let us get one thing straight right away. Germany dominated this match. The German’s led every single category from shots on goal (16 to eight), passes attempted (699 to 214), passes completed (91% to 78%) and ball possession (74% to 26%). But Sweden took the lead and even after Marco Reus equalised held Germany to a draw.

Germany, in turn, tried to break down Sweden with their usual passing game. Toni Kroos, who made a key error ahead of Sweden’s opening goal, had 144 touches – the most by any player in a World Cup game since the 1966 World Cup – and dominated the midfield by will. But what was lacking was that final touch, that final moment of inspiration that would allow Germany the breakthrough.

To make matters worse, Germany remained vulnerable at the back. Always in danger of being caught in the transition game matters were made even worse when Jérôme Boateng was sent off for a silly challenge at the right flank of the field. A man down it was left to Marco Reus and Kroos to come up with something special when they were awarded a free-kick at an impossible angle of the left side of the penalty box.

“Marco [Reus] told me ‘let me shoot this one direct’ but I thought that was not a good idea,” Kroos told the media after the match. “Instead we came up with the plan that he would tap it and well Sweden were good in the air so a cross wasn’t really an option,” Kroos added with a smile on his face.

That is the big question. Die Mannschaft remain under pressure having to win their last group stage match against South Korea, ideally with plenty of goals as goal differential could be decisive. Ahead of the match, there were questions about the harmony in the squad.

Bundestrainer Joachim Löw leaving out Mesut Özil suggests that there is a rift in the squad and that the midfielder is struggling with the fallout created by the meeting with Recep Erdogan. The general consensus among the media has been that Löw wanted to protect the sensible Arsenal midfielder.

The squad also seems unhappy with how the media have dealt with the team. “We feel that back home a lot of people would be happy if we go out early,” Marco Reus told the media at the post-game press conference. “It isn’t the fans really but all those former players, and specialists, that have been brutal. Also, we feel that the media rather want to write negatively about us than positively”, Kroos added.

A rift not just inside the team but now also with the fans and journalists? “This isn’t about the fans, they support us we know that,” Kroos was quick to add. Squad harmony, at odds with the media and perhaps the atmosphere in Russia questions remain. South Korea will answer the question whether this team is truly resurrected, for now, however, there is a sense that Kroos’ last-minute goal could go a long way in repairing the damage. Perhaps one day the media will write “imagine that last minute free-kick against Sweden had not gone in.”

Germany vs Sweden was not the only match full of drama. In Moscow’s Spartak-Stadium, Belgium and Tunisia battled each other to a 5-2 result. It was an incredible game with seven goals.

Ultimately, this is a big statement game by Belgium, who look to cement their place among the World Cup favourites. Never truly threatened they were spectacular and there is now very little doubt that the Red Devils will be thereabouts when it comes to winning the World Cup title on July 15 in Moscow.

Meanwhile, in Rostov Mexico made a big step towards the round of 16. Dominating South Korea Los Angeles FC forward Carlos Vela was, in particularly impressive. The LAFC striker scored the opening goal by converting a penalty and caused countless problems to South Korea’s backline. Chicharito would later add a second but the one downside was the late goal by Son Heung-min, which could hurt Mexico on the final matchday as goal difference could be decisive if El Tri loses to Sweden.

Finally, we need to talk about Sochi. The location targeted by Joachim Löw to be the key in Die Mannschaft‘s resurrection. Located on the Black Sea, the resort town has been lavishly expanded to host the 2014 Sochi Winter Olympics.

The Russian government sunk $50 billion into the project and the result is somewhat impressive. Mixing Soviet kitsch with post-Soviet bling-bling the resort, located only five kilometres of the border of Abkhazia/Georgia, combines the new and old Russia like no other place.

With sunshine and tropical temperatures, the scenery is stunning. At the same time, there is an odd sense of being removed and living in a plastic world that does not quite fit this gigantic country. But perhaps that is why Löw believes that this is the ideal place for Germany’s resurrection and by all accounts, the plan seems to have worked for now.

On a personal level, being in Sochi has been great. Covering this tournament has been a none-stop experience and getting a moment to breathe and lie on a beach has been a wonderful experience.

Well, that is it for today. Until tomorrow, privet from Sochi.