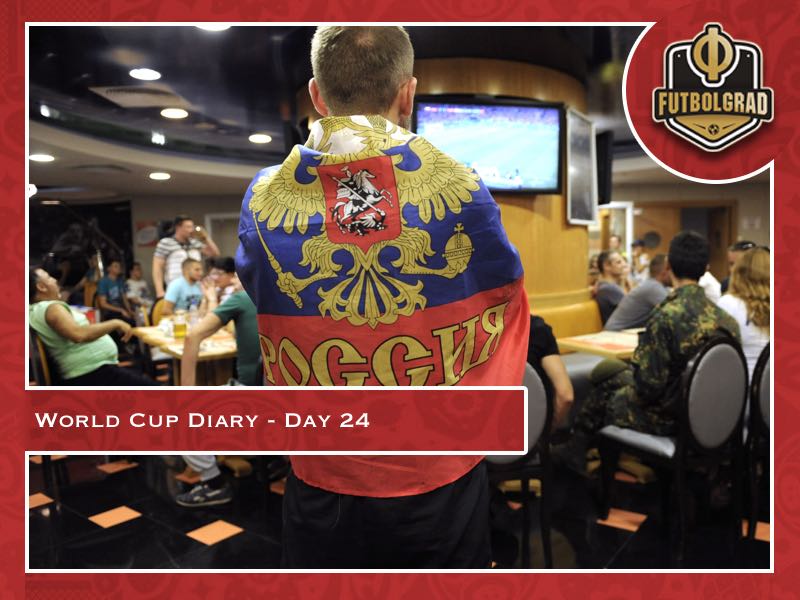 World Cup Diary – Day 24: The Sbornaya are out

In the end, there was applause. The Russian national team fought Croatia to a standstill over 120 minutes but had to bow out after a dramatic penalty shootout. But while the Sbornaya are out the tournament carries on with four remaining teams that will now fight for the world’s most prestigious football trophy.

Before starting with the Sbornaya and their match against Croatia, let us quickly recap England’s 2-0 victory over Sweden. “It is coming home”, has certainly been one of the loudest whispered slogans at this tournament and England fans have a right to believe.

After all, they defeated a well organised Sweden side that up until this point seemed unbreakable. Sweden’s tactics was that of bending and not breaking. Absorbing the pressure and to then hit teams on the counter-attack.

That tactic, many believed, would suit the Blågult well against an England side that struggled to complete passes against Colombia. But England manager Gareth Southgate did well to re-organise his side and England were much more balanced in midfield.

At the same time, England against Sweden was not a classic. Instead, it had the flavour of West Bromwich against Wigan circa 2002. Neither team offered much spark and creativity, and in the end, it was set pieces that made the difference for England.

Can England go all the way? It is certainly possible. This tournament has been dominated by sides displaying team spirit rather than individual brilliance. Furthermore, England have been favoured by a very easy draw that is somewhat reminiscent when Germany reached the final in 2002 – die Nationalmannschaft eliminated Paraguay, the United States and South Korea before finally falling to Brazil at the World Cup in South Korea and Japan.

Croatia a step too far?

For England, the first real test in the knockout stage will be Croatia. The Vatreni have mostly flown under the radar when it comes to World Cup favourites but with one of the best sides of the tournament are bringing an entirely different challenge to this young English side then Colombia and Sweden have.

Croatia had the thankless task to face a determined Denmark side and then play the host nation Russia. Both games went the full distance with Croatia beating both teams on penalties. That in itself could favour England as Croatia’s head coach Zlatko Dalić admitted at the post-game conference last night that “many players are carrying small knocks”.

“We must now refresh the side and see who is fit enough to play against England”, Dalić told the media after the Russia game. But if any team can pick themselves up and fight on it will be Croatia. The Balkan country combines strength and physical elements with technical and tactical attributes like no other team at this tournament.

Croatia would be the smallest European country ever to win the World Cup another aspect that would be fascinating. But until then it is still a long way.

The Sbornaya bow out but earn respect

Russia’s dream of winning the World Cup, in the meantime, is over. The Sbornaya capped off another impressive performance against a World Cup favourite with a fantastic strike by Denis Cheryshev and overtime heroics by Mario Fernandes to take Croatia all the way to penalties.

There Fedor Smolov, whose awful Panenka was saved by Danijel Subašić, and Mario Fernandes became the tragic heroes as they missed their penalties allowing Croatia to advance. After the final penalty, many of the 44,000 spectators at the Fisht Stadium in Sochi got to their feet to applaud the Sbornaya, who despite their obvious limitations managed to exceed expectations to reach the final eight of the tournament. 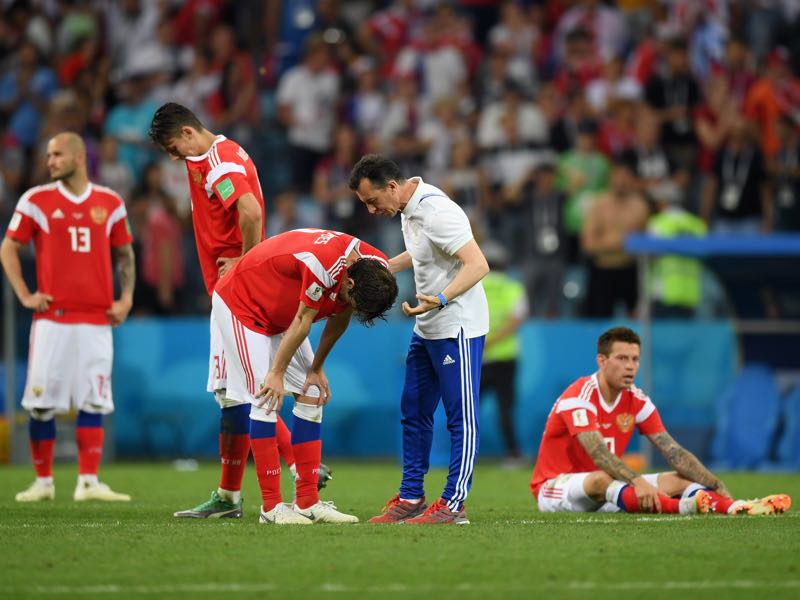 That applause was then repeated at the press conference after Stanislav Cherchesov had concluded his tournament analysis and when the players walked through the press zone.

For Russia, the big question will be what to take away from this tournament. The infrastructure and the organisational aspects were incredible. But will the tournament help to see Russia return to the world stage as a serious competitor? Those are questions for the future, and it will be fascinating to watch the post-World Cup fallout in this country as the spectacle moves on to Qatar.

Russian fans seemed to care very little after the game. Makeshift bars and restaurants along the Black Sea boulevard and the Olympic Pavilion around the stadium were full with young Russian football fans dancing and singing long into the night. For them, the tournament is over, but the party seems to continue.

Well, that is it from us until tomorrow. Do svidanye from Sochi.

Loading...
Newer Post
France and Belgium battle each other for a spot in the final
Older Post
Croatia shatters Russia’s dreams and move on to face England