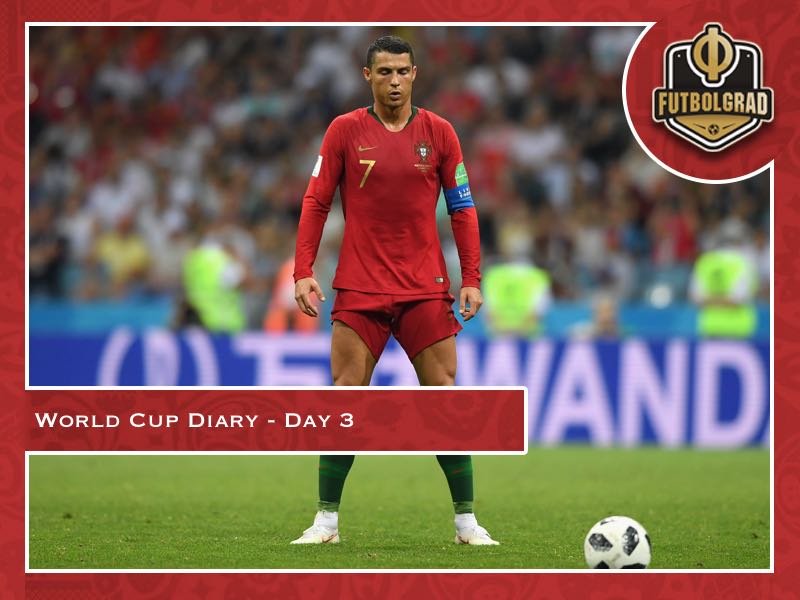 Day three of the 2018 FIFA World Cup is in the books, and we were once again treated to a fantastic day of football. Perhaps the biggest surprise, at first glance, was Iceland upsetting the apple cart once again by getting one point against Argentina. Here are my thoughts on what we saw on this third day of World Cup and what we can expect going forward.

Before we start with day three, we have to recapitulate day two where Portugal took on Spain quickly. And what a match it was! That was on everyone’s lips after they had witnessed the drama of 90 minutes between rivals Portugal and Spain. The game was made complete with Cristiano Ronaldo scoring an unbelievable free kick in the 88th minute to make it 3-3.

It was the conclusion to a game that saw three amazing goals and may have put an end to the Cristiano Ronaldo versus Lionel Messi debate. The Portuguese superstar delivered for his country on the biggest stage securing Portugal a point in the match against one of the toughest teams at this summer’s tournament.

With Spain, in the meantime, the biggest question was on how they would recover from having lost head coach Julen Lopetegui. Lopetegui was fired dramatically by the Spanish FA after he announced that he would succeed Zinedine Zidane at Real Madrid following the World Cup.

It was a dramatic development and Spain, always threatened by factionalism within the squad, could have fallen apart over this decision. Whether that will be the case at this tournament remains to be seen. Spain were good at times against Portugal but at the same time also showed significant structural problems against a side that by all accounts is not one of the best at this summer’s World Cup…

Argentina against Iceland provide drama on and off the pitch

It was the hottest ticket in town. Iceland have been on everyone’s mind heading into the World Cup. The tiny island nation are the smallest country to ever have competed at a World Cup. Hyped up by the media the same way as Ed Sheeran is overplayed in radio some may have already found the constant pictures of Iceland fans doing the huh and constant stories on how their model will safe US football annoying.

At the same time, it is hard not to be fascinated – especially as the Strákarnir okkar keep getting results. Facing Argentina Iceland ended the match with just 22.5% ball possession, which was the second-lowest by any nation in World Cup history. The outcome, however, was 1-1 giving the tiny island nation a real chance to advance from this group. 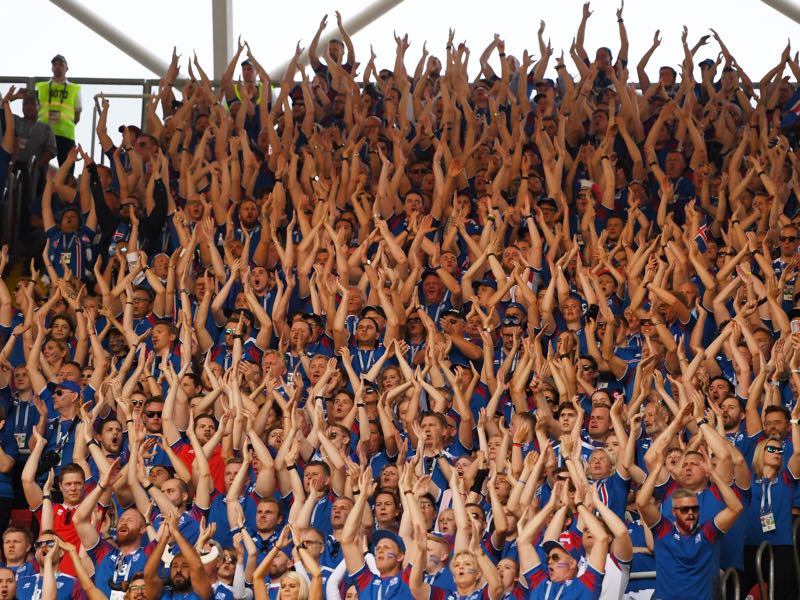 In the end, however, the result was perhaps not about Iceland getting the point but about Messi failing to live up to expectations when he plays for his country. The Barcelona forward had 11 shots and missed one penalty – hence, while Ronaldo got the job done for Portugal the day before Messi failed to do the same for his country showing perhaps that Ronaldo is the better of the two after all – not that that will end the debate at all…

Finally, off the pitch, there was also drama. High demand for tickets meant that even the press box was full with press from all over the world heading to the Spartak Stadium to witness another upset – they were not disappointed. This led to scenes of dramatic shouting and arguments in front of the press ticket box where many journalists were turned down leaving them to watch the match in the media centre.

The other three matches on day three did not provide the drama of the Iceland fixture nor any major surprises. France against Australia saw L’Equipe Tricolore collect all three points at the Kazan Arena – although in unconvincing fashion.

Over at the Mordovia Arena Denmark keeper, Kasper Schmeichel was the man of the match against Peru, which drew a smile on Peter Schmeichel’s face – the former Manchester United keeper and father of Kasper is in Russia to commentate on matches. The Leicester keeper made save after save to secure one point for Denmark.

Finally, Denmark got the job done against Nigeria. The Croats are my favourite underdog. Stacked on every position the Vatreni have the potential to go all the way this summer and with Iceland holding Argentina to a draw now took the lead in Group D.

Looking ahead to Germany against Mexico

On a personal note, my World Cup finally begins on Sunday with Germany taking on Mexico. High demand for Argentina vs Iceland game and other work commitments on opening day meant that this will be the first game in the press box.

Germany will enter this tournament trying to become the first nation since Brazil in 1958 and 1962 to defend the World Cup. On paper, Germany have perhaps the best squad heading into the tournament. But the World Cup is a marathon and not a race in which a single mistake can lead to elimination.

They will face a familiar foe on Sunday in Mexico – the two have met on three previous occasions at the World Cup and the 2017 FIFA Confederations Cup last summer. Thus far Germany are unbeaten against El Tri but the Mexicans will provide an interesting test for Germany, who will likely start without Mesut Özil, as they are tough and technically opponent with players like Hirving Lozano that could trouble Germany’s backline. We will cover that match, in particular, in great detail over on Fussballstadt.com on Sunday.

Well until then privet from Moscow!