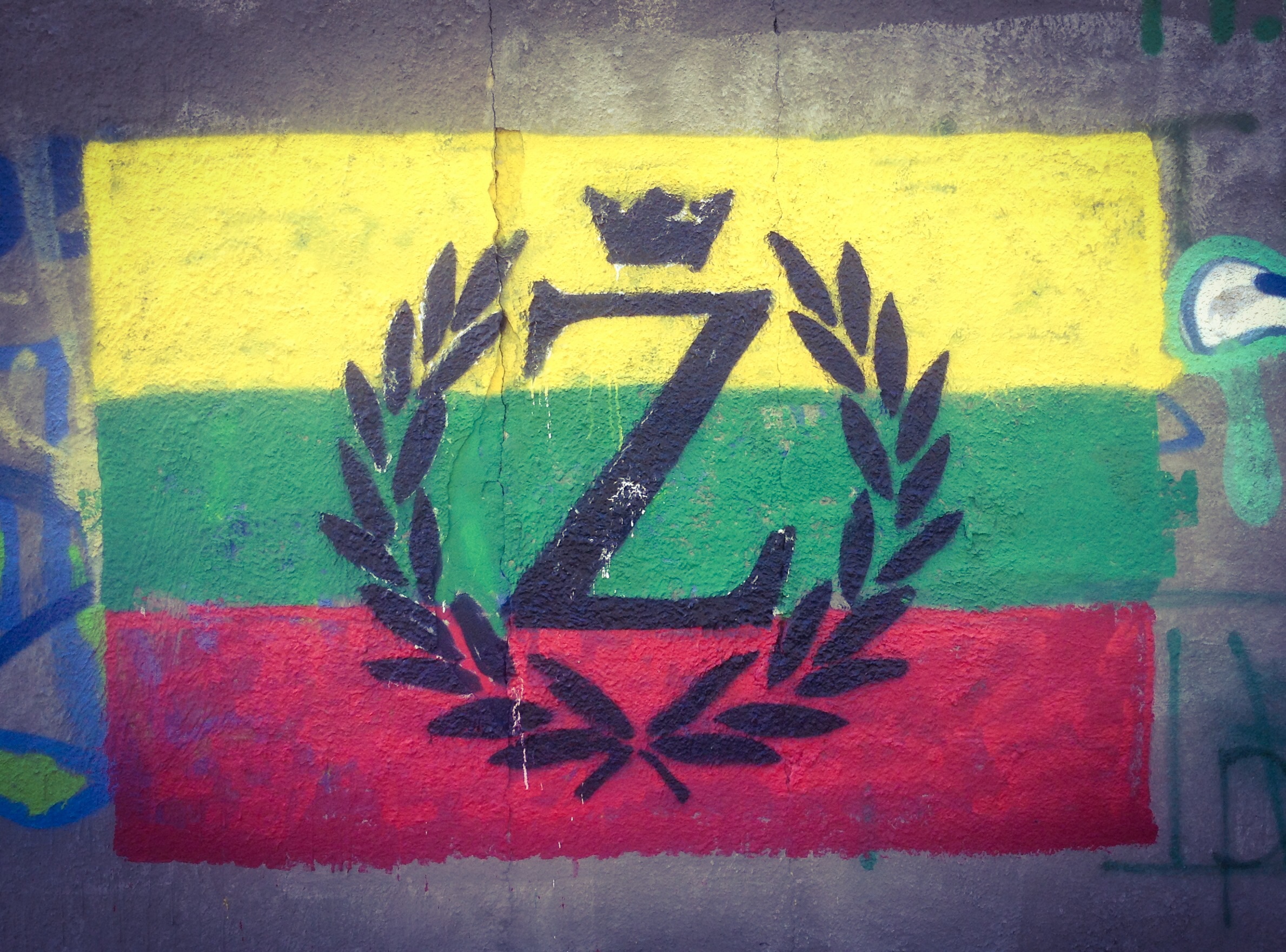 Once a mainstay in the Soviet Vysshaya Liga, Zalgiris Vilnius’ stadium is a monument for what was once considered one of the best leagues in Europe. History tells us that the Lithuanian Soviet Socialist Republic was little more than a minor player amidst the great industrial and ideological strength of the mighty Soviet state.  Yet, despite a small population, far less than the city of Moscow, there was one area of Soviet cultural life to which the Lithuanians greatly contributed – basketball, which was the most dominant sport in Lithuania.

Lithuanian didn’t make its mark on the Soviet Union’s national football team. For example Arminas Narbekovas, who was voted as the greatest Lithuanian player of the last 50 years, although he participated in the 1988 Olympics in Seoul, he failed to make a single appearance for the senior team of the USSR. Viačeslavas Sukristovas, however, a Lithuanian from Žalgiris, has played for the USSR, and was part of the USSR team that reached the final at the 1988 European Championship in Germany. Only after Lithuania declared independence from the Soviet Union on 11 March 1990 did Narbekovas play on the international stage as a member of the Lithuanian national team. 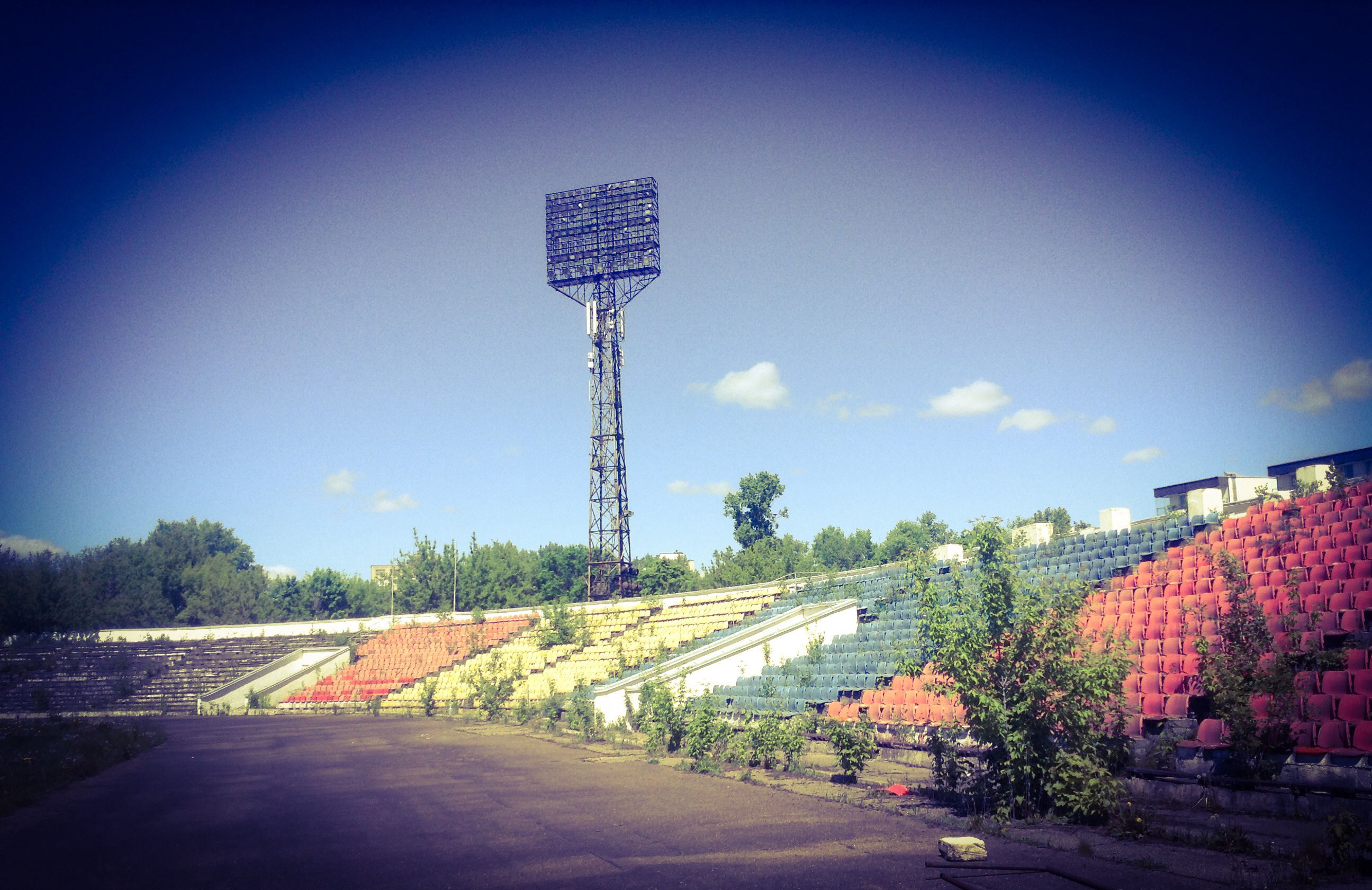 FK Zalgiris in the Shadow of Basketball

Today, basketball continues to be the dominant sport in the Baltic state.  Whether in schoolyards or sporting arenas it’s basketball that youngsters can be seen playing rather than football.   Basketball stadiums in modern day Lithuania tend to be large modern landmarks with huge sponsorship deals. 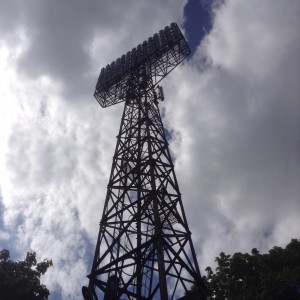 Typical Soviet style floodlights dominate the skyline of the stadium

The popularity of football, however, is a very different story. For every modern basketball venue there is a modest 3,000 capacity football stadium with little more than a single stand for fans.  The Zalgiris Vilnius stadium is an example of this. It is a weed strewn football arena, which sits in a state of utter disrepair and is no longer capable of holding a football match.

No greater indicator of the minor role of football in Lithuania can be found than at the LFF Stadium – the current footballing and administrative home of the game.   Lithuanian football has somehow condensed itself into a small sporting corner of Vilnius at the one time home of Vetra FC.   Here, just south of the railway station, the nation’s most famous club FK Zalgiris are located in the same stadium as the national team.

The top level of Soviet football was the Vysshaya Liga or Supreme League. Just as the FIFA cavalcade in 2018 will be spread across Russia, so the Russian league we know today is a geographically diverse set up, spread as far south as Dagestan and as far east as remote Vladivostok. 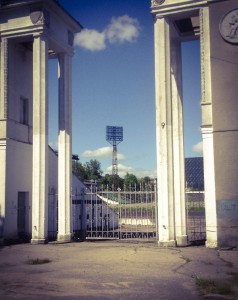 The entrance to the Zalgiris Stadium

Stadiums in the Soviet Union had a particular look and feel, unsurprising at a time when sport was simply another arm of the state.  Like many Soviet public buildings often a statue of Lenin would dominate the outer facade or in some cases, the surrounding sporting complex would be named after the leader himself.

These constructions were regarded as places of sporting excellence, showcasing athletic endeavor.   This was functional architecture at its best with an emphasis on impressive scale rather than any of the decorative style and amenities we expect today.

On occasions these creations would live up to the grandiose billing of the sporting and cultural football events taking place on the field. Yet at other times such stadiums appeared grim thanks to the freezing conditions overhead and the poor quality of fare on the field.  More tellingly, football supporters were often subject to Soviet climatic extremes making 90 minutes a story of survival for fans and players alike.

One such Soviet era stadium was the Zalgiris Stadium in Vilnius – home of FC Zalgiris Vilnius. Founded in 1947 the stadium is located in the Soviet urban planned district of Žirmūnai next to the rather more imposing Palace of Concerts and Sports (Koncertų ir sporto rūmai).

Between 1959 and 1989 Zalgiris Vilnius played over 300 football matches in the Soviet Vysshaya Liga. Almost all of its home matches were played at the Zalgiris Stadium.  In some ways this stadium is a smaller mirror image of the Dynamo Stadium in Kyiv, built in a park and surrounded by modest fencing. 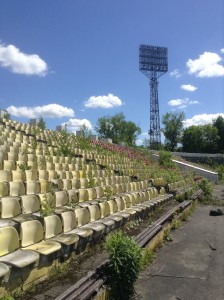 With its classical outer walls and open expansive interiors this was the venue for Zalgiris’ greatest ever season of 1987 when the team from Vilnius managed to break the Moscow monopoly to finish in a lofty third place behind Spartak and Dnipropetrovsk.

The top scorer for Zalgiris that season was Lithuania’s greatest ever player – Narbekovas, with 16 goals, only two behind the free scoring Oleg Protasov. Today the Zalgiris Stadium sits largely unchanged since the great season of 1987 but is now unused and overgrown with weeds. FK Zalgiris are long gone now, rehoused at the more humble LFF Stadium.

Despite being a key symbol of Lithuanian Soviet cultural history, the Zalgiris Stadium as of May 2015 is ready for demolition and urban redevelopment. The pavilion VIP area that looks out over the pitch is close to collapse. The adjoining main stands appear structurally unsafe. Meanwhile, the tunnel entry points with their graffiti scattered walls look out to overgrown grassy horizons.

Terraced seating areas, where fans used to chant in support of the Zalgiris, are mostly broken and filthy thanks to the ravages of the past Lithuanian winters.

Today Zalgiris is a modern club; however players still wear the same green and white striped shirts that were worn in the time of the Soviet Union. The very same colors can still be spotted in the old Zalgiris Stadium, which was once home to a club that carried the colors of Lithuania in the Soviet Vysshaia Liga. 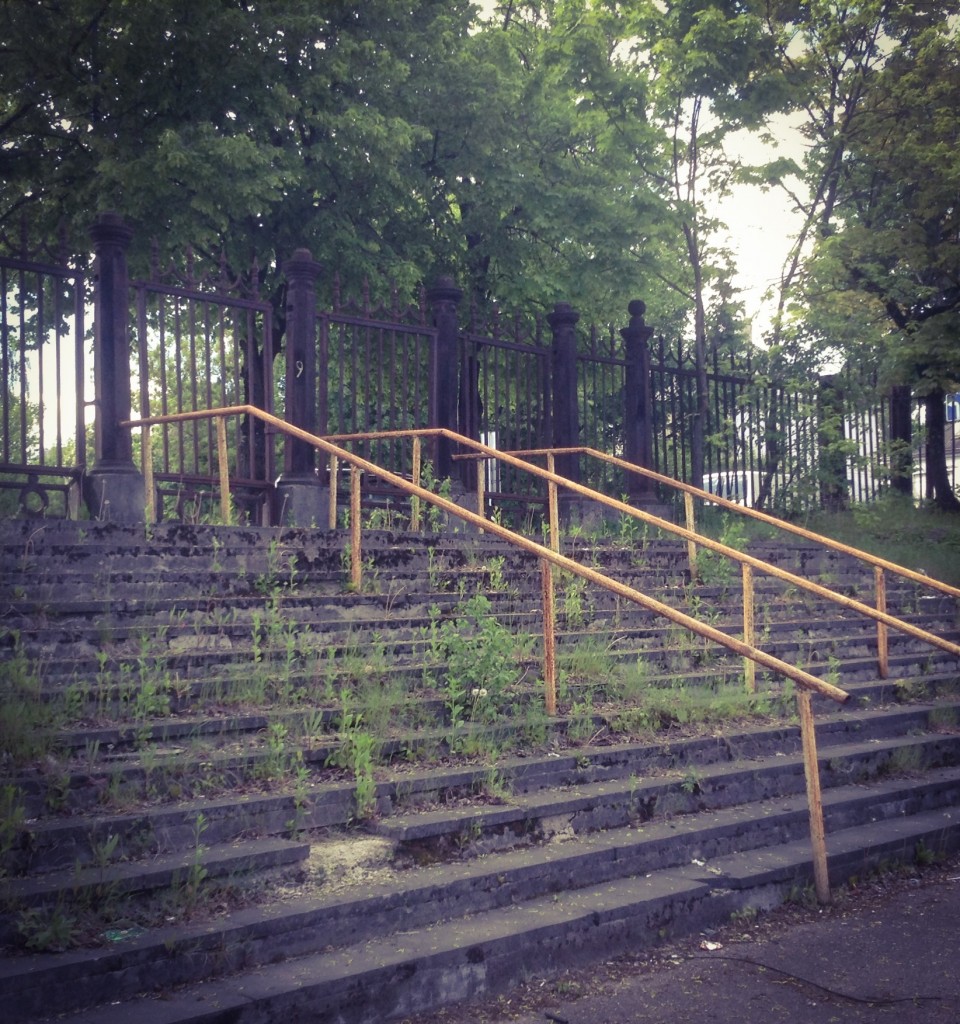 Grass is growing were once the masses entered the stadium