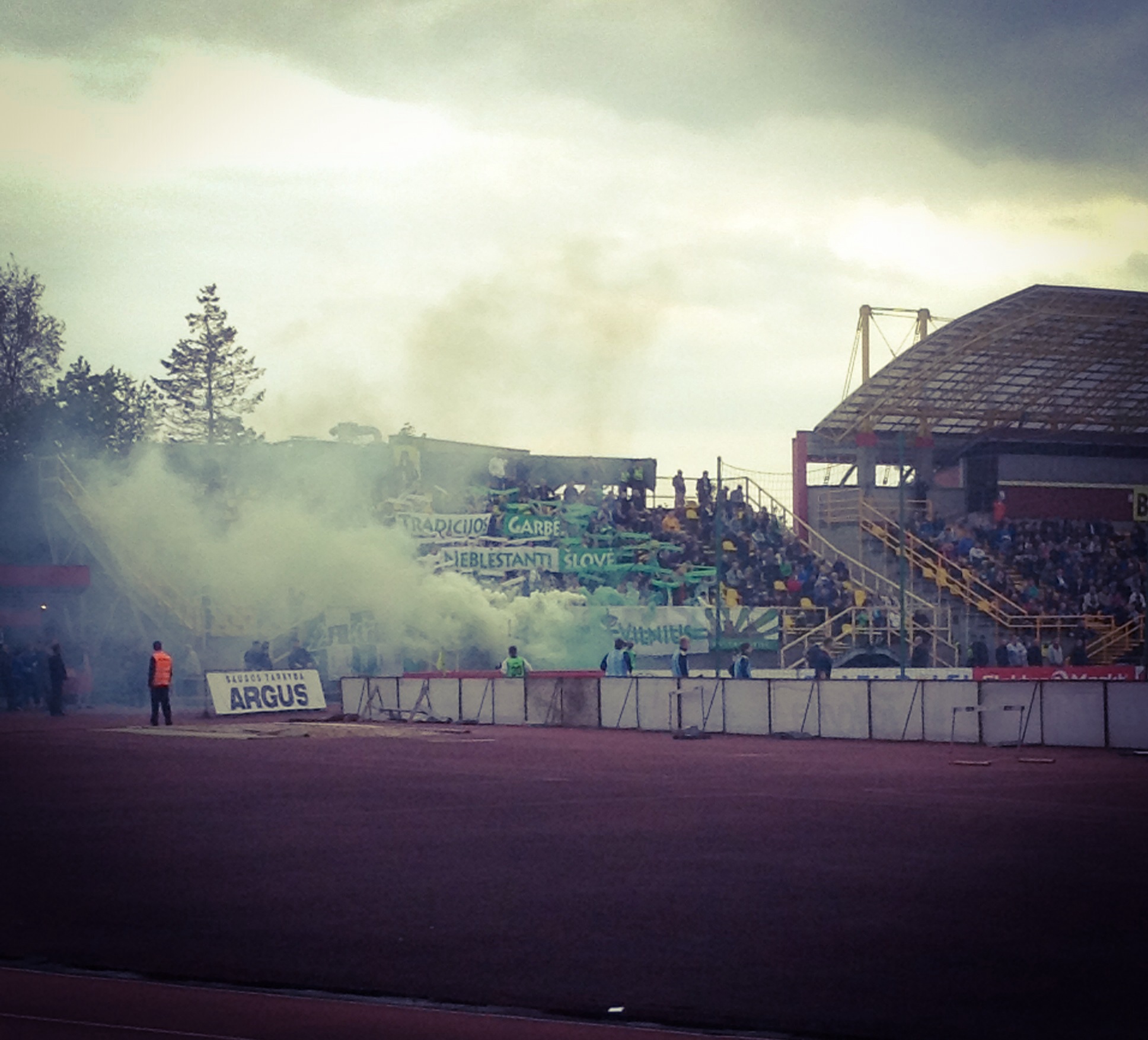 On May 23 our Futbolgrad.com contributing photographer Damon Main attended the 2014-15 Lithuanian Cup Final held in Šiauliai. Damon was able to capture some wonderful images, which can be found at the end of the text. 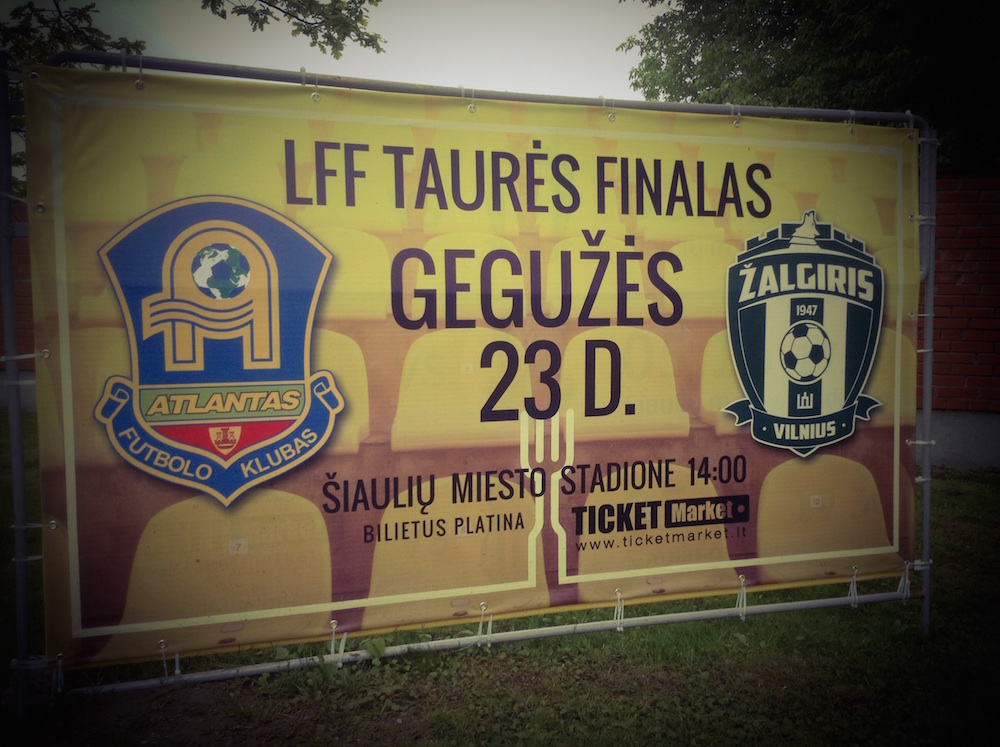 This year the Lithuanian Cup final was contested between Žalgiris Vilnius and Atlantas Klaipėda. The final was played in the 4000-seat Savivaldybė Stadium in Šiauliai. Located 210 kilometers north of Vilnius and 161 kilometers northeast of Klaipėda, the city was chosen as a neutral venue to hold the cup final between the clubs of Lithuania’s two biggest cities.

The LFF Cup (Lietuvos futbolo federacijos taurė) is a competition that began in 1990. Before then a smaller Soviet Tiesa Cup competition had been held for Lithuanian clubs that were not competing in the larger Soviet football system. Žalgiris managed to win that particular cup in 1966. 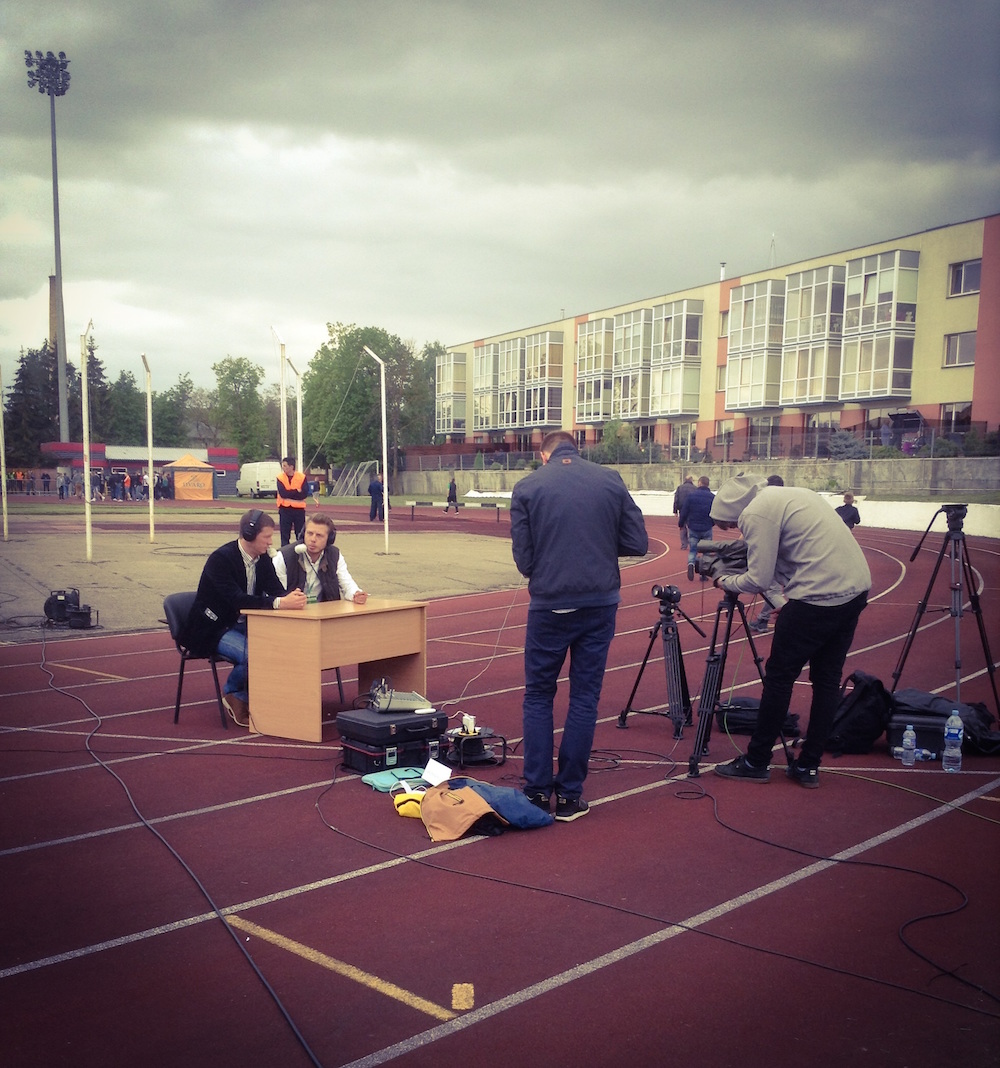 In comparison Atlantas Klaipėda is a much smaller club. Founded in 1962 as Granitas the club never left much of a mark on Soviet football, and mostly competed in the lower division of the Soviet league system. In 1993 Granitas was renamed PSK Aras, and in 1995 the name was once again changed – this time to Atlantas.

Football matches in Eastern Europe are often relatively cheap to attend, especially when comparing them to the rather inflated prices of the English Premier League. The LFF Cup Final was no different and tickets could be obtained for €3. 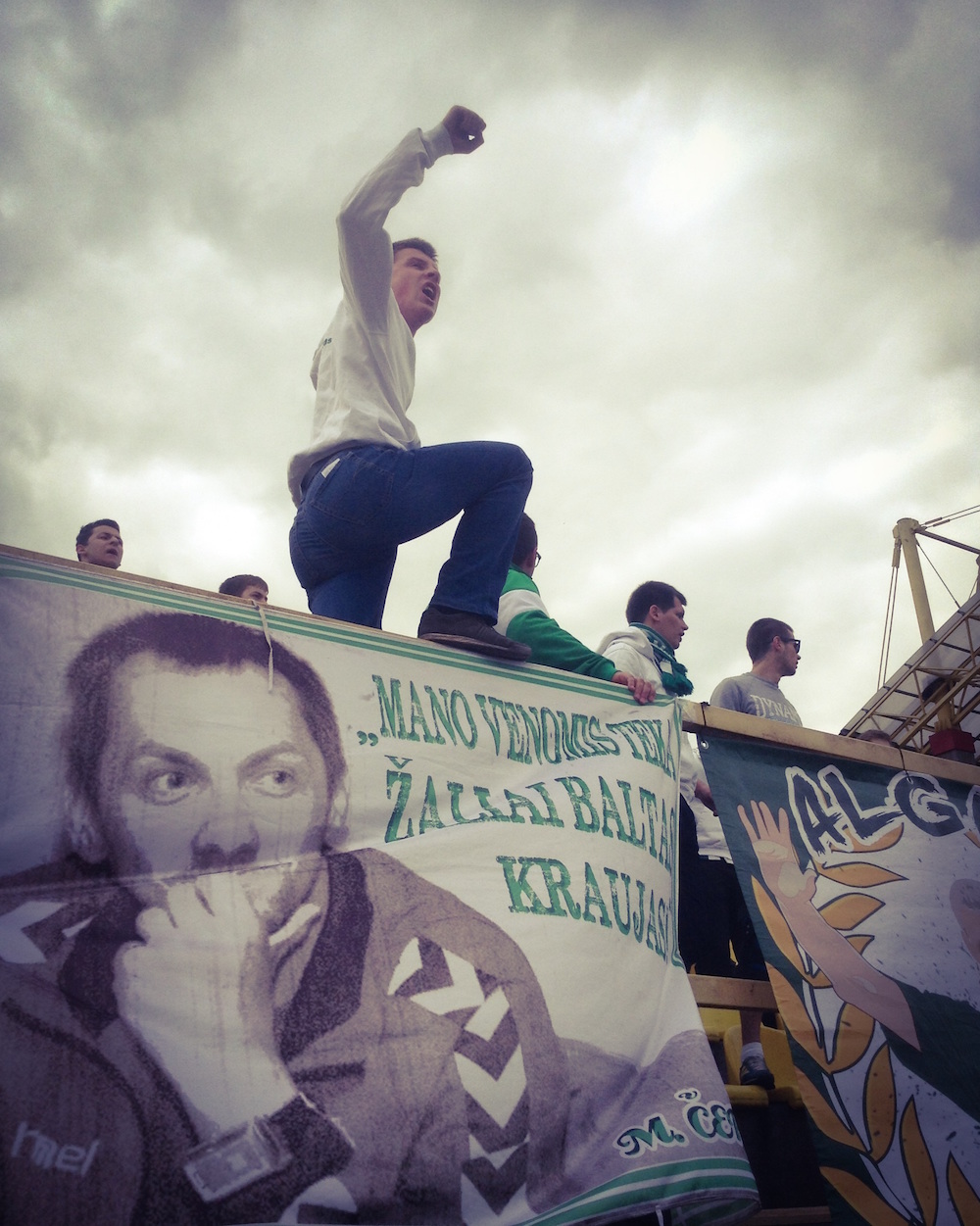 Our photographer Damon Main reached the city of Siauliai after a three-hour train journey from Vilnius. The local club FK Šiauliai usually uses the Savivaldybė Stadium, which hosted this year’s final. The stadium was built in 1962, and like many other stadiums constructed in that period of the Soviet Union was a multi-purpose stadium that was supposed to house a number of sports including track and field. The facility therefore includes a running track, which makes it not an ideal venue for watching football matches. 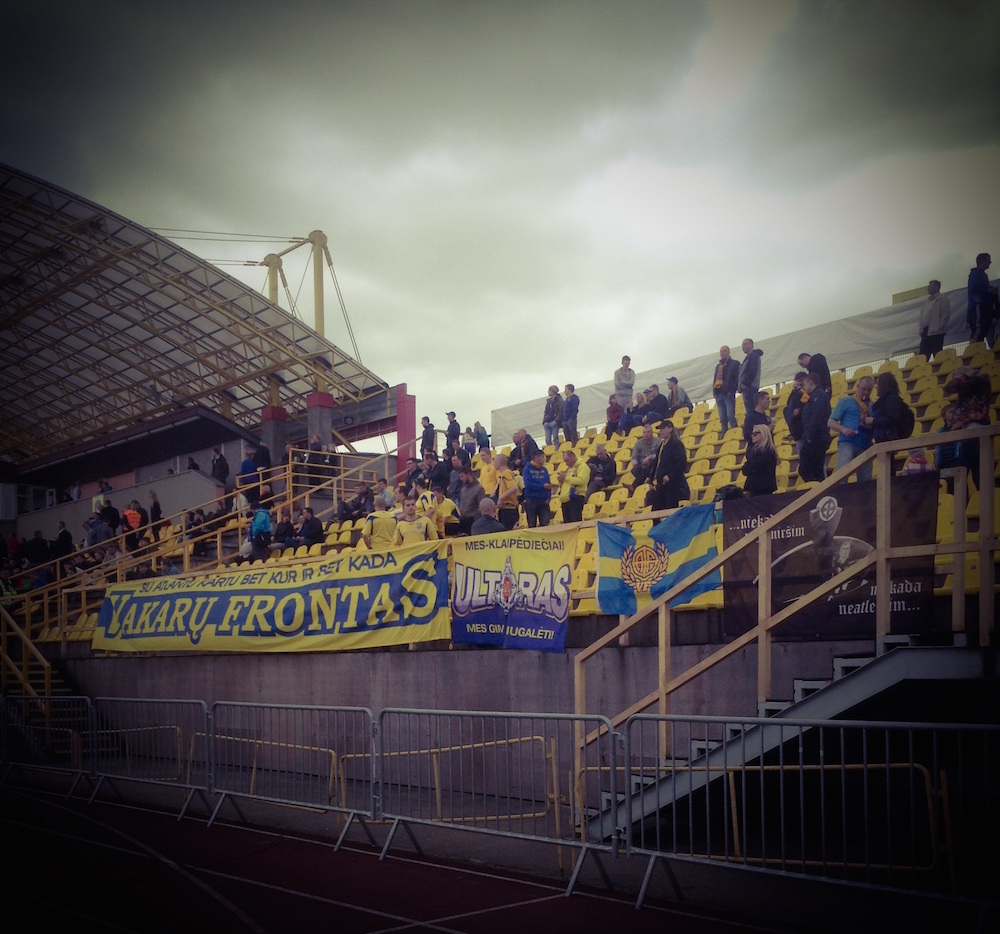 Around 250 Žalgiris fans had made the long train journey to support their club in this year’s final. They mostly occupied one side of the main stand. Opposing them at the other end of the stadium was a much smaller group of yellow and blue Atlantas fans. 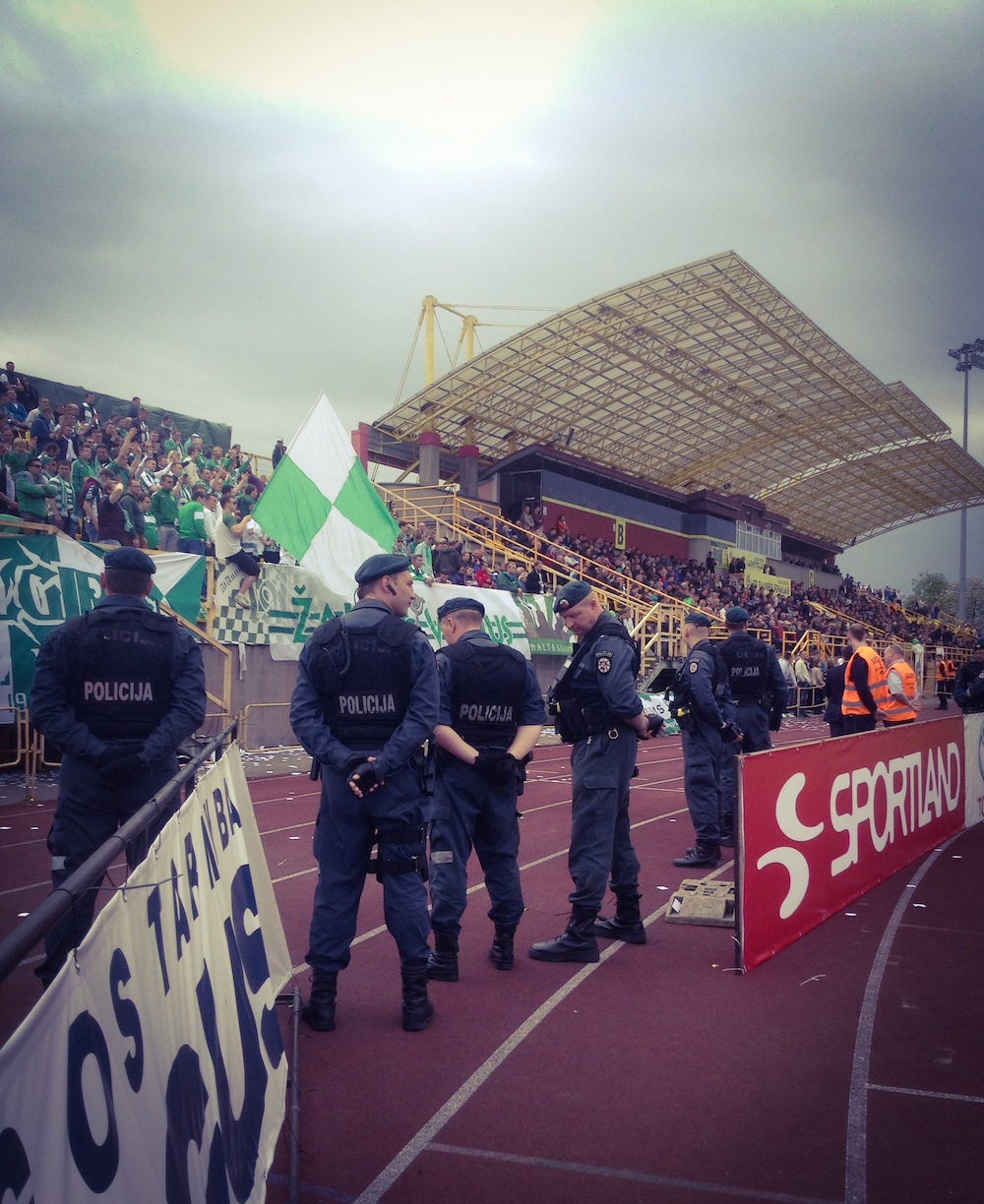 Zalgiris Fans and the ever present Policija

Football, unlike basketball, is not the most popular game in Lithuania, and the country therefore does not have the same fan travel culture as other countries in Europe. Most of the people who attended the game were locals and many were neutral towards the outcome of the match.

Also something that was noticeable right from the beginning was the complete lack of open hostility between both sets of fans. This absence of hostility, which can often be observed in many other football competitions in Eastern Europe, led to a colorful spectacle, in a completely sold out stadium.

Especially noticeable were the colors. The yellow and blue colors of Atlantas mixed with the green and white of Žalgiris to create a fantastic display of colors. The use of smoke bombs, streamers, flags and drumbeats brought a real sense of occasion to the game. 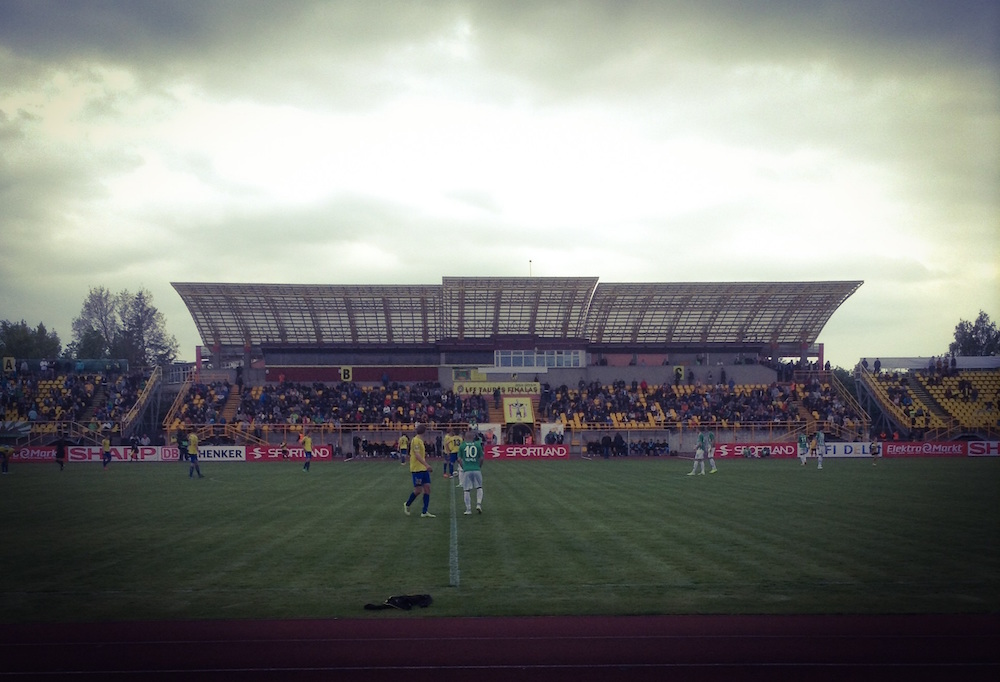 The main stand of the Savivaldybė Stadium

In the end Žalgiris Vilnius celebrated as they won the match 2-0, which gave the club its fourth consecutive win. Goals from Deividas Šemberas and Linas Pilibaitis helped secure the win. Šemberas especially had reason to celebrate, as this was his ninth national cup title – having won three in Lithuania and six in Russia with CSKA Moscow.

The title win completes the turnaround of a club that was threatened by extinction just five years ago. It was only in 2008 that Žalgiris lost its license to play in the Lithuanian A Lyga, and had to be re-founded by its fans in 2009. 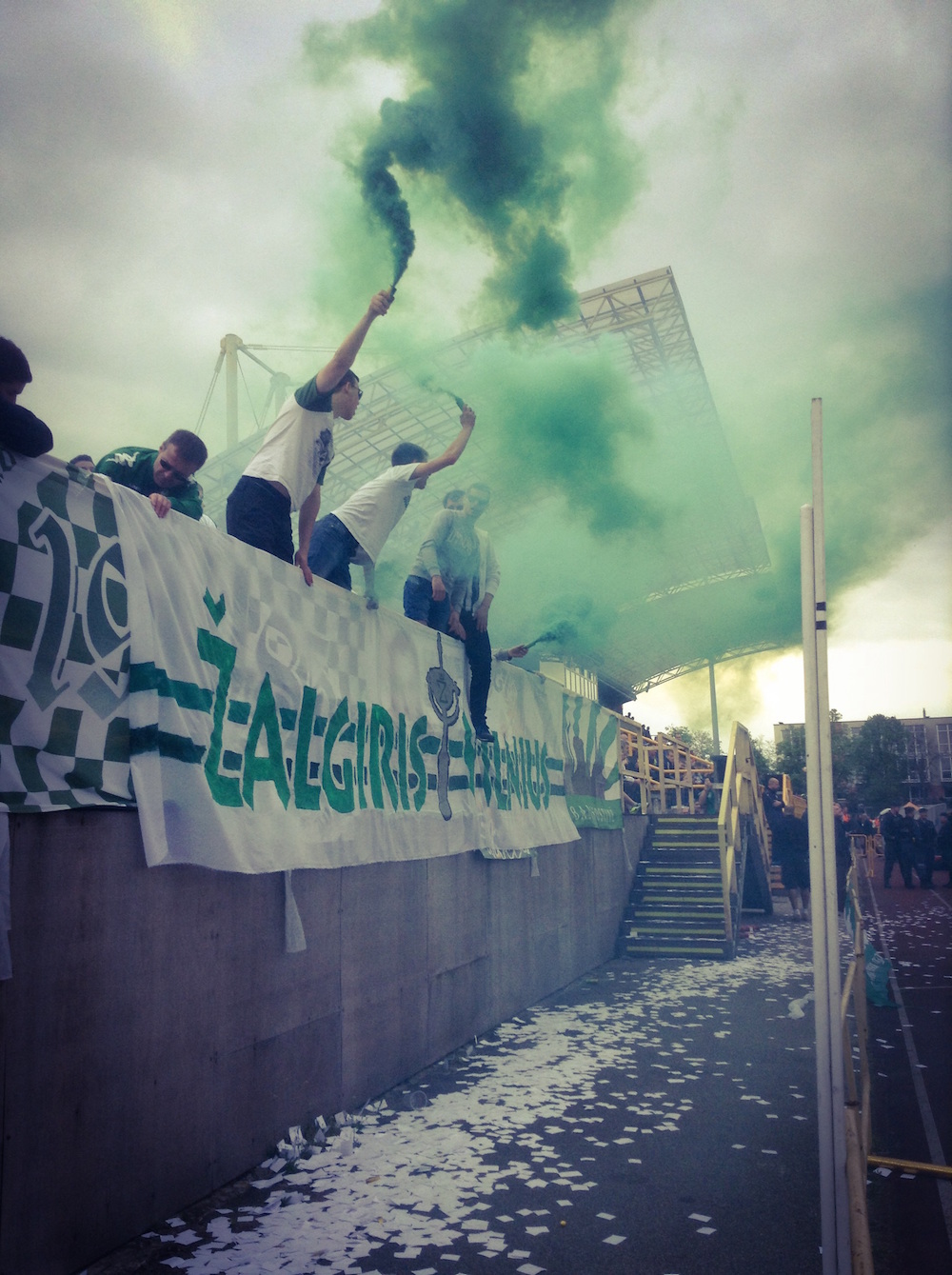 With the win Žalgiris has now overcome the domination of FBK Kaunas and Ekranas Panevėžys, who previously were the two most dominant clubs in Lithuania after the fall of the Soviet Union. With the club winning the last two league titles, and now holding the record for most cup titles in the country, Žalgiris is set to return as the flag carrier for Lithuanian football. 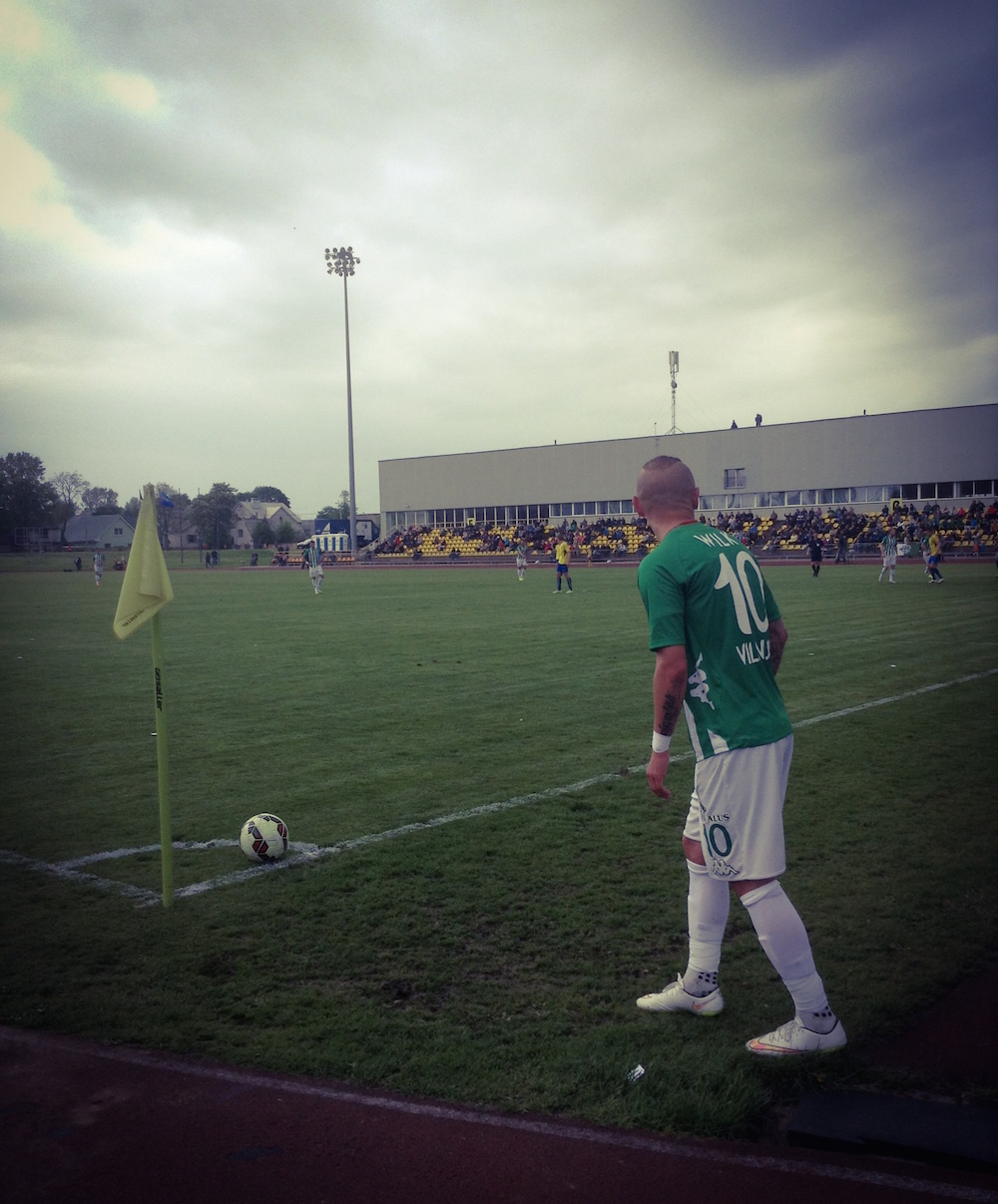 Zalgiris’ number 10 is gearing up for a corner