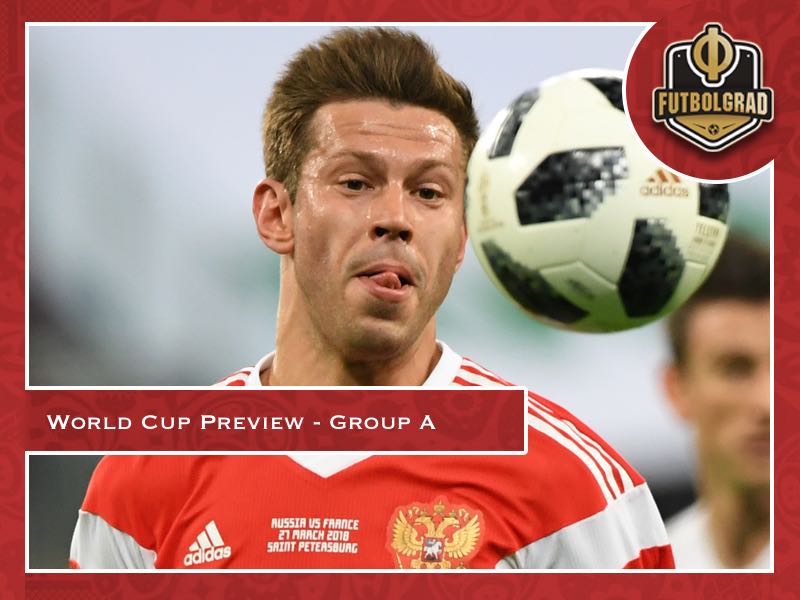 Russia have now announced their preliminary World Cup squad, and with the tournament kicking off in less than a month it is time to look ahead to the group stage of the tournament. First up our World Cup Group A preview.

Group A team by team breakdown:

It has not been an easy couple years for the host country. Russia have struggled at the 2016 UEFA European Championships and the 2017 FIFA Confederations Cup. On both occasions, theSbornaya failed to qualify out of the group stage. Seeded as the first team in Group A Russia were handed a relatively easy group at the World Cup draw last December.

Thanks to a draw that will work in their favour, host Russia have short odds (2/5) to finish in the top two in Group A and reach the knockout stage. Many more sportsbooks will release World Cup props and odds closer to the tournament in June, meanwhile Sports Betting Dime lists the top ten sites to choose from; each one rated and pier reviewed so you can guarantee you pick the right one.

Also in Group A is Uruguay, who will be tough competition for first place in the group, but Russia will be sorely disappointed if either Egypt or Saudi Arabia wind up ahead of them.

From there, the road gets a lot tougher. In the round of 16, the winner/runner-up from Group A will face the runner-up/winner from Group B, which will be Spain and Portugal in some order. Their most likely quarterfinal opponents are Argentina and France. As a result, Russia’s odds to reach the semis are 10/1, despite playing on home soil, while their odds to make the final are twice as long (20/1).

Fedor Smolov is Russia’s biggest star player. Linked with a move to West Ham United in recent months the striker will want to use the tournament to strengthen his negotiation power. Other players to watch include Mario Fernandes. The native of Brazil has been a mainstay at CSKA Moscow since 2012 and following the injury by Brazil’s Dani Alves has even been called Brazil’s best still available right-back. Unfortunately for Brazil, and fortunately for Russia, Mario Fernandes will be representing the Sbornaya this summer and in many ways could be one of the players to watch at the tournament.

Saudi Arabia have qualified for the World Cup for the fifth time but will be taking part at the biggest stage for the first time since 2006, where the country was eliminated at the group stage.

The Saudis qualified for the 2018 FIFA World Cup after finishing second in the third round of the Asian Football Confederation qualification stage behind Japan. Even on points with Australia Saudi Arabia only qualified thanks to a better goal differential directly. 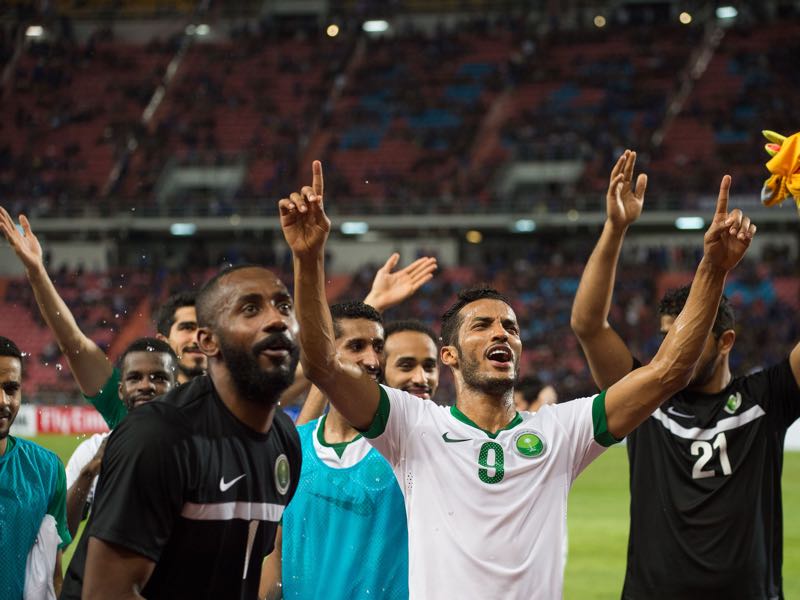 Saudi Arabia will be the biggest outsiders in Group A. (ROBERTO SCHMIDT/AFP/Getty Images)

The Green Falcons will be considered the biggest outsiders in Group A, and it would be a significant surprise if the country from the Middle East qualifies to the second stage of the tournament.

Saudi Arabia’s squad will be one of the biggest X-factors at the World Cup. Most of the countries participating at the World Cup have players at some of the top leagues in Europe. Until the winter, however, Saudi Arabia, however, was mostly relying on players playing in the domestic Saudi Professional League. As a result, the government loaned out players to the Spanish La Liga. The loan agreement, which sees midfielder Salem Al Dawsari joining Villareal, Yahya Al-Shehri joining Leganés, and Levante taking Fahad Al-Muwallad, was supposed to give Saudi players a chance to play at the highest level, but none have so far featured in a La Liga game.

Egypt are back at the World Cup for the first time since 1990. Despite having a fantastic record on their continent – the Pharaohs have won the Africa Cup of Nations on seven occasions – at the World Cup two times – 1990 and 1934.

Egypt would often fall at the final hurdle of World Cup qualification in the most dramatic fashion. Ahead of the 2014 FIFA World Cup in Brazil, for example, the Northern African nation was considered one of the favourites to participate at the tournament.

The country then, however, suffered a heavy defeat to Ghana in the playoffs losing 6-1 on the road and despite winning at home were eliminated. Ahead of the 2010 FIFA World Cup Egypt also came close with the Pharohsfinishing even on points and goals with Algeria requiring the two to play a playoff in Sudan. 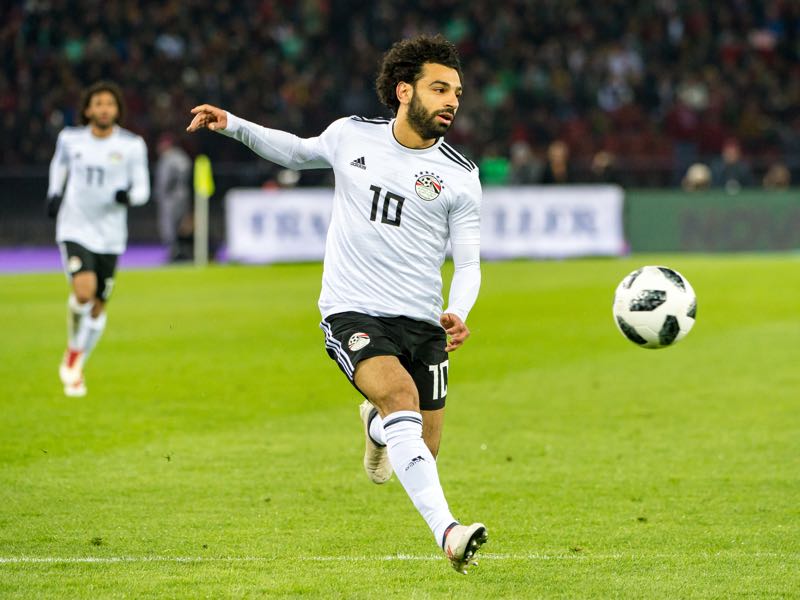 The two countries have an intense rivalry which meant that the atmosphere was intense ahead of the game. In the end, Algeria advanced to the World Cup. During this World Cup cycle, Egypt once again seemed to squander their chance by superstar Mohamed Salah scored the decisive penalty in the closing second of Egypt’s second last qualification game to see the Pharaohs advance to Russia.

It is complicated to look beyond Mohamed Salah when it comes to Egypt’s players to watch. The Liverpool striker has scored 32 goals, and 11 assists in 36 Premier League games this season. He also managed to score ten goals and five assists in 12 Champions League games for his club and will be the biggest difference maker for his country at the tournament, where, should Egypt advance to later stages, he has a chance to become a true world star.

Uruguay will be the favourites in Group A. The South American side qualified for the tournament after finishing second behind Brazil in CONMEBOL qualifying.

The two times World Champion have now qualified for the World Cup for the third time in a row and could be among the dark horses at this year’s competition. Perhaps the world’s most successful country per capita the nation has a tiny population of around 3.4 million inhabitants Uruguay is by far the smallest country in the world to have won a World Cup concerning population, 1.75 million inhabitants in 1930. 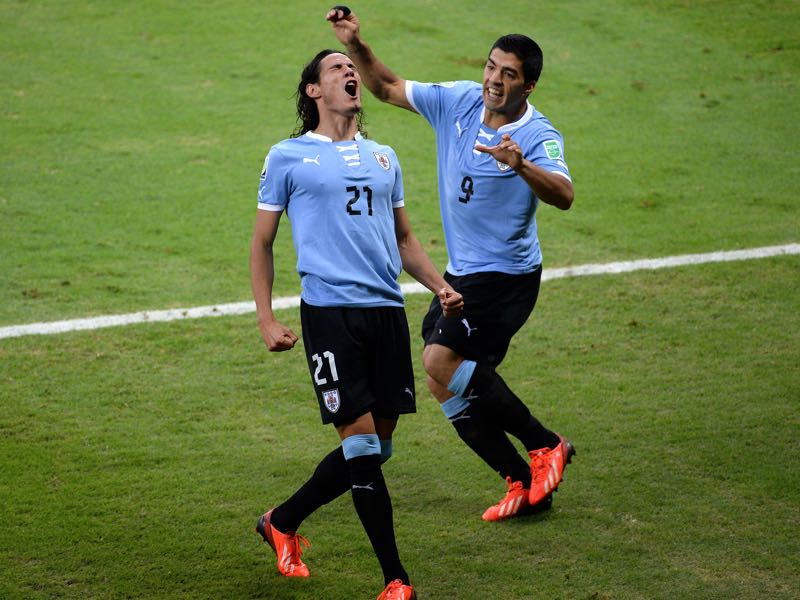 Furthermore, only six FIFA member nations with a currently smaller population than Uruguay’s have ever qualified to any World Cup: Northern Ireland (three times), Slovenia (twice), Wales, Jamaica, Trinidad and Tobago and Iceland. Uruguay are also the South American side with the most continental trophies having won the Copa América on 15 occasions – the last time in 2011.

Uruguay might be small in population, but the South American’s have some significant squad depth. Up front strikers, Edinson Cavani (Paris Saint-Germain) and Luis Suarez (Barcelona) are among the best-attacking duos in the world. Defender Diego Godín (Atlético Madrid) is world class centre-back, and Diego Laxalt (Genoa) could be a potential rising star at the tournament.