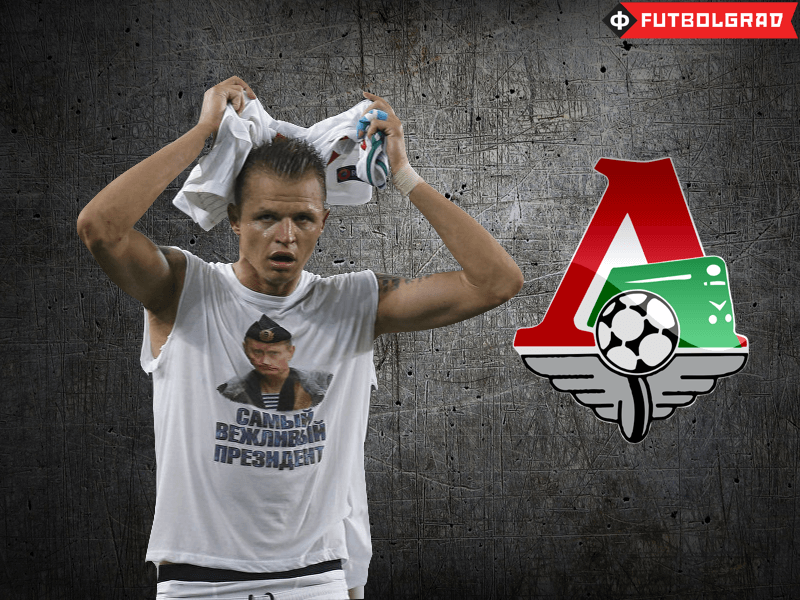 After Lokomotiv Moscow’s trip to Istanbul to face Fenerbahçe, the headlines were once again focused off the pitch. The Europa League Round of 32 fixture was the first sporting encounter between Russian and Turkish teams since the Russian Su-24 jet was shot down on the Turkey-Syria border. After that incident, relations between the two countries deteriorated rapidly. A decree was issued that banned all Turkish citizens from working in Russia, limited imports from Turkey, and revoked the visa-free agreement between the two nations (some Turkish firms contracted to build some of the 2018 World Cup stadia were exempted from the order).

Putin as a symbol of a generation

Dmitri Tarasov’s controversial decision to wear an item of clothing with a picture of Vladimir Putin above the words “Самый Вежливый Пресидент” (The Most Polite President) was as bizarre as it was nonsensical. Of course the usual cabal of media-hungry personalities from around Russia waded into the row. 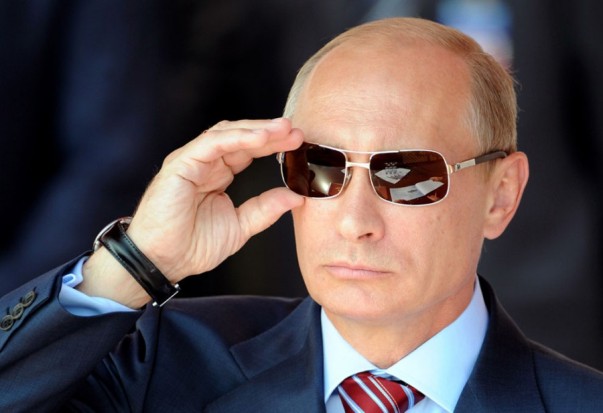 Has Vladimir Putin become a symbol of power? – Image via voenpro.ru

First off, let’s get one thing straight: It was a t-shirt. The picture of Putin in those sunglasses, that Tarasov proudly displayed after his side’s inept performance, has tested even the most indefatigable appetite of many Russians who are keen to show solidarity with their leader—often with little thought behind the actual message they are sending. One rather disorderly expatriate I know drinks from a coffee mug with the same image—and grins and says how “cool” Putin is. Harmless perhaps, if slightly misguided. Students throughout the world have hung posters of Che Guevara on their walls without giving any thought to what the Argentine doctor-cum-revolutionary actually stood for. Guevara=freedom, and Putin=power, right?

Before I wade too deeply into the merits of Putin’s policies and how they are percieved, the point is that Tarasov surely must have known what the reaction would be. It is not about the details of the message he sent—whatever that was. UEFA and FIFA’s statutes clearly state that no political or marketing messages may be displayed by players, and the governing bodies have shown themselves to be swift and strict in dealing with such issues. Niklas Bendtner, for example, was famously fined €80,000 and banned for one match for the heinous crime of lowering his shorts to reveal his sponsor’s logo at Euro 2012. It is a shame they can’t be as thorough with more significant issues such as racism and violence.

What was the Reaction in Russia?

What has the reaction been in Russia? Chechen president and honourary president of Terek Grozny Ramzan Kadyrov has not wasted time broadcasting his views to anyone who will listen. Rhetoric of patriotism and standing up for the nation’s figurehead characterised his open message to Tarasov, followed by an offer to sign him if he decided to leave Lokomotiv and to personally cover his fine. . This is the man, remember, who staged a showcase match last year (between various dignitaries and Terek players, and an Italian legends eleven including Franco Baresi and Dino Baggio) to celebrate Putin’s birthday, complete with a 120m x 80m banner that covered the pitch with—you’ve guessed it—that ubiquitous image of the birthday boy in shades. “The Best President, Happy Birthday!” it proclaimed. Same idea, different superlative.

Followers have commented on social media regarding the obsequious nature of Kadyrov’s statement. The close ties between the Presidents of the Federation and the Republic are no secret—Putin has engineered an ally in the region by supplying his friend with support, money and a platform from which to speak. Not that Kadyrov needs help finding a soapbox: his infamous rant over the PA system at half time of Terek’s match against Rubin Kazan three years ago drew derision from most quarters, so not many have taken his latest publicity-grabbing effort seriously.

The general theme of a strong nationalistic agenda resonates with large swathes of the Russian population, however, and very few people have condemned Tarasov outright for the intent of his message. In fact, the main support for the T-Shirt incident has come from within the game, with both other Russian athletes and Sports Minister, Vitaliy Mutko, offering varying degrees of encouragement. It is comforting at least, that the overriding majority of football fans have picked up on the punishment and have not fallen into a worthless debate over the impact of the T-Shirt itself.

Lokomotiv have officially criticised Tarasov for his action, which they are more or less duty-bound to do if they wish to avoid a slap on the wrist from UEFA, and they have engaged in some slapping of their own. A faintly ludicrous €300,000 fine—which has been disputed by the head of the Russian Footballers’ Trade Union, Alexey Zinin, but which Kadyrov has offered to pay himself anyway—to their own player was reported as having been dished out, possibly in anticipation of the UEFA fine that is likely heading the club’s way.

Even my Russian wife, who has little interest in football, picked up the news, and she asked what this man was trying to do. When I explained where he had been playing, she soon expressed my opinion, namely, that it was all rather pointless— and foolish given the effect he must have known it would have.

Dmitri Tarasov has nothing to do with Patriotism

Vasiliy Utkin commented on his sports.ru blog that it had nothing to do with patriotism, and I agree. It has to do with a distinct lack of foresight. Tarasov is not known for his deep intellectual thoughts, either pseudo (à la Joey Barton) or genuine, and quite what he expected to gain from this experience is anyone’s guess. “It’s my president,” Tarasov himself said after the game. “I respect him and decided to show that I’m always with him and prepared to give my support.” As numerous fans have commented on the message boards of Russian football portals, perhaps he could have done this more effectively by focusing on representing his country better on the pitch.

It’s not that he is in desperate need of boosting his PR image; his marriage to the Gucci and Prada-clad Olga Buzova is high profile enough as it is, and not all of the publicity is positive. Buzova became a TV personality by participating in, and subsequently presenting “Dom 2”, Russia’s popular, long running, and tawdry reality TV show. 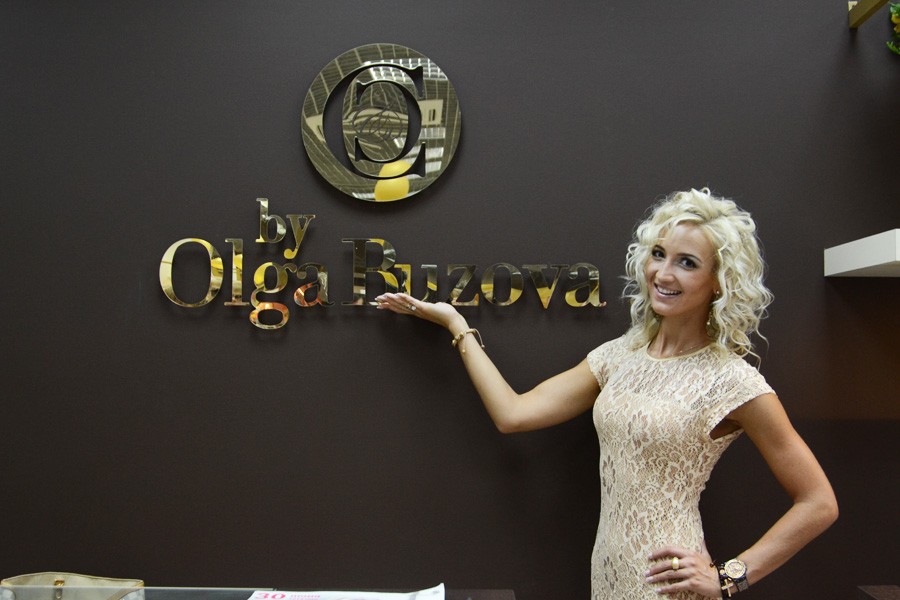 She once famously claimed live on the air that she liked a “textile” man—one assumes she was going for “tactile.” The man she married can now also be described at best as misguided and at worst as confrontational.

So what is the point of this debacle? The T-Shirt itself is a non-issue; Fenerbahçe’s fans didn’t need extra motivation to cook up a feisty atmosphere and nobody took Tarasov’s message very seriously. What is of concern, however, is the example that Dmitri Tarasov has set for youngsters who follow the game or who are coming through the Russian club systems. The tightening of restrictions on foreigners playing in Russia has inflated the sense of self-importance that many young potential stars have. So for them to see a well known figure in the game dabble in political messages with such wanton disregard for his or his club’s punishment, encourages them to show increased disdain toward the establisment. Stick to what you know, Dima.