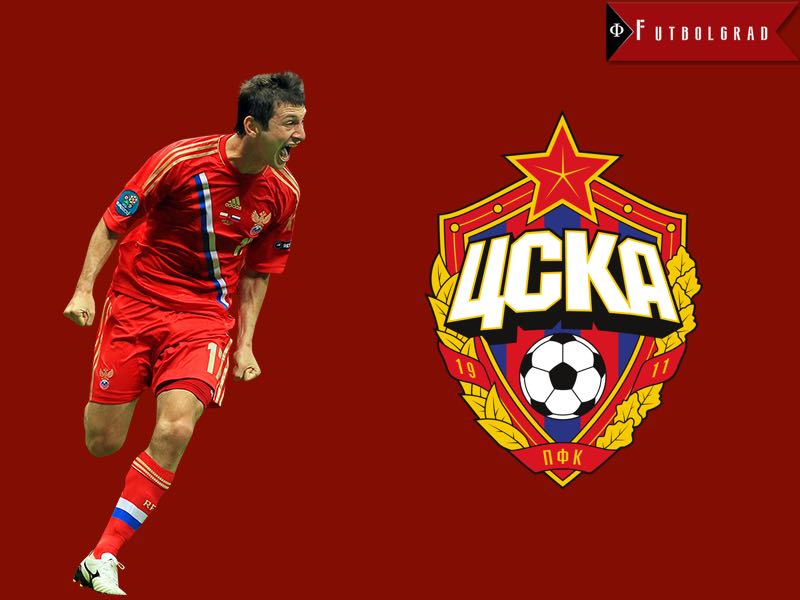 Alan Dzagoev was a major topic in this week’s marathon World Football Index Futbolgrad Podcast session. There have been plenty of rumours linking the CSKA Moscow midfielder with a move to a big league club in Western Europe.

I will write more about the potential clubs that are interested in Dzagoev in a moment, as I want to first and foremost focus on the midfielder, and his career in particular. Andrew Flint and I agreed that if Dzagoev is ever going to leave Russia this would be the time for him to do so.

Alan Dzagoev in some ways appears to have been around forever

The 26-year-old first burst upon the scene as an 18-year-old in the 2008 season, after having joined CSKA Moscow from the famous Konoplyov football academy in 2007. Based in Togliatti, the football academy was founded in 2003 as SDYuShOR Krylia Sovetov, and has become part of a Russian wide academy system whose patron is Chelsea owner, Roman Abramovich.

It was in Tolyatti where Dzagoev was taught tactical and situational awareness. For Dzagoev, the move to Tolyatti (located on the Volga River in the Samara oblast and most famous for being the home of Russia’s largest car manufacturer AvtoVAZ [Lada]) from his hometown Beslan (located in the Caucasus Republic of North Ossetia-Alania) as a 16-year-old in 2006 meant that he had to grow up much earlier than most kids in his age group. 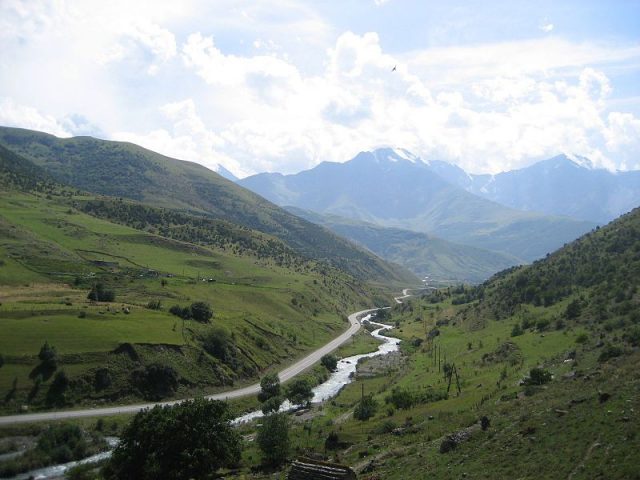 As we discussed in depth in the Futbolgrad Extra Podcast this week, the Caucasus is a special place within the Russian Federation. Like the neighbouring provinces of Ingushetia, Chechnya, and Dagestan, North Ossetia-Alania has a multi-ethnic makeup with seven major ethnic groups that make up the 700,000 inhabitants.

Also, like the neighbouring republics, North Ossetia has been hit by terrorist attacks. In 2004, Dzagoev’s hometown of Beslan was the centre of a terrible school siege in which 1,100 people, including 777 school children, were taken hostage by Islamic Groups that originated in Ingushetia and Chechnya. Three hundred hostages, including 186 children were killed when Russian authorities stormed the school building.

At the time, Dzagoev was just 14-years-old, and his father, Tariel, had actually rushed to his school thinking that it was Alan Dzagoev’s school that was under attack, only to find out that it was school number one, rather than school number four, that was under attack. The entire scenario left the family worried about security in the region and, when the opportunity came to have Alan leave the city, his family supported the move to the academy in Tolyatti, which is 1550 km—a 21 hour car drive—away from his hometown.

The Caucasus was Dazgoev’s most important football school

Yet, the Caucasus was perhaps also Dzagoev’s most important football school. Not unlike Central Asians, Caucasians face constant xenophobia, and racist stereotypes in Russian society. Having lived in Moscow myself, I have witnessed countless incidents of Caucasian people being stopped in the streets by Russian security forces for random checks—what, for lack of better terminology, can only be described as racial profiling.

But there is another stereotype about people from the Caucasus; they are believed to produce the most technically gifted football players in the Russian Federation. In fact, one of the origins of this stereotype goes back to the time of the Soviet Union when the Georgian team, Dinamo Tbilisi, was given the nickname “the Uruguayans” because they played the most beautiful, and technically raw, football in the country.

Much like South Americans, those technical abilities are schooled from playing football on the potholed streets in what are some of Russia’s most neglected economic regions, Alan Dzagoev learned how to play football on the streets of Beslan. But there is also something else about the people from the Caucasus, the ethnic diversity brings in cultural elements to their football that makes players from the region play almost like South Americans rather than the more pragmatic type of football you see from Ukrainians, or Russians.

Furthermore, having undergone the rough education of living in the Caucasus, and moving to Tolyatti at a young age, meant that Dzagoev was mature beyond his years when he joined CSKA Moscow in 2007. In the 2008 season, he burst on the scene and right away it was evident that CSKA Moscow had a real talent on their hands.

Dzagoev – Will he stay at the Red Army club forever?

Now eight years later, Dzagoev has further matured into a player who is not only technically gifted, but also has a tactical maturity that makes him the heart and soul of CSKA Moscow. At the same time, it seems as though he has been at the Red Army club forever.

Indeed, eight years is a long time in football, and Dzagoev, now aged 26, will most certainly think long, and hard on what could, or should, be next for him in terms of his career. One thing is for certain, it appears that CSKA Moscow have reached the top of their potential and, in many ways, are a club in decline. 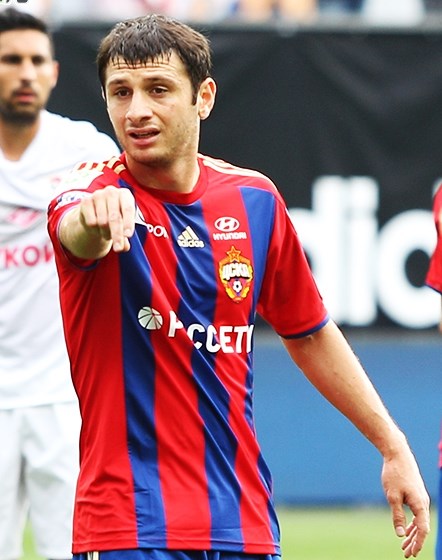 The departure of Leonid Slutsky from CSKA has been discussed in depth on this page. Andrew Flint, Vadim Furmanov, and I also discussed the arrival of Viktor Goncharenko at CSKA Moscow as the new head coach in Episode 5 of the Futbolgrad Podcast, and we agreed that the Red Army team will now undergo a lengthy process of rebuilding the side.

For Dzagoev this will have big implications, as he is very much the only piece in the squad that could be monetized right away. Furthermore, CSKA Moscow is out of European football, with little to no chance of reaching a Champions League spot this season.

The attacking midfielder is, therefore, at an important junction in his career. Will he remain in Russia, like Igor Akinfeev, or Aleksandr Kokorin, and remain a talent who has never shown his ability in one of the big leagues? There always has been the stereotype that Russian players have a hard time leaving mother Russia.

Dzagoev is not your typical Russian national team player

But, in this regard, Dzagoev is different. His parents came to the Russian Federation from South Ossetia, which is located in Georgia but is currently occupied by Russia, and, therefore, technically, are immigrants in their own country. Then we have to consider the fact that Dzagoev moved to Tolyatti, which might as well have been in a foreign country, and then to Moscow at a young age. 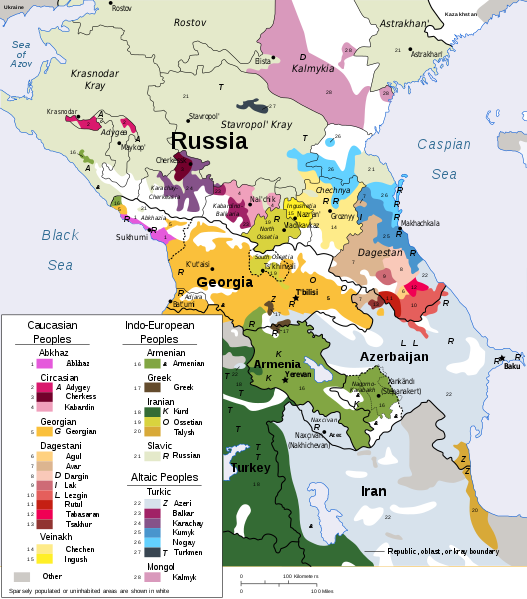 The ethnic makeup of the Caucasus – Vectorisation of CIA map CC-BY-SA-3.0-migrated

Given his cultural background, and the fact that he had to mature early, I believe that Dzagoev is the member of the current Russian national team would be the one most likely to leave Russia. In fact, Dzagoev himself has been outspoken about the fact that he wants to move abroad to play in England.

While growing up, he was reportedly a big fan of Chelsea’s Frank Lampard, who played for the team that had the same patron as his academy. Recently, he has made statements that he is ready for a new challenge, and there is indeed a big chance that he could be on the move in the winter break.

New CSKA head coach Goncharenko, in fact, might be willing to sacrifice the midfielder in order to bring in the necessary funds to sign new players in other areas of the squad. CSKA Moscow also has the talent in the likes of Aleksandr Golovin, Fedor Chalov, and the academy player Timur Zhamaletdinov to replace Dzagoev in house.

What will he do next?

Now to the question as to where I think he could be going. Futbolgrad has learned that the club that is the most interested in him is the Liverpool-based club Everton FC. This rumour further got traction from the Kop Left Podcast where Tony Scott from the Liverpool Echo stated that Everton would be spending big in the winter transfer window.

On the list of potential new signings is a creative midfielder and, as Andrew and I pointed out in the Futbolgrad Podcast, when it comes to creative midfielders in the price category between €15 and €25 million, it would be hard to look beyond Alan Dzagoev who, after all, has the experience of eight years of professional football both in the Europa League and the Champions League.

Dzagoev was, in many ways, the only bright light in CSKA Moscow’s Champions League campaign this season, and those who wonder what kind of player he is, just need to look at his Champions League matchday 1 performance against Bayer Leverkusen.

Another factor is that CSKA Moscow are looking at bringing in a striker, and are interested in signing Everton’s Oumar Niasse, who seems to be out in the cold under manager Ronald Koeman despite having two impressive campaigns with Lokomotiv Moscow in the Russian Football Premier League.

I personally do not believe in swap deals, but CSKA’s interest in Niasse could open the doors for negotiations about a possible deal for Alan Dzagoev. Does this mean Dzagoev will end up at Everton? No, not necessarily, as a player of his calibre will have multiple parties interested in him. One thing is certain, however, for Alan Dzagoev the time is now when it comes to be making a move away from Russia.