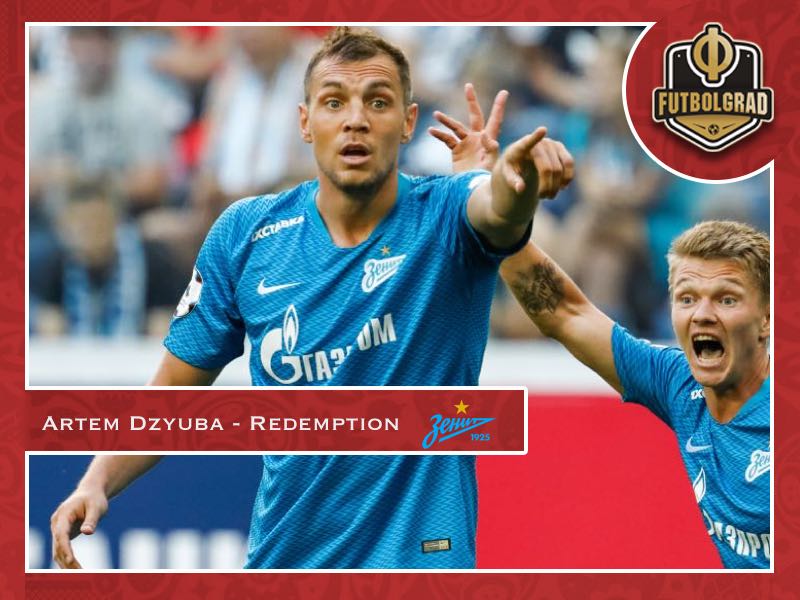 Artem Dzyuba – Zenit’s forward continues to rise from the ashes

In the end, it was 8-1 for Zenit St. Petersburg. The Russian side had crushed Dinamo Minsk in the second leg of the Europa League second round qualifiers after losing the first leg 4-0 in Belarus. Altogether it was an absolution, for the club, the new head coach Sergey Semak and striker Artem Dzyuba.

Dzyuba was very much the hero of the match. The 29-year-old striker had scored three of Zenit’s eight goals that evening – including the crucial 3-0 and 4-0 goals that got his club into extra-time.

Dinamo Minsk, however, made it 4-1 in the 99′ minute. As a result, Zenit needed another two to survive. Two goals in 20 minutes would it be possible?

Sebastian Driussi made it 5-1 in the 109′. All of a sudden the match was back on and then in 115′ minute Zenit won a crucial penalty. Dzyuba, knowing what was on the line, stepped up and hammered the ball home to make it 6-1.

On that result alone Zenit would have been through. But Robert Mak would add two more goals to make it 8-1. Perhaps it was somewhat telling that it was Mak and Dzyuba that got the crucial goals in the end, both after all were shunned by former head coach Robert Mancini.

The focus, however, needs to be on Artem Dzyuba. For years the tall striker, often rightfully so, had been criticised for not doing enough with his talent.

To slow, not enough work rate, unable to track back, were just a few of the things that came to mind when speaking about Dzyuba. For years, however, Dzyuba was protected. His place at Zenit, and therefore the national team, secured by his high salary and the 6+5 rule that forces Russian clubs to play six national team-eligible players at any given time.

Under Mircea Lucescu and, even more dramatically Roberto Mancini, Dzyuba slowly fell down the pecking order at Zenit, however. Finally, last January he was seen as surplus material at Zenit. Mancini favoured other players, mostly the Argentines and Aleksander Kokorin.

Artem Dzyuba, in turn, was told to find a new club. Forced to train on his own for days Dzyuba would eventually join Arsenal Tula in January. Adding injury to insult Dzyuba also lost his spot in the national team to his rival Fedor Smolov, who by most accounts was the biggest star in the national team going into the World Cup.

Artem Dzyuba then made the most out of his time at Arsenal, however. Scoring six goals, including one against the team that owned his contract, Dzyuba managed to jump on the World Cup train after all.

Once at the World Cup it took the burly striker just one game to take the number one position up front. Smolov struggled against Saudi Arabia in the first match, and head coach Stanislav Cherchesov reacted bringing on Dzyuba for Smolov in the second half.

Then in the 71′ minute, Dzyuba made it 3-0. Furthermore, the striker was a constant threat making countless runs and stretching the opposition’s defence allowing Russia to win the match 5-0.

That game was the turning point. The 196cm tall striker seemed like a new player.

An emotional leader on and off the pitch Artem Dzyuba scored three goals and two assists in five World Cup games. He also very much became the face of a Sbornaya side that surprised the world, not just with their performances on the pitch, but also in their presentation off the pitch.

Dzyuba is in many ways a jokester. Finding him in the mixed zone is easy – it is where all the journalists are laughing. It is the sort of demeanour that was both hated and loved by his coaches. Hated when he did not perform, loved when his team won.

The work rate is finally there

To often that joky attitude, however, was seen in connection with his work rate. A work rate that did not see him track back to help his teammates at Zenit, or before the World Cup in the national team.

The World Cup eradicated that, however. Dzyuba worked hard and put in the kilometres on both ends of the pitch. Hence, when the tournament ended the striker, all of a sudden had options – options outside of Russia.

It would have been easy for him to leave at that point. Zenit had sent him away after all. But then there was a sense that he was not done yet in St. Petersburg.

So days ahead of the return leg he announced that he would stay. A big statement of intent given that Zenit, at that point, looked like a sure thing to go out in the qualification stage of the Europa League.

Artem Dzyuba, however, had made his bed and then on Thursday he made sure it would be comfortable to lie in. Those three goals have now paved the way for Zenit surviving in Europe and to do potentially great things in the Europa League.

It also allows Dzyuba to show the world his full potential finally. Potential that was always there but in recent months has been finally unearthed.