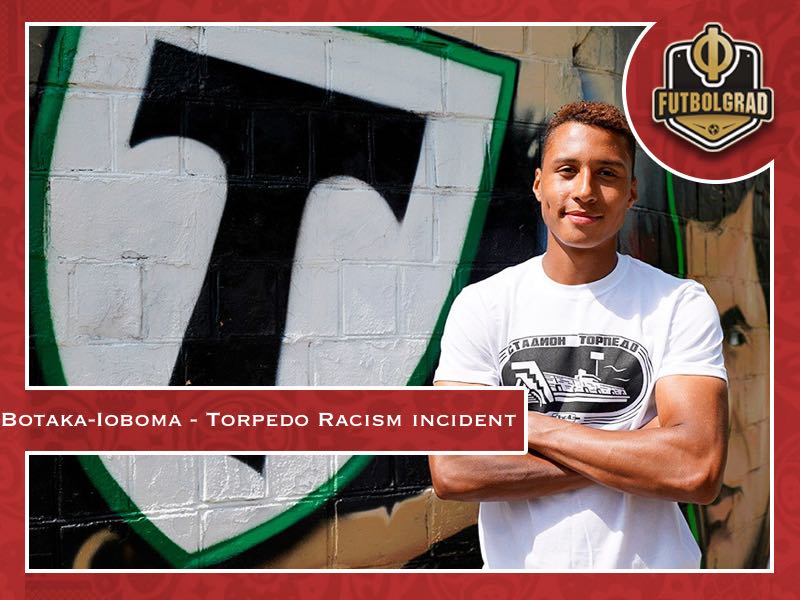 No sooner has a harmonious, safe, well-run World Cup finished than a group of Russian ultras are involved in a racist incident. Briefly, the story goes like this. Earlier this month, PFL (third tier) side Torpedo Moscow announced the signing of defender Erving Joe Botaka-Ioboma, a Russian of Congolese descent who started his career at Torpedo but recently played for Lokomotiv Moscow farm club Kazanka.

Torpedo fans from the Zapad-5 ultras group responded on Vkontakte: “Dear Torpedo Moscow leadership, seeing as you believe it is acceptable to come to our home, our family, and not to respect our traditions and rules, we will afford ourselves to behave similarly! Let us see who this works out best for!” A further comment that was then deleted was a little more explicit: “We have black in our colours, but only white in our ranks!” 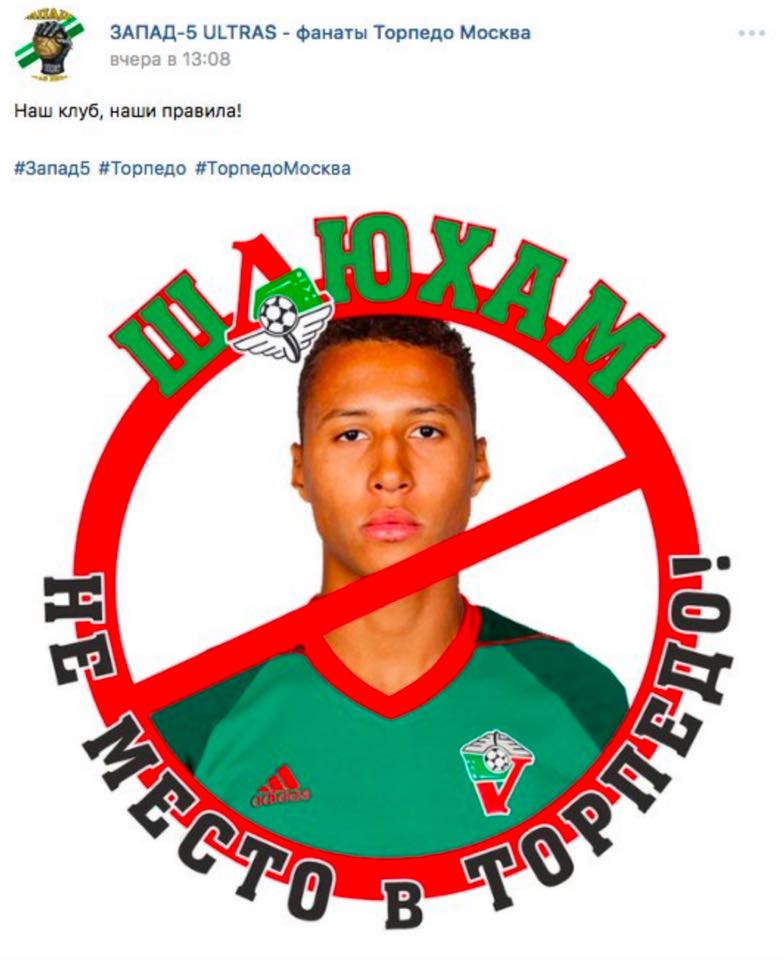 Shortly after this, and following a further post in which Botaka-Ioboma was called a “slut” – apparently, as he’d moved from Torpedo to Lokomotiv – Torpedo presented their new players to fans. Botaka-Ioboma was not part of the meeting.

Botaka-Ioboma incident shows the dark side of Russian club football

The club initially did its best to try and keep everyone happy – including those having made the above statements: “We respect and work hard to listen to the views of different groups of fans,” said club President Elena Elentseva, “They’re all important for us.” A slightly stronger, but only slightly less generic, sentiment followed. “Racism is a negative phenomenon which does not have the right to exist. We stick very strongly to this point of view, and will fight intolerance every way that we can.”

The story came to a neat conclusion, and all of a sudden, when Torpedo blamed the transfer breakdown on being asked by Lokomotiv for a transfer fee for the player due to his age, which had not been expected. Both the player and his representative stated they had not been aware of any racism and walked away bearing no malice. The club, seemingly ready to stick to its earlier sentiments, called in the police about racist social media posts.

Regardless of the ins and outs of the transfer, it seems clear that a group of Torpedo ultras were not happy about having a non-white player at the club. Russian fans, in general, seem to have suffered as a result. After football writer Artur Petrosyan Tweeted about the story in English, over 50 fans commented. Here are some extracts:

“Not a peep while the whole world was watching the WC, acted like angels”

“Amazing isn’t it, able to act like proper humans when they want”

“Putin had the racists, hooligans etc on house arrest hence only nice Russians about”

“World Cup is over, conned the world, back to normal”

“After such a good WC they go and let themselves down by doing this. Shame on them”

Obviously, we need to go with the caveat that this is Twitter we are talking about, but the above clearly implies that the views expressed by a group of Torpedo ultras represent the rest of Russian fans as well. Is this fair? Let’s put it to the test.

One hundred fans have commented on the original Championat story. On the site, comments can be awarded a ‘thumbs-up’ or ‘thumbs-down’ by readers. The ten comments with the most thumbs-up are as follows:

“Torpedo? It’s some kind of beast from a fairytale that nobody’s seen for 100 years. I heard that it’s inhabiting the doldrums.”

“Twenty alcoholics threatening the club again. ‘Let us see who this works out best for!’ Like a kindergarten.”

“An amazing piece of news. I learnt from it that it seems Torpedo have fans and that they’re racists.”

“The World Cup has gone, and everyone’s back in their own world.”

“So do they think they represent all Torpedo fans and think they can speak for all?”

“It seems the World Cup slogan has bypassed Torpedo fans. Strange that they didn’t express their concerns on Sunday before the France-Croatia game. I wonder if their verdicts would have been so categorical if Mbappe were moving to the club?”

“Have they gone out of their minds or something? Why protest against your own academy graduate? Maybe he’s exactly what’s needed to plug a gap.”

“A group of fans in their own name apparently speak for all. In fact, if they want to see a reborn, strong Torpedo then they shouldn’t split players by their beliefs of colour of skin, but only into whether they are professionals or not.”

Popular site sports.ru also ran the story, and has a similar plus/minus voting system for the best and worst comments. The most popular comments from over 300 posted, voted by readers after the it was announced that Botaka-Ioboma wouldn’t sign for Torpedo:

“Nobody needs Torpedo – a splintered club”

“The club’s managers are idiots, acting because of a couple of psychiatrically ill scumbags.”

“And this right after such a World Cup…”

“After this news the Russian Football Union should automatically ban Torpedo. And all their home games should be played behind closed doors. Bloody idiots!!!”

“You are an embarrassment to such a great club.”

“Fans? Why is sports.ru so carefully avoiding calling them morons?”

“A real pity the club is bending to the will of scumbags, disappointing.”

“F**king hell, shameful. One lot of idiots meets the needs of the other. How shameful.”

A strong response from General Director of Russian Football Players’ Union @XelaVotoz to incident in which Torpedo fans expressed racist sentiments this week when an African-Russian player moved to their club. https://t.co/DMQF4kJj3i

Championat also reported former Russia and Lokomotiv Moscow goalkeeper Ruslan Nigmatullin’s comment that Torpedo were the “shame” of Russian football, and similar fan opinions to the above appeared under the story. Comments from fans that maybe weren’t amongst the most popular (but nevertheless popular) were to suggest widening the FAN ID system out to clubs, point out that the first Nigerian player in Russia – back in 1997 – played for Torpedo, and to ask when Zenit St. Petersburg – some of whose fans have made similar comments in the past – would be singled out for as much attention.

There’s a snapshot of how Russian fans are feeling, anyway – judge for yourselves whether they’ve let themselves down, or are acting like proper humans…