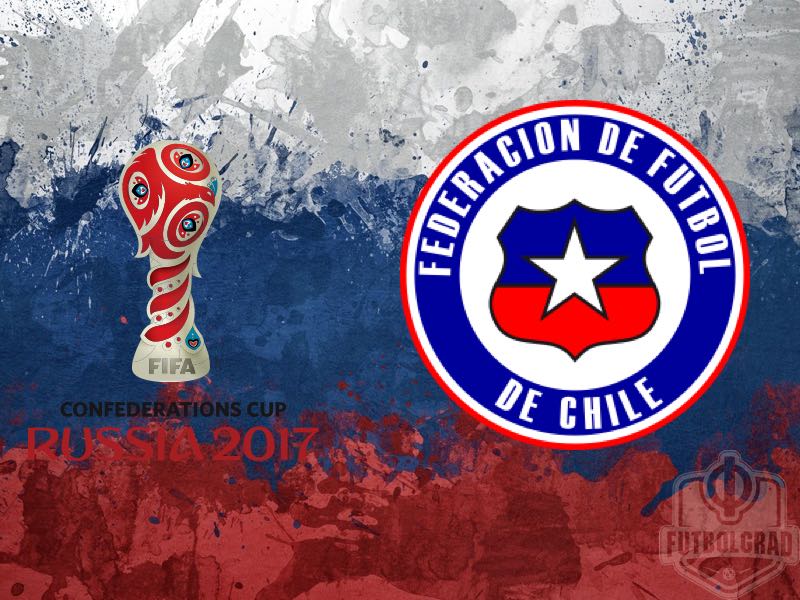 Chile is coming into the Confederations Cup on a wave of its most successful period of international football. Long excluded from the prestigious Copa América, Chile finally won its first South American championship in 2015. Under then manager Jorge Sampaoli the revolution started by Marcelo “El Loco” Bielsa reached its full potential. Bielsa’s Chile was gifted with a generation, of world class players: Claudio Bravo, Gary Medel, Arturo Vidal and Alexis Sanchez to name a few. Sampaoli transformed the Chile crafted by Bielsa: a team characterized by fluid and surgical attacks, which at times was petulant and prone to mental lapses; into a relentless and uncompromising foe. 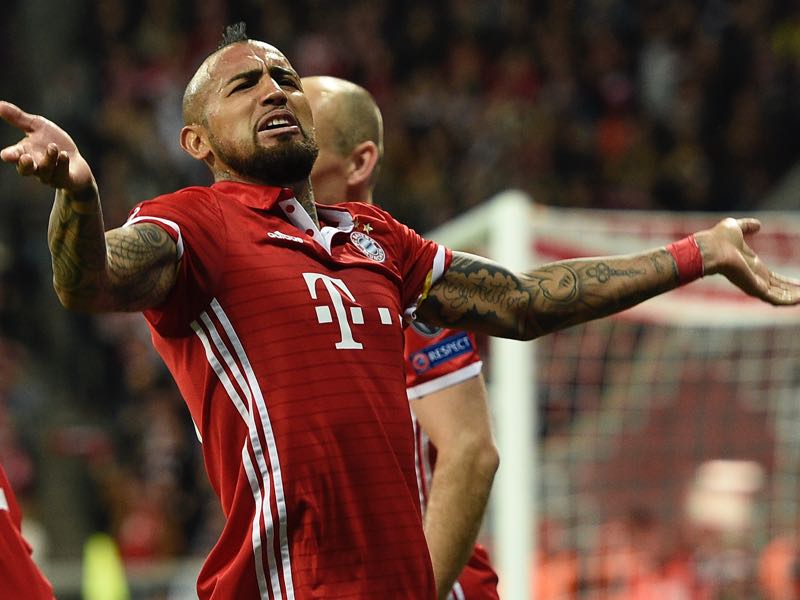 Despite an exciting group stage in the 2014 World Cup, Sampaoli’s team fell short in penalties to Brazil in the round of 16. La Roja entered the 2015 Copa América with a point to prove. If this was to be Chile’s finest generation, they needed to do it on home soil. The team played with characteristics more familiar to other South American rivals and a willingness to battle at all costs. That attitude was on display in infamous moments like defender Gonzalo Jara’s fingered assault on Uruguay’s Edinson Cavani in the quarter-finals. It also helped Chile neutralize Argentina’s attack and win the Copa América on penalties.

To prove that Copa was no fluke, Chile then under Juan Antonio Pizzi went on to win the Copa América Centenario hosted in the US in 2016. The generation of Argentine managers that transformed La Roja’s has contributed to Argentina’s demoralized disarray and existential crisis. It has been a reversal of South America’s footballing history.

World Cup Qualifying, however, has complicated Chile’s claim to South America’s best team. A six-way battle for the remaining 3.5 spots (Brazil in first have run-away with the qualifiers) had until recently Chile on the outside looking in. Despite recent 3-1 victories over Venezuela and Uruguay, goals have been hard to come by reflecting a reliance on Arsenal forward Alexis Sánchez to provide the magic. Now wily veterans Chile’s campaign has turned to grinding out results. 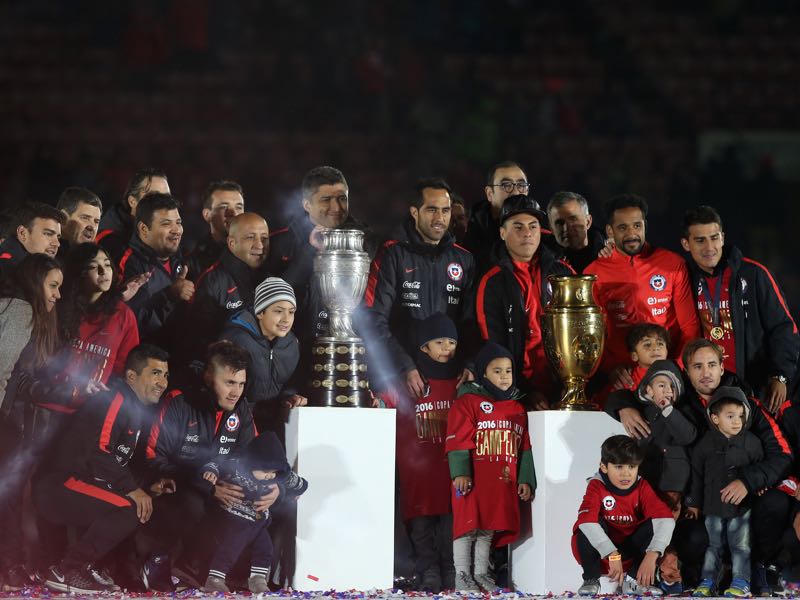 In part, Chile’s struggle is down to the fact that La Roja sees the early twilight of its golden generation. Age catches up with all football teams, and several key players are passing into their early 30s. The upcoming Confederations Cup and World Cup will likely be the last opportunities for many of these players to leave their mark on international football. Already there are hints of a changing of the guard. Jorge Valdivia and Matías Fernández have been left off the Confederations Cup squad. Valdivia has been an enigmatic and creative player for Chile, while at times invisible to go with his nickname “El Mago” (the Magician).

Chile, however, can still count on one of the strongest and most aggressive starting midfielders in the world. Look to Arturo Vidal and Carlos Aránguiz to orchestrate the attacks. Vidal is known for his lethality around the box. Marcelo Díaz is the anchor to this triumvirate. Díaz has been key to Celta de Vigo, a team which started off well but fell as matches piled up due to its late pushes into the Copa del Rey and Europa Cup. Pablo Hernández, another Celta player, will also see minutes for Chile.

Alexis Sánchez, cutting in from the left, is expected to provide most of the goals and be the energetic pace-setter to Chile’s attack. While he has never been the same threat for his clubs, Eduardo Vargas is Chile’s only other consistent source of goals. Chile has not been able to count on a traditional number-9, often seeing Vargas take up this role, with José Fuenzalida playing on the wing.

Defensively, Chile depends upon consistency and physicality. Beausejour – Jara – Mendel – Isla will likely be the line-up at the back baring injuries. If at left back, Beausejour will add to the attack, filling in behind Sánchez. Despite an uneven season at Manchester City dealing with injuries, a hostile press, and regularly seeing minutes go to his partner Willy Caballero, there is no doubts when it comes Claudio Bravo’s position for Chile. Bravo continues to be world-class when defending Chile’s goal. 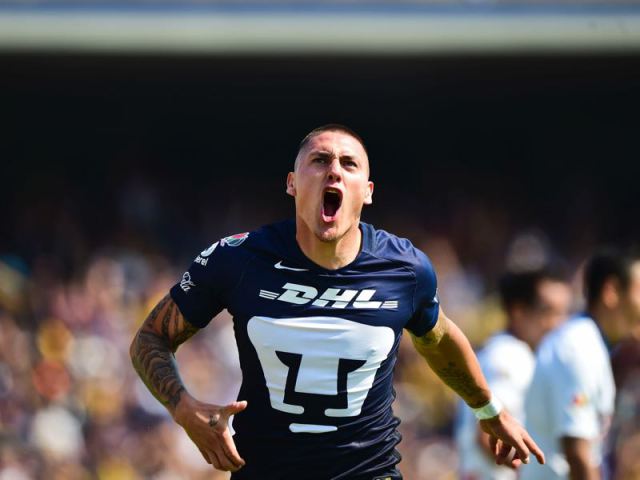 The future of Chile has yet the be placed on the shoulders of young players like Nicolas Castillo and Felipe Mora (Universidad de Chile). Pizzi has not shown a lot of trust for this new generation, and it is unlikely many will get their chance at the Confederation’s Cup. If scoring becomes an issue, the responsibility may fall on these young players to prove their worth. Castillo, who demonstrated his adept touch in front of the net playing this year in Liga MX’s Pumas may not get his chance due to a recent ankle injury. If he does, he has to prove he is no “pecho frio” and has the mettle and desire that his critics claim he lacks when wearing red.

Placed in Group B, Chile will face Cameroon, Germany, and Australia in the group-stage. Unlike Germany (match: June 22) Chile will be bringing its first-team supported by young Chilean-based players. Well prepared through their route to the World Cup, Chile should expect to come out on top of this group but will first need to break down a well-organized Cameroon in the opening match (Moscow, June 18). A bad result to close out the group against Australia (June 25), though often a determined side, would be an embarrassment. Chile is preparing for this tournament with matches against Burkina Faso (June 2), Russia (June 9), and Romania (June 12).

Chile – What to expect:

Chile knows how to battle and will be bringing its veterans at the peak of their careers. The golden generation will be looking to add to their international plunder and prove themselves, particularly against European opponents. Potentially seeing the World Cup as just outside of their grasp, the Confederation Cup is a target for this team. Chile should advance out of the group stage where we can expect La Roja to go toe-to-toe with any opponent. Proven winners of tense finals under Pizzi, Chile despite questions in the attack, should be considered a tournament favourite.

Matt Hawkins is a PhD Candidate in Anthropology at Carleton University, Ottawa. His research covers the intersections of football and politics in Argentina. His dissertation focuses on the Return to Boedo campaign by supporters of Club Atlético San Lorenzo de Almagro. He infrequently writes on supporter culture for stonymondayriot.com and can be followed on Twitter @mhawkin2