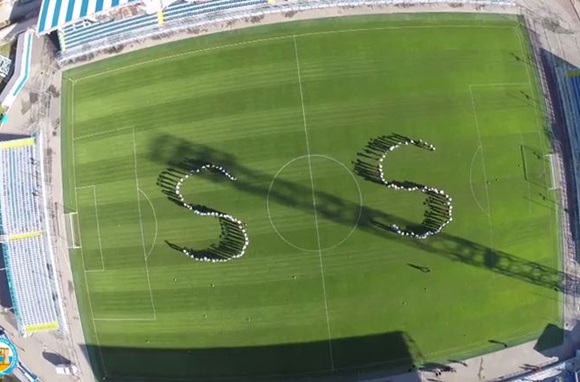 This week marked the one-year anniversary of Russia’s annexation of the Crimea, an event which had far reaching consequences for the Crimean football clubs Tavriya Simferopol, FK Sevastopol, and the lesser-known Zhemchuzhina Yalta.

After the annexation the three clubs were formerly dissolved, just to re-emerge as new clubs that could participate in the Russia football pyramid. These new clubs TSK (Tavriya Simferopol Crimea) Simferopol, SK Chernomorskogo Flota (SKChF) Sevastopol, and Zhemchuzhina Yalta played a handful of games in the third-tier Russian Professional Football League. On August 22, 2014 the UEFA Emergency Panel stated “that any football matches played by Crimean clubs organised under the auspices of the Russian Football Union (RFU) will not be recognised by UEFA until further notice.”

The Russian football authorities, however, believed that they had found a back door by registering the clubs as new entities on Russian territory. Under this format the clubs continued to play in Russia until December. This blatant move to circumnavigate UEFA rulings was heavily protested by the Football Federation of Ukraine (FFU), which sent a letter of protest to both FIFA and UEFA asking them to punish the Russian Football Union.

The FFU feared that the political implications of the Crimean clubs playing in Russia could politically legitimize the annexation of the Crimea by Russia. Then on December 4, 2014 UEFA banned the Crimean teams from playing in Russian competitions. Fearing that UEFA could ban Russian clubs from participating in UEFA competitions and that FIFA could potentially withdraw the 2018 FIFA World Cup, the Russian Football Union finally gave in to UEFA’s decision.

Furthermore, UEFA general secretary Gianni Infantino stated, “that for the time being the decision has to be to consider Crimea as a special zone for football purposes.” Subsequently Crimean clubs and Russian officials complained that this would essentially end professional football on the peninsula, but as a Ukrainian journalist told me in December: “you can’t steal a car, and then expect to drive it around in public; the same is true for Crimea’s annexation by Russia.”

UEFA officials have since visited the peninsula to inspect the football infrastructure of the peninsula. On March 5 UEFA stated that they would look into the possibility of setting up a new Crimean Football League at the UEFA Congress on March 24. Meanwhile, the players that have been under contract at the three Crimean based clubs have been without work since January. As Sergey Belebeyev from the All-Ukrainian Association of Professional Football Players stated to the BBC Sportshour on March 14 2015: “the situation is difficult as the clubs have now de-facto ceased to exist.”

It is therefore not without irony that the clubs, of which many fans actually opposed the annexation by Russia, have since become the victim of politics, and that the Crimea will most likely become another ostracised football market in Europe, not unlike Kosovo, North Ossetia, or Abkhazia.