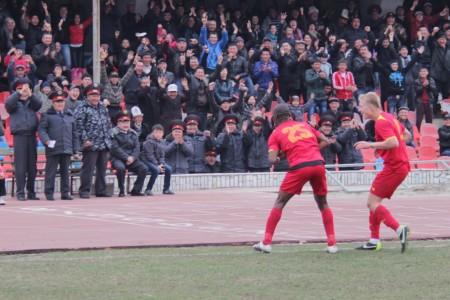 Futbolgrad readers that have been glued to coverage of the Asian Challenge Cup – one part of which has been taking place in the Kyrgyz capital Bishkek – may have noted a curious West African subplot to proceedings. Indeed, the balance of power in the tournament, an ad-hoc affair staged across various countries to cater for national teams that missed out on entry into the continent’s World Cup Qualifying groups, is currently being upset by the goal-scoring prowess of David Tette, a spring-heeled striker whose formative years had absolutely nothing to do with the country he is representing: Kyrgyzstan.

So, at the risk of upsetting delicate discourses on ethnicity, state and citizenship in the Post-Soviet space, I’ll wade in: David Tette is an import.

Having seen him in action for Kyrgyzstan’s leading club outfit, FC Dordoi, I can confirm he is an impressive import. 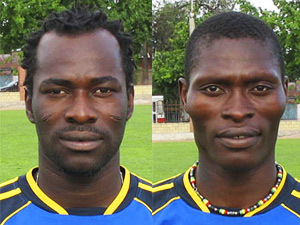 Tago and Tette – teammates for club, but not yet country

Despite a lack of height, Tette is noteworthy for the number of goals he scores with his head, either out-leaping clodhopping centre-backs from set-plays or diving in where it hurts in the goalmouth scrambles that define Kyrgyzstan’s domestic game. With two quick feet and the capacity to run the channels all day, he’s probably the most dangerous player the country has seen since independence.

Not necessarily the best, however. That is an honour he would probably have to contest with Daniel Tago, a domineering centre-back at the same club.

Up until relevantly recently, both Tette and Tago were acknowledged as Ghanaians. That Tago was a slightly better acknowledged Ghanaian – his father is a tribal King and the owner of a chain of supermarkets in their distant homeland – is irrelevant for the purposes of this post. When Dordoi’s well-connected and football-mad owner Askar Salimbekov succeeded in luring the pair to Kyrgyzstan in 2008, they were described by the local press as legionari – foreign players. By most reasonable definitions of the term, both Tette and Tago are as Kyrgyzstani as I am: not very.

But a quick glance at Dordoi’s Wikipedia page reveals an interesting fact. Where the squad roster used to display two Ghanaian flags, it now features just one. David Tette has apparently become a Kyrgyz citizen, handily in time for the Asian Challenge Cup.

Of their three games in Group B, Kyrgyzstan have now won all of them one-nil. In each of the games, against Macao, Pakistan and Tajikistan respectively, Tette has scored the deciding goal. As group winners, Kyrgyzstan will now go through to the final stage of the tournament, held in the somewhat more glamorous climes of the Maldives.

Sticking up for even-the-vaguest idea of the nation-state in an era of ‘the borderless world’ is a futile project. I found this out during the Olympics last summer, when attention was drawn to the fact that Kazakhstan’s weightlifting gold medallists were in fact Chinese-born and “poached” by the Kazakh Olympic team on the basis of their potential as future weightlifting champions. When I (in addition to China) disputed Kazakhstan’s right to the medals they won, I was viciously trolled by a Kazakh Twitter user who recommended I should “drink a poison” before bombarding me with images of black sportswomen who had won gold for Great Britain. The less x-rated half of that exchange can be seen below. 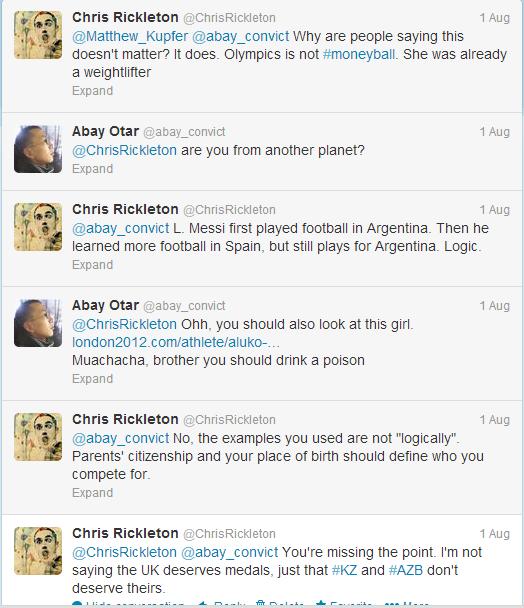 But @abay_convict missed my point. I wasn’t looking to conflate ethnicity, surname or appearance with citizenship. I was looking to say that while international tournaments are still tournaments in which countries compete, rather than the likes of Shell, J.P Morgan and Hyundai, there has to be some kind of line in the sand that dictates who can represent who, otherwise the whole thing turns into a stock market.

But where to draw the line? I would suggest that while Zlatan Ibrahimovic and Mo Farah fall on one side of it, David Tette and Zulfiya Chinshanlo (one of Kazakhstan’s gold medal winners) fall on the other. My argument is simple. Ibrahimovic was born in Sweden. He didn’t travel there for what Roy Hodgson would call “footballing reasons”. Mo Farah migrated to Britain to join up with his father, aged eight. He wasn’t headhunted as a future sporting star like David Tette or Zulfiya Chinshanlo. (Incidentally, there seems to be some confusion over whether Chinshanlo has now moved back to China or adopted Kazakhstan as her permanent home – See Eurasianet article entitled Kazakhstan and China Continue Olympian Tug of War for more information).

Moreover, Tette has not been rewarded with citizenship for his loyalty to the Kyrgyz state. Back in the summer of 2010, both he and Tago were painted in a rather unflattering light in Kyrgyz newsreels for trying to abdicate to Tajikistan. FC Vakhsh, then Tajik champions, had apparently offered them more money. The hiccup was that FC Dordoi (Dordoi Dynamo at the time) had not planned to sell either of them and were naturally disappointed in their behaviour. Take Peter Odemwingie’s botched move to QPR and then toss a bilateral relationship marked by border delineation disputes and restive ethnic enclaves, into the melee.

Their decision to ultimately stay put was, for Tette’s new-found countrymen in the stands, good news. Tette lights up a Kyrgyz league game with his pace and skill while Tago can hold a defensive line (given the standard of the opposition) on his own and in his sleep. Moreover, they make for fascinating case study in globalization, especially when considering that the club they play for is sponsored by Central Asia’s largest bazaar, responsible for a sizeable part of the trade which sees Kyrgyzstan re-export cheap Chinese consumer goods to richer markets in Kazakhstan and Russia.

But given that they were brought to the country – like those goods – as free-moving commodities with a certain value, their relationship with Kyrgyzstan remains dependent on the work they do for its foremost club. Clearly, finances dictate the patriotic pull of Kyrgyzstan. If their wished-for switch to FC Vakhsh had taken place, Tette might now be scoring decisive goals for Tajikistan against Kyrgyzstan. (Tago, as royalty, presumably retains his Ghanaian citizenship so as not to disinherit himself from the tribal throne, while Ghana’s own national football team, vastly superior to any side competing in the Asian Challenge Cup, probably misses neither).

Take the “Tette concept” to its hyperbolic conclusion:

The year is 2048 and unscrupulous football federations backed by the likes of China Petroleum Company, McDonalds and Gazprom scour the earth, searching for scarce resources in one-time pools of soccer talent like La Masia and the Wallsend boys’ club, offering large sums of money to impoverished parents saddled with their governments’ horrendous debts for “citizenship options” on their gifted children...

Watch Tette’s cute left footed finish in the final game of Group B between Kyrgyzstan and Tajikistan here.