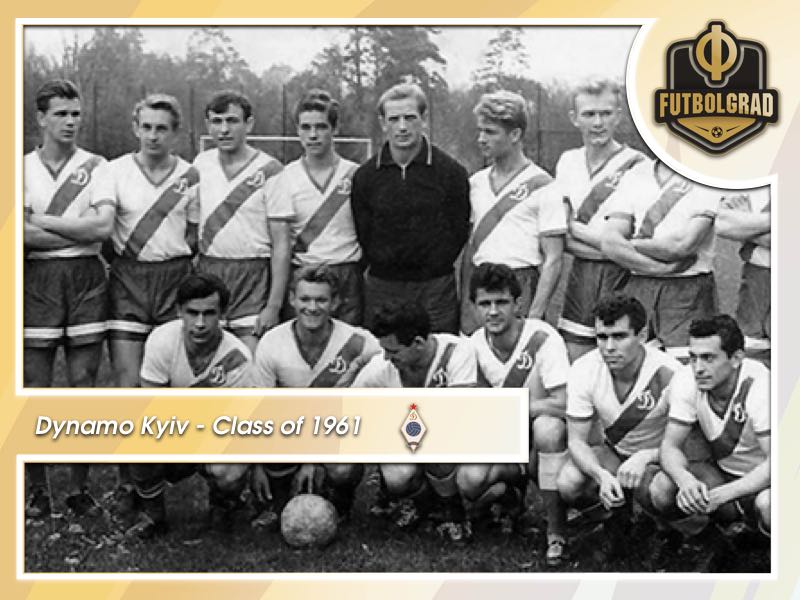 Dominated especially by Spartak and Dynamo Moscow in its initial stages, Russia and the city of Moscow had its grip on the Soviet Vysshaya Liga and was, therefore, a powerhouse in domestic football. Sharing a total of 22 trophies since the league’s inception, Dinamo, Spartak, CSKA, and Torpedo, were the pride of Moscow. However, this domination was about to change in the early 1960s with the emergence of Dynamo Kyiv.

It was in 1961 that would establish Dynamo Kyiv into an Eastern European powerhouse, as they became the first team from outside of Moscow to win the Soviet championship.

Managed by the Moscow born Vyacheslav Solovyov, a player who lifted the Soviet Vysshaya Liga on numerous occasions with CDSA Moscow, FC Dynamo Kyiv had the prospect of improving on their previous season where they finished as runner ups to Torpedo Moscow.

Featuring the legendary Valeriy Lobanovskyi during his playing career, the Kyivan club also had their own goalscoring weapon in Viktor Kanevskyi. Initially playing football as a hobby, Kanevskyi played for FC Mashynobudivnyk Kyiv, the predecessor of FC Arsenal Kyiv.

Working at the Kyiv Arsenal Factory as a child to support his family, Kanevskyi had the opportunity to play football and represent his factory with Mashynobudivnyk. However, football wasn’t the only sport of choice for Dynamo Kyiv’s future leading goal scorer in their history defining season.

Like many who establish a career in the game they adore, their passion for football starts as a child playing in the yard with friends. Not expecting anything of it, Kanevskyi truly embraced an all-encompassing sport lifestyle when possible. Performing at a good level in cross country, skating and volleyball, it would be via skating that Kanevskyi would truly find his love for football.

Informed by a friend that the famous Ukrainian coach, Mikhail Korsunsky, the first Ukrainian to receive the honorary sports title of Honoured Coach of the USSR, was recruiting, Kanevskyi had the opportunity to take a childhood hobby into a possible career.

Little did Kanevskyi know that this moment in his life would ignite a career spanning over 12 years. His breakthrough came in 1953 when he received an invitation to play for Dynamo Kyiv. Despite football fading into the background due to work, the coaches and staff at the Kyivan club saw something in the abilities of Kanevskyi.

Realising that policies needed to change at Dynamo Kyiv in order to progress and ultimately challenge for silverware, the club put their focus to towards local players who had the ability to provide a backbone and stability needed to develop further. With players such as Valeriy Lobanovskyi, Oleh Bazylevych, Valentyn Troyanovskyi, Andriy Biba, and Viktor Kanevksyi at the club, Dynamo Kyiv could build around the talent available.

However, it wasn’t all plain sailing for Kanevskyi. His first year at Dynamo saw a total of one appearance, resulting in the striker plying his craft one of the military teams that acted as a farm team of Dynamo Kyiv.

Scoring eight goals on one occasion, it was clear that the Ukrainian possessed the talent to take his club to the next level. Despite the disappointing start to his career and the threat of being sold by then head coach Oleg Oshenkov, Kanevskyi soon found himself returning to where he belonged, the Dynamo Kyiv first team.

Becoming captain six years into his career at the Kyivan club, Kanevskyi proved to his home country that anything was possible. From humble and difficult beginnings, working at the age of fifteen at the Arsenal Factory to support his family, the striker from Kyiv turned nothing into something.

A career that Kanevskyi himself didn’t expect, the Ukrainian would embark on a journey to silverware, ultimately creating history with Dynamo Kyiv in becoming the first club outside of Moscow to win the Soviet Top League.

With the 1961 season beckoning, Dynamo Kyiv were looking to improve on their previous season, one in which ended as Soviet Vysshaya Liga runners up, finishing three points behind Torpedo Moscow. Valeriy Lobanovskyi was the driving force behind Dynamo’s relatively successful season, scoring a total of twelve goals.

Two years into Vyacheslav Solovyov’s tenure at Dynamo Kyiv, everything was about to change. With forwards consisting of Valeriy Lobanovskyi, Oleh Bazylevych, and Viktor Kanevskyi, Solovyov had weapons at his disposal. Followed by Andriy Biba, one of Eastern Europe’s greatest attack midfielders, Dynamo Kyiv had some of Ukraine’s greatest players of that era.

Armed and dangerous, Dynamo Kyiv sought to do something no team outside of Moscow had done before; win the Soviet Top League. Competing against the previous champions, Torpedo Moscow wasn’t going to be an easy or straightforward task for Dynamo Kyiv, however. Gennadi Gusarov, the previous seasons joint top scorer, was dangerous in front of goal. Scoring 20 goals for Torpedo during the 1960 season, the Russian forward could transform his side into a Soviet domestic powerhouse.

Featuring in Group B of the Soviet Vysshaya Liga, Dynamo Kyiv had to contend with three teams from Moscow; CSKA, Spartak, and Dynamo. Finishing second in Group B, behind CSKA Moscow, Dynamo Kyiv scored the third most goals in round one, sitting behind Torpedo Moscow and CSKA Moscow. Defensively, the Ukrainian club was one of the best that season, at least in terms of goals conceded. Second to Avangard Kharkiv, the Kyivan’s only conceded nineteen goals in the initial stages.

On the path to glory, Solovyov and Dynamo Kyiv advanced to the championship play-off. With ten matches to win it all, it was no easy task for the Ukrainian club. Competing against the might of four Moscow teams, one of which were the reigning champions, Solovyov had to make sure his side were firing on all cylinders.

Glory is like no other, and for Dynamo Kyiv this was an opportunity of a lifetime. One in which they faltered at the final hurdle the previous year, it was now the time for the Kyivan club to seize on a prize which had never set foot outside of the Moscow dominance. With an opportunity ahead of them, destiny awaits.

Sitting third upon advancing to round two of the Soviet Top League, goal difference separating second and third, Solovyov put his side into fifth gear. Four points behind Torpedo Moscow, the reigning champions, Dynamo Kyiv strived for the best and nothing less. In the ten matches available in round two, the Ukrainian club didn’t lose a single game in the process. Winning six, drawing four, scoring seventeen, and conceding nine, Dynamo Kyiv won against the odds.

Moscow’s dominance was finally overcome. Dynamo Kyiv became the first Soviet Champions outside of the capital. An achievement like no other, the Ukrainian club started the journey that would define Ukrainian football for the years to come. Soon to become the Eastern European powerhouse, the team of 1961 cemented themselves as legends.

From Viktor Kanevskyi and his story of becoming a professional footballer to the might of players such as Valeriy Lobanovskyi, Oleh Bazylevych, and Andriy Biba, Dynamo Kyiv etched themselves into the history books for eternity.