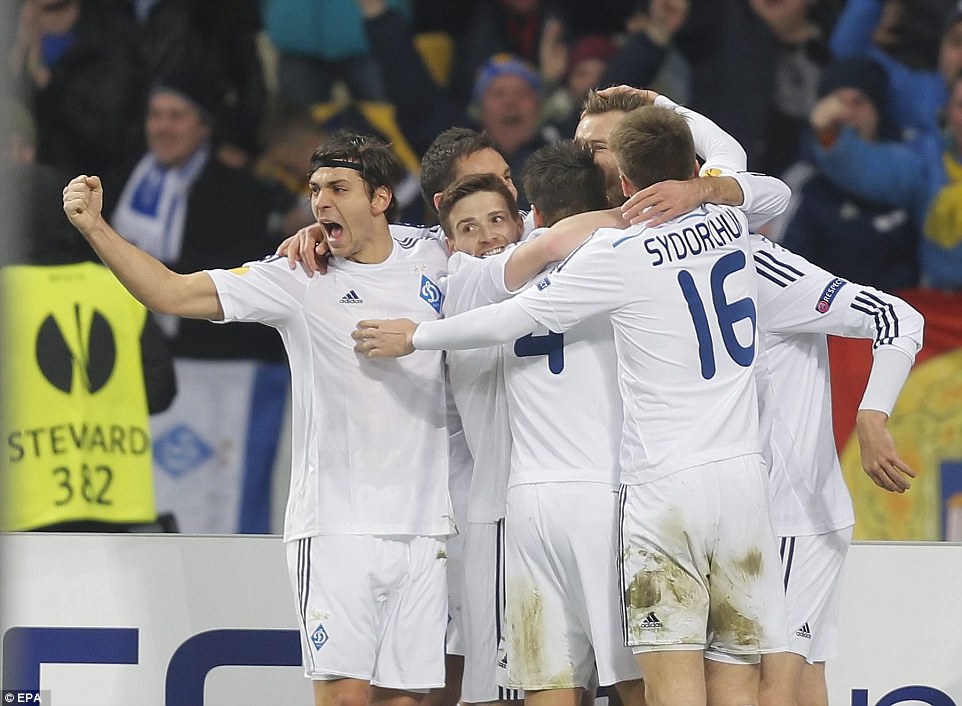 As the 2014/15 football season draws to a close Dynamo Kyiv fans can look forward to an exciting conclusion. On Thursday they will face the Italian club AFC Fiorentina in the return match of the Europa League quarterfinal, and on Sunday they will travel to Lviv to face their closest title rival Shakhtar Donetsk in the all-Ukrainian Derby.

These two matches could very well define the reminder of Dynamo’s season, as a victory against Fiorentina would see the club through to the Europa League semi-final, two games away from a potential final in Warsaw. But even more importantly, defeating Shakhtar on Sunday would see Dynamo move eight points clear from Shakhtar to the top of the Ukrainian Premier League table. With only five games remaining after this weekend the gap would surely be large enough for Dynamo to safely claim their first Ukrainian championship since 2009.

The club’s current progress in Europe and on the domestic front in many ways brings back memories of Dynamo’s last golden squad that narrowly missed out on going to the Champions League final in 1999. That particular team built by the legendary coach Valeriy Lobanovskyi included star players such as Andriy Shevchenko and was perhaps the most dazzling of Ukraine’s post-Soviet history.

It is perhaps fitting that Serhiy Rebrov, who was Shevchenko’s congenial striking partner in Dynamo’s 1999 edition, currently coaches Dynamo. Rebrov became coach in April 2014 taking over from Oleg Blokhin, whose coaching abilities seldom reflected his mythical status as one of the Soviet Union’s greatest players. Under Rebrov the club’s football improved immensely, and by the end of this week Dynamo could once again sit on the Ukrainian football throne.

The success of this season, however, has also meant that several Dynamo players have garnered interest from clubs in Europe’s top three leagues, namely Germany, Spain, and England. This week the Austrian defender Aleksandr Dragović was linked with several clubs from Germany’s Bundesliga including Bayer Leverkusen.

The clubs biggest star Andriy Yarmolenko, who was ranked fifth in the Futbolgrad Top 30 in 2014, has since risen to be perhaps the most dominant offensive player in the post-Soviet space, and has also been linked with a move abroad. Yarmolenko, who is often wrongly compared to Andriy Shevchenko, has been very open about the fact that he wants to join a club from a stronger league, and it appears that either Valencia or Chelsea will be the most likely candidates for his signature this summer.

Yarmolenko and Dragović are important cornerstones of the club, and with both of them likely leaving the club this summer, other players such as the Dutchman Jeremain Lens may move as well. The current political instability of the country may also make it difficult to hang on to the many foreign stars the club has acquired.

In many ways such an exodus would reflect the fate of the 1999 generation, as following the club’s successes at home and in Europe in the late 1990s and early 2000s, many star players including Shevchenko, Rebrov, and Kakha Kaladze left the club to play in Europe’s big leagues. At the same time Dynamo could use the cash injection that will come with these transfers to further strengthen their squad in order to set a foundation that could see them take back the Ukrainian championship and also see them to return to be Ukraine’s number one club in the long term.