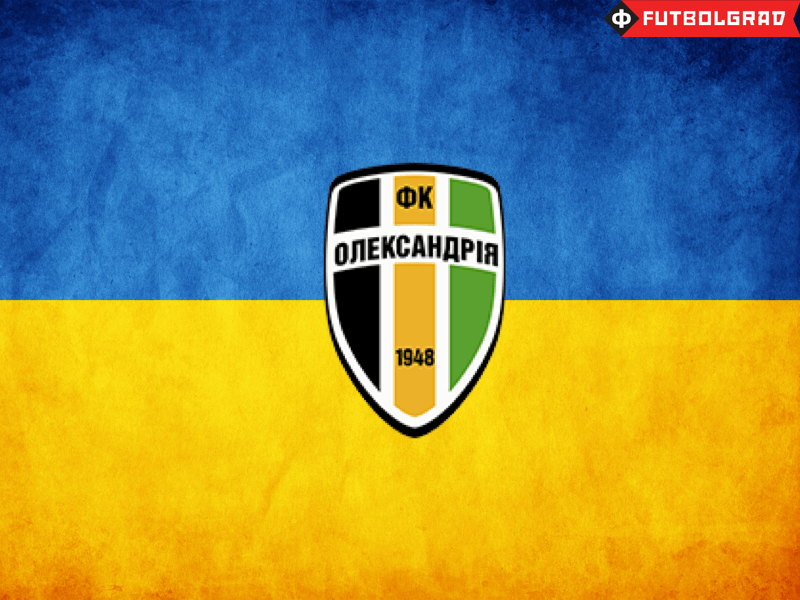 Wednesday evening witnessed one of the most unlikely results in the history of the Ukrainian Cup. Tiny FC Oleksandriya defeated giants Dynamo Kyiv 1-0 in front of a near capacity crowd at their 7,000 seat stadium to claim a 2-1 aggregate victory and book a place in the semifinals of the Ukrainian Cup.

Oleksandriya, who are a newly promoted side, are from a town of 70,000 people of the same name in the Kirovohrad region. Virtually unknown outside of Ukraine, they were overwhelming underdogs against the defending league and cup champions. But they achieved the unimaginable, and the reaction of the fans reveals just how much this result means to them and how shocking it was. 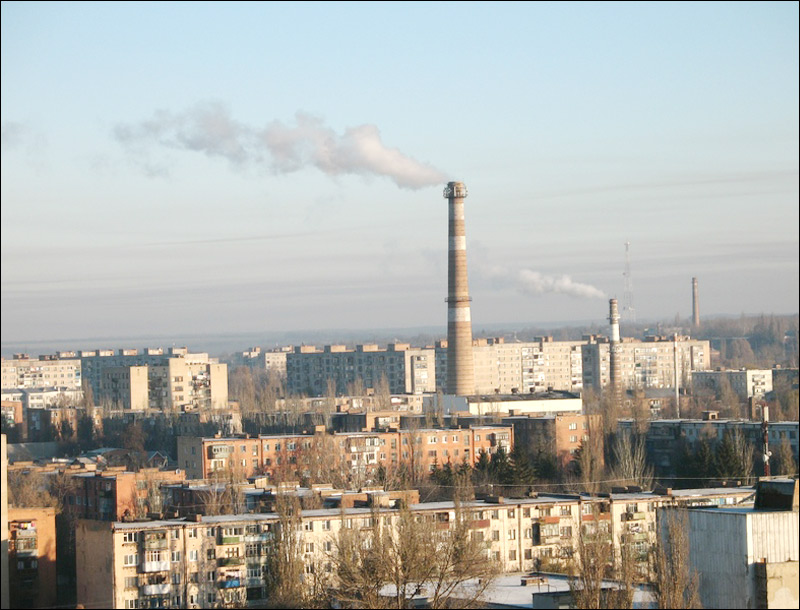 Oleksandriya is a relative nondescript town in the Kirovohrad Oblast – Image via ukrainetrek.com

For those unfamiliar with Ukrainian football—and for many of those who are—the immediate reaction was “who are Oleksandriya, where did they come from, and how is it that they not only knocked out Dynamo, but have climbed to sixth place in the Ukrainian Premier League?”

Like so many Eastern European clubs that do not form part of the elite, Oleksandriya’s history is marked by sporadic name changes, bankruptcies, withdrawals, and revivals. The club’s badge says 1948, but that date is deceptive. The club founded in that year was actually called Shakhtar, and although Oleksandriya’s official website traces their lineage back to that moment, their actual history began decades later.

The modern Oleksandriya were founded in 1990 as Polihrafteknika and were supported by the local polygraph machine factory. That same year the club entered the Kirovohrad regional championship of the Ukrainian SSR and won the competition in their very first season. As a result Polihrafteknika were granted entry into the inaugural edition of the First League, the second division of Ukrainian football, were they finished third in Group A. 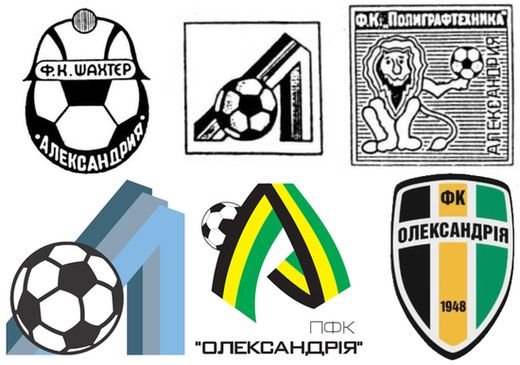 The various incarnations of what is today FC Oleksandriya – Image via ill.in.ua

Polihrafteknika spent the following nine seasons in the First League until finally earning promotion to the top division in 2001. For the next two seasons they barely avoided relegation, but in 2003 Polihrafteknika were forced to withdraw from the league due to financial difficulties.

By 2004 they rejoined the competition in the Second League under the new name PFC Oleksandriya and within two years were back in the First League. In 2011 the club once again gained promotion into the Premier League but finished last and were promptly relegated.

In 2014, PFC Oleksandriya merged with another club from the neighboring village of Holovkivka that was founded in 2008—FC UkrAhroKom—and the name was changed to the current version of FC Oleksandriya.

Immediately following the merger Oleksandriya won the First League and returned to the Premier League, where they got off to a rocky start. In their first seven matches they recorded only one victory—over the now-defunct Metalurh Zaporizhya—four defeats and two draws. But after a convincing 4-1 victory over Karpaty Lviv in the round 8, their results started to improve drastically. The only defeats that Oleksandriya have suffered since the Karpaty victory in late September have been against Dnipro, Shakhtar, and Dynamo. They went into the winter break with three straight victories and have picked up five points in four matches since the season resumed in March, with their sole defeat coming against Dynamo.

How is it that a club that was widely expected to be fighting for survival is in sixth place? Reinforcements have not played a major role. While six new players were signed in preparation for life in the top flight, but only two of these arrived from other Premier League clubs and have established themselves in the starting eleven. The bulk of the side has been made up of the same group of players that achieved promotion one year ago. 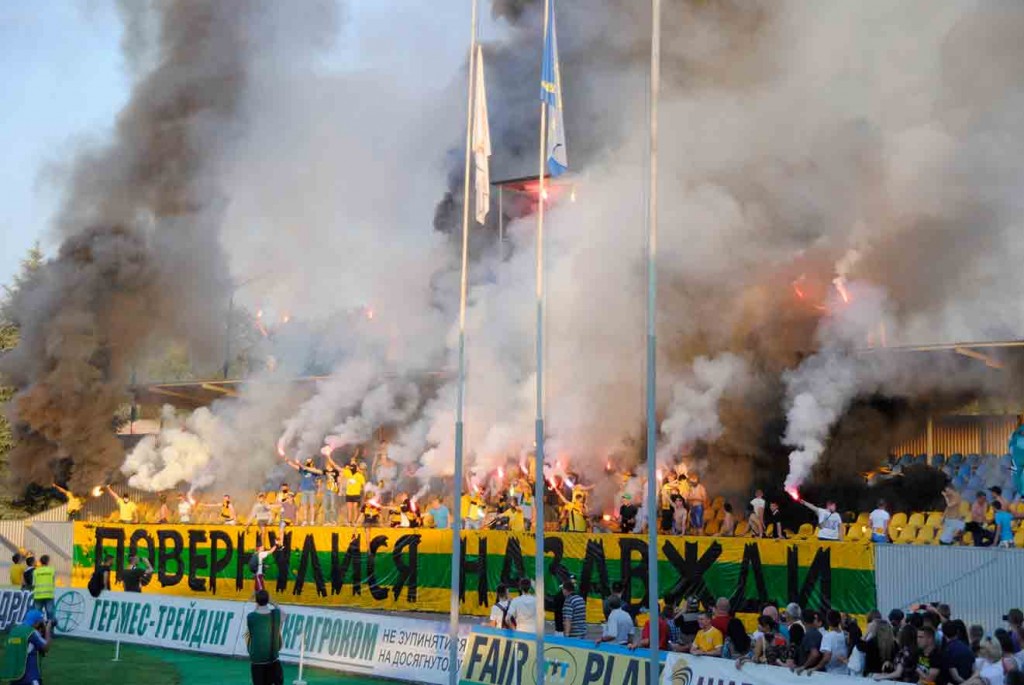 Oleksandriya fans had much to celebrate this season – Image via ucoz.ua

According to figures from Transfermarkt, the club’s players altogether have a market value of €8.28 million—only Hoverla Uzhhorod, Metalist Kharkiv, and Volyn Lutsk are worth less in the Ukrainian Premier League. Nevertheless, Oleksandriya have performed better than five clubs with more valuable squads.

A large part of Oleksandriya’s success can undoubtedly be attributed to their defense. Coach Volodymyr Sharan has built a highly organized, well-drilled unit, and the results are apparent: his side have conceded 23 goals in 20 matches, and twelve of these came against Dnipro, Shakhtar, and Dynamo. Without matches against the Big Three, their record is far more impressive: 8 goals conceded in 15 matches. Only the top four in the table—the Big Three and Zorya Luhansk—have better defensive records.

But another, equally important factor in Oleksandriya’s incredible campaign is organizational and financial stability.

Oleksandriya’s wage bill is low, but the fact that wages are even paid already puts them ahead of most of their competitors. “We don’t get paid a lot, but we get paid on time,” Sharan has commented.

Journalist Serhiy Dryha of Matchday jokingly referred to Oleksandriya as one of most boring clubs in the league: “There have not been any internal scandals, no fights between players, no hackneyed suspicion of involvement in match-fixing, no non-fulfillment of contractual obligations,” Dryha writes. “Volodymyr Sharan and his side are simply doing their job, and they can be proud of the outcome.”

Indeed they can, and they are confident that their success can continue. Having reached the semifinals of the Ukrainian Cup for the first time in their history, Oleksandriya have drawn the most difficult opposition: Shakhtar. But having already knocked out Dynamo, the players and manager have no fear going forward. “I understand that it will be difficult for us, but we won’t be whipping boys,” said captain Andriy Zaporozhan. “We will try to do everything possible and impossible to achieve a positive result and satisfy the fans who will come to support us.” 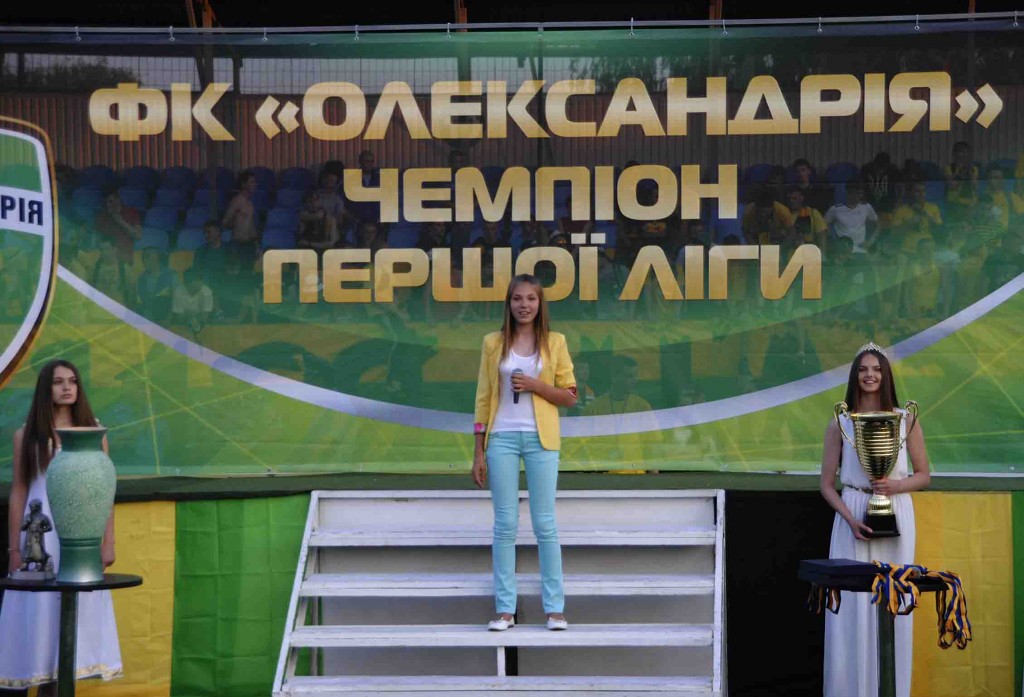 “I can say with confidence that against Shakhtar we will play just like against Dynamo,” added Sharan. “It won’t be an easy stroll for the miners. We can score against them, we have the experience, even playing with a man down.”

But Oleksandriya’s ambitions do not end with the Ukrainian Cup. With Dnipro banned from European competition, sixth place now guarantees a European spot. Oleksandriya’s five point advantage over seventh place Karpaty makes them firm favorites to hold on to a Europa League spot.

Sharan has downplayed talk of Europe, and has urged supporters and the media not go get ahead of themselves. But the desire is undeniable. “Participating in European competition is the dream of every coach and player,” the manager told Sport Arena, “and it does not matter in which round we will begin.”

There are very few reasons to be cheerful about Ukrainian football nowadays. Just about every team is struggling financially and the amount of clubs will decrease next season. The unlikely success of Oleksandriya has been a breath of fresh air in an otherwise miserable season, and their cup run and fight for a European spot is one of the brightest football stories to come out of Ukraine in years.