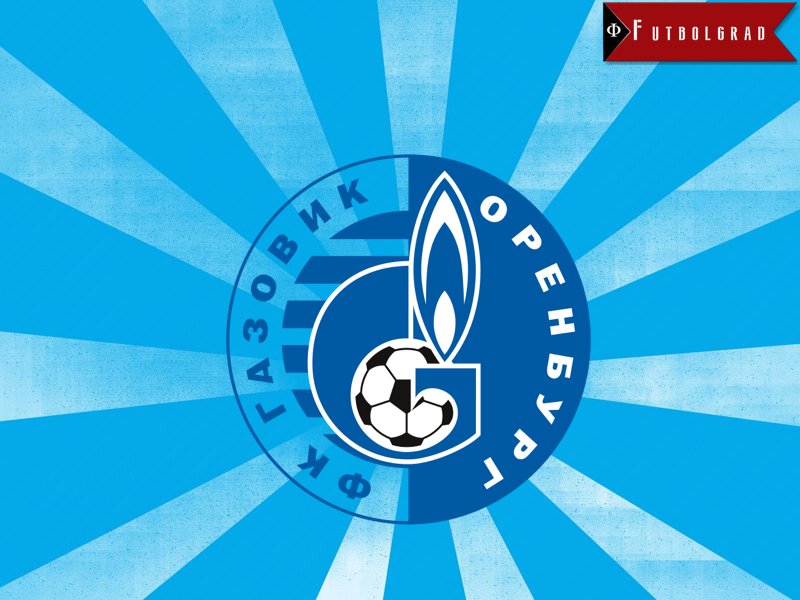 Just three years after residing in the third tier of Russian football, Gazovik Orenburg have managed promotion to the Russian Football Premier League (RFPL) after a comfortable campaign saw them crowned Football National League (FNL) champions. The Russian second tier is one of the most unpredictable and uncompromising leagues in the world— only weeks before the start of this season, it was still unclear exactly which, and how many, teams would take part—and yet Gazovik have managed to negotiate the choppy waters with remarkable efficiency.

How exactly have they done this? There is no obvious magic formula for dominating the Russian lower leagues, but the adoption of basic principles have set Gazovik on course for a historic debut in the top flight. High player turnover is an inevitable consequence of playing at this level, but over the winter break Gazovik only brought in two senior players, one of whom—Inal Getigezhev—was only on a four-match loan from Rubin Kazan. 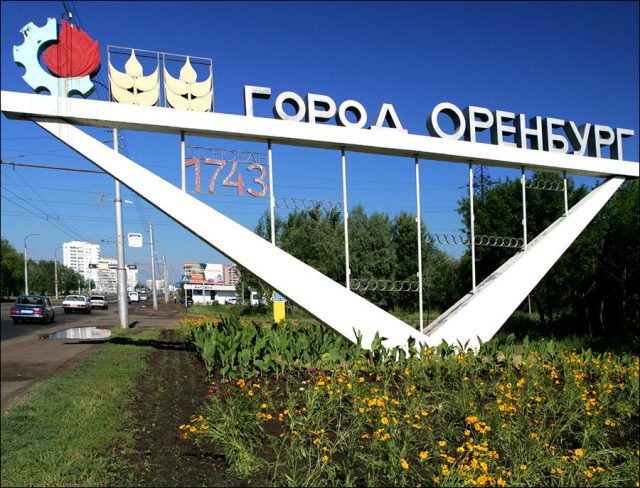 The city of Orenburg will host RFPL football for the first time in its history – Image via russiatrek.org

In fact, over the whole season which includes last summer’s transfer window, they have had the lowest rate of player transfers in the whole division. When comparing their nine incoming and nine outgoing transfers with Torpedo Armarvir’s eye-watering 80 total player turnover—or the league average of about 40—and you get an idea of how balanced Gazovik have been.

Transfer fees are a rarity for FNL clubs, and wages are often little more than €100 a week for average squad players, therefore to attract the best talent, and to persuade stars to stay is a real challenge. The exception was Anzhi Makhachkala, which blitzed through the division after their relegation from the top flight as they brought in players such as Yannick Bolli from Zorya Luhansk, who cost €600,000, and the former Paris Saint-Germain striker finished as the league’s top goalscorer on 15. The Ivorian has even managed eight goals in the RFPL despite his side looking set for an immediate return to the second tier.

Spending cash, however, is no guarantee of material success at this level. Torpedo Armarvir spent two thirds of the division’s entire expenditure last summer on Jean-Jacques Bougouhi alone, not to mention added 11 other Armenian-based players, thanks to billionaire Oleg Mkrtchyan‘s links to both the club and FC Ullisses Yerevan, while former Spartak Moscow head coach Valeriy Karpin was brought in as manager. Torpedo, however, have languished in the relegation zone for the entire season with the second-lowest goals tally, and subsequently have been relegated.

As Manuel Veth wrote a few months ago on Futbolgrad, Gazovik are backed by a subsidiary of the Gazprom empire, so will always receive criticism to some degree from rivals, but the fact remains that they have not spent transfer fees and salaries beyond their means. Farhod Vasiev, Anton Kobyalko, Sergey Breev, Vadim Afonin, Adessoye Adele, Dmitry Abakumov, Igor Koronov and Alexey Druzin have all played for the club in the last three seasons, while Dmitry Andreev, Vladimir Parnyakov, Kamalutdin Akhmedov and Vladimir Polyuakhtov have played for Gazovik even longer. This stability has allowed them to build a familiarity with each other that has given them a distinct advantage over their divisional rivals.

One new recruit has shown that an eye for fresh talent is just as crucial as keeping a group together over a longer time. 18 months ago, FC Tyumen spent almost three months chasing Artem Delkin before he evetually signed at the end of the winter transfer window on loan from Krylia Sovetov Samara, but he only managed three goals as he struggled to establish himself. Last summer his contract with Krylia Sovetov, who won promotion from the FNL under Frank Vercauteren ahead of Anzhi Makhachkala, ran out, and Gazovik snapped him up. He raced to the top of the scoring charts with 16 goals by the end of November, and despite barely playing a minute since the winter break is still joint top of the list alongside his former skipper at Tyumen, Khasan Mamtov. 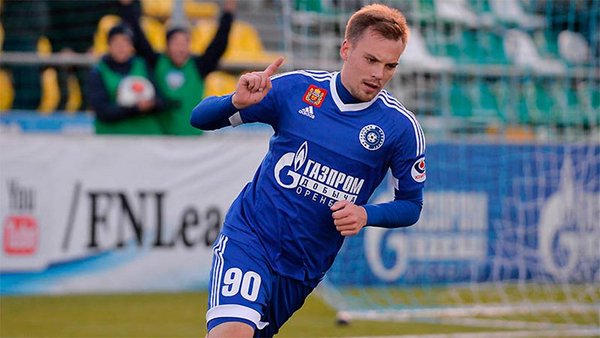 Delkin is a former Russia under-21 international who showed promise, but has so far not been able to fulfill his potential. Other than his 14-goal season with Torpedo Vladimir in the extended 2011-2012 season—Russia moved from a spring to fall to a fall to spring schedule—he had managed only nine professional goals and completed just 14 matches before his loan spell in Tyumen.

His style of play is not conducive to all teams; a slight figure, he is not a target man who can hold up the ball, but relies on having quick support players and accurate passers to feed him opportunities. His pace is one of the main attributes that makes him a danger along with his finishing ability, and although he has some fleeting experience in the top flight with Krylia Sovetov, earning promotion as a key member of a resurgent team will do his confidence a world of good.

It would be wrong to talk of Delkin without also highlighting his supporting cast. Khyzyr Appaev is the man who usually comes on as Gazovik’s first choice striker, and offers a very different option. He is a much more imposing physical presence and has a more tenacious approach, something that has proven crucial to lighten the burden on his midfield by pressing high. He was brought off the bench 23 times, the same number as Delkin has been substituted, while his return of seven goals in just ten starts is a impressive.

Another important member has been Igor Koronov. Last season, Igor Koronov was runner up to Bolli in the scoring charts with 14 goals, and although he has played significantly less this season he remains a dangerous threat from the right wing with his pace.

The defence has been settled for some time now, marshalled by the 35-year-old Andreev, and has conceded a mere 20 goals in 37 matches. As I mentioned before, continuity has been one of the key reasons for Gazovik’s success, and although the ages of Andreev, and his defensive partner Ade will be a concern in the long term, they have provided the experienced foundation for a championship winning season. 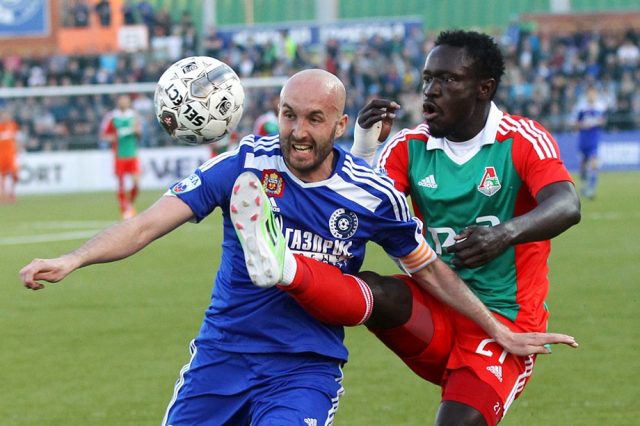 In front of the backline is the hugely impressive Vadim Afonin. The Uzbek international midfielder is one of the FNL’s best-kept secrets, although it has taken him a while to reach this level in Russia.

After a season with Traktor Tashkent, he moved to Rubin Kazan II as a teenager but returned home after three years, and only came back to Russia when he moved to Salyut Belgorod three seasons ago. His presence and his ability to shield the defence is immense, and although he usually operates as a single holding midfielder he has the vision to also play quick passes wide to his more mobile teammates.

Two consecutive 5th place finishes in the FNL have seen Gazovik agonisingly miss out on the playoffs by one place, but now they have fulfilled their potential by dominating the league. There are some questions that will need to be answered before they embark on their maiden Russian Football Premier League voyage though, chief of which is how they will recruit for next season.

The consistency that has been key to their success will not be enough by itself to keep them afloat, and the first area they will need to strengthen will be their defence. Andreev and Adewole will not be able to play every week and keep out the likes of Zenit Saint Petersburg striker Hulk, Spartak Moscow striker Quincy Promes and CSKA Moscow striker Ahmed Musa. 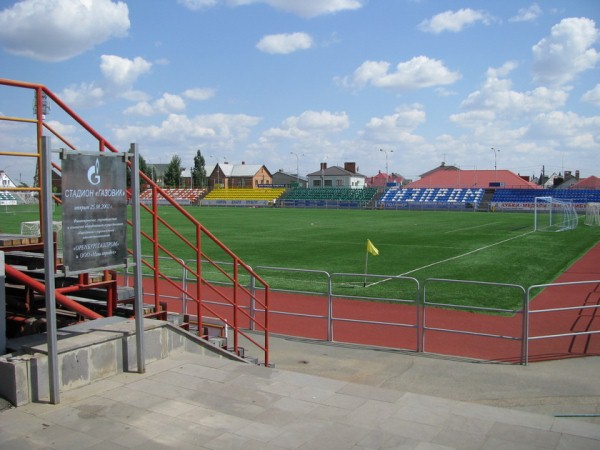 Their stadium is another issue. Stadion Gazovik only holds 4,800 spectators which is officially below RFPL requirements, despite an expansion just two seasons ago. Ufa and Samara are the nearest cities with Premier League teams, both of which have hosted others sides needing a temporary home, but it is unconfirmed whether special dispensation will be granted for them to play at the home stadium until they manage to expand it.

With their wealthy owners, they shouldn’t be in danger of running low on cash, but with player recruitment essential for survival, the last thing the club will need is to divert funds for reconstruction rather than personnel. With a short summer break the pressure is on for the RFPL’s newest member to prepare for a baptism of fire, but it would take a bold man to bet against them coping with life in the fast lane.