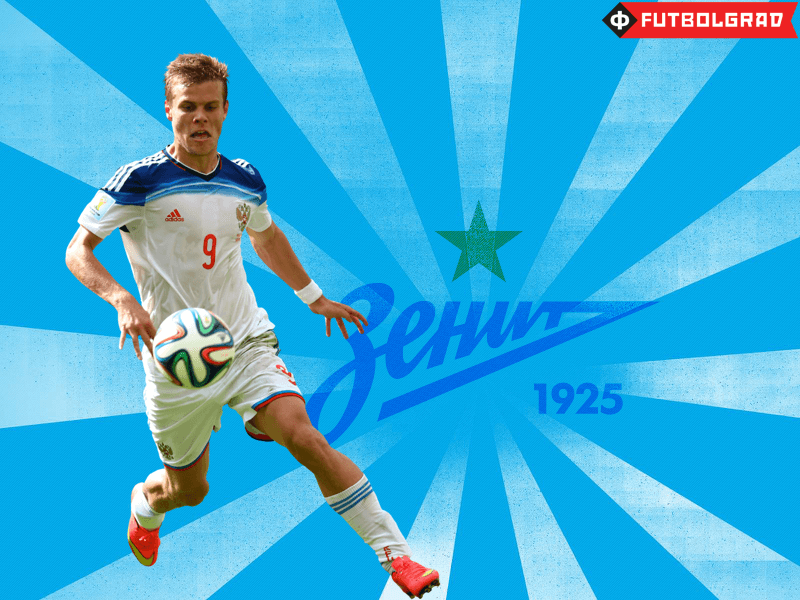 Kokorin – Time to Succeed at Zenit

Amongst Russian football fans, you will find many who think Zenit Saint Petersburg’s signing of Dinamo Moscow forward Aleksandr Kokorin is a bad idea. Others will shrug their shoulders and say he still has a lot to prove, given his €3.5 million yearly wage and €2 million sign-on fee, both of which are fair to the extent that most fans agree Kokorin is one of the most naturally talented Russian players of the current generation.

Furthermore, Zenit seems to be a good career move for the player. The massive salary aside the move should also help his career on the pitch. At Dinamo Moscow he had begun to coast, knowing the foreign player limit and his reputation guaranteed him ample playing time, but he will have to work harder at Zenit due to stiff competition for the center forward position from Artyom Dzyuba and, to a lesser extent, Hulk (whose preferred position is on the right side of attack). This alone may be enough to see him finally fulfill his potential.

Another club rumored to be interested in Kokorin was Arsenal—though the wages there would also have been handsome—Russia’s 13% tax rate means that Arsenal could never compete with Zenit when it came to the salary after tax. In terms of competition it is possible that the heightened competition at an English top club would have meant Kokorin struggling to get time on the pitch.

Zenit, on the other hand, will mean no time needed to adapt to new conditions, and Kokorin will be mindful of Zenit’s recent track record of developing talented players. The club got more out of Roman Shirokov than any other club has managed, and have also made a huge difference to Dzyuba. Prior to joining Zenit, Dzyuba spent two lengthy periods on loan from Spartak Moscow at (then) relegation candidates FC Rostov, but this season he has scored six goals in the Champions League, where Zenit topped their group.

In fact Kokorin’s relationship with Dzyuba will be crucial. In a recent Sport-Express interview, Dzyuba said that he would be in favour of him joining Zenit, though pointed out that they have “differing views on some things in life—maybe our aims.” Kokorin is a regular user of social networks, and in the past has used Instagram to flash his expensive purchases—something that hasn’t gone down well with Dzyuba. “That he sometimes gets sent up is partly his own fault…I’ve told him more than once about the photos on social networks…Sasha [Kokorin] is a very good person and a strong footballer. He just needs to show all his potential.”

At a club with a history of discord, the relationship between Kokorin and Dzyuba will be crucial if the dressing room isn’t to be split into rival factions once again. Although André Villas-Boas may be able to accommodate both players in his starting line-up, both prefer playing as centre forward. Dzyuba’s jovial persona is tempered with a tendency to say what he’s thinking, and fell out with some of those around him at Spartak Moscow (hence the years in the wilderness at Rostov). Hopefully Kokorin won’t be next.

For Zenit, however, Kokorin is undoubtedly a good signing. Whether or not he becomes an excellent signing will depend on whether Kokorin is willing to adapt to the work ethic required to succeed at Russia’s most powerful club.