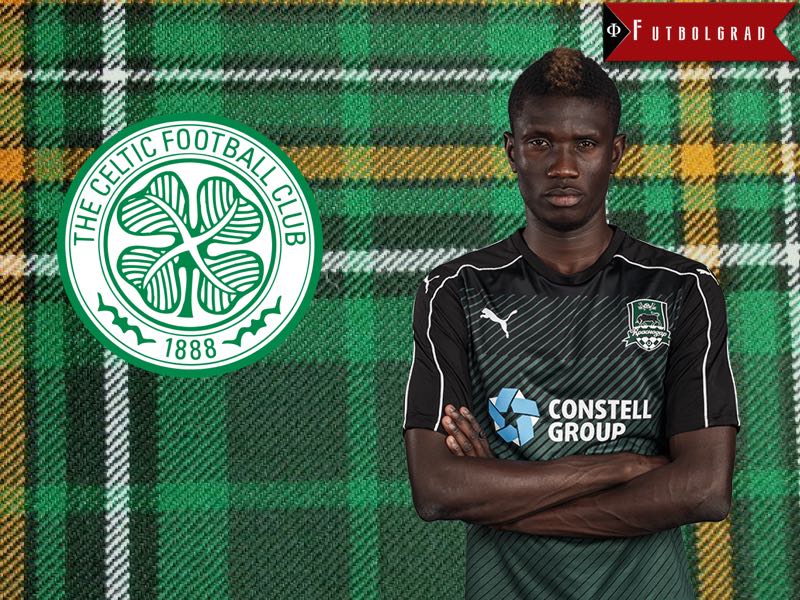 Kouassi Eboue from Krasnodar is on his way to Scottish giants Celtic Glasgow. The 19-year-old Ivorian defensive midfielder is one of the brightest talents of the Russian Football Premier League.

Bought by Krasnodar for €50,000 from the Armenian club Shirak Gyumri in the summer of 2014, Krasnodar will feel that they have done well to receive €3 million from Celtic.

Eboue has had a strong first half in the Russian Football Premier League, he played in nine of Krasnodar’s 17 games, as well in the Europa League where he played in all six group stage matches. But Eboue struggled to make the first squad towards the end of the year, as he missed three out of the last four games before the winter break.

Kouassi Eboue, in fact, received more playing time than expected in the first half, mostly because Odil Ahmedov had to play out of position as a right-winger, rather than as a defensive midfielder. With several players returning from injury Eboue saw his playing time diminish.

Another problem for Kouassi Eboue was the fact that the Russian Football Premier League has a stringent foreign limitation rule, which forces clubs to play at least five players, who are eligible for the Russian national team, at any given time. Eboue, when playing, occupies one of the six foreign spots in the squad.

This, perhaps, was one of the biggest reasons to let Eboue leave the club in the winter transfer window. Another major reason could be the fact that the club is receiving a relatively large transfer fee for a player who was signed for very little money two years ago.

As discussed on the latest Futbolgrad Podcast, Krasnodar’s squad has an average age of 28. Furthermore, with the club 12 points behind league leaders Spartak Moscow, Krasnodar’s management may have decided that it is now time to rebuild the team.

While teams in Western Europe make only small adjustments during the winter transfer window, Russian teams usually use the three month long winter break to conduct most of their transfer business. This is especially evident at Krasnodar, who have already shipped out Odil Ahmedov, for €7 million to Shanghai SIPG, and Artur Jedrzejczyk, for €1 million to Legia Warsaw.

Also, star striker Fedor Smolov, who is linked with a €15 million move to Borussia Dortmund, could also leave in the winter. These funds would provide the club with a significant war chest with which to rebuild the squad. Altogether Krasnodar could have €26 million—Krasnodar is under Financial Fair Play investigation, which means they are only allowed to spend money they previously received through transfers—available to balance the squad at key positions and also to lower the average age of the team.

Considering that Krasnodar want to get younger, it seems odd that the club would want to sell Eboue this winter, especially considering that the Ivorian had a strong season in the Europa League. But Krasnodar have several players, who can play the position—Charles Kaboré, Mauricio Pereyra, Marat Izmailov, Yuri Gazinsky, Dmitri Torbinsky, and Pavel Mamaev, could all play on Eboue’s position.

Krasnodar are strong at the centre of the park

In fact, the centre of the park might be Krasnodar’s strongest position, and with the money received, Krasnodar could now look to bring in a winger, as well as a younger defender—Krasnodar’s defenders have an average age of 30.

Hence, what we are seeing at Krasnodar now is the early stage of a rebuild, and it would not be surprising if that rebuild includes several players from Krasnodar’s prolific youth academy. In fact, the owner, Sergey Galitskiy, has always been adamant that the club, which he founded in 2008 would, at some point, have to rely on producing youth players, as he reportedly despises spending big money on players.

For Eboue, on the other hand, this is an interesting move. The Scottish Premiership has fallen significantly behind the Russian Football Premier League in recent years. Celtic, however, frequently play in the group stage of the UEFA Champions League, and the club has increasingly developed a reputation for producing talented footballers for the neighbouring English Premier League.

Celtic’s current squad includes the highly talented Moussa Dembélé, and the Croatian defender Jozo Simunović. Brendan Rodgers has also debuted the 13-year-old Karamoko Dembele this season. Eboue can, therefore, expect to join a club where he will be given the time to develop as a top class defensive midfielder.

Kouassi Eboue could be a star in the making for Celtic

Celtic, on the other hand, will receive a player, who can easily develop into the sort of player who can command a massive transfer fee in a few years time. At 185cm Eboue brings the right kind of physical attributes to succeed in the Scottish game, while at the same time also displaying technical abilities that will make him a joy to watch on the pitch. He is also a great ball distributor, which means that he could be capable of playing as a deep lying playmaker.

Before he gets there though, Eboue will have to work on his consistency, and his discipline. In a 3-3 tie against FC Orenburg on matchday 16, for example, Eboue received a needless red cad after his club gave away a 2-0 lead. This episode in particular, highlighted that the Ivorian can lose his head when his team comes under pressure.

Eboue is, in other words, a diamond in the rough, but if Rodgers finds the right way to develop the player, the deal could become the sort of transfer that would benefit all sides involved. Eboue gets a big money move to a highly reputable club, Krasnodar receive money that they can use to rebuild the club, and Celtic receive a player who can be developed into a top class competitor.