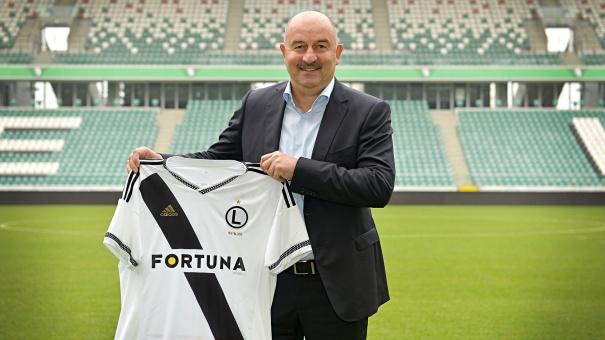 Dinamo Moscow’s former head coach Stanislav Cherchesov has signed a contract with the Polish Ekstraklasa club Legia Warsaw. Cherchesov’s time at Dinamo was ended abruptly this summer after Dinamo was banned from the UEFA Europa League for breaching Financial Fair Play regulations and a dispute arose between the coach and the board over future financial investments.

Right after UEFA’s penalty, club President Boris Rotenberg had announced that wages and transfer costs would have to be reduced, although the club had already lined up two big new signings—French midfielder Yann M’Villa, who had started training with Dinamo in the spring, and Rostov defender Vitaliy Dyakov, who had completed the pre-season with the club. When the board told Cherchesov that there was no money for their wages the conversation evidently became heated, and ultimately let to Cherchesov’s dismissal.

Now Cherchesov has decamped from Russia’s former Police club Dinamo Moscow to Poland’s former army club, a transfer that might very well incur political controversy. Legia, as one Polish based journalist explained to me, was established in 1916 while the Legions were fighting against Russia. Even during the time of communism Legia fans were known as extremely patriotic and right wing.

Today, Legia’s major fan group, known as the Żyleta (Razor)—they are named after the stand that they occupy in the Polish Army Stadium—are commonly thought to be the most fanatical fans in Polish football. In addition, my source explained, they also hold strong anti-Russian sentiments. Furthermore, as @Pavelfare pointed out to me on Twitter, Legia fans are known, not only for their sentiments against Russians but also for their strong feelings toward their Eastern neighbors in general.

This is further highlighted in Christopher Lash’s article on rightbankwarsaw.com “Legia Warsaw, Ultras and the Lost Polish East”, in which he describes Legia’s Europa League match against Metalist Kharkiv that took place last October in Kyiv. At the match Legia fans unveiled a banner (which can be seen here) with the Polish names and crests of Lviv and Vilnius.

The main question asked by the FARE representative @Pavelfare was, therefore, whether the appointment of the Russian Cherchesov by Legia could spark discontent within Legia’s fan base, or if this appointment could actually positively influence the strong Russophobic tendencies of Legia’s Żyleta.

The Polish football journalist Ryan Hubbard certainly thinks so, as “there is actually generally quite a positive reaction to his impending appointment. Fans like that he’ll be authoritative”. Hubbard added, “[former coach] Henning Berg tended to defend his players a lot when they had performed badly, which would usually irk supporters.”

When it comes to discipline, Cherchesov could certainly be the right man for the Legia job. Cherchesov had several clashes with players in the last few years, including one high profile incident, with the Russian international midfielder Igor Denisov. After Denisov criticized Cherchesov’s match tactics and called him a clown, Cherchesov responded by fining, suspending, and transfer listing Denisov. Despite the fact that Cherchesov is Russian, his harsh managing style has already earned Cherchesov a few admirers amongst the hardcore Legia supporters.

In fact, Hubbard pointed out that the only thing that can be criticized in the appointment was the manner in which the board conducted itself during the negotiations: “I liken the situation that occurred yesterday to a woman cheating on her husband. Legia waited for Berg (and the team) to head off to the game in Zabrze [against Górnik], and then while he was gone, invited Cherchesov to Warsaw [for negotiations].”

Hence, while Legia’s board can be accused of unfair conduct toward their former coach, most fans of the club feel positive anticipation prior to Cherchesov’s arrival. The other side of this situation is that it will be interesting to see how the Żyleta will instrumentalize Cherchesov’s nationality, if he fails to produce positive results for the club.