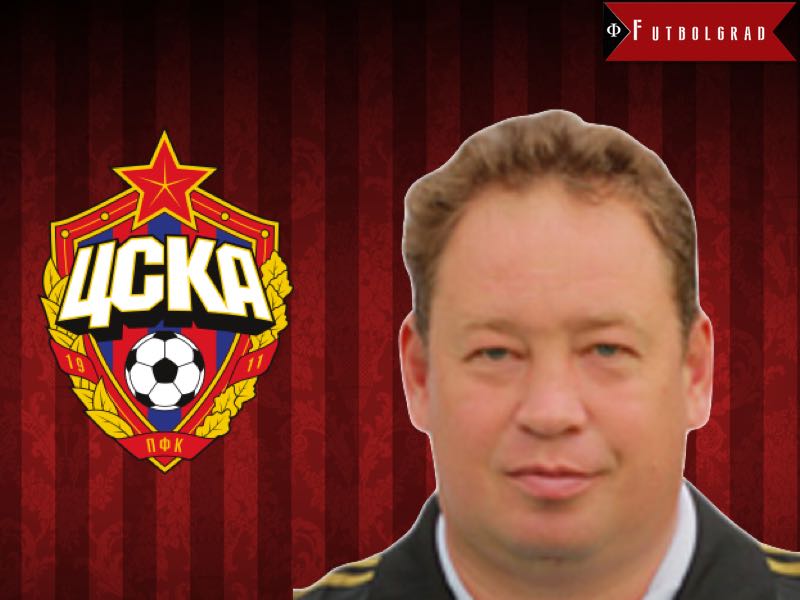 It was not a fairy tale ending for Leonid Slutsky at Wembley, as CSKA Moscow was defeated 3-1 by Tottenham Hotspur. The result means that CSKA finished Group E in fourth place, and therefore will not join FC Rostov, Zenit, and Krasnodar in the round of 32 of the UEFA Europa League in the spring.

The day before the game, Slutsky had released an official club statement in which he confirmed, what at this point had been the worst kept secret in Russian football, that he would step down as the head coach of CSKA Moscow.

In seven years with CSKA, Slutsky won three Russian Football Premier League titles, including last season, two Russian Cups, and two Russian Super Cups. He has also managed CSKA Moscow on over 300 occasions, and was perhaps the architect of what can, in retrospect, only be described as a golden era on a national level.

Internationally, however, Slutsky failed to establish CSKA Moscow as a proper contender. The 2010-11 season was the last time CSKA Moscow managed to qualify out of the group stage of the Champions League, when they finished second behind Inter Milan, but were then eliminated by Real Madrid in the round of 16.

Their best finish in Europe was in Slutsky’s maiden European season, as they reached the quarterfinal of the 2009-10 UEFA Champions League where the club was eliminated by Inter Milan.

Those two sides from 2009-10, and 2010-11 also, in some ways, represented the pinnacle of talent in CSKA Moscow’s side. Players like the Berezutski twins, Sergei Ignashevich, Miloš Krasić, Vagner Love, Zoran Tošić, Keisuke Honda, where among the names that formed a formidable team that was hard to beat both in Russia, and also abroad.

Those core players were later complimented by the likes of Seydou Doumbia, and Ahmed Musa in 2011. But, at some point, Slutsky seemed incapable of developing the squad further, as he did not integrate young players, or manage to bring further talent from abroad.

Slutsky could not adapt to changing economics at the club

Some of it was down to economics—the Russian economy slowed down and then came to a standstill, CSKA was no longer able to invest in foreign stars, which prompted owner Evgenii Giner to focus on young talented players from the academy instead. But Aleksandr Golovin, and more recently Fedor Chalov aside, Slutsky seemed reluctant to give academy players an extended run in the first squad.

Hence, when the foreign star players left, Slutsky relied heavily on the talented core of the team. The problem, however, was that the core of the squad was aging.

Some of this was already evident last season, but CSKA were lucky that their traditional opponents in the Russian Football Premier League were all experiencing difficult seasons as well, which meant that CSKA could scrape by and secure the title on the last day of the season, ahead of surprise package Rostov.

CSKA, in fact, often appeared tired, and maybe that was somewhat down to the fact that Slutsky was playing an exhausting double role in that he was coaching the national team, and CSKA at the same time.

Slutsky did remarkably well to get Russia to the tournament in France last summer, but then Russia deflated, and those who saw the manager speak to the press noticed that Slutsky seemed exhausted. Apparently, it was right after the tournament that Slutsky brought up the possibility of resigning at the club for the first time.

The bosses at CSKA, however, convinced him to stay on. Then in the fall, Slutsky was attacked for his Jewish roots, and appearance in a video for the Jewish cultural centre in Moscow. Several incidents involving CSKA fans, and opposition fans, as well as banners at the main-Moscow Derby, Spartak vs CSKA, that attacked his Jewish origin, and the fact that CSKA lost the game, once again prompted Slutsky to ask his bosses to let him go.

Once again the bosses convinced him to stay but, at this point, the writing was on the wall and, just ahead of matchday 16, the news broke that the game against Tottenham would be his last. CSKA won their matchay 16 game against Orenburg (2-0), and then followed that up with a 2-0 victory over FC Ural.

In some ways the squad seemed to be almost relieved that the episode was finally behind them, and that Slutsky had made room for a new beginning at the club. Finally, on Tuesday, after the club had departed to England, the club made Slutsky’s resignation official.

On the Futbolgrad Podcast, Andrew Flint and I discussed whether this was the perfect time to make it official. After all, his squad could give Slutsky the perfect send off by qualifying for the round of 32 of the Europa League.

The table, in many ways, was set for a glorious send off when Alan Dzagoev scored early for CSKA. But Tottenham turned the match around, as Dele Alli, Harry Kane, and an own goal by Igor Akinfeev meant that Tottenham, and not CSKA, would finish third in the group. 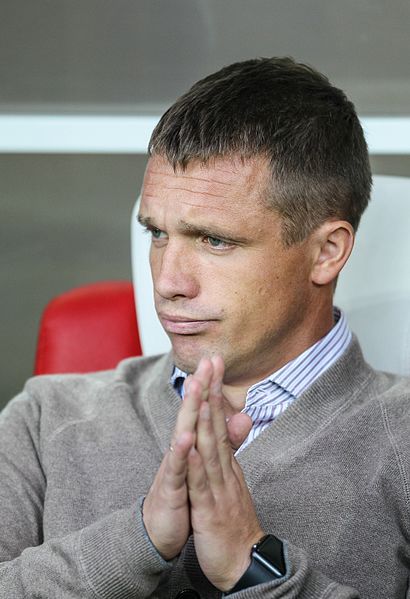 Viktor Goncharenko is likely to take over from Slutsky during the winter break – Image by Viktor Sadovnikov CC-BY-SA-3.0

Slutsky’s likely successor will be the current FC Ufa head coach Viktor Goncharenko, who was Slutsky’s assistant coach last season. CSKA are now out of Europe, and effectively out of the title race in the RFPL as well—they are eight points behind league leaders Spartak.

The Belarusian Goncharenko has shown at BATE Borisov that he is a highly talented coach, as he won the Belarusian title on five occasions, and also guided BATE to a surprise victory over Bayern München. His track record in Russia, however, has been patchy at best, as he had difficulties at both Kuban Krasnodar, and FC Ural—where he left after a match fixing scandal.

His current side, FC Ufa, however, are in eighth place, and are within three points of a Europa League spot. The club’s performances indeed highlight that the 39-year-old has finally understood what it takes to coach at Russia’s top level.

CSKA Moscow have recently moved to a wonderful new stadium, and their UEFA Youth League side managed win their group against the likes of Tottenham, Bayer, and Monaco. CSKA, therefore, has the right building blocks for a bright future, and it will be up to Goncharenko to put those blocks in place to rebuild CSKA.

Slutsky in the meantime is strongly linked with a coaching job at Vitesse Arnhem in the Netherlands. It will be interesting to see whether Slutsky does indeed move abroad or if he takes six months off in order to recuperate.