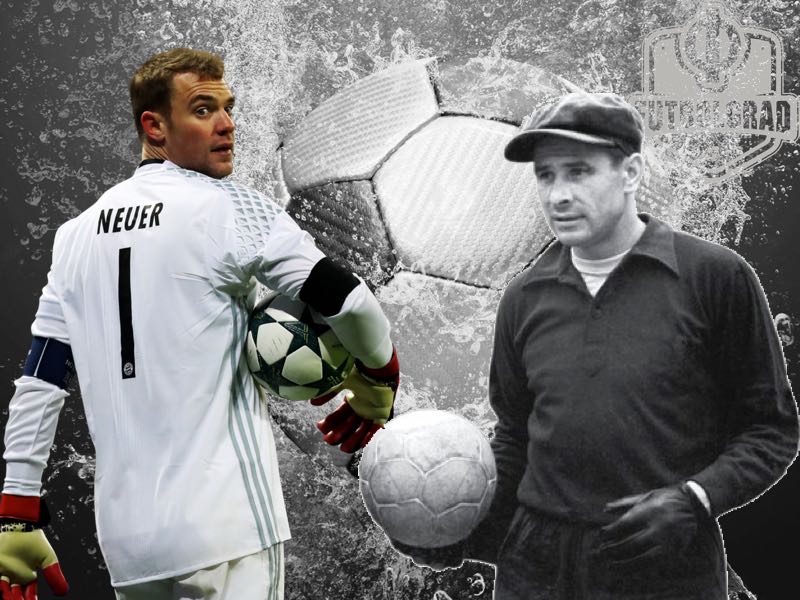 The big question on this week’s Futbolgrad Podcast was in particular on Lev Yashin and whether it is possible to compare him with a modern goalkeeper like Manuel Neuer, and in general on whether players from different ages should be compared at all. I put this question to my Twitter followers in a poll where an overwhelming 68% voted that players are not comparable throughout the ages.

Question for the @FutbolgradLive Podcast. How do you rank players from the past, like Lev Yashin, with modern players like Manuel Neuer? Are they even comparable? Answer below and send us in some thoughts!

Not everyone agreed with the consensus, however. James Nalton from the World Football Index, for example, wrote: “They have to be comparable I think. For all you could say shots are quicker now, balls were heavier then, making them more difficult to save. Some players could still get a lot of power on their shots, even then.”

Nalton further explained: “I think you have to take into account the changes when comparing them, including in the rules, pitches, and equipment etc, but I think you can still compare 1900s players to 2000s players. It’s still association football.”

Other, however, are not so sure. Twitter user Charles Ducksbury points out: “I don’t think Yashin would get near the speed of shots in the modern game, yet Neuer probably couldn’t deal with the ‘assaults’ on [goalkeepers].” Ducksbury further added: “[It is a] different game completely. Watched a video of Di Stefano last week and it was just so slow.”

How to compare Manuel Neuer with Lev Yashin?

Where do I stand then in this great debate? I feel that there were many valid points send in and I have always looked at football as a form of progression. At the same time truly, innovation seldom happen in the game. Gegenpressing is just another form of fore-checking, and the three-man defence that is now coming back into fashion has existed before as well.

The sweeper keeper as Manuel Neuer is embodying it right now is not exactly new either. Soviet keeper Lev Yashin was known for roaming and innovated the game in his right. Like it is the case today with Neuer there was also a real hype around the goalkeeping position when he dazzled the world with his saves during the 1966 World Cup.

His flying saves and the fact that Yashin would quickly release the ball with his hands were entirely new for many football fans at the time. As was his control of the box with him often storming out of the six-yard box to make incredible catches at times—something that was entirely new at the time. Yashin also was the first goalkeeper to shout commands at his defenders and, like Manuel Neuer, rush out to meet attacking players in one-on-one situations.

Known as the Black Spider around the world Yashin, however, was also known for making mistakes in crucial games. After winning the European Championships with the Soviet Union in 1960, he made a critical mistake at the 1962 World Cup in the group stage match against Colombia where he allowed Marcos Coll to score directly from a corner kick. Yashin re-established his credentials at the 1966 World Cup where the Soviet Union finished fourth. 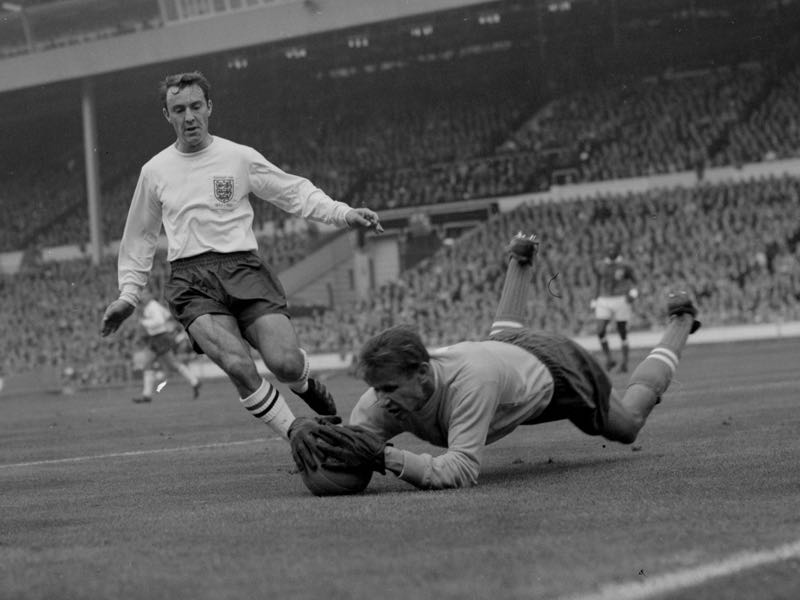 Hence, while Yashin has won a European Championship, he did not manage to lead his country to a World Cup as Manuel Neuer did in 2014. That said Yashin won the Ballon d’Or in 1963, which is something Manuel Neuer failed to achieve—although some argue he should have won it in 2014—and even more importantly became the namesake of the Lev Yashin for the best goalkeeper at the World Cup finals—a trophy Manuel Neuer won at the 2014 FIFA World Cup.

So how do we compare the two? Perhaps that is not the point of that argument at all? Instead, would it be better to point out that Manuel Neuer would not exist without Yashin becoming a trailblazer on the goalkeeping position? Yashin was the first modern keeper than someone who made it possible for keepers to be more than just shot-stoppers.

Peter Radenković and other roaming goalkeepers

Yashin, however, was not alone in that regard. Around the time Yashin dazzled the world another keeper playing in Munich for 1860 München was also at the top of his game. His name was Petar Radenković. Born in Belgrade Radenković played 96 games for OFK Beograd in the 1950s. After being refused a move to Red Star Belgrade Radenković left Yugoslavia playing 13 games for Wormatia Worms saving the club from relegation.

It was enough to convince 1860 head coach Max Merkel to sign the Yugoslav with whom he would soon develop a love-hate relationship. Although 1860 won the DFB Pokal in 1964, reached the European Cup Winners’ Cup final against West Ham in 1965 and won the German championship in 1966 the two would often clash. The reason was that Radenković was a roaming goalkeeper.

The game against West Ham United, in particular, showed Radenković’s full skill set. Although 1860 lost the game 2-0 to the Hammers Radenković was outstanding. Making key saves he also stopped several West Ham attacks by storming far out of his box.

Dubbed a football entertainer Radenković liked to roam the field and break down attacks before they developed. He would also often dribble the ball past onrushing attackers heading almost to the middle line with the ball on his feet to start counter-attacks. Like Yashin, he was also known for being communicative with his defence. All attributes that we now see with Manuel Neuer.

At the same time, people would fail to mention Radenković when it comes to naming the first modern keepers in the game. The reason was of course attention—playing abroad Radenković could not play for Yugoslavia and was therefore barred from the biggest stage. His star was therefore only regional, but he left an impact on the Bundesliga and German football nonetheless.

Evolution instead of innovation – Placing players in a timeline

Furthermore, it shows that what Manuel Neuer is doing is not new. Instead, it builds on the likes of Yashin and Radenković. Other keepers also come to mind when thinking of the roaming goalkeeper. The Dutch keeper Edwin van der Sar, for example, was hardly a typical shot-stopper. Instead, it was often claimed that his actual shot-stopping skills were mediocre. But Van der Sar did not need to be a shot-stopper as he would often break down plays outside the box.

Van der Sar almost played like a libero, which was important in the Dutch game as it allowed Ajax, where he started his career under Louis van Gaal to play without a libero. Instead, van der Sar became the first sweeper-keeper before the term was coined to describe Manuel Neuer. 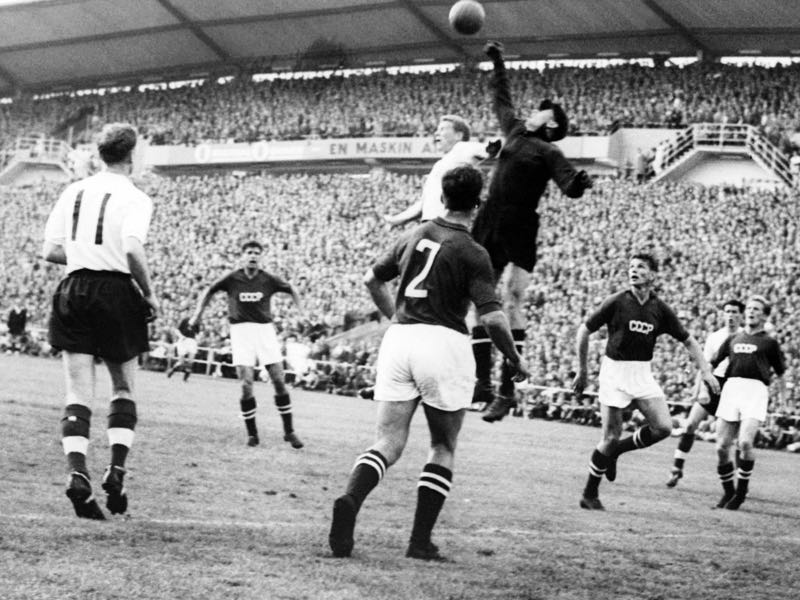 Lev Yashin’s tendencies to come far outside his six-yard box was something completely alien to most football fans. (STAFF/AFP/Getty Images)

To sum up, no what Neuer was not new and yes, we need to be able to compare players from different ages to get to the present day. Because although Manuel Neuer’s game is not something unheard of it is still innovative. It builds on the experience of other keepers that have in turn innovated the game. Lev Yashin gave the world box control, and spectacular diving saves, Radenković was the ball playing goalkeeper and Edwin van der Sar the original sweeper keeper. Manuel Neuer combines styles of all three, and many others not mentioned in this article.

At the same time, I am always careful when it comes to comparing players of various ages, different leagues and positions. The game is not even played the same way in the different leagues in Europe let alone different continents. Skills that worked 30 years ago might not be applicable today. To come to this conclusion, however, one has to compare keepers from different eras. It is a tool that allows us to place keepers, or any other player, into a certain timeline. It also allows us to put achievements into perspective. It might, therefore, be best to completely isolate style elements of players and see the game as a transgression almost like an evolution.