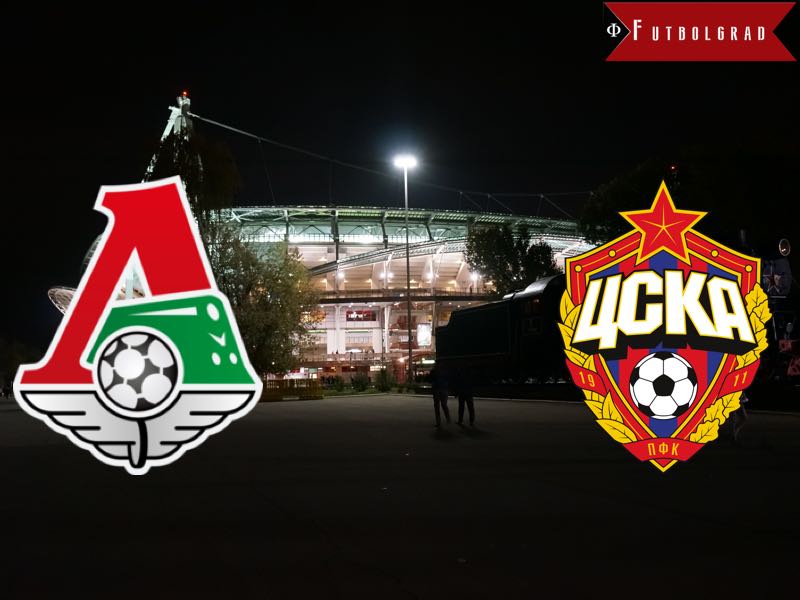 Despite the fact that it is the small Moscow derby, Lokomotiv vs CSKA Moscow is our Futbolgrad match of the week. Indeed the most important matches of Russia’s capital have always involved Spartak, CSKA, or Dinamo Moscow, with CSKA Moscow vs Spartak Moscow being the most prestigious matchup.

Lokomotiv is often belittled by the fans of the other three Moscow-based teams, who see the team in a similar light to how German fans see Bayer Leverkusen, VfL Wolfsburg, or RB Leipzig—a soulless corporate club, in this case owned by the Russian Railways.

Furthermore, during the time of the Soviet Union, Lokomotiv was perceived as the weakest link in the chain of Moscow-based clubs. Spartak was by far the most popular club in the capital, followed by CSKA, Dinamo, and then Torpedo, which gathered support from the workers of the ZiL automotive works.

Lokomotiv was considered a team that would bounce back and forth between the Soviet Vysshaya Liga and the Soviet Pervaya Liga (first division). It was not until the 1990s and the establishment of an independent Russian Federation that Lokomotiv became a top team in the country.

By the late 1990s Lokomotiv became Spartak’s closest challenger, and with two league titles in the early 2000s (2002, and 2004) the first team to break Spartak’s strangle hold over the Russian Top Division.

The league title in 2004 was Lokomotiv’s last, despite the fact that the Russian Railways invested heavily both in the club and its infrastructure. Yet Lokomotiv was never able to replicate the successes of the early 2000s, and the club has had a poor start to the season.

Lokomotiv has struggled this season

With nine points from the first ten games Lokomotiv are currently 13th, and therefore on one of the relegation playoff spots. Things were supposed to be better after Yuri Semin took over from Igor Cherevchenko after matchday two.

Of course Yuri Semin was only brought in after Lokomotiv’s board failed to entice Rostov’s head coach Kurban Berdyev to take the Lokomotiv job (read more about it here). Cherevchenko started the season with 0-0 draw in Saint Petersburg against Zenit, not the worst result all things considered, and a 2-2 draw against Tom Tomsk.

Semin then picked up the club’s first three points in a 2-1 victory over Krasnodar, but then lost 1-0 against Spartak Moscow, FC Ufa, and FC Rostov before drawing Arsenal Tula 1-1 on matchday 9, and Amkar Perm 0-0 on matchday 10. Six points from six matches is certainly below the expectations of Lokomotiv’s board, which had high expectations from signing Yuri Semin, who guided Lokomotiv to the two club titles in the early 2000s.

But Semin is now 69, and his last successful season as a head coach was in 2008-09 when he guided Dynamo Kyiv to a league championship, and the semi-final of the UEFA Cup. From the very beginning there were questions about Semin’s ability to still coach at the highest level, and Lokomotiv’s recent results suggest that the club has gone backward, and not forward, under the new coach.

There have been rumblings that the match against CSKA could be decisive for Semin’s future at the club. It is also believed that Semin has lost the dressing room, and that some players are now playing against the head coach.

These reports were somewhat confirmed by Lokomotiv midfielder Aleksandr Samedov, who told Sport-Ekspress that he was unhappy with his halftime substitution against Spartak Moscow, and that he confronted the coach about it afterwards.

Lokomotiv vs CSKA Moscow could be decisive for Semin

Semin meanwhile has told Sport-Ekspress that the current situation has been difficult for the club. “If we knew how to win, he would fix it. This is a difficult situation for us. Many of our players have never been in this kind of situation. Everything depends on us.”

Lokomotiv’s head coach will therefore go into the derby against CSKA Moscow under intense pressure. There is, however, some hope for Lokomotiv, as CSKA will be without the banned Roman Eremenko, and Igor Akinfeev, Alan Dzagoev, Aleksei Ionov, and Zoran Tosić are struggling with injuries, and are doubtful for the derby.

Akinfeev, Ionov and Tosić were in the line-up on Tuesday, as CSKA Moscow faced AS Monaco in the Champions League. The 1-1 draw at home at the Arena CSKA kept the Army Men’s Champions League hopes alive, but the match was also a tightly fought affair, and Slutsky told the media that Akinfeev could only train in the gym this week.

CSKA are currently third in the table with 21 points, one point behind league leaders Spartak, and Zenit, who are both on 22 points. Hence, under normal circumstances CSKA would be the favourite for the match at the Lokomotiv Stadium (Sunday 14:30 GMT). But given CSKA’s injury problems, and the difficult midweek fixture against Monaco, CSKA will have to be careful against Loko, who will be highly motivated to end their crisis against their local rival