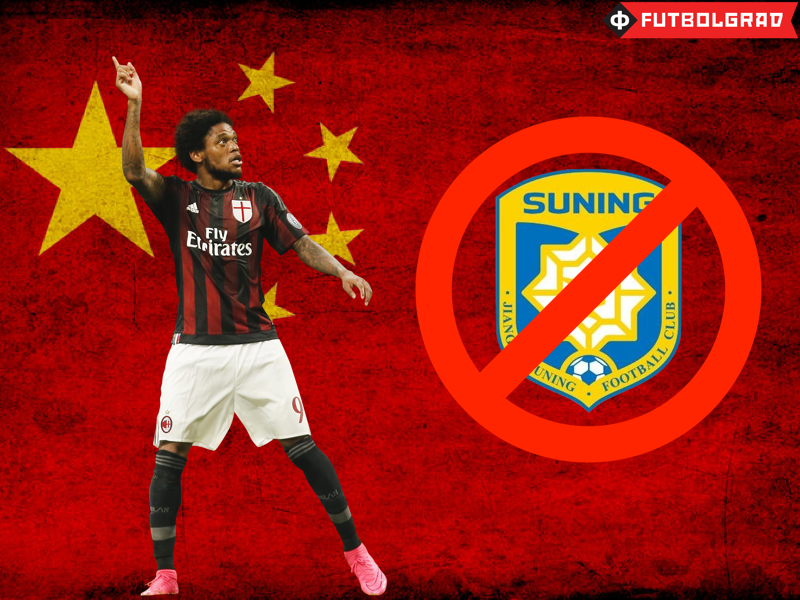 In a stunning turnaround AC Milan’s Brazilian striker Luiz Adriano has refused to sign a contract in China. As Futbolgrad reported on January 12 that Luiz Adriano had been signed by a Chinese mystery club, which turned out to be the Nanjing based club Jiangsu Suning.

Italian Football Daily reported that Luiz Adriano was spotted at the Milan airport wearing a Jiangsu Suning scarf. Afterwards the former Shakhtar Donetsk striker flew to China where he was supposed to sign a contract with the Chinese Super League team.

Pictures show Luiz Adriano arriving in Nanjing where several fans of Jiangsu Suning were awaiting the arrival of the Brazilian. Several pictures also show Luiz Adriano sitting in a bus on the way to the club holding the light blue Jiangsu scarf into the camera. Adriano even had to enlist help from security as fans made it impossible for him to leave the airport.

Later the Brazilian news agency Globo reported that as of Tuesday January 19 the deal is now off, as Luiz Adriano has rejected the contract that was offered to him. AC Milan was expected to receive €14 million from the Chinese club.

For the Italian club Luiz Adriano’s refusal to sign a contract with the Chinese club will be a massive disappointment as the club hoped to use the €14 million received from the deal to strengthen the squad in the winter break.

Luiz Adriano’s team reported that the Brazilian will be traveling back to Italy immediately, and that he will train with AC Milan on Thursday. AC Milan will, however, continue in their attempts in finding a new club for Adriano as the club has several strikers, and needs the money to strengthen other areas of the squad.

With Luiz Adriano’s transfer to China off the Brazilian may once again become a transfer target for CSKA Moscow, who are looking for a potential replacement for their Ivorian striker Seydou Doumbia, who is expected to leave the club as early as this winter.

On January 12 Futbolgrad suggested that Luiz Adriano’s move to China has become a symbol for changing market dynamics, as China seems to have surpassed the post-Soviet space as a prime destination of Brazilian players. Luiz Adriano’s failed deal, however, suggests that the fact that Chinese clubs do not compete in top European competitions could remain a major obstacle for them.

Indeed Luiz Adriano’s goal scoring record of 32 goals in 65 UEFA games shows that the striker deserves to play for a club that competes in the UEFA Champions League.