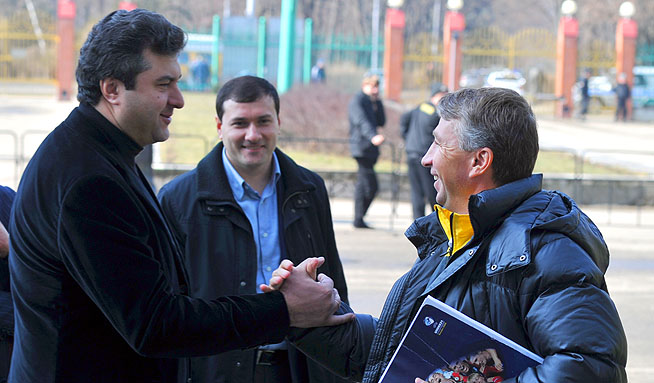 On June 7 Futbolgrad ran a story that Metalurh Donetsk may cease operations and merge with FC Stal Dniprodzerzhynsk. This news was confirmed on the weekend by an official statement on the club’s homepage. The new team, which will be based out of Dniprodzerzhynsk, has not officially announced a new club name at this point. The club has, however, released an official statement regarding the composition of the new squad and coaching staff.

Coached by Vladimir Maziar, the new team, according to Ukrainian sports portal Tribuna.com, will include ten players from Stal Dniprodzerzhynsk to form the backbone of the new squad. Sporting director Vardan Israelyan also pointed out, however, that: “There will be changes in the team, but more details about this can be said in a few days.” Along with potential new signings, several Metalurh players will also be playing with the new club.

The end of Oleg Mkrtchyan’s investment at Metalurh, however, has also meant that some of its brightest prospects have already left the former Donetsk-based club. The powerful Armenian tycoon has invested a significant amount of money in player contracts, and owns the rights of several prospects in Ukraine, Russia, and Armenia.

Mkrtchyan decided to end his relationship with Metalurh because of the war in the Donbass and has now shifted his business activities to Russia, where he is working closely with Suleiman Kerimov at Anzhi Makhachkala. The Dagestani club has now replaced Metalurh as a development club for Mkrtchyan’s players before they make the jump to a bigger league. Even before the merger several players were moved from Metalurh to Anzhi Makhachkala.

This shift to Dagestan also helps to illustrate some of the connections between rich regional oligarchs such as Mkrtchyan, and player agents who represent the players integral to their investment strategies.

The most recent transfer was that of the young Dutch left-back Lorenzo Ebecilio, who played last season on loan at Mordovia Saransk in Russia, and who was sold to Anzhi Makhachkala on Sunday. Ebicilio is represented by Dimitry Seluk, who also represents Yaya and Kolo Touré. Yaya even played for Metalurh between 2003 and 2005. Ebecilio’s move to Anzhi concludes a long list of former Metalurh players who have recently made the move to Dagestan, and is significant in that it shows Seluk’s obvious connection with several clubs in the region.

Ebecilio, who was transferred from Ajax Amsterdam to Metalurh in January 2013, has spent most of his time on contract with Metalurh loaned out to other clubs. In 2013-14 he played for FK Qəbələ in Azerbaijan, and then last season at the above mentioned Russian club Mordovia Saransk.

According to transfermarkt.de Seluk represents several additional players who have recently made the move from Metalurh Donetsk to Anzhi Makhachkala, including the Nigerien player Amadou Moutari, and the Brazilian Leonardo. Seluk also represents the Belgian-Brazilian playmaker Danilo, who has just returned to Metalurh after his loan at Mordovia expired, and it would be no surprise if Danilo soon made the move to the Dagestani capital as well.

This sort of football network is a common feature in the post-Soviet space, and Metalurh’s recent transfers are significant because they highlight some of Eastern Europe’s investment streams, and the way which many clubs are interconnected through ownership and player agents. The interconnection between several clubs of the region is illustrated by the activity of Metalurh’s network which has a reach that extends from Mordovia in Russia, to FK Qəbələ in Azerbaijan.