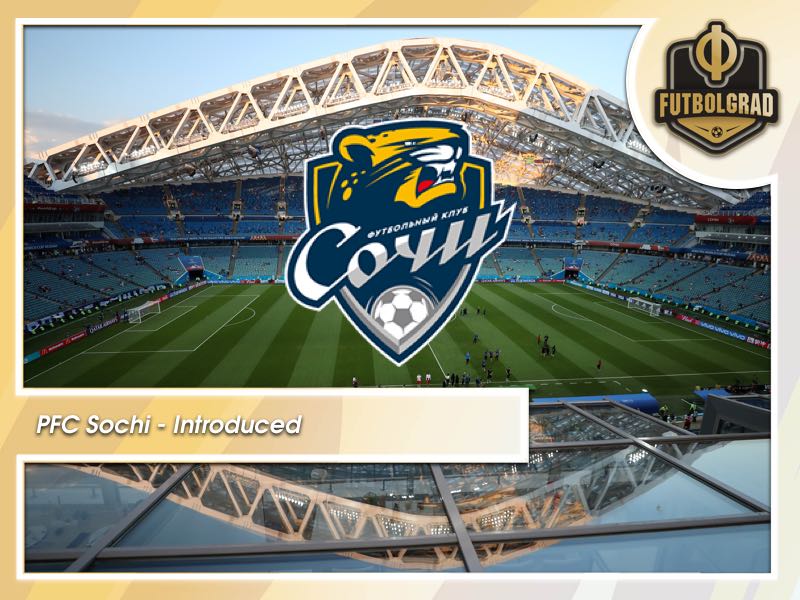 When the Russian Premier Liga kicks off this weekend there will be a first division side based in Sochi for the first time since the Olympic Games took place in the Black Sea resort town in 2014. In fact, PFC Sochi will be the first first division football club in Sochi since Zhemchuzhina Sochi were relegated from the Vysshaya Liga back in 1999.

Since then various projects to re-establish a first division side in Russia’s favourite holiday resort town have come and gone. Then 13 months ago owner Boris Rotenburg opted to move Dinamo St. Petersburg’s Football National League (second division) licence down south to Adler, the suburb in which the Fisht Olympic Stadium is located.

It was a controversial move at the time. After all, Dinamo St. Petersburg were considered one of the most historic sides in Russian football. But the ownership felt that it was impossible to succeed in the shadow of Zenit St. Petersburg — despite St. Petersburg’s overall population of almost 5 million people.

The pull of a World Cup ready stadium and a virgin Russian football market was, however, to much to resist for Boris Rotenberg. A billionaire in own rights the Boris is the brother of powerful oligarch Arkady Rotenberg. The Rotenbergs, in fact, benefited heavily from the Olympic Games taking place in Sochi. Arkady, a close boyhood friend of Vladimir Putin, saw his companies win government contracts worth $7.4 billion for construction projects at the Olympics.

Sochi, in fact, has always been a prestigious project for the Russian government. First to host the Olympic Games in 2014 and then as a host city for the 2017 FIFA Confederations Cup and the 2018 FIFA World Cup. Furthermore, Sochi’s Adler district is now also the host of a Kontinental Hockey League team and the Russian Formula 1 Grand Prix.

What was, however, lacking was a permanent tennant for the Fisht Stadium. Beautifully located right on the Black Sea coast, and just a few hundred metres from Abkhazia — a semi-autonomous state that is the source of an ongoing dispute between Russia and Georgia — the Fisht is one of Russia’s most beautiful football stadiums.

Until last season, however, it was mostly empty. Occassionally used by the national team it also hosted the Russian Cup in 2017.

Then following the World Cup the Boris Rotenberg moved Dinamo south to Sochi. There the club, however, struggled to truly establish itself among the local fan base. Already the fourth club trying to make it in the city the average attendance was 3816 per game, which was among the best in the second division but miniscule given that the Fisht holds 48,000 spectators.

Establishing itself among the local fan-base, in fact, could be tricky. Sochi is a typical holiday resort in which most visitors support other clubs. Even the permanent residents tend to come from other parts of Russia and the Soviet Union and, for the most part, support the clubs that they supported in their native towns. Those people, therefore, might come out when the likes of Spartak and Zenit come to town but are unlikely to create a permanent fan base.

Meanwhile, the permanent fan base was somewhat upset when Dinamo St. Petersburg moved down to the Black Sea. For hardcore fans PFC Sochi was a plastic club, others were upset about the name. As first reported by Russian Football News prior to the relocation, an ultra leader from the former Zhemchuzhina Sochi was very outspoken about the move. “If they don’t name the new club Zhemchuzhina, we won’t be supporting it,” he said.

Therefore, the question heading into the 2019/20 season will be whether PFC Sochi will be sustainable in the Russian Premier Liga. Financial support by the Rotenberg’s and the Russian state will be ensured.

Heading into the new season the club’s promotion almost came by surprise. With a low attendance and a squad made up of decent second division players there was a sense that PFC Sochi could struggle this season. But just a few months after the club’s promotion things have turned around quickly thanks to a little help by Zenit St. Petersburg.

Sochi have recently signed four former Zenit players on free transfers. Together Dmitry Poloz, Ibragim Tsallagov, Elmir Nabiullin and Ivan Novoseltsev have a transfer value of €10 million but they were all signed for nothing. That in turn has led to suggestions in Russia that PFC Sochi, similar to Orenburg, could be a sort of farm team for Zenit in the upcoming season.

Suggestions that will follow the team throughout the season. At the same time, the four new players will bring some significant star power to the Sochi-based club and in actual fact will make them a strong candidate to avoid relegation at the end of the season.