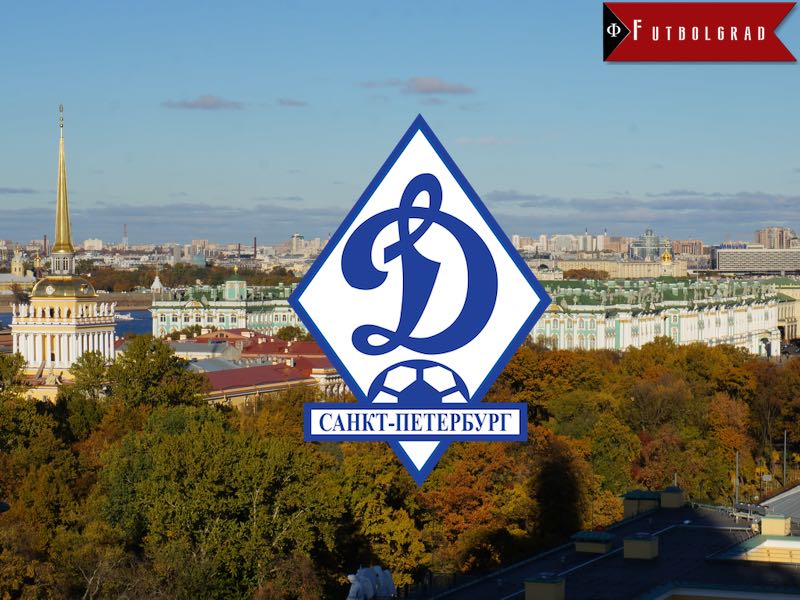 The last time I wrote about Dinamo Saint Petersburg was in 2015, and despite the fact that the team was just relegated there was a great deal of optimism. It was also a club that was, in essence, an entirely different one to the current Dinamo Saint Petersburg. Such a change won’t come as a great surprise to seasoned followers of Russian football, but what is more surprising is that the future for the new Dinamo is looking even better than it did back then.

The new Dinamo is truly a new club

Maksim Mikhalko’s piece on the current Dinamo, which first appeared in the weekly ‘Football’ magazine, comes with a hefty opening paragraph “warning” the reader “not to confuse the old Dinamo with the current one”. Dinamo have disbanded and been reformed several times in the post-Soviet era, and the incarnation that existed in fits and starts for almost 15 years under construction magnate Leonid Tsapu finally succumbed at the end of 2015 after a dismal season in the second-tier Football National League.

That season stories regularly circulated that Dinamo had large debts, and that players had not been paid; perhaps, therefore, it is no coincidence that the new Dinamo makes it clear it is “in no way linked” to Tsapu’s possibly still debt-ridden club—though the famous Dinamo branding has been retained.

The new owner of Dinamo is a name familiar to most Russia football enthusiasts—Boris Rotenberg. Rotenberg is a billionaire with close links to the Moscow elite, and until July 2015 he was President of Dinamo Moscow. At that time he was already being linked with Dinamo Saint Petersburg, and many (including me) expected a ‘farm club’ structure, with the Saint Petersburg side feeding the Moscow side. However, having severed his links to Dinamo Moscow, Rotenberg is instead constructing an entirely separate, and successful, entity in the Northern Capital. As we head into the 2016-17 winter break Dinamo lead the third-tier Professional Football League, and are building up a healthy lead over second-placed Dolgoprudniy.

Rotenberg’s involvement, and funding, has given Dinamo much-needed stability, and an ability to plan ahead, according to club press officer Vladislav Panyukov. Panyukov notes that during the winter break of last season—not long after Rotenberg started to invest in the club in earnest—Dinamo conducted lengthy training camps. Training camps may not sound like a big deal, but for many third-tier sides making use of the lengthy winter break (five months) in any prolonged or meaningful way is difficult due to financial constraints. Rotenberg’s investment has made this possible, and it had an immediate impact as Dinamo lost just one game after the winter break, and gathered just two points fewer than runaway champions FC Khimki. 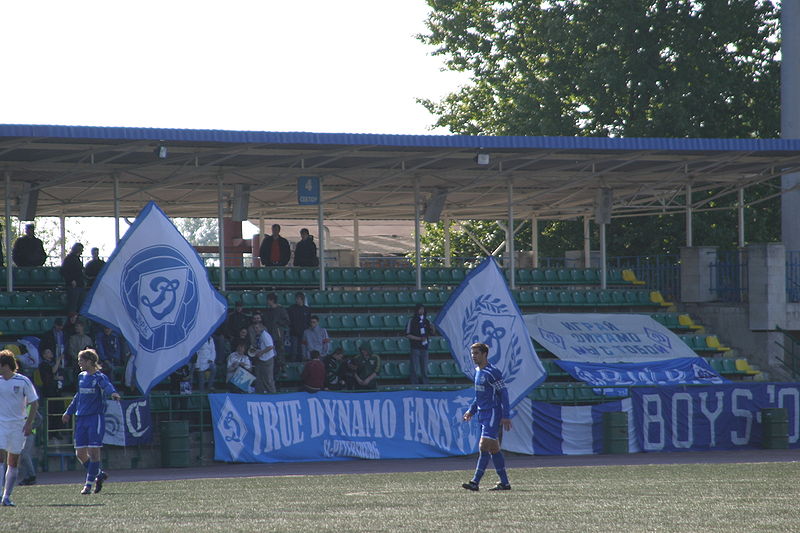 Dinamo Saint Petersburg in action at the Minor Arena on Petrovsky Island – Image by Gudbrud (This is a free work, you can copy, distribute, and modify it under the terms of the Free Art License)

With this solid foundation in place the main task for the 2016-17 season was to strengthen problem positions with new signings. Mikhail Markosov, a striker who has played for various third tier clubs, has made a quick impact with six goals and three assists before the winter break; another new player with plenty of experience of the lower divisions is midfielder Mikhail Kozlov, who once appeared for city rivals Zenit in the UEFA Cup. Current league top scorer Maksim Rogov was also on Zenit’s books, as was defender Valentin Filatov. Filatov was in and out of Zenit’s first team as a youngster; injury and the tragic death of both his parents while they were traveling to a Zenit match saw his top-flight career come to a halt.

Whereas all of these players are in their thirties, Dinamo also have young prospects who started at Russian Football Premier League clubs in their first team: Artyom Kulishev could not break into FC Rostov’s first team but is scoring regularly from midfield at Dinamo, and defenders Maksim Starkov and Mikhail Kovalenko are FC Krasnodar and Zenit youth academy products respectively.

Where will Dinamo play?

Currently Dinamo play home games either at the Petrovsky Stadium Minor Arena (Zenit play at the Grand Arena) or Nova Arena in the northern suburbs of Saint Petersburg. However, there is a Dinamo Stadium in the city, which hosted the first ever match in the history of the USSR Championship—Dinamo beat Lokomotiv Moscow 3-1. Dinamo currently uses the stadium as a training base, and though it was their home during their Soviet heyday it seems unlikely that they will return to play there any time soon.

The stadium would need to increase seating capacity if it were to host even second tier matches, and its location on the prestigious Krestovsky Island makes it vulnerable to sale for real estate development—a portion of the stadium’s footprint went this way around a decade ago. More likely is that Zenit’s imminent move away from the Petrovsky to their new arena, which is also based on the Krestovsky Island, means that Dinamo will be able to start using the Grand Arena. Press officer Panyukov has told Futbolgrad that Rotenberg will be talking to the Saint Petersburg government, who own the stadium, about this. 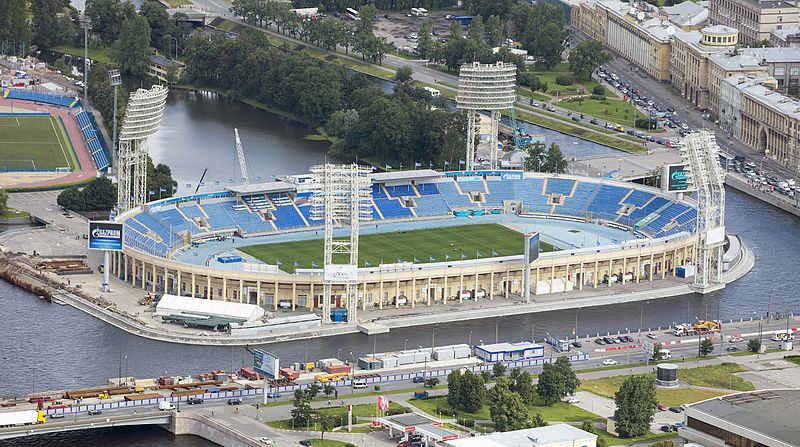 Although links between Dinamo and Zenit are not exactly cordial—many, including myself, wondered why there was not any support from the super-rich neighbours when Dinamo struggled to pay the bills in 2014-15—it seems that Zenit’s elevated status may in a roundabout way aid Dinamo’s progression. Were Dinamo to make it to the top flight, use of the Grand Petrovsky Arena would make it easier to attract a larger fan base—perhaps even some fans jaded by Gazprom’s Zenit.

Dinamo versus Zenit games in the RFPL would appeal to nostalgists and football historians alike, as during the early part of the Soviet era Dinamo and Zenit regularly clashed in the top flight. Indeed Dinamo were initially top dogs in the city, as they were both founding members of the elite division, while Zenit were in the second division, and the side that, of the two, usually finished in a higher position.

Should Dinamo get promoted to the FNL this season (which at the time of writing this seems highly likely) one would imagine they’d take a similar route to—the also wealthy and newly-founded—FC Krasnodar, FC Ufa and FC Tosno and immediately start challenging for a place in the top flight. Will Dinamo get there? Given Rotenberg’s wealth, the careful approach currently being taken and the poor state of finances at many other second tier clubs, probably yes.

Will they be as easy to love as the ‘old’ Dinamo, which bobbed between levels two and three and was seen by some as the ‘hipster’ club to follow in Russia? Probably not, because if/when they get to the RFPL, it will largely be down to money—albeit money not splurged but spent wisely. Are Dinamo following the only real course to make it in Russian, and arguably any top European football? Yes! And in that sense the people behind the club have ensured that this is a realistic and pragmatic project.

If we see Dinamo take a similar route to the top as Krasnodar have under retail magnate Sergey Galitsky, then they will only win fans. The days of rich people spending wildly on Russian clubs seem to be sliding away from us; instead the elites are taking a more measured approach, trying to build the house from the foundations rather than putting a gold roof on first—and for that at both Krasnodar and Ufa they have won over fans tired of showiness and looking for something more sustainable.

The prospect of an all Saint Petersburg Russian Football Premier League derby is, for me at least, almost too exciting to explain. Rotenberg’s Dinamo project will hopefully also lay to rest one of the mysteries that has dogged me for all of the twenty years I have followed Russian football: why is it that a city the size of Saint Petersburg has only ever had one top flight team…