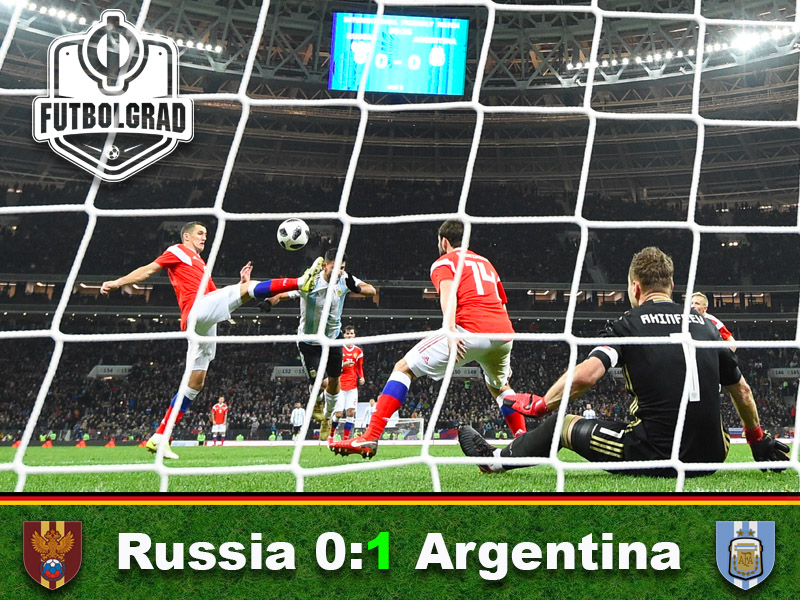 Andrew Flint reporting from the Luzhniki –

Sergio Agüero stole the win for Argentina five minutes from time after his header had been blocked by Georgi Dzhikia to settle a tepid encounter in chilly conditions. Manchester City’s all-time top goalscorer could have opened his account on the stroke of half-time but for a fantastic fingertip save down low from Igor Akinfeev that kept the scores level.

The official re-opening of Moscow’s Luzhniki Stadium played out with more of a whimper than a bang as Russia’s high-tempo pressing petered out. The natural style of skipper Denis Glushakov and Daler Kuzyaev gave little time for Argentina’s playmakers on the ball in the opening 15 minutes but failed to create much danger. Konstantin Rausch was central to a number of early forays into Argentine territory, going down in the box as early as the 4th minute and appealing vigorously for a penalty. Contact was clean though and nothing was given.

Argentina’s first real sight at goal came after 20 minutes as they began to ease into the game. Angel Di Maria broke free in the left channel, forcing Igor Akinfeev to save with his toes and Georgi Dzhikia to scramble the loose ball behind.  Three minutes later Akinfeev was at full stretch down low to tip a Sergio Agüero effort round the post.

Russia seemed content to contain what little direct threat there was from their visitors, with their few chances disjointed. Mario Fernandes threw away a decent opportunity after outwitting Di Maria with clever chest control by passing sloppily, while Dmitry Poloz struggled to make any real impression on the game before being replaced by Alan Dzagoev at half-time.

The second half was even more low key as star attraction Lionel Messi was more subdued than usual. He was forced deep on numerous occasions, and despite a few beautifully hit passes out wide he never threatened the goal itself. Just before the hour mark, Glushakov turned his marker outside the box and flashed a hopeful effort a foot wide in what was the closest attempt for Russia. A few moments later he forced a block from Sergio Romero that was collected at the second attempt.

the predictable flurry of substitutions disrupted the pace more so for the following 25 minutes before substitute Cristian Pavon broke down the right and crossed for Aguero, whose header hit Dzhikia on the six-yard line. As the ball rebounded, Agüero gleefully snaffled the chance to send the Albiceleste home with the win.

Denis Glushakov was the most active player for Russia at both ends of the pitch and was marginally unlucky to end on the losing side. He had Russia’s two best chances and was a constant menace in midfield to disrupt the influence of Lionel Messi dropping deep. The movement of Fedor Smolov was a brief highlight, but without his captain’s calming and energetic display it is unlikely he would have had as much possession. 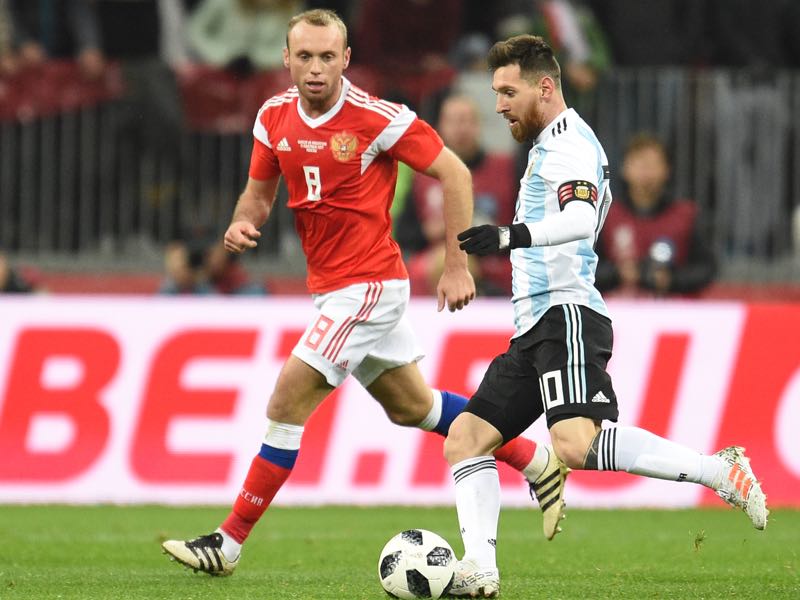 Denis Glushakov of Russia competes for the ball with Lionel Messi of Argentina during an international friendly match between Russia and Argentina at Luzhniki Stadium on November 11, 2017 in Moscow, Russia. (Photo by Epsilon/Getty Images)

The re-opening of the cavernous Luzhniki Stadium was the main event in an otherwise unremarkable friendly match. The run-up to the game had been staged with a ‘Moscow Football Day’ and despite the depressing weather had generated a mass of excitement that the performance from both sides sadly failed to deliver.