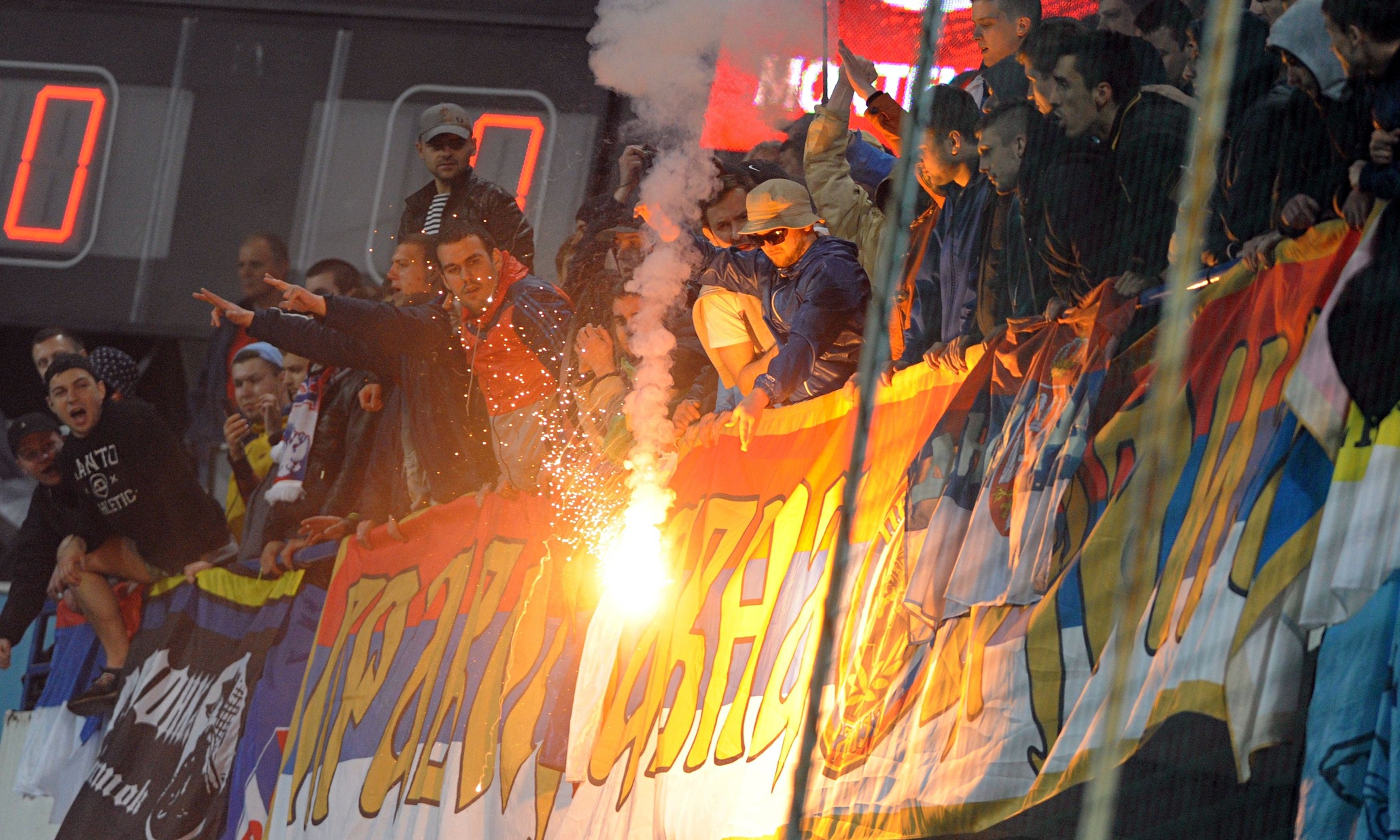 Next week, Montenegro travel to Russia for a Euro 2016 qualifier and it is an occasion that is being treated with much scrutiny after the abandonment of the corresponding fixture in March.

You will recall that the action was stopped after Russian midfielder Dmitri Kombarov was hit by a missile after 67 minutes with the score 0-0. The ensuing melee coupled with the fact that the match had previously been halted after the visiting goalkeeper Igor Akinfeev was hit by a flare, meant that a 3-0 default victory was awarded to Russia. The Russians themselves did not escape sanction; they were given a €50,000 fine.

In the wake of the incident, much of the press coverage chose to simplify its significance. On the BBC’s World Football Phone In, the generally excellent Paul Sarahs delved little deeper than to make curt but sweeping generalisations about the nature of football support in the Balkans. In particular, there was a rush to equate what took place in Podgorica with events in the Serbia vs. Albania qualifier that had been abandoned the previous October. 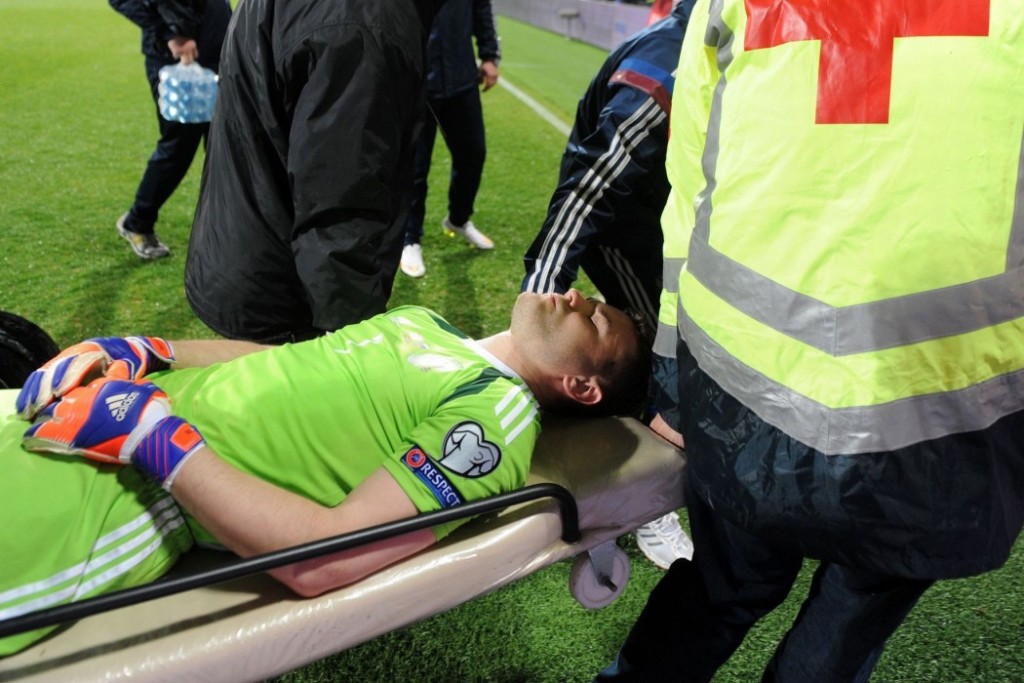 Pictures from the abandoned match in Podgorica

While the match did take place in an undeniably testy and tense atmosphere and the parallels made are, to a degree understandable, you need to delve a little deeper in order to identify possible reasons for the occurrence.

Serb-Albanian enmity has very deep roots and dates back to the Battle of the Kosovo Plain in 1389, a defeat that Serb nationalists claim led to their being forced northwards from a region that they perceive to be their traditional heartland. Kosovo is part of Serbia, the vast majority of Serbs would claim, notwithstanding the close cultural, ethnic and linguistic relationship between neighbouring Albania and that territory’s majority population. In the wake of the declaration of Kosovan independence in 2008, Serbia refused to recognise the fact and the country continues to regard Kosovo as its own.

Hence, Serb-Albanian relations have been uneasy at best and horrifically violent at worst for centuries—the likelihood that the first ever footballing encounter between the two nations would take place calmly was always slim.

Russia vs. Montenegro – From Allies to Foes

This is not the case with the relationship between Russia and Montenegro, two peoples who, for the most part, have been allies in the past. Although only fleetingly an independent state throughout its history, Montenegro received Russian assistance in the Russo-Turkish War of 1710-11 and returned the favour with their support in the Russo-Japanese War at the dawn of the twentieth century. Common institutions including orthodox religion and the Cyrillic alphabet helped foster a warm relationship and Montenegrins have acknowledged that ‘without Russia, we’re half a wagon load— with them, we’re over a hundred million’.

The trend has continued into recent times and Montenegro is the eighth most popular tourist destination for Russians. The town of Budva, for instance, has been nicknamed ‘Moscow by the Sea’, has signs in both languages, and has a Russian radio station. Also, Montenegro has, for much of its history, been politically unified with Serbia, another state with strong cultural ties to Russia.

Budva also known as Moscow on the Sea

This seemingly friendly international collaboration may be at the root of the problem, however. In 2012, the World Bank’s Monstat reported that Russian businessmen have majority stakes in 32% of foreign enterprises in Montenegro while it is estimated that 40% of the nation’s stunning Adriatic coastline is under the control of Russian nationals. Also in 2012, the Croatian news portal, Globus, labelled Montenegro as a Russian colony. The untrammelled free market ethos that has permeated Central and Eastern Europe since the fall of the Berlin Wall has been allowed a very loose rein.

These tendencies came to a head when one of the most high profile of Russian businessmen, Oleg Deripaska successfully bid for ownership of the country’s aluminium provider, KAP, producer of 80% of Montenegrin exports, 30% of its employment and 40% of its Gross Domestic Product. Since then, amid rumours that it would have been too expensive to bring the firm up to European regulatory standards, Deripaska has been accused of running the industry into the ground and racking up 470 million euros of debt. Refusing to accept liability, he then sued the state for 100 million euros.

Although the machinations of big business may seem remote from the ordinary lives of football fans, as such a key employer, the impact of Deripaska’s involvement on everyday lives in Montenegro is considerable. Add to that, a desire among many Montenegrins, spearheaded by Prime Minister Milo Đukanović, to align more closely with the EU, and one can see that relations with the former ally are under strain.

Of course, nervousness has been heightened by the way Russia has neatly and skilfully protected its interests in Ukraine, another country where a large Russian minority and a strong business presence has provided it with a stake. Montenegro does not border Russia, and while Russia often sees itself as the protector of all Slavic nations, the histories of the two countries are not so intimately intertwined as they are in the Ukrainian case. Montenegro, however, can nonetheless be viewed as a key strategic bulwark against European Union and NATO influence.

Russia vs. Montenegro – The Animosity is Real

So, animosity and resentment among Montenegrins toward Russia is real enough, if not on the level of the out and out hatred that was on display when a drone hovered above the pitch the night of the Serbia vs. Albania match. Tight security and an attendance mainly composed of home supporters should ensure that the upcoming fixture goes ahead without incident. In addition, Montenegrin coach Branko Brnović was quick to apologise to the Russians for the violence, his frustration evident as his team threaten to narrowly fail to achieve the success expected of them in European football. 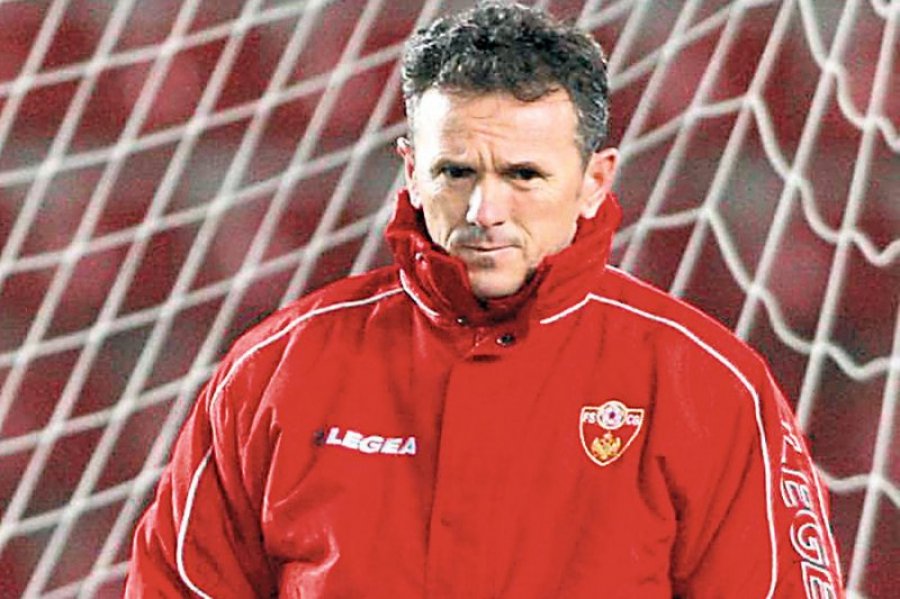 Both teams have a chance of winning qualification in a group that has been dominated by a resurgent Austria, but Montenegro’s results have regressed after pushing England so hard in qualifying for both Euro 2012 and the World Cup in Brazil. They could well have done with the points from the home fixture rather than the automatic 3-0 reverse and will do well to get anything at all from the Austrians when David Alaba and the team arrive in Podgorica in advance of the trip to Moscow.

Meanwhile Russia, facing an awkward tie against another country in which a Russian-inspired minority has declared independence (the territory of Transnistria having seceded from Moldova), can’t afford to slip up given that their rival Sweden should collect six points from its encounters with the Moldovans and Liechtenstein.

In the wake of Fabio Capello’s departure from his highly paid position as coach of the Sbornaia, the appointment of anyone would have come as a relief, so Leonid Slutsky arrives with automatic good will. At home, Russia should do enough to at least attain a play-off spot, while Montenegro will continue to rue the behaviour of its fans.

Rob Langham is co-founder of The Two Unfortunates blog, the primary focus of which is the English lower leagues. His work has appeared in When Saturday Comes, The Blizzard, In Bed with Maradona and a host of other websites and he can be followed on twitter at @twounfortunates.