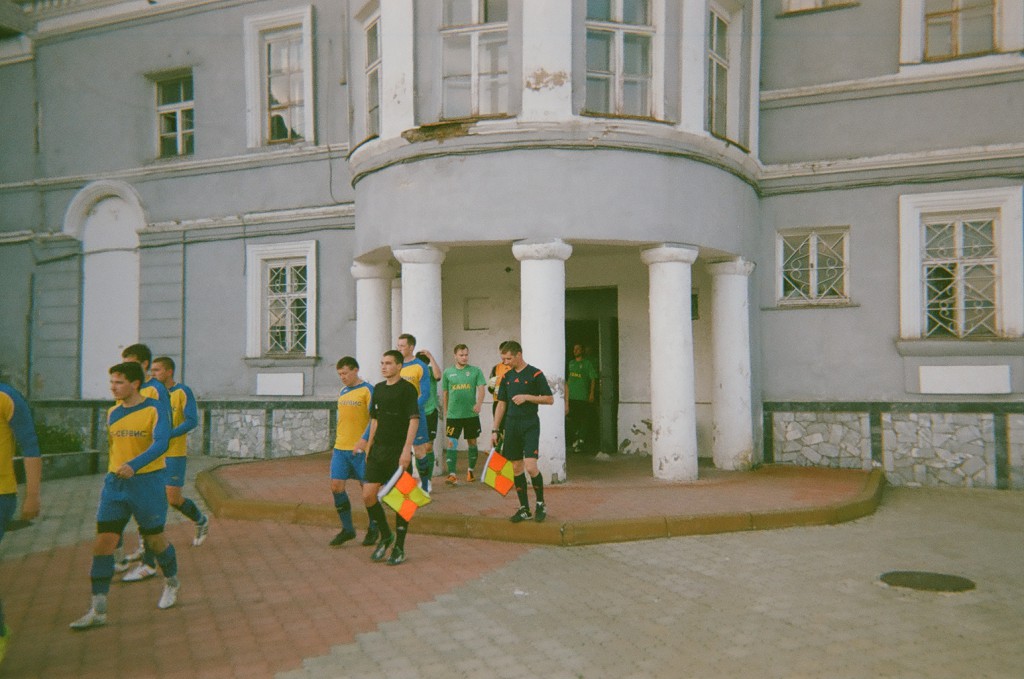 Goal Click is a new global football photography project. Its goal is to find one person from every country in the world to take photos that symbolize football in their country using disposable analogue cameras. You can follow on Instagram @goalclick.

In Russia the photographer Sergey Novikov produced a stunning series of photos for the Goal Click project, when he travelled to the Ural Mountains to capture images from seven towns. We spoke to Sergey about his incredible photos and what they reveal about Russian society. 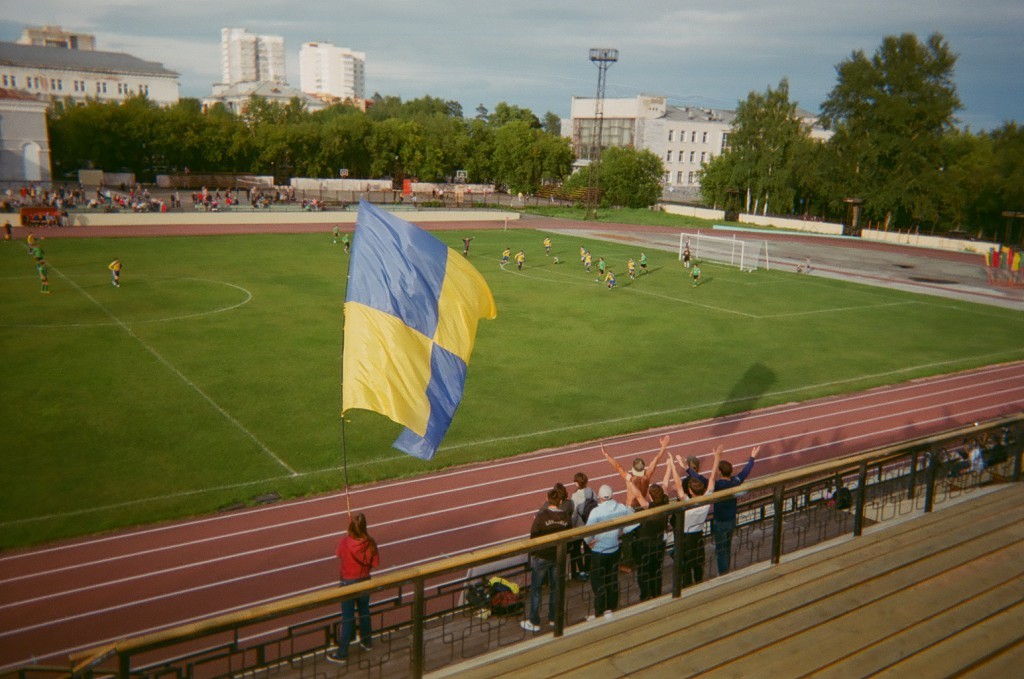 Why did you choose the Ural Mountains and these towns?

Since 2011 I have been documenting the world of Russian amateur football through my “Grassroots” project, finding the most picturesque football pitches in the country. With Goal Click I decided to head inland to the Ural Mountains, Russia’s spine where Europe and Asia meet. This is the middle of Russia, not geographically but culturally. I explored two regions of the Urals – Perm Krai and Sverdlovsk Oblast. They each have one representative in the Russian Football Premier League, but I was more interested in documenting the life of the real football underdogs—amateur clubs from local championships. In my story there are seven towns from the Ural Mountains: Perm, Uralsky, Chusovoy, Lysva, Kachkanar, Degtyarsk and Rezh.

The main economic activities in The Urals are mining and metalwork, which deeply impact the social life and football, including the names of the stadiums and clubs. Of the seven local stadiums that I visited, three were named “Metallurg” and two were called “Gornyak” (“Miner”).

The harsh nature of provincial Russia is displayed on the football pitches. The economic crisis in the country affects many aspects of football, including the financial support of the teams, the condition of pitches, and even the availability of medical care at the stadiums.

Nevertheless, the spirit of football traditionally prevails on a match day in the towns. Football always attracts a large number of locals into the stands at the weekend. Although there is no financial reward for a victory, players in the countryside fight in the matches for their team and town, as their fathers and grandfathers once did. The continuity of the generations, conservatism and the patriarchal character of modern Russia is clearly visible in the football stadiums of the small provincial towns. 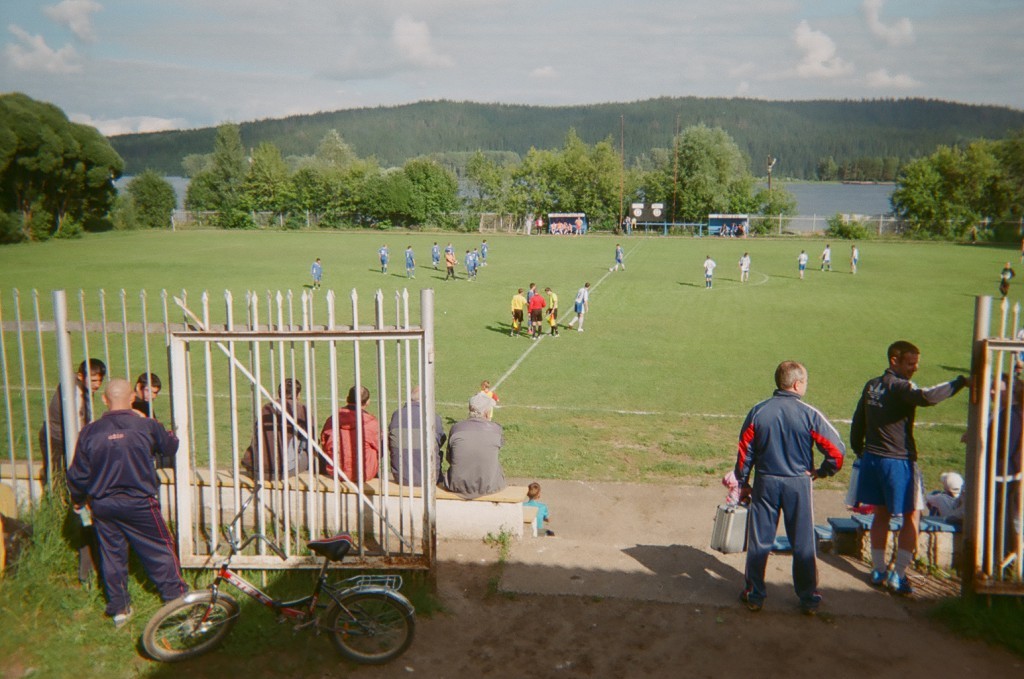 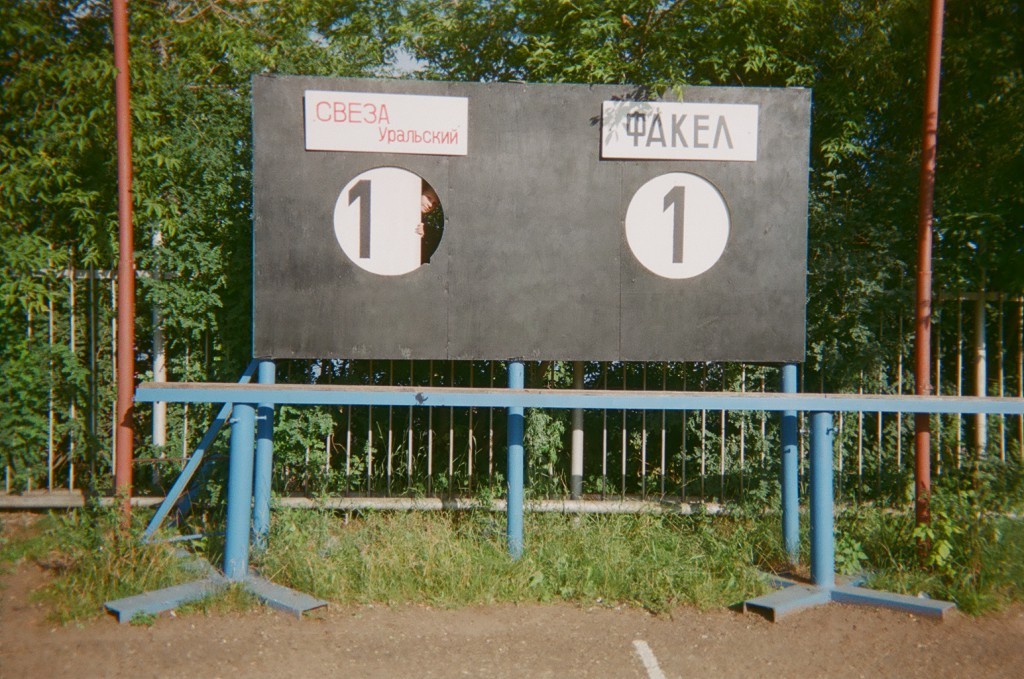 What do the Ural Mountains represent about modern Russia?

I like to document the countryside, not the big cities. In Russia, just two cities attract the money, Moscow and St Petersburg; all other cities, towns, and the countryside are quite poor. Life there is like that of 30 years ago in Soviet times. They have the same stadiums, the same citizens, the same interests in life and the same beliefs in politics and economics. This represents almost the whole of the country and we need to show its football—not just the games of the Champions League in Moscow.

The Stadiums are very old. There are quite a few funny photographs, for example the one where two players come out of the locker room and a woman is selling stuff like water and bread. It’s very Soviet. It’s quite rustic, quite old-fashioned, the benches are wooden, there is no money. For the changing rooms, they often use any buildings near the stadium; many have not been looked after and need some paint. I have seen changing rooms in a church. 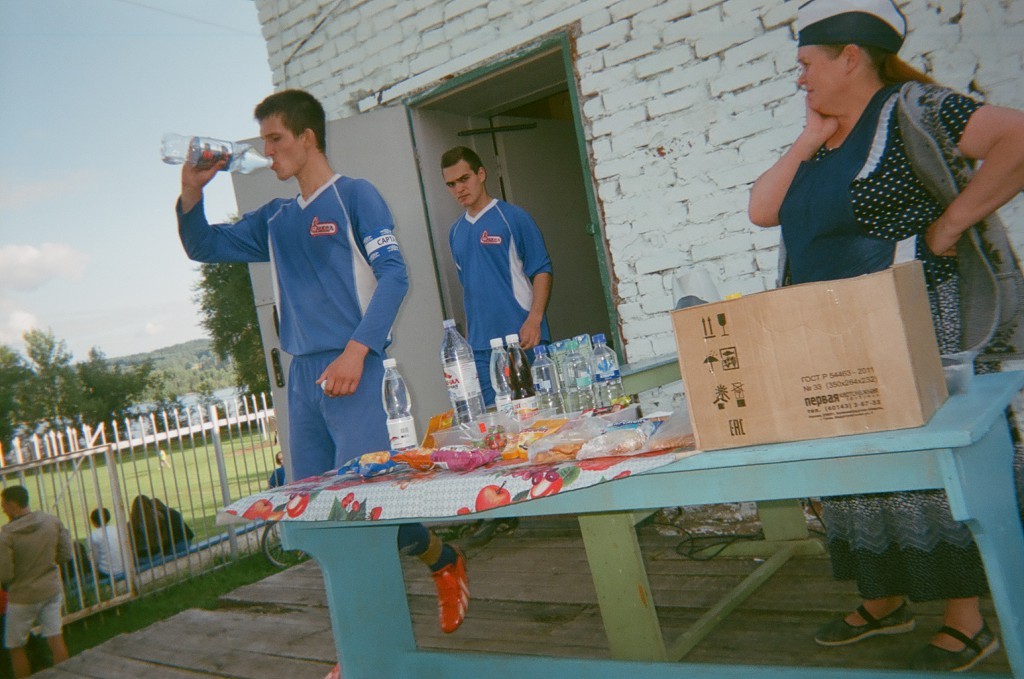 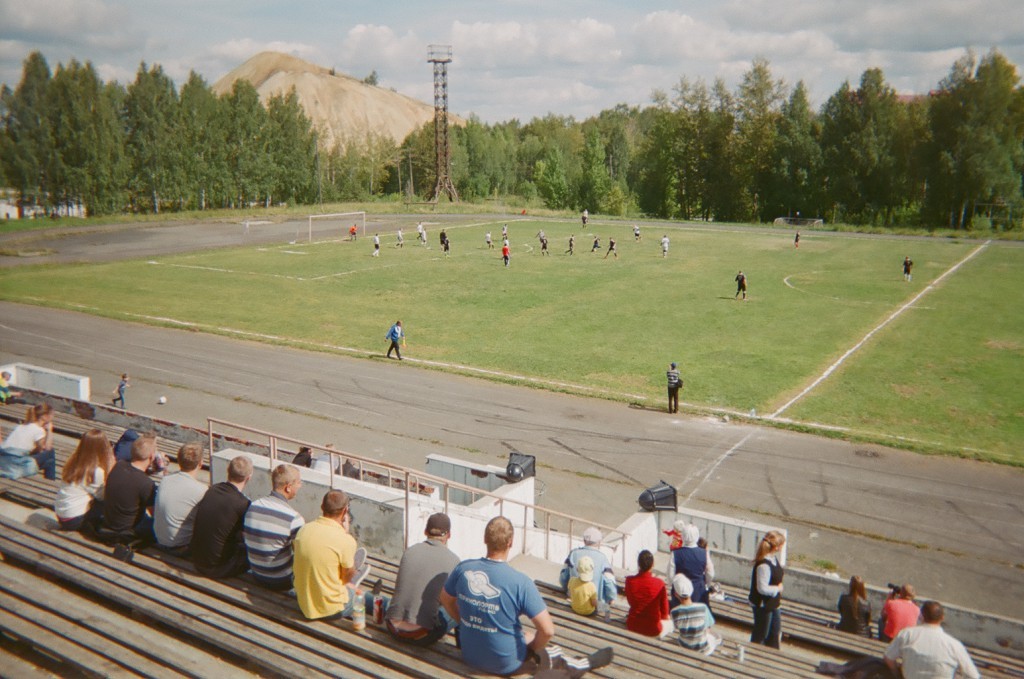 Were you trying to make any statement about Russian football with the photos?

I try to bring attention to amateur football in Russia. Usually there are only 200-300 people watching football live in the stadium, there is no TV broadcasting and photographs are rare. Many people do not even know which teams play in their region, they only know the main team of their city. In the countryside even the taxi drivers do not know where the stadium is in their town! But amateur football is the same as professional football: there are 11 players on the pitch; the rules are the same; the playing time is 90 minutes; and the life of the local players in the game is 10-15 years like in professional football. But they need our attention and support. I follow the comments on my website after I publish photos, so I can see how important it is for the people and teams involved in my project. I get great feedback and people invite me to places to shoot.

Football is a miniature of the country; it is a reflection of the economic and social situation in Russia. Although Russia will host the World Cup in 3 years and will construct 10 new stadiums, we are not reconstructing other stadiums. All the money goes to the major infrastructure, but not to the small clubs in the regions.

I see the stadiums as objects of social infrastructure, as elements of urban environment. My backgrounds around the stadiums always show something important for the local community—churches, power plants or mountains for example. People live there, and I like to show the infrastructure alongside the social life. It is documentary photography. 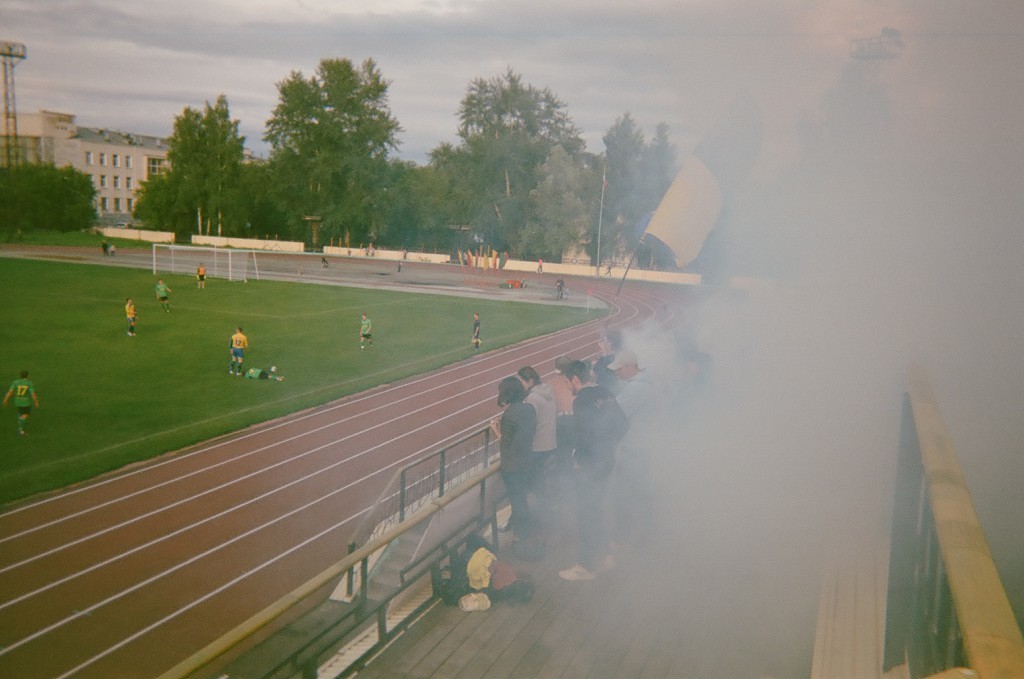 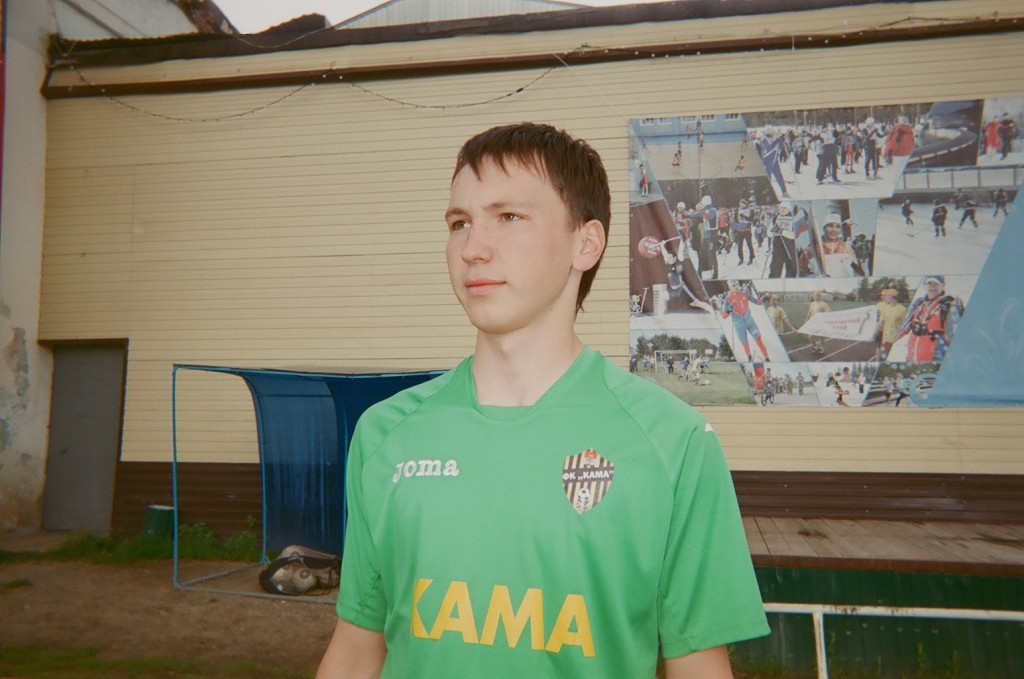 Of the seven towns you went to, which town had the most interesting story?

The most interesting story for me is Degtyarsk, because actually this was a very rare game. Degtyarsk is a mining town where there is a huge mountain of industrial waste left by the mining corporations and that overlooks the pitch. The stadium has been out of use for a long time. They don’t have a local team. But before elections in September they arranged a game for a local team named “Gornyak” against the team from the nearest town.

For two years I tried to get into the stadium to photograph a game, but there never were any games. But this time the local authorities told me about this upcoming game. I was a guest visitor for this match, and they even gave me a microphone. They announced that I was from Moscow and that I would take group portraits of the local team. Everything was arranged to support the right candidate in the election! Politics is very much linked with sport. If you look up the 10 richest Russian businessmen in the Forbes list, all of them support a sports team like CSKA Moscow or Spartak Moscow, but unfortunately not regional football. 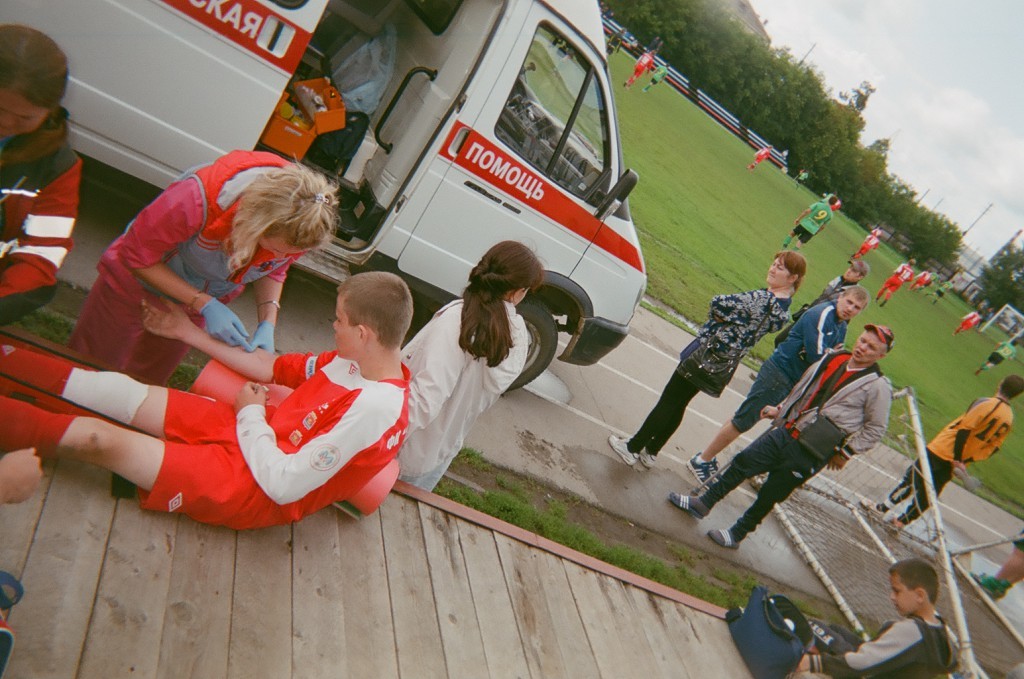 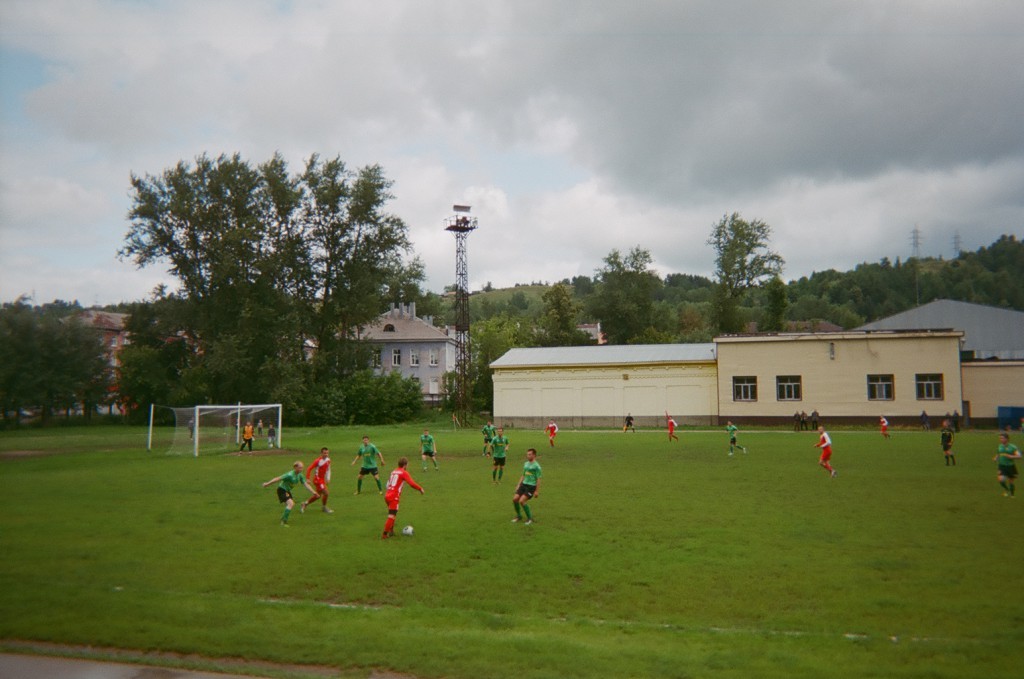 Why is football so important for Russia and Russians?

Traditionally, it is the number one sport in the country, although of course we have no real achievements in football, maybe a 3rd place in the 1960s! Even the Russian football players do not play in the big European leagues anymore.

But in every corner of the country people play football. It is a national sport. The local football team is a means to unite the local community. In a small town on a Saturday and Sunday people do not know what to do—shops, drinking parties and football are the main attractions in the town. It is the same as in other small towns in Europe. 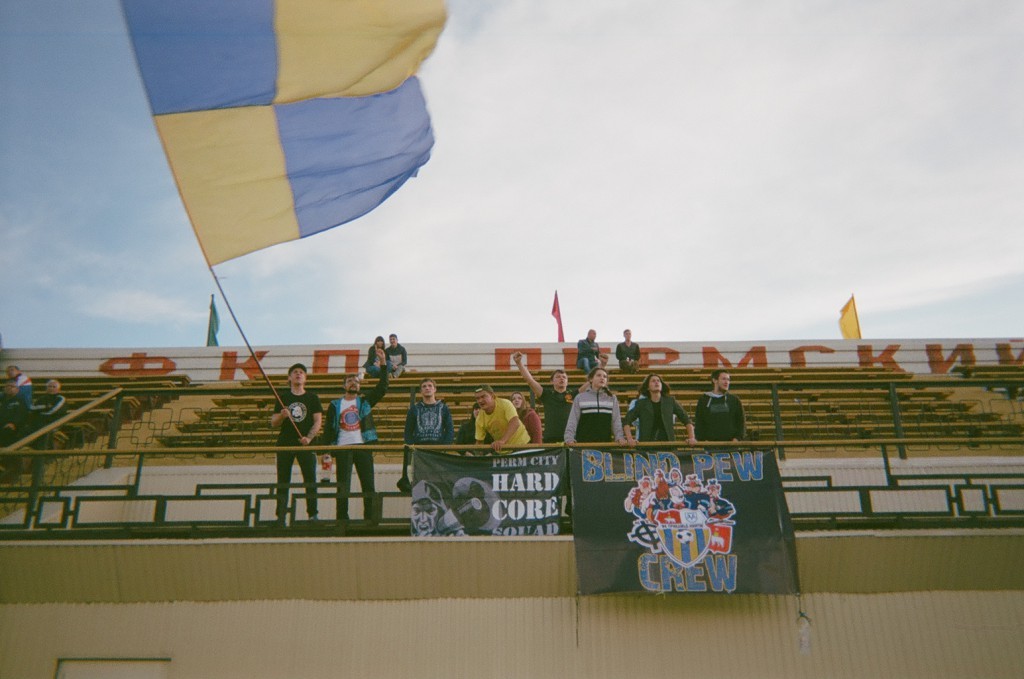 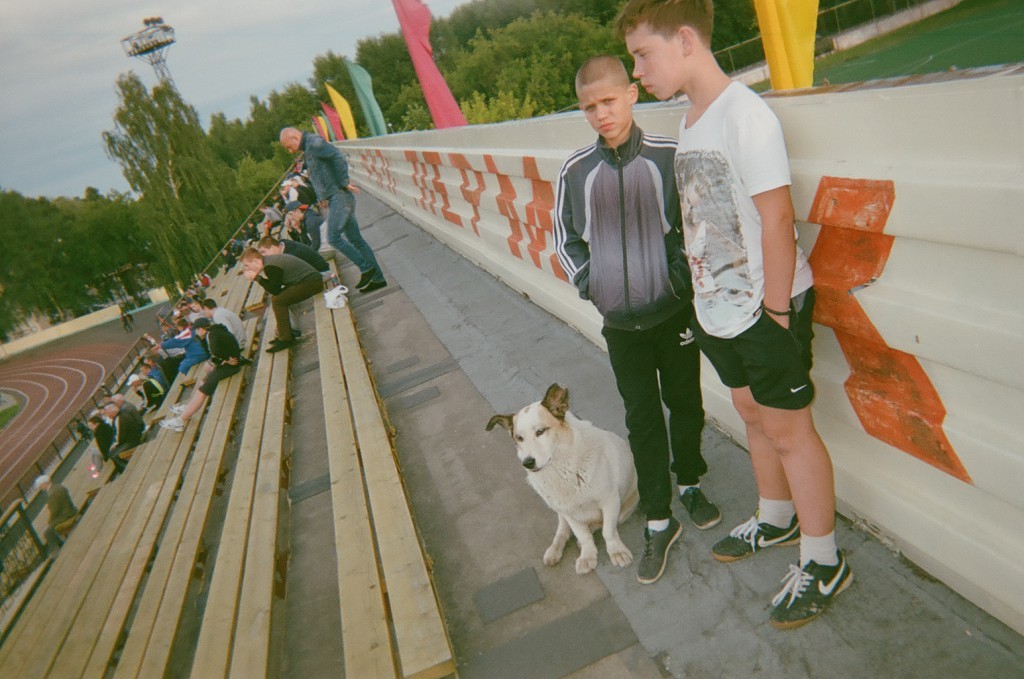 The headlines that come out of Russia usually focus on racism in Russian football. How big a problem is it?

There are of course cases of it, but this is just a minority of the fans. Some teams have an ultra fan base, and these fans support and display some Nazi and nationalist ideas. It is a problem for big teams. The biggest Russian clubs have had to play games without spectators due to the racist chants of some fans. In local stadiums some teams have fans with similar views. It is commonplace.

Is there a good atmosphere at the games?

I have had some conflict with local people in the stadium, usually old drunks. But it is rare. Usually the locals are very kind and open to visitors, ready to talk about the local team and the town. I often ride with the football players on their buses when there is a lack of transport.

In one photo you can see smoke and fires. These fans, the Blind Pew Crew, came to me to ask where I am from and if I am shooting for myself or for the police! They are just a small fan group of this Perm club, but they are good supporters and travel to other towns to support their team. 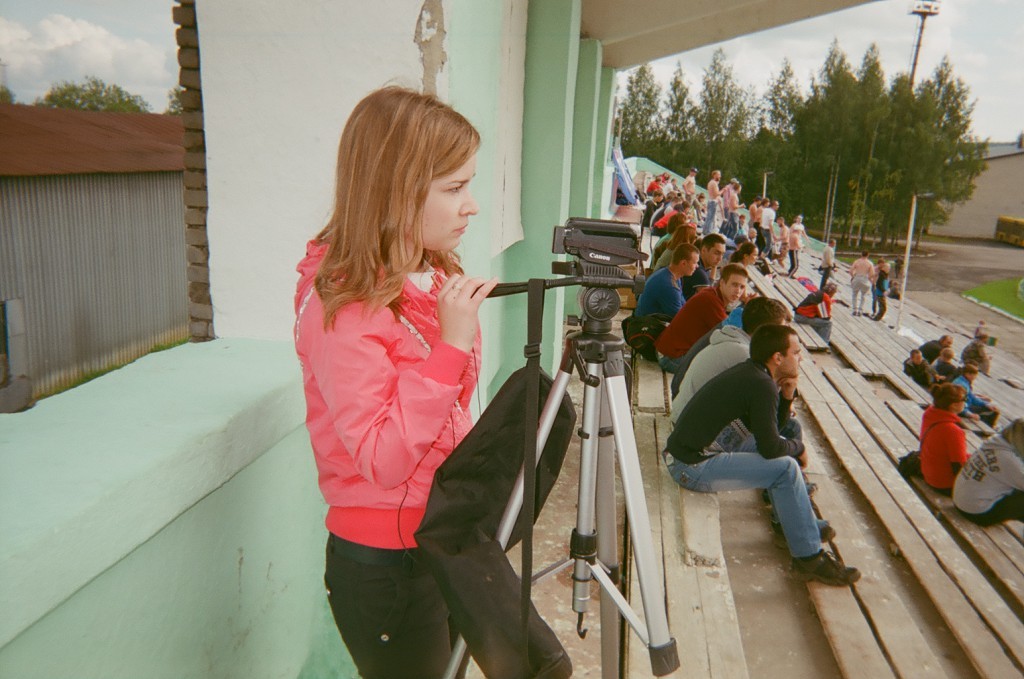 Do you think football can play a part in resolving political issues?

Not sure. It is a tough question with the Crimean football clubs, because Crimea is part of Russia now. Russia has not allowed Crimean football clubs in the Russian Football Federation, because they know if that happens, the Russian clubs will not be allowed to play in the European tournaments. So Crimea is part of Russia, but the football clubs are not. I see football being used as a tool by some political movements, often around elections, and when a businessman supports sport it is good karma for him because people like football and sports.

Goal Click was created in 2014 as a new global football photography project. The ambition of Goal Click is to find one person from every country in the world and send each of them one disposable analogue camera. The photographers take photos that symbolise football in their country, leading to a football photography exhibition and creating a unique football community.

The project aims to show football’s similarities and differences around the world, the issues, the passion and emotions it creates and the way football can unite people in unstable parts of the world. Goal Click is now officially active in over 50 countries, with photos already published from Sierra Leone, India, Iraq, Serbia, Australia and Russia.