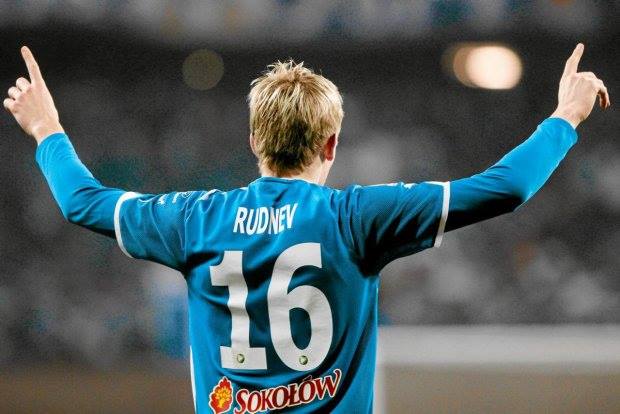 Walking around Mežaparks, a vast green and natural area in Latvia’s capital, one spring afternoon in Riga’s outskirts, I came across footballers undergoing a training session. From a distance they resembled a professional team, all wearing the same uniform under one single badge. Getting closer to these sportsmen, the first spoken words did not sound Latvian at all; in fact, they were speaking in the Russian language. For those not familiar with the Baltic state, it may have been a surprise to learn that this was not an amateur club. It was the Latvian national  football team.

When Marian Pahars was officially presented before the media this summer, the newly-appointed Latvian national football coach answered questions from journalists in his native Russian. This was nothing new for those in attendance, for the Ukraine-born former Southampton striker does not speak Latvian. Pahars, who does understand the language of his footballing nationality, has been taking private lessons as the Latvian Football Federation was very quick to point out.

Such a scenario is rather common in the Latvian football environment, both within the Football Federation and the Virslīga, Latvia’s top football competition; Russian is the main vehicular language.

Just over a year ago, Hamburg striker Artjoms Rudņevs unleashed a nationwide language controversy before a World Cup qualifier between Latvia and Liechtenstein. The first Latvian ever playing in the Bundesliga made the headlines after revealing that he does not need to speak Latvian in order to communicate with journalists (he does so in Russian, Polish or English); openly admitting that he does not plan to learn Latvian, although he, like Pahars, understands the language to some degree.

Many saw Rudņevs’s words as a lack of respect for the country, including Latvian national team captain Kaspars Gorkšs, who publicly reprimanded the striker with an open letter that he shared with supporters. The majority of football fans in Latvia echo the sentiments of Gorkšs. However, this was not the first time Rudņevs, originally from Daugavpils – a city with one of the largest Russian communities in Latvia -caused a stir. When playing for Lech Poznan, the Latvian forward had his surname written on his shirt without an “s” at the end, a clear reference to his Russian origin.

The discontent felt by so many Latvians about this particular case ran deeper than football; it was considered a reminder of Russian influence in the small Baltic state – something many were delighted to see the back of in the early 1990s.

An Awkward Conjugation – The Russian Legacy

Latvia is a country that has had a presence of a large Russian ethnic community over the last two centuries. Such a demographic feature took special relevance during the times of the USSR (1940-1991) and has been one of the main social and political issues in public debate since the country regained its independence in 1991.

Such a historical context has led to a very peculiar situation in the main metropolises of the country. According to the latest census, carried out in 2011, the Russian community accounts for 26.9% of Latvia’s population. However, such figures substantially increase in cities like the capital Riga (40.21%), Daugavpils (53.6%) and Jūrmala (35%). Over the years, this has become one of the most sensitive public issues in the small Baltic country, as this newly-independent country has sought to strengthen its own identity through language and culture.

In this context, Latvia regards its native language as a powerful tool to sustain their identity pursuit, but the fact that many professional footballers, including those who represent the country at international level, do not speak this language contributes little towards national identity construction. Inciting further disapproval, local media were reported to have spotted national players such as Oļegs Laizāns and Vitālijs Astafjevs, who currently holds the European record for the most international matches played with 167 caps, walking around the streets of Riga with Russian t-shirts and caps. 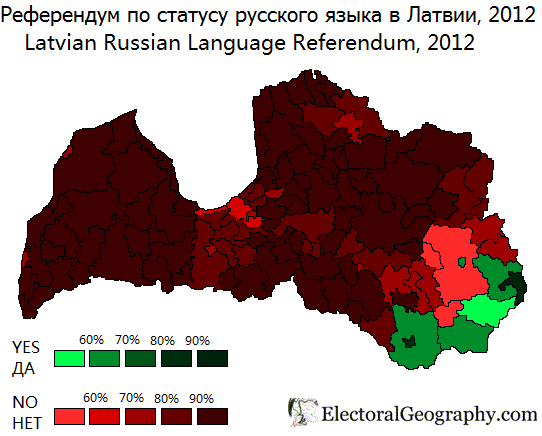 The debate hit its zenith on 18 February 2012, when after a long campaign carried out by pro-Russian social movements and political parties, the country held a constitutional referendum on whether or not to give Russian language the condition of Latvia’s second official language. The referendum’s question was: “Do you support the adoption of the Draft Law “Amendments to the Constitution of the Republic of Latvia” that provides for the Russian language the status of the second official language?”

However, these results were not without controversy; a large part of the Russian speaking community in Latvia (290,660 or 14.1% of Latvia’s entire population) could not vote in this referendum for since 1991, a significant portion of the population exists without recognised citizenship and thus have no right to vote. The aforementioned numbers also show that those non-citizens could not have changed the result of the referendum even if they had been allowed to vote. If all 290,660 members of the Russian community had participated and voted in favor of the motion, the proposal would still have been rejected with 59.15% against and 40.60% in favor with turnout increasing to 75.68% from 71.11%.

In this context, football is just one example of the longstanding concern that the use of the Russian language still represents somewhat this small Baltic country on the international stage.

Many point the finger at the Latvian Football Federation (LFF) for failing to prevent this issue from escalating. The LFF did, however, conduct a “Latvian language experiment” of sorts in the 1990s with its former coach Jānis Gilis, Latvia’s first general manager of the national team after the country regained its independence. Gilis (1991-1997) tried to establish Latvian as the vehicular language within the national team; however, after barely 6 months the plan was abandoned because too many players did not understand the manager’s instructions. Since then, the LFF and its managers have opted to use Russian, with the exception of Englishman (and current Yeovil Town manager) Gary Johnson’s tenure between 1999 and 2001, in which the global lingua franca, English, was utilised. 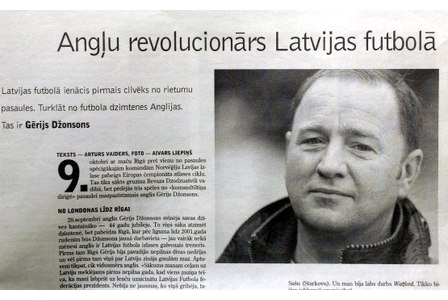 The English revolution in Latvian football: Former Latvia coach Gary Johnson had the players speaking neither Russian nor Latvian

Traditionally, Latvians have tended to take up sports like ice hockey, basketball, or more recently floorball, among others, relegating football to a mere secondary option; the large ethnic Russian community however opt for football. Football is not among the most popular sports in the country as clearly shown in the low attendances at Virslīga games, which average between 100 and 150 fans. There are historical reasons also that have shaped the current situation; Riga, for instance, was one of the few major cities in the Soviet Union that never had a representative in the Soviet Supreme League, despite Daugava coming close in 1985, finishing top of the Soviet First League (second tier) yet still missing out on promotion.

Even the national team draw paltry crowds at their home games at Skonto Stadions, an infrastructure that can officially seat 10,000 fans. This was highlighted at this year’s World Cup Qualifying match against Bosnia, when 6,000 supporters travelled to the game from the Balkans whilst only 2,000 local souls appeared.

An additional problem is that the football environment in Riga has lacked invigoration, with few emerging players managing to break up the now-stale Latvian national team, which has regressed badly since the glory of qualifying for Euro 2004. 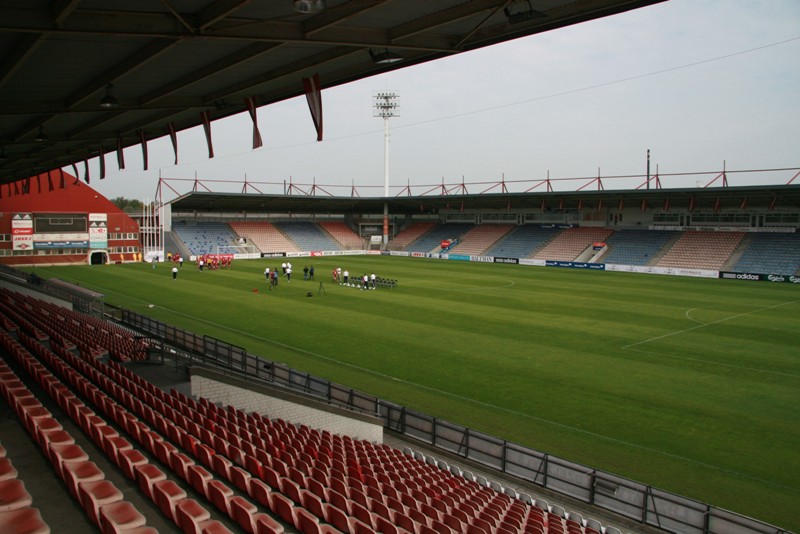 Meanwhile, the Virslīga has seen an increasing arrival of South American and African players, among others, in the last few years; even those players are speaking some Russian words on the pitch from day one. The lack of competitiveness in the domestic league and the fact that many of these players see the Virslīga as a stepping stone in their careers also plays a role in the current language debate. The leagues of Russia and Ukraine are frequently the ideal next destination for these players, for which learning Russian improves their chances of realising this ambition.

Gilis’s experience is now distant and largely forgotten, and it may now be time for the LFF to make a fresh move towards reinforcing the use of Latvian language in football. After all, this is a very different generation from that of the early 1990s. Unlike 20 years ago, in today’s Latvia the Russian language is not nearly so widely spoken among youngsters. In fact, there is one club already staging their own internal “language revolution”: FS METTA/LU is the only club in the domestic league to commonly use Latvian rather than Russian.

While the language topic at club level will never reach the same level as controversy as it has for the national side, local clubs and the LFF can find common ground to implement more effective strategies to address the current situation. Virslīga’s teams should be an essential part of such an ambitious and nationwide plan, but the LFF has to take the first forward step. By doing so, the LFF could indirectly boost football among ethnic Latvians, encouraging them to attend more local (and national) games, with football potentially becoming an integration tool that even the government could benefit from.

The ethnic division of Latvian society has been palpable during the last 20 or so years of independence, and football has clearly suffered from this over the years.  While purists could argue that football is played with the legs and not the mouth, language appears to have been too much of a burden for football to overcome in order for it to reach its full potential in this small Baltic country.

Ruben Martinez is a Spanish sports journalist based in Latvia. He has previously worked in his native Spain, the UK, France, Turkey, Azerbaijan, and Colombia. Recently, he founded with another friend One Nil Up, an English language digital magazine and blog focusing on football in the Baltic States. You can follow them on Facebook (http://www.facebook.com/onenilup) and twitter (@one_nil_up and @rubenmardom)