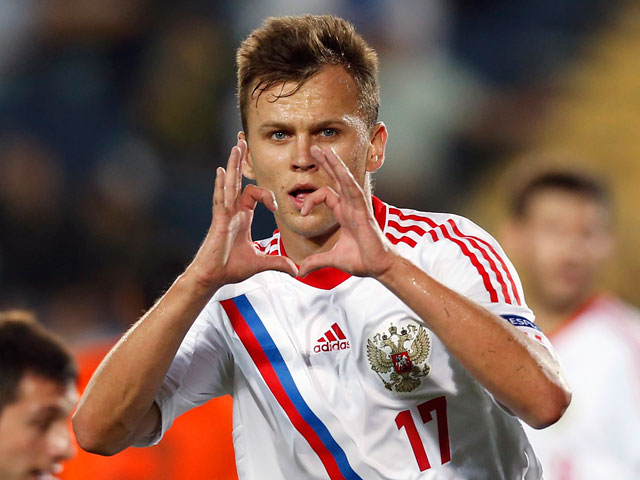 Sbornaya – What Would Best Call be for Cheryshev and Russia?

The countdown to Euro 2016 is now well and truly on, with 19 of the 23 spots available in France next summer – outside of the hosts – having been filled.

Russia have their tickets booked to the continental showpiece – with a run of four victories to end their qualification campaign, including a priceless 1-0 win over Sweden, carrying them into second spot in Group G.

Outings at three successive major tournaments is not to be sniffed at, especially as the next one on the calendar is the big one – with the World Cup heading to their shores in 2018.

There is, of course, a lot of water to pass under the bridge before then, with it important that focus remains locked on short-term targets.

That will be the case from here on in for those looking to generate positive results on and off the field, with international football betting markets when this article was produced pricing Russia around the 66/1 mark to go all the way in European Championship competition.

If they are to make a mockery of a pre-tournament standing as outsiders for the crown, then they will need key men to be on top of their game, with it vital that momentum is established through the taking in of regular competitive outings.

That is not too much of an issue for many, with Leonid Slutsky having inherited a squad unlike most others in that its roots are firmly planted on home soil – with every member of their 23-man travelling party for the 2014 World Cup having played their club football in their homeland.

Only one blot remains on the copybook, one overlooked for Brazil, but it is an important one.

Denis Cheryshev may be living the dream of many, as he finds himself on the books at Real Madrid, but his spell in the Spanish capital has turned into something of a nightmare.

As is often the case with Real, players are drafted into their academy system with the intention of keeping them out of the clutches of a rival—with those breaking through having to be something rather special if they are to infiltrate the ‘Galactico’ policy still in place at the Bernabeu.

Cheryshev falls into that bracket in many ways, as an old-fashioned winger with a direct approach to the game and pace to burn, but he is yet to be offered the minutes he needs in Madrid in order to fulfil his potential there.

Taking that into account, he finds himself at a career crossroads.

He has to have one eye on next summer, and knows he cannot expect to produce his best on that stage if deprived of time under the spotlight in the build-up.

CSKA Moscow have been credited with holding an interest, which would complete the Russian quota again of home-grown talent, but progress through a tough Champions League group may be required to keep them in the mix.

Liverpool have also been heavily linked with Cheryshev for some time, and Jürgen Klopp is said to be looking in his direction again as he seeks to bring energy and creativity to the attacking unit he has inherited at Anfield.

The 24-year-old would be well advised to consider all of his options in the build-up to the New Year transfer window, with it important that the right call is made at this juncture if a man who could be a star turn in 2016 and a Russian icon in 2018 is to scale the heights so many have expected of him.