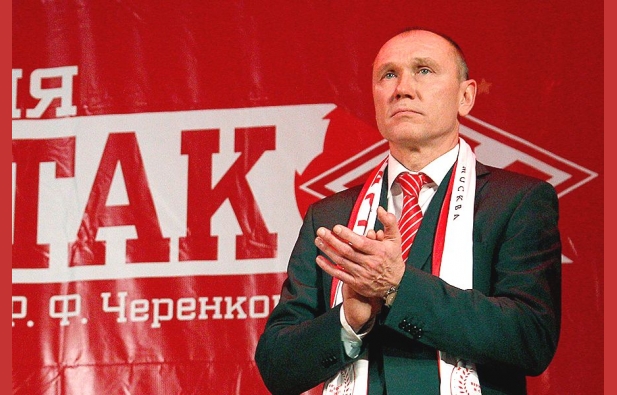 Sergey Rodionov was in many ways a Thomas Müller kind of player – someone who doesn’t stand out for his technical skills but rather for his impressive work rate. Nicknamed the “Elk” Rodionov would often score between 15 and 20 goals a season.

In the late 1980s Rodionov left the Soviet Union to play for the French club Red Star Paris. His time in Paris was fairly unsuccessful, as he failed to integrate well into the French game. Rodionov returned to Spartak in 1993, and was part of the club’s first Champions League campaign. In Spartak’s home group game against Barcelona, Rodionov famously came off the bench, scored a goal and helped Spartak earn a 2:2 draw.

Now, almost 20 years later Rodionov will take over as the new general director at Spartak. While he left a strong legacy as a player, he will attempt to build a new success story at the club. Rodionov’s predecessor, Roman Ashabadze, famously started in the Spartak system as a private chauffeur for some of the players, and worked his way up the hierarchy not unlike José Mourinho at Barcelona.

Ex-players remember that Ashabadze was able to fulfill the players’ wishes, including arranging meetings with female companions. Ashabadze was also in charge of Spartak’s transfers, but his wheeling and dealing meant that many players were brought in under questionable circumstances.

One agent, Mikhail Cherepovsky, represents most of the Spartak squad. Cherepovsky represents all three goalkeepers: Artyem Rebrov, Sergey Pesyakov and Anton Mitryushkin; defenders Sergey Parshivlyuk, Evgeniy Makeev, Vladimir Granat who all play for the national team; as well as forward Pavel Yakovlev. By representing a large percentage of the squad at Spartak Cherepovsky has gained significant influence at the club.

Every year the club is proclaimed as a possible champion. Meanwhile, Spartak’s Premier League season once again ended with great disappointment as the club finished with 10 defeats and only managed sixth place in the Russian Premier League.

Many Spartak fans hope that the new staff will the fortune of Spartak around and have heralded the appointment of Rodionov along with coach Dmitriy Alenichev as a sign of change. First Rodionov may need to get rid of at least 6 or 7 first squad players in order to break the monopoly of player agent Cherepovsky. At the same time he must also rethink the contracts with home grown talents. The famous Spartak academy has not produced a single great player since Yegor Titov 20 years ago.

Rodionov will also have to bring back Roman Shirokov – a 34-year player with disciplinary issues. But on the other hand Shirokov is a classical Spartak playmaker. While the new coach, Dmitriy Alenichev, will have to improve Spartak’s playing tactics, Rodionov will be in charge of repairing the club structure. It’s probably a right time to do so: Spartak won its last title 12 years ago.