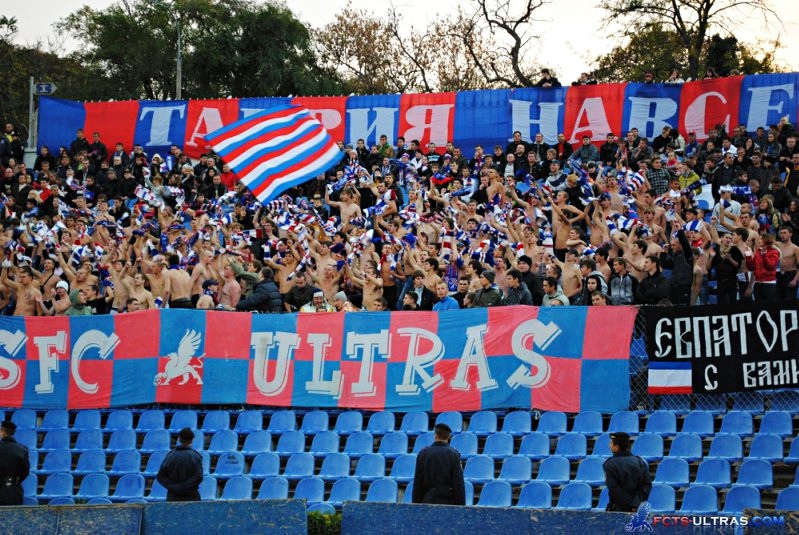 In 1992 the Crimea based club Tavriya Simferopol became the first champion of an independent Ukraine. The club subsequently became a mainstay of the Ukrainian Premier League until the annexation of the peninsula by the Russian Federation in March 2014.

After the annexation Tavriya was dissolved and re-established as TSK (Tavriya Simferopol Crimea) Simferopol, and, along with SK Chernomorskogo Flota (SKChF) Sevastopol, and Zhemchuzhina Yalta, played a handful of games in the third-tier Russian Professional Football League. On August 22, 2014, however, the UEFA Emergency Panel stated “that any football matches played by Crimean clubs organised under the auspices of the Russian Football Union (RFU) will not be recognised by UEFA until further notice.”

All three Crimea based clubs subsequently had to declare bankruptcy and were dissolved. As Sergey Belebeyev from the All-Ukrainian Association of Professional Football Players stated to the BBC Sportshour on March 14 2015: “the situation is difficult as the clubs have now de-facto ceased to exist.”

Now, however, it appears that Tavriya, at least, will rise from the ashes. As the President of the Football Federation of Ukraine (FFU) Andriy Pavelko stated on June 18, Tavriya could be re-established, and, rather than play on the Crimea, could play its home-games in Kherson, which is located in the Dnieper Delta not far from the Crimean Peninsula, has a population of 329,000 and is currently without a professional football club.

Pavelko has since mandated vice-president of the FFU Sergei Kunitsyn, and former president of Tavriya, along with a committee of professional football players to work together with the board of the Ukrainian Premier League to investigate the viability of creating a new club in the region. This process is expected to be concluded by August 31. Pavelko has since stated that the goal is “to revive our legendary club, the first champion of independent Ukraine”

The new Kherson based team would operate as Tavriya Simferopol, and would begin play in the 2016-17 season. The FFU also has plans to return the Ukrainian Premier League to a 16-team format for the aforementioned season, and it appears that the re-incarnation of Tavriya will play a major role in this undertaking.

Formation of the new Crimean Football League was finalized on June 10. According to the Russian press service TASS, the football federations of the Crimea and Sevastopol have named eight participants to take part in the first Crimean Football League, which will start in August. The eight clubs include: Tavriya Simferopol, FK Sevastopol, Rubin Yalta, FC Bakhchisaray, FC Yevpatoriya, Kafa Theodosius, Okean Kerch, and Titan Armyansk.

This could mean that by 2016-17 two clubs could legally claim to be the successor of the original Tavriya Simferopol. With the Crimean incarnation based in Simferopol, and the new Crimean league backed by UEFA, it may be tough for Ukrainian football authorities to establish a clear valid line of ascension for the incarnation that will be based in Kherson.

The idea of using an exiled football team is not new in the post-Soviet space. Spartaki Tskhinvali, which is based in Tbilisi, for example has competed in the Georgian Umaglesi Liga since 2006, and was founded by the Georgian government in order to have a South Ossetian representation in the Umaglesi Liga. It now appears that the FFU might copy the example of Tskhinvali in order to set up a club as a beacon for Ukraine’s loss of the Crimean Peninsula.