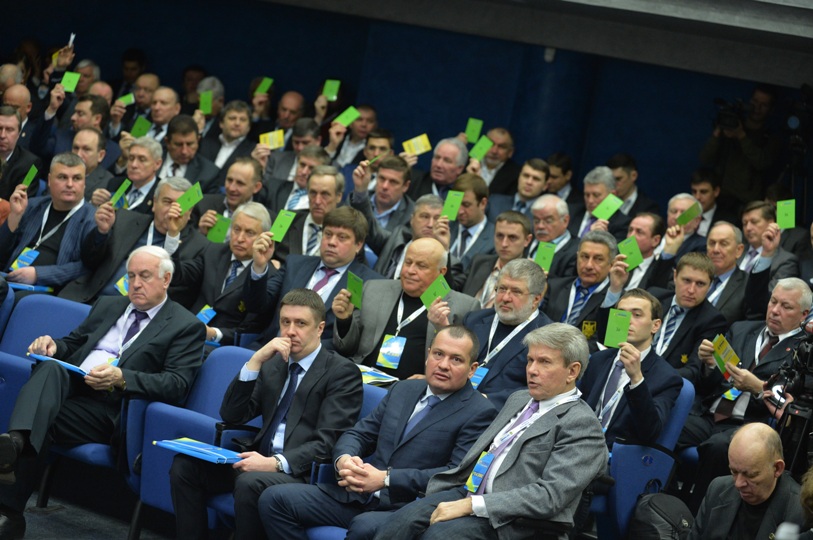 The Battle over the Football Federation of Ukraine

Many in the public expected that Ihor Kolomoyskyi would become the new president of the Football Federation of Ukraine (FFU). On a public opinion poll on Tribuna.com for example 55% of respondents answered that they expected Kolomoyskyi to win the presidency. Instead, however, interim president Andrei Pavelko, who had been running the office since January, was confirmed in his position. For many insiders of Ukrainian football, however, it was not a surprise that Pavelko retained the position.

Pavelko is a native of Dnipropetrovsk, and he successfully campaigned for a seat in the Verkhovna Rada (Ukrainian parliament) as a member of the Bloc Poroshenko party at the last election. The Ukrainian sport portal Tribuna.com has linked Pavelko with Kolomoyskyi and Dinamo Kiev owners Ihor and Hryhoriy Surkis. The Surkis brothers and Kolomoyskyi are not only connected by their Jewish faith, but are also linked through various business deals in what Ukrainian media has termed the Jewish Mafia.

The Surkis brothers and Kolomoyskyi are in opposition to the so-called Donbass-Clan that is centred around Rinat Akhmetov. As reported earlier on Futbolgrad’s Gazeta former FFU president Konkov is firmly positioned in the Akhmetov camp. Konkov’s many political mistakes, in particular his rather passive role during the Crimea Crisis in which he failed to press for hard sanctions against the Crimean clubs playing in the Russian league system, have resulted in Akhmetov being unable to muster enough political support to award the position to another of his political allies. With this in mind, Akhmetov chose not to have one of his candidates run for the position.

This does not mean that Akhmetov has conceded the battle over Ukrainian football to his political opponents. Last week Shakhtar coach Mircea Lucescu spoke out on Shakhtar’s official homepage against the structure of the Ukrainian Premier Liga and the Ukrainian Cup.

Then on Monday came the next round of critiques by the Shakhtar manager when he said to Tribuna: “Clubs from the northern and central regions of Ukraine have a huge advantage over the East”. He furthermore stated that due to the conflict: “clubs representing the northern and central regions have a huge advantage over clubs from the east. There is no such thing as a level playing field.”

The timing right after the FFU presidential elections is fitting. By pointing out Shakhtar’s disadvantage he sets the club up as a victim of the current political climate. It can be expected that Akhmetov’s camp will continue to lament the current leadership of the FFU until it is replaced with someone from the Akhmetov camp. The FFU has therefore become another pawn in the great chess game between the two major clans of the country.